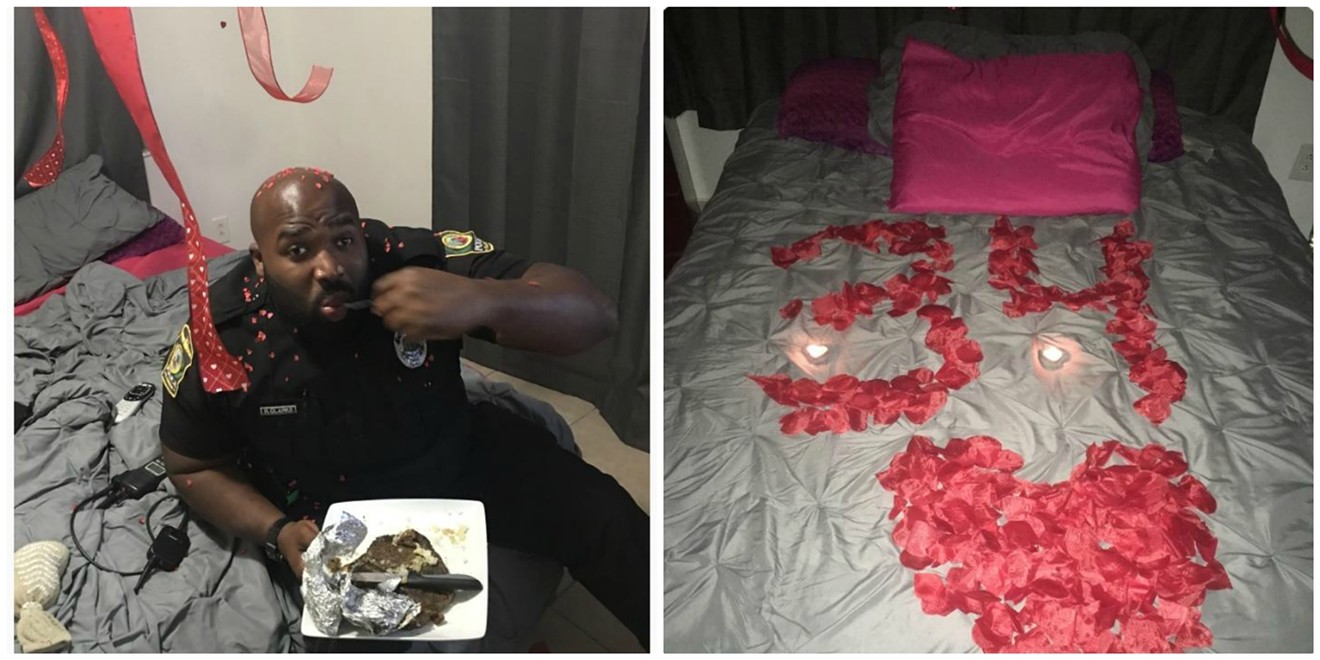 Clarke on his 34th birthday this year. Photos courtesy of anonymous
Earlier this week, New Times reported that the Florida corrections officer who locked a mentally ill inmate in a scalding-hot shower until he died is now working as an officer for the Miami Gardens Police Department, where he has amassed a record of serious violations, including repeated investigations into allegations he was sleeping with women while on duty. The story reignited a national backlash over the fact that Officer Roland Clarke never faced any serious consequences for his role in the death of that prisoner, Darren Rainey.

"The [city] manager has informed me that the officer in question is in the process required by law and collective bargaining before an officer can be officially terminated," Gilbert said in a statement sent to New Times. "The behavior of which [Clarke] is accused, and the poor judgement which he has allegedly shown, is not consistent with the high standards to which we hold all city employees."

In June 2012, Clarke locked Rainey, a 50-year-old schizophrenic inmate who was serving a two-year sentence for cocaine possession, in a shower rigged with temperature controls only outside the cell. Inmates say the shower was used as a form of punishment, and video footage shows Clarke leading Rainey to the shower after the mentally ill man defecated in his cell. By the time Clarke returned two hours later, Rainey was dead and huge portions of his skin were peeling off, visceral photos obtained by the Miami Herald show.

But the Miami-Dade State Attorney's Office never brought any criminal charges in connection with Rainey's death — a decision State Attorney Katherine Fernandez Rundle took five years to announce. In January 2014, Clarke was hired by the Miami Gardens Police Department as a patrol officer.

Clarke's internal affairs file obtained by New Times shows he has been investigated and reprimanded for numerous failures in his four years as a patrol officer. He is being investigated by IA for pursuing a personal, romantic relationship with a woman while he was on duty. He was previously given a five-day suspension for doing the same thing in 2016. He also lost key evidence sought by homicide detectives in relation to a drowning victim's death and crashed his patrol car into another driver after running a red light.

Despite all of this, Clarke was a finalist for the Dade County Police Benevolent Association's Officer of the Year award in 2017. 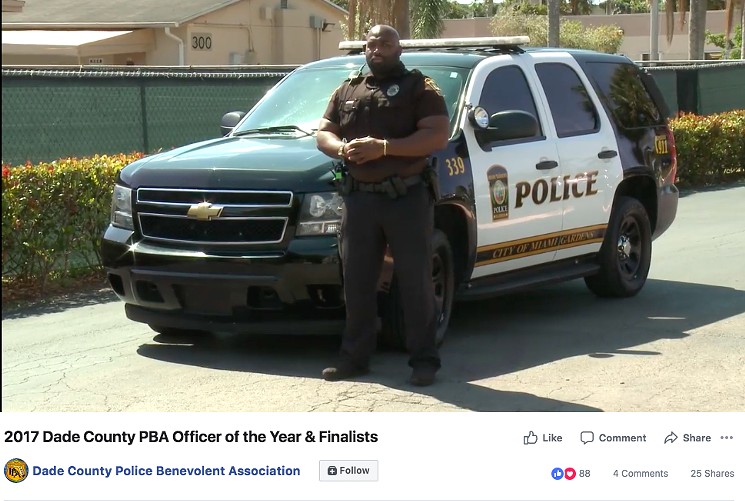 Miami Gardens Police Officer Roland Clarke
Dade County PBA's Facebook Page
Clarke also had a proclivity for sending out questionable tweets, including a rant this past April claiming Bill Cosby is innocent and a series in 2013, when he was still a corrections officer, claiming the cartoon SpongeBob SquarePants is used to push a gay agenda, which he referred to as "that fag shit." Clarke has since deactivated his Twitter account.

Both the City of Miami Gardens and the police department faced backlash after news broke of Clarke's employment with MGPD and his litany of failures.


@CityofMiaGarden
Your employee, officer Roland Clarke, locked a schizophrenic 50-year-old inside a scalding shower for two hours. Screaming. Crying. By the time he returned to let him out, he was dead. So burned that huge portions of skin were peeling off.

@miamigardenspr @CityofMiami @MiamiHerald @MiamiMayor @Miamicom Why is this man still employed as a police officer? He killed a man. He clearly has no respect for the law. He's an embarrassment for Miami Gardens. He's going to hurt others. Make the right decision. https://t.co/L8RjzvRFeG

Gilbert, who stressed he couldn't directly fire Clarke, said he was horrified by the officer's actions.

"As mayor, I have no say in the hiring and firing of police officers. This is handled by our professional city manager through his chief of police," Gilbert said. "The conduct allegedly engaged in by this officer is something any person in our community would find disgusting and distasteful."

Miami Gardens Police Chief Delma Noel-Pratt did not respond to New Times' requests for comment.
KEEP MIAMI NEW TIMES FREE... Since we started Miami New Times, it has been defined as the free, independent voice of Miami, and we'd like to keep it that way. With local media under siege, it's more important than ever for us to rally support behind funding our local journalism. You can help by participating in our "I Support" program, allowing us to keep offering readers access to our incisive coverage of local news, food and culture with no paywalls.
Make a one-time donation today for as little as $1.