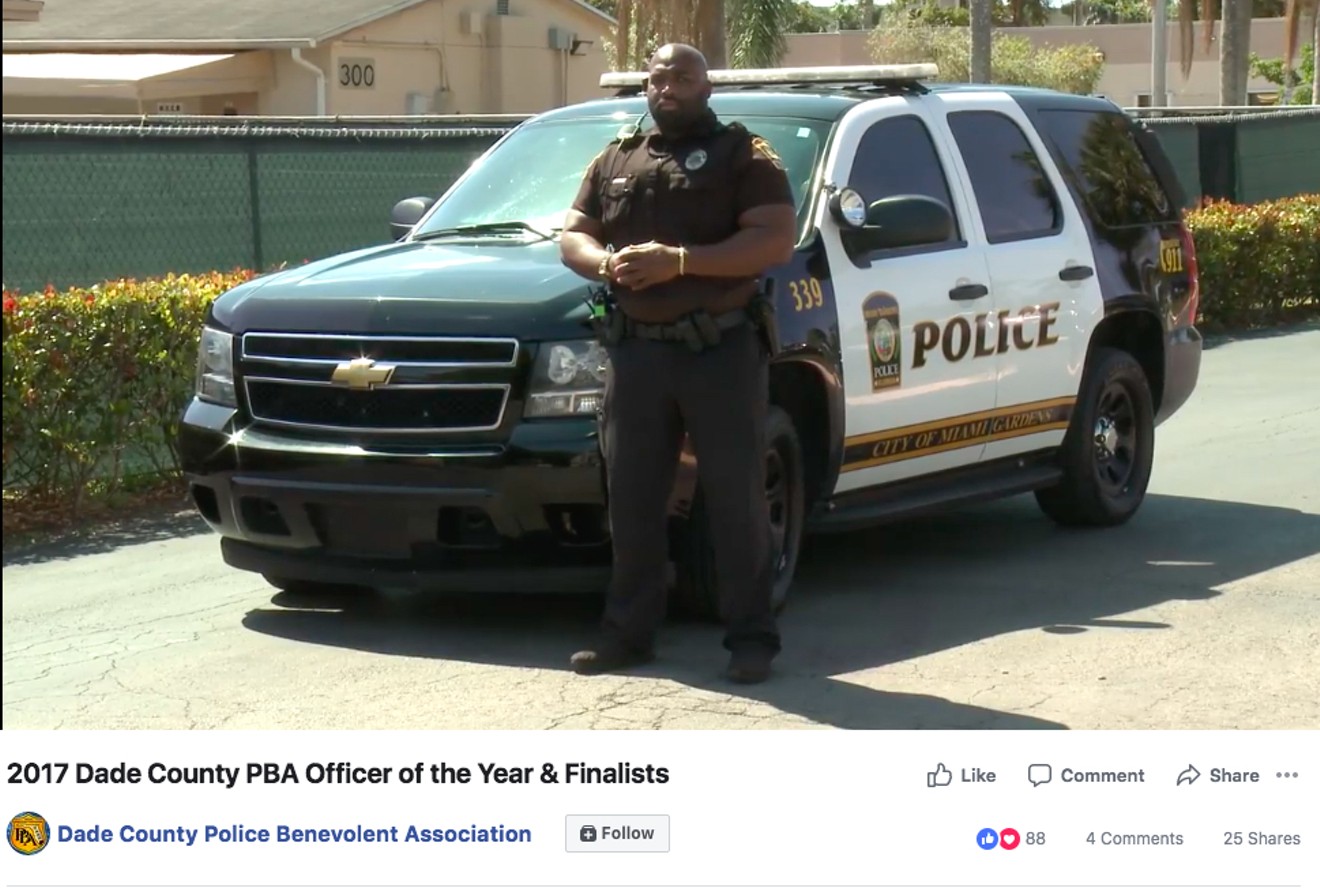 Miami Gardens Police Officer Roland Clarke Dade County PBA's Facebook Page
On June 23, 2012, Florida Corrections Officer Roland Clarke locked inmate Darren Rainey in a shower with scalding-hot water as punishment for defecating in his cell. Clarke and his colleagues left the schizophrenic 50-year-old, who was serving a two-year sentence for cocaine possession, screaming inside the shower for two hours. By the time they returned to let him out, he was dead. An autopsy revealed Rainey's body had been so badly burned that huge portions of skin were peeling off.

Clarke resigned as a prison guard in July 2014 after a Miami Herald investigation into Rainey's death raised an international outcry. Prosecutors later declined to charge the guard with a crime, though, and he quickly found work with the Miami Gardens Police Department as a patrol officer.

It didn't take long for Clarke to start breaking the rules there too.

An internal affairs (IA) file obtained by New Times shows Clarke has been investigated by his department's IA unit twice for having inappropriate relationships with women while on duty. In the first case, Clarke was suspended for five days in 2016 after investigators found he'd been visiting a woman at her house while he was on the job — though that infraction didn't stop him from being a finalist for the 2017 Miami-Dade County "Officer of the Year" award.

Now internal investigators are looking into a second, nearly identical allegation, according to emails reviewed by New Times. Audio, photos, and text messages appear to show Clarke again visiting a woman at her home while on duty and in uniform, and even having sex with her on multiple occasions.

Clarke didn't respond to messages sent to his MGPD email address. Bridgett Hodges Harvey, an attorney representing him in his divorce case, also did not respond to emails or phone calls. Said Miami Gardens Police spokesperson Carolyn Frazer: "He is under investigation right now." She declined to discuss the case in more detail because the investigation is ongoing.

It's just the latest case against Clarke since he joined the force in Miami Gardens in January 2014. Before the probes into his sexual activities on the job, he was cited for running a red light in his police truck and crashing into a driver who had a green light. In March 2016, he was reprimanded again, this time for calling a tow truck to pick up a car that belonged to a drowning victim without first securing a cell phone and wallet inside — both of which disappeared before homicide investigators could obtain that important evidence.

Clarke's first complaint involving sexual relationships at work was filed September 11, 2016, when Miami Gardens Capt. Stacey Rovinelli received a tip alleging the officer, while on duty and in uniform, had repeatedly visited a woman named Kameisha Douglas at her house. But Clarke's department apparently already knew about his dalliances when he was supposed to be working.

His internal affairs file shows that a month before that complaint, on August 14, he had been warned by a captain and two sergeants to stop "pursuing personal relationships while at work." The new tip, though, contains evidence he didn't heed that warning: Three photos taken around 1 a.m. September 7, 2016, show Clarke in uniform with Douglas outside her home. The two are seen touching and kissing, but Clarke was supposed to be patrolling another part of town.

At the time the photos were taken, Clarke had been married for two years. 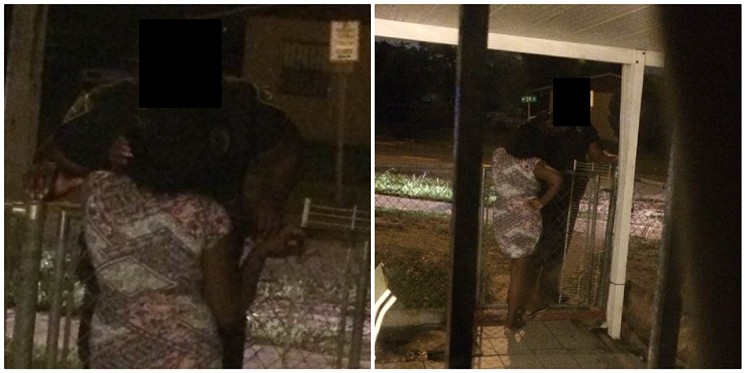 Photos of Clarke with Douglas (MGPD obscured Clarke's face).
From Clarke's internal affairs file
When IA talked to witnesses, they told investigators that they had seen Clarke spend one or two hours at the woman's house while in uniform several times and that he had allowed Douglas to sit in his patrol vehicle.

Confronted by IA, Clarke admitted to "visiting Ms. Douglas at her residence about four times while he was working." Douglas' residence was not in the area Clarke was assigned to patrol. He also admitted that he met the woman "while... at work" and that they "had relations," but he insisted he "never had relations with Douglas while on duty."

Asked whether Douglas had ever been inside his patrol vehicle, Clarke said, "Once." But when Captain Rovinelli asked why, Clarke changed his story. He said, "She never sat inside; she looked in it because I went to get something — I — I put my vest on."

Douglas initially agreed to speak with IA but later backed out. Contacted by New Times, Douglas said she had never been inside Clarke's police car and had never had sex with him while he was on duty.

Despite those denials, on November 18, 2016, IA determined Clarke had violated the code of conduct by pursuing a personal relationship while on duty and outside his primary area of coverage. But he was given only a five-day suspension.

Others let Clarke off the hook. On March 17, 2017, nearly five years after Darren Rainey was boiled to death in the shower, Miami-Dade State Attorney Katherine Fernandez Rundle's office finally closed its investigation into his brutal killing. The office reviewed footage showing Clarke leading Rainey past other showers and into the one that other inmates said was specially rigged so guards could adjust the temperature outside the locked stall as punishment.

But Rundle cited inconclusive autopsy reports — which were later debunked by experts interviewed by the Herald — and concluded Rainey's death was an accident caused by complications of mental illness and his "confinement in a shower."

Emails show the investigation into Clarke's most recent alleged malfeasance has been in progress for at least two months.

According to the new allegation, about eight months after Rundle's decision, Clarke began the second inappropriate relationship with a woman while on duty. Clarke's wife — who asked not to be identified in this story because she works as a corrections officer and faces threats of retaliation — says the other woman told her the relationship began last November 24, when Clarke followed her around a BrandsMart store in Miami Gardens while in uniform. He asked for her phone number, which she gave him, and that evening showed up at her house despite her not giving him her address.

In the coming months, the woman said, Clarke showed up repeatedly at her home while he was on duty and in uniform. Texts and photos she later shared with his wife appear to support those allegations — including two remarkable photos she says were taken the night of Clarke's 34th birthday, January 6, 2018, when Clarke posed with a steak dinner on a bed strewn with flowers while he was in uniform and allegedly on duty: 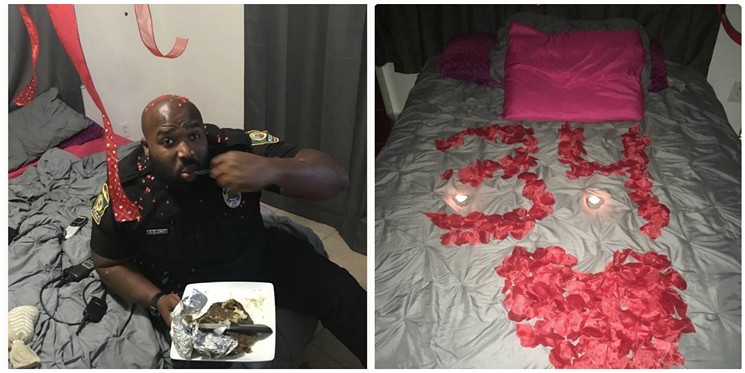 Clarke on his 34th birthday this year.
Photos sent to Clarke's wife
Clarke's wife, who has since filed for divorce, says she was first contacted in March by the woman, who told her she and Clarke had been carrying on an affair. The woman sent photos of him to his wife, and then, on July 25, left a flash drive with an audio recording of the cop on the windshield of her car.

The audio seems to show Clarke bragging about getting off the hook for his repeated transgressions. Clarke's wife tells New Times she's certain the man on the recordings is her husband.

In the recording, Clarke appears to complain about the woman he had been seeing and who turned him in to IA: "Look what my side bitch did to me," he says in the recording. "That bitch tried to get me fired. 'Cause she know I can't come 'round there acting crazy with her 'cause I'm an officer, so this ho called anonymously, saying, 'This n**** be coming to my house and fucking me on duty.'"

In the audio, Clarke apparently brags about other officers in the department bailing him out of trouble.

"It's a good thing [another officer] had my back up there," Clarke continues. "[He] got word to me through [another officer], like, 'Hey, stop going to that girl's house and fucking on duty, 'cause she called anonymously... They took care of that shit, that shit didn't go nowhere.'"

When New Times called a phone number belonging to the woman who alerted Clarke's wife to her affair with him, the woman at first acknowledged the IA investigation and then became irate, saying she had no idea who Roland Clarke is. She hung up, called back from the same number, introduced herself as a different person, and said never to call again.

Clarke has pushed back against his wife in court. He obtained a temporary restraining order against her September 18 after alleging she threatened him and left him in fear for his life. She denies those claims. A hearing on the order is set for October 17, at which point the temporary injunction will expire if he does not show up. (Court records also show Clarke's wife was arrested for battery in 2010 in an incident involving her first husband. She pleaded not guilty, and prosecutors dropped the case.)

As IA investigates the new claims against him, Clarke remains on the force in Miami Gardens. And while he and his fellow guards are off the hook for Rainey's death, Florida taxpayers aren't. Earlier this year, Rainey's family settled a civil lawsuit against the state, Clarke, and others for $4.5 million.

Clarke hasn't kept a low profile online since joining Miami Gardens Police. Although the department requires its officers to "behave in a manner, both on and off duty, which will not bring discredit to themselves or the department," he has repeatedly tweeted questionable opinions.

This past April, he went on a Twitter rant about the Bill Cosby rape case, declaring, "I would act way worse than Cosby if I was wrongfully convicted of a crime and then accused of being a flight risk... I would be shot in court. I'm not going in a cage when I know I'm innocent. Kill me right here, but I'm choking this prosecutor first." 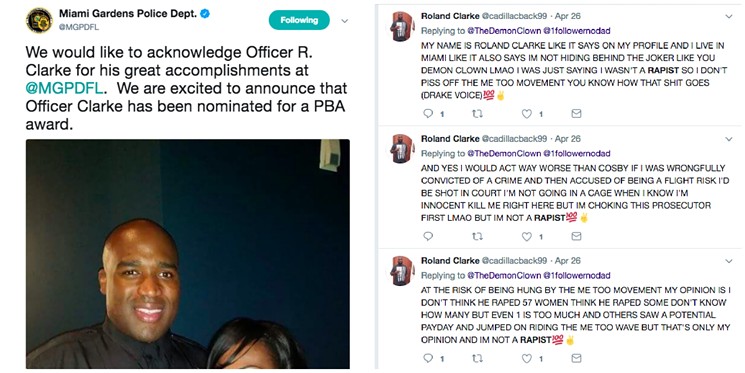 Screenshots of MGPD's tweet praising Clarke (left) and his Twitter feed.
Twitter
KEEP MIAMI NEW TIMES FREE... Since we started Miami New Times, it has been defined as the free, independent voice of Miami, and we'd like to keep it that way. With local media under siege, it's more important than ever for us to rally support behind funding our local journalism. You can help by participating in our "I Support" program, allowing us to keep offering readers access to our incisive coverage of local news, food and culture with no paywalls.
Make a one-time donation today for as little as $1.