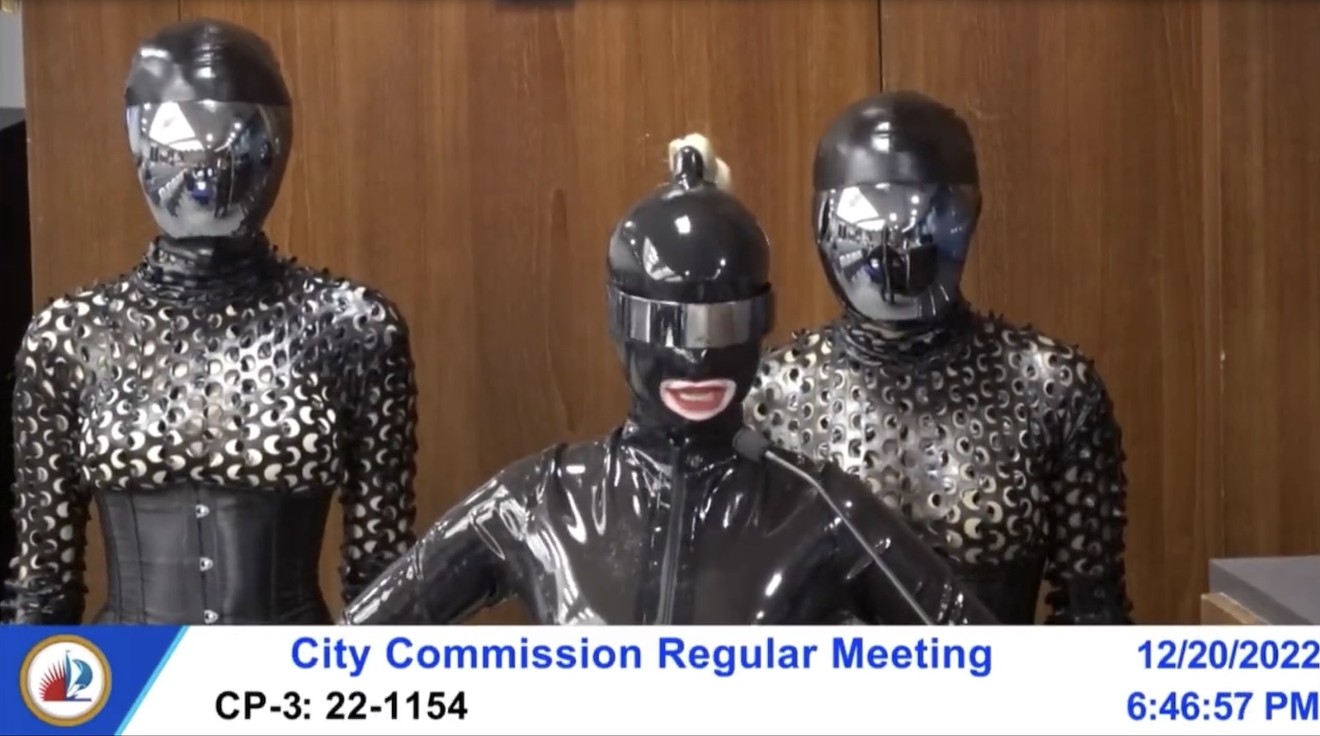 “Good evening, councilpeoples. You may call me Mistress," the one in the middle greeted officials.

"Mistress" — sporting a shiny silver suit, futuristic monobloc glasses, and candy-apple-red lipstick — proceeded to explain why she and her Daft Punk-doppelgänger cohorts were there: to propose that the commission set aside a chunk of the nearly $1 million allotted in a recently approved yard-waste-processing plan to fund a "sex dungeon" in Broward County. The two women behind her stood silently as she spoke.

“I propose that you use a quarter of that [million] to support doms and subs in Broward County to build a dungeon created for us, by us, the taxpayers and voting citizens," said Mistress.

She concluded by telling officials: "I look forward to spanking each and every single one of you at the new esteemed dungeon. You are dismissed."

“OK, thank you," replied Mayor Dean Trantalis with admirable aplomb. "And happy holidays to you.”

The pre-holiday antic, which portended a very naughty Christmas in the Venice of America, was unusual even by South Florida standards. In response to a video of the proceeding, a number of users on social media raised the very reasonable question: "Is this real?"

While it did in fact transpire, it appears the women were not there for their own pleasure, but as part of a marketing stunt for a new fetish nightclub opening in Miami.

Earlier this month, a press release announced the club's opening at the site of the former Pink Pussycat, the storied Miami strip club that shuttered earlier this year. Krave describes itself as a "sexy interactive circus" and performance venue.

"If you have a fear of nudity, spankings, clowns, whips, ticklings, peanut butter, or TIK TOK, do not attend," reads a disclaimer on the club's website.

Reached by phone, "Mistress Mikki" from Krave whispered to New Times that they could neither confirm nor deny whether the trio at the meeting was linked to the club.

Mistress simply reiterated Krave's mission: to create a space that welcomes everyone and to promote women-owned strip clubs.

"It's time for women to take over strip clubs," she adds.
KEEP MIAMI NEW TIMES FREE... Since we started Miami New Times, it has been defined as the free, independent voice of Miami, and we'd like to keep it that way. With local media under siege, it's more important than ever for us to rally support behind funding our local journalism. You can help by participating in our "I Support" program, allowing us to keep offering readers access to our incisive coverage of local news, food and culture with no paywalls.
Make a one-time donation today for as little as $1.