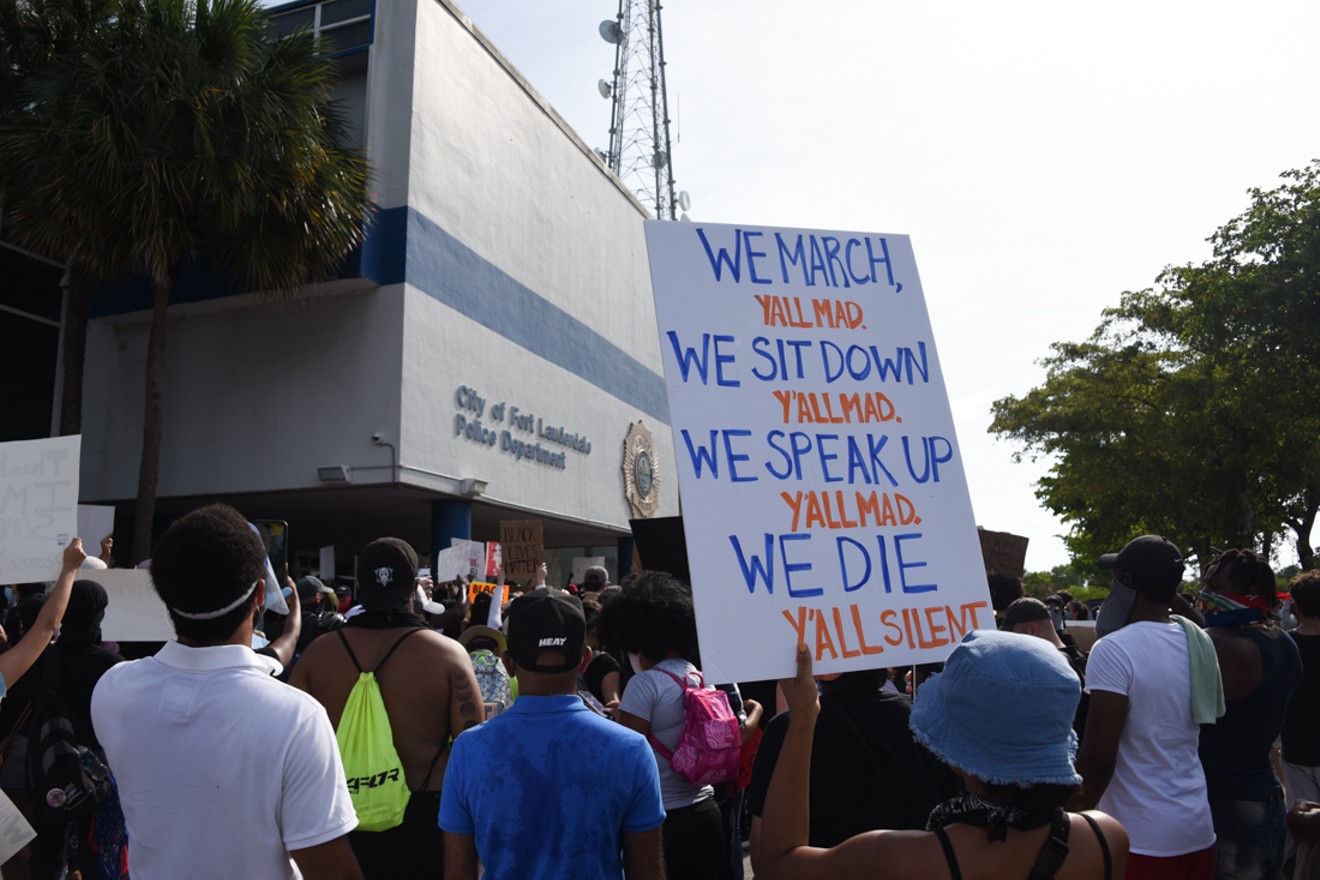 Florida Gov. Ron DeSantis pushed through an "anti-riot" bill after 2020's Black Lives Matter protests. Photo by Michele Eve Sandberg
Update published 9/1/2022: After hearing arguments that Florida's anti-riot act was infringing on the rights of free speech and protest in the state for people of color, the United Nations Committee on the Elimination of Racial Discrimination (CERD) has issued a report stating that the legislation, backed by Gov. Ron DeSantis, restricts the international right to peaceful assembly.

"The Committee is concerned about reports of increasing legislative measures and initiatives at the state level that unduly restrict the right to peaceful assembly following anti-racism protests in recent years, such as the HB1 Combating Public Disorder law in Florida,” reads the CERD report, released on Tuesday, August, 30.

The State of Florida is not required to take any actions based on the report, but the U.S. must address issues related to peaceful protests by the time of the nation's next report to CERD in November of 2025.

Civil-rights groups from Miami and Jacksonville traveled to Geneva, Switzerland, to argue before CERD that the Florida law violates the terms of an international treaty by chilling dissent from Black and brown communities that speak out against racial injustice.

A group of Florida civil-rights attorneys flew to Switzerland this week with a mission: to tell the United Nations (UN) about Florida's so-called anti-riot law, which they say violates a long-standing international treaty against racial discrimination.

After racial-justice protests swept the country and the world in 2020, numerous states, including Florida, passed laws that broadened prohibitions against civil disobedience.

The Act, pushed through the legislature and signed into law by Gov. Ron DeSantis in April 2021, broadened the definition of an illegal "riot," criminalized the act of blocking roads in protest, increased penalties for people found guilty of rioting and made it more difficult for municipalities to lower their police budgets.

In a report filed with the UN Committee on the Elimination of Racial Discrimination (CERD), local civil-rights groups, including the Community Justice Project (CJP) and Dream Defenders, claimed the bill effectively discourages people from protesting for fear of being arrested or worse.

"Under…HB 1, Dream Defenders fears when disruptions by agitators happen again, rather than protect those exercising their First Amendment rights, police will be emboldened to respond with mass arrests of protestors or even physical force. This has made members afraid to participate in demonstrations," the groups write in a report entitled, "Chilling Public Dissent."

Reached by New Times via email, DeSantis spokesperson Christina Pushaw sent a statement asserting the law was passed to give law-enforcement agencies the ability to quell riots in the interest of safety.

"Peaceable assembly and free expression are respected in Florida, with countless protests and demonstrations for various political groups and social causes organized around the state on a daily basis. However, there is no constitutional right to political violence," Pushaw writes.

The civil-rights groups claim the law violates provisions of the International Convention on the Elimination of All Forms of Racial Discrimination, an international human rights treaty that dates back to the 1960s and ostensibly guarantees all people a right to peaceful assembly regardless of race, color, ethnicity, or national origin.

Though civil-liberties groups promptly sued DeSantis over the law in the U.S., CJP attorney Denise Ghartey, who is in Geneva along with fellow activist Ben Frazier of the Northside Coalition of Jacksonville, says bringing the fight to the UN is another prong in an effort to get the law overturned.

"We're here to present what’s been going on in Florida pertaining to HB 1 and talk about its racist nature and the threat to freedom of speech the legislation poses on Black and brown communities in Florida," Ghartey tells New Times. "If they're not gonna listen to us on U.S. soil, we need to speak on the world stage."

Ghartey and Frazier are addressing CERD all week in hopes that the international committee will urge the U.S. government to repudiate anti-protest laws and get the Florida legislature to repeal HB 1.

"We are saying that the state of Florida and governor have launched an all-out racially discriminatory attack on Black people and trying to turn back the hands of time, turn back the progress of the civil rights movement," Frazier said in a press release. "So we are asking the international body to take a closer look at what the governor is doing."

This year's CERD session ends on August 30, when the committee will issue its conclusions and recommendations to the U.S. delegation.
KEEP MIAMI NEW TIMES FREE... Since we started Miami New Times, it has been defined as the free, independent voice of Miami, and we'd like to keep it that way. With local media under siege, it's more important than ever for us to rally support behind funding our local journalism. You can help by participating in our "I Support" program, allowing us to keep offering readers access to our incisive coverage of local news, food and culture with no paywalls.
Make a one-time donation today for as little as $1.