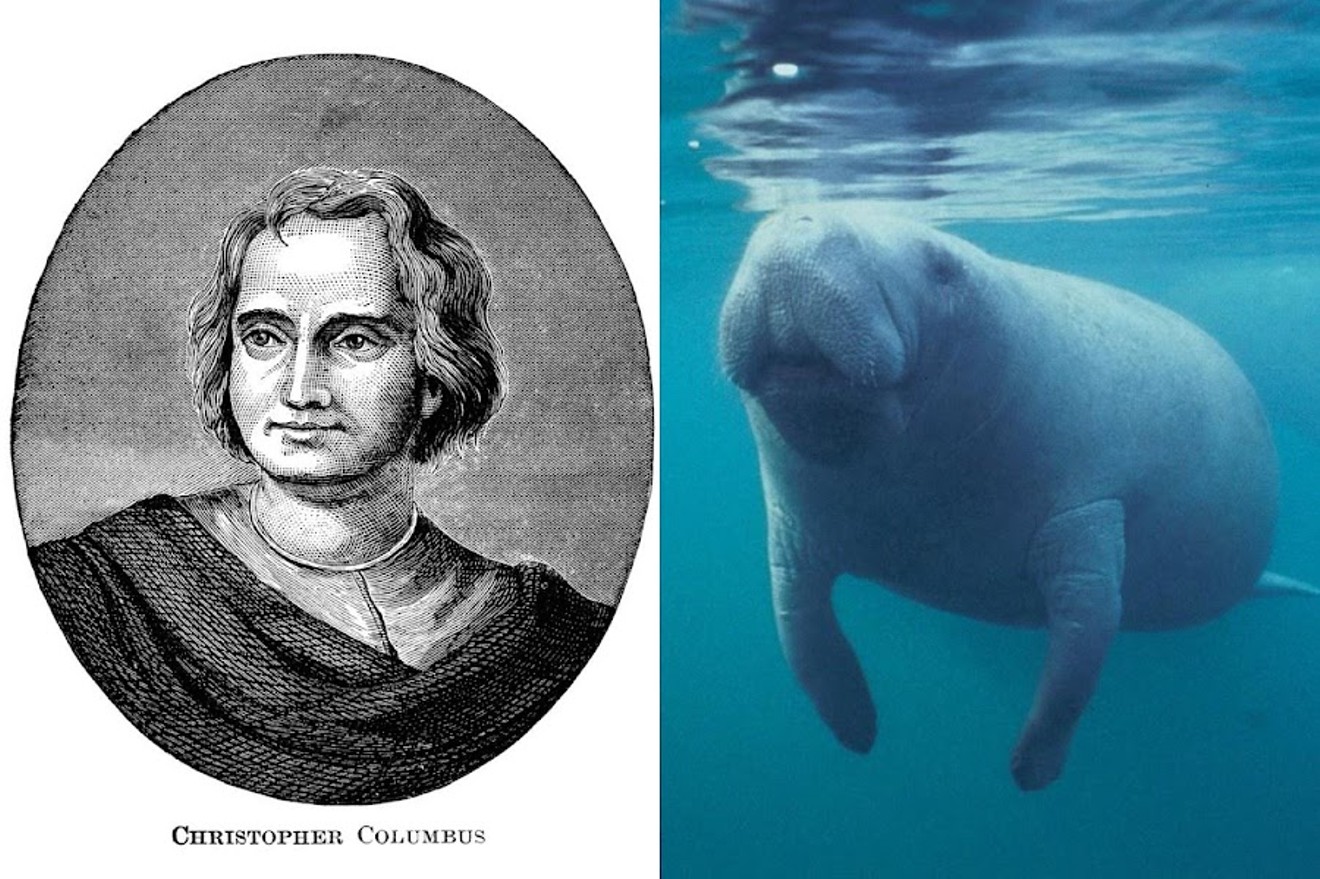 In addition to his ruthless violence against the Taino people and other Native Americans, Christopher Columbus was catfished by buxom sea cows. Photos by mikroman6/Getty, U.S. Fish and Wildlife Service Southeast Region/Flickr
In fourteen hundred ninety-three, not long after stumbling across what would come to be known as the West Indies whilst sailing the ocean blue, famed Italian explorer Christopher Columbus spotted three "mermaids" floating in the water near what is now the Dominican Republic. In his log, he is said to have noted, "Yesterday, when I was going to the Rio del Oro, I saw three sirens that came up very high out of the sea. They were not as beautiful as they are painted, since in some ways they have a face like a man."

That's because they were neither mermaid nor man. More than likely, Columbus encountered manatees, the thousand-pound underwater heifers that sprout whiskers.

On this year's Indigenous Peoples' Day — a federal holiday commemorated on the same day as Columbus Day — let us not forget that in addition to Columbus' ruthless violence against the Taino people and other Native Americans, he was also catfished by Rubenesque sea cows.

You might be wondering: How could someone possibly mistake a large, slow-moving marine mammal for a half-human mythical creature? According to Anthony Piccolo, a literature professor at Manhattanville College in New York, some sailors at the time were so starved for sex that anything remotely curvy piqued their interest.

“Deprivation of intimacy inflamed all these voyages,” Piccolo told writer Kathy Copeland Padden earlier this year. “Anything in the water became a projection of the sailors’ need for contact.”

Columbus wasn't the first sailor to lust after manatees. Throughout history, a number of sailors thought they were seeing mermaids when in reality they were seeing manatees or dugong (a close cousin), according to the nonprofit group Save the Manatee.

“With a little imagination, manatees have an uncanny resemblance to human form that could only increase after long months at sea,” the group imparts in an educational pamphlet. “In fact, manatees and dugongs have helped to perpetuate the myth of mermaids.”

Folklore and old maps of the known world were filled with mermaids and other mythical creatures, potentially priming sailors' belief that the manatees they were seeing were mermaids.

In 1614, British explorer John Smith (of Pocahontas fame) claimed to have seen a mermaid in the Caribbean, writing in his log that he'd "begun to experience the first effects of love" when the creature turned over.

"Her long green hair imparted to her an original character by no means unattractive," Smith wrote in his log.

While mermaids might be a rare sight, so too are manatees: They're currently dying at a record pace, owing to seagrass dieoffs in waterways and lagoons. In July, the Florida Fish and Wildlife Commission (FWC) reported nearly 900 manatee deaths so far in 2021 — the largest death toll ever recorded in a single year.

In a letter to the U.S. Fish and Wildlife Service last week, Florida agriculture commissioner and gubernatorial candidate Nikki Fried asked the federal government to again list manatees as "endangered" after the species was downlisted to "threatened" in March 2017.
KEEP MIAMI NEW TIMES FREE... Since we started Miami New Times, it has been defined as the free, independent voice of Miami, and we'd like to keep it that way. With local media under siege, it's more important than ever for us to rally support behind funding our local journalism. You can help by participating in our "I Support" program, allowing us to keep offering readers access to our incisive coverage of local news, food and culture with no paywalls.
Make a one-time donation today for as little as $1.