Florida Manatees Still in Peril After Recovering From 2021 Die-Off A manatee and calf at Blue Spring State Park Photo by Wayne Hartley/Save the Manatee Club
Following the deadliest year on record for Florida's manatees, fatalities of the beloved marine mammal are showing signs of slowing.

In 2021, more than 1,100 manatees perished, marking the species' highest Florida death toll recorded in a year. The die-off was deemed an "unusual mortality event," a rare designation that demands immediate attention under the federal Marine Mammal Protection Act.

The 2022 manatee mortality numbers have yet to be finalized. However, Pat Rose, director of the Save the Manatee Club, estimates that deaths decreased to around 800 this past year.

While he acknowledges that some may rejoice in this news, especially given how terrible the year 2021 was for the mammals, Rose can't bring himself to celebrate just yet.

"There are some real positives that we're looking at," Rose, who has spent nearly five decades working with manatees, tells New Times. "But those positives are very small in comparison to the high risks that these manatees are facing."

In 2019, the Florida Fish and Wildlife Conservation Commission (FWC) reported more than 500 manatee deaths. This figure rose slightly to around 600 in 2020. So when 1,110 manatees — more than 12 percent of the state's estimated population — turned up dead in 2021, marine biologists were alarmed.

The spike in deaths of the iconic, thousand-pound sea cows was attributed to the drastic loss of their primary food source: seagrass. Parts of the Indian River Lagoon, where herds of manatees gather during winter, have become increasingly clogged with pollution and algae, preventing seagrass growth. According to the Tampa Bay Times, a recent presentation from the St. Johns River Water Management District showed a 75 percent decline in seagrass coverage in the Indian River Lagoon since 2009.

The latest data from the FWC shows that in 2022, a total of 783 manatees died as of December 23, hovering near Rose's estimate.

Rose attributes the stabilization in manatee fatalities last year to a combination of initiatives, including recently implemented programs in which wildlife officials feed lettuce to manatees to curb starvation, as well as the cooperative Manatee Rescue and Rehabilitation Partnership, which he says rescued more than 100 manatees in 2022 to rehabilitate and release.
click to enlarge 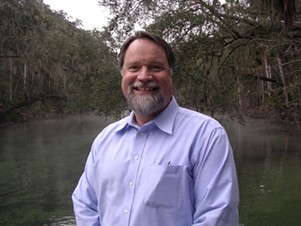 Patrick Rose, Save the Manatee Club’s executive director
Save the Manatee Club photo
Rose emphasizes Florida's manatees still face a dire situation, especially in the northern Indian River Lagoon region of Brevard County. In the area, which is considered the epicenter of the mass die-off, there were only a few less manatee deaths in 2022 as compared to 2021 — around 20, he estimates.

Although many stopgap measures have been undertaken to curb manatee deaths, Rose asserts that safeguarding the manatee population on a long-term basis will require a plan to address nutrient runoff from farms and wastewater treatment plants, which has fed algal blooms and thereby stifled seagrass growth.

In May, three conservation groups, including the Save the Manatee Club, filed a federal lawsuit over poor water quality in Florida.

Rose sees the Indian River Lagoon as a harbinger of what will befall other aquatic ecosystems across Florida if the state does not improve water quality standards.

"If we don't get it under control within the Indian River Lagoon system, then we're going to probably see things getting worse in many other parts of Florida," Rose says.
KEEP MIAMI NEW TIMES FREE... Since we started Miami New Times, it has been defined as the free, independent voice of Miami, and we'd like to keep it that way. With local media under siege, it's more important than ever for us to rally support behind funding our local journalism. You can help by participating in our "I Support" program, allowing us to keep offering readers access to our incisive coverage of local news, food and culture with no paywalls.
Make a one-time donation today for as little as $1.