Students with the Respect Life Ministry at Belen Jesuit participated in a pro-life rally on October 4. Screenshot via Instagram
Earlier this month, students from the Miami all-boys prep school Belen Jesuit came under fire on social media for holding up anti-abortion signs at a roadside rally.

While it was hardly a shock that students from a private Catholic school would promote pro-life views, many people on social media criticized the protesters. Some Twitter users took shots at the school, calling it "brainwashing education" and "miami private school trash."

"But as soon as the fetus is born, no healthcare or support structure and pro-death penalty of course," one person wrote.

"Look at these little virgins trying to make a statement. Cute," another added.

An Instagram page called @belenjesuit_vibe_check posted memes criticizing the students. It amassed more than 1,000 followers before being deleted October 8. The page posted crudely edited photos from the rally, dubbing new messages over the students' pro-life signs. One replaced a sign that read "Belen Jesuit Choose Life" with the phrase "Belen Jesuit" followed by a poop emoji.

In an op-ed for her school newspaper, Miami Country Day School senior Giulianna Bruce wrote that the upheaval was "caused by seeing photos of teenage boys claiming the power to determine the fate of women's bodies and their lives."

But the Belen students also received support from pro-lifers across Florida. Sen. Marco Rubio tweeted a photo of the protesters with a Bible verse ripping the haters: "You will be hated by all because of my name."

Belen Jesuit told New Times in a statement that the staff and administration "fully support our young men as they stand up peacefully for their Christian faith and values."

"The Respect Life Club of Belen participates at the Life Chain and March for Life annually but has never received such an attack for our beliefs," the school said.

The Belen protest is the clearest recent example that the issue of abortion rights is still controversial in Miami and beyond. Last week's confirmation hearings of pro-life Supreme Court nominee Amy Coney Barrett have led to speculation that the landmark case Roe v. Wade, which protects the right of Americans to have an abortion, could be overturned if Barrett becomes the sixth conservative judge on the bench.

At the hearings, Barrett declined to provide her views on the case. But many pro-choice Americans and reproductive-rights groups fear the judge's confirmation could lead to the dismantling of abortion rights.

Although reproductive rights have been at the center of American politics for decades, a new group of voters, Generation Z, is figuring out where to stand on the issue.

Eighteen-year-old Alexander Cobas is the host and producer of Small Room Report, a podcast where he covers current events and interviews interesting Miamians. Cobas reacted to the Belen controversy on his YouTube channel the day after the event. He tells New Times the Instagram meme account showcases how Gen Z responds to controversy with humor.

"I thought it was funny, more so from the reaction to it than the actual situation itself," he says. "If you want to put yourself out there and you want to argue for your position, that's fine, go ahead and do it. Just understand that people will see it, and there's a good chance they'll meme it."

Cobas is pro-choice. He believes abortions should be allowed until the fetus is viable outside of the womb. He says he doesn't begrudge anyone who is pro-life because it's part of their religion, but he draws the line at imposing those beliefs onto others.

In his YouTube video about Belen, Cobas criticized the argument "no uterus, no opinion" that's sometimes invoked by pro-choice advocates, saying it's simplistic to dismiss someone's views because of their gender.

"Going forward, the best way is to address the specific points they are making," he tells New Times. "I'm a man, I'm pro-choice. There were also St. Brendan girls who were protesting against abortions. Does that mean their opinion is now more correct than a male who is pro-choice? The people that make that argument would then say no... they aren't addressing the substance of the arguments."

Belen Jesuit joined schools and parishes from the Archdiocese of Miami at the Life Chain in support of the Respect Life Ministry.

Krystal White is a 21-year-old college student double majoring in biblical studies and behavioral neuroscience at Palm Beach Atlantic University, a private Christian school in West Palm Beach. She's registered as an independent but leans conservative. The strict partisan divide among her friends and the country discourages her from becoming more involved in politics.

"I'm still figuring out what's important to me politically," she tells New Times. "This is the first presidential election I can vote in, and I'm really scared. No matter who I vote for, there's going to be millions of people that are going to hate me simply for it, on either side. That's so much pressure. It's really intimidating."

White says that although her faith is a big part of who she is, her pro-life stance is rooted in her neuroscience research. She says that at six weeks, a fetus already shows signs of brain activity, which she values as a sign of life.

Although she's morally opposed to abortions, White finds it difficult to fully embrace that stance. She says she feels compassion for pregnant women in difficult situations.

White isn't against legal measures restricting abortions, saying she believes the law should protect every life. But she says supporting social measures that reduce the likelihood of abortions should be the priority. Those include establishing good pregnancy clinics, providing free prenatal care and counseling for parents, and fixing the foster-care system.

White perceives Gen Z as more understanding than generations past.

"There's a lot of older Republicans that are very anti-abortion, and it's been a long time since they've had to worry about an unplanned pregnancy," White says. "People in our generation are more like, 'This is a real thing that happens to real people.' It requires more compassion."

Twenty-three-year-old Lucia Grijalva lives in Miami and grew up in a Catholic Nicaraguan household. She says her upbringing definitely played a role in her views on abortion. Both the church and her parents instilled in her that it was wrong.

"I'm still trying to learn about it," she says. "I know I was raised to be pro-life, but I also try to speak with more women. You cannot only stay with what you thought as a kid."

Grijalva says she's not fully against women having the right to abortion, acknowledging that some extreme circumstances make it necessary. But she emphasizes that she's morally against terminating a pregnancy. She says she gets in debates with her mother whenever she advocates for certain exceptions.

Grijalva says she's been met with aggression from Gen Zers who get angry when she shares her views. She's seen multiple posts on TikTok and Twitter making fun of pro-lifers. She tries avoiding the topic because she fears becoming the next meme.

"They joke about it too much," she says. "They're always trying to make fun of you for what you believe instead of trying to understand it."

Francina Nunez, age 21, was born and raised in Broward County, but her family is from the Dominican Republic. She isn't religious, but her grandparents are devout Catholics. Nunez says it's difficult to discuss abortion with them since they have such opposing views.

"It's sometimes a conversation you don't even want to have," she says. "You aren't going to see my point of view, and I'm not going to see your point. So it's very difficult to meet in the middle."

Nunez believes the government shouldn't dictate what a woman can do with her body. She says conservative politicians are too preoccupied with religion, causing them to push their agenda onto others. She says she was shocked when Vice President Mike Pence proudly stated he was pro-life at the vice presidential debate earlier this month.

"It's so hypocritical," Nunez says. "Especially men in power — they want to continue with how it's always been, where they have the control of what's going on. Something so important like deciding on a life, they don't even care about the life after. They just care about being the ones making the decision of what should be done."

Twenty-one-year-old Virginia Bonilla is a lifetime resident of Broward County. She thinks politicians are vocal about being pro-life in order to sway white conservative Americans to vote for them.

"Every couple of months, they are talking about defunding Planned Parenthood or messing up the rights we have now in order to please their supporters," Bonilla says.

She also bemoans the lacking sex education in Florida, which lets individual school districts determine how sex ed is implemented. Districts can choose between abstinence-only, abstinence-plus, or comprehensive sexual-health education. Florida students can also be exempted from sex ed classes upon request from their parents.

Growing up, Bonilla felt dissatisfied with how her schools approached the topic. Toward the end of the school year in fifth grade, she recalls the boys in her class being taken to another room for sex education, while the girls were told to not to worry about it. Bonilla wishes Florida schools would provide a more thorough sex ed curriculum.

"There's such a stigma on women's sexuality and their bodies that when we get to the concept of abortion, we don't have enough knowledge or education to make a decision," she says.

All four of the young women interviewed by New Times acknowledged that abortion is a complex issue that can't be resolved through partisan politics.

"It's a really messy subject — really difficult and sad," White says. "It should be easier for both sides to understand each other... but it seems with abortion, it's very black and white."
KEEP MIAMI NEW TIMES FREE... Since we started Miami New Times, it has been defined as the free, independent voice of Miami, and we'd like to keep it that way. With local media under siege, it's more important than ever for us to rally support behind funding our local journalism. You can help by participating in our "I Support" program, allowing us to keep offering readers access to our incisive coverage of local news, food and culture with no paywalls.
Make a one-time donation today for as little as $1. 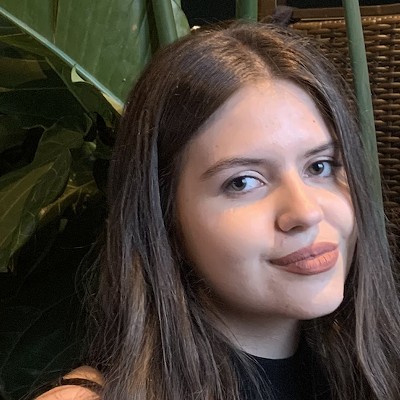 Natalia Clement is a freelance journalist for the Miami New Times and WLRN, South Florida’s public radio news outlet. She enjoys covering local topics of interest from the perspective of her generation.
Follow:
Twitter: @nataliaclem