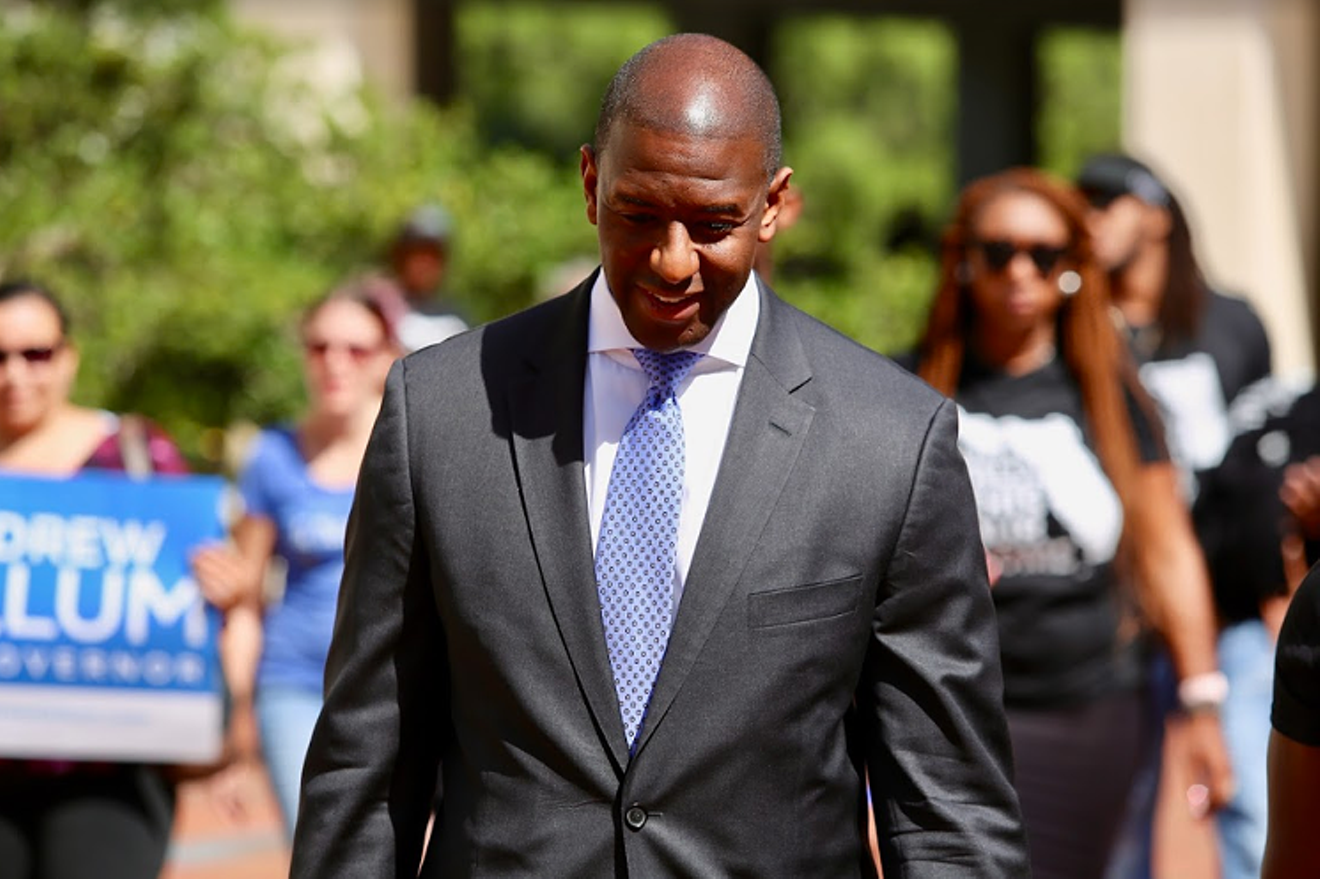 Former Tallahassee Mayor Andrew Gillum ran a failed campaign to become Florida's governor in 2018. Courtesy of the Andrew Gillum campaign
Update, March 15, 8:20 p.m.: Andrew Gillum has released a new statement to Miami Herald reporter David Smiley. "After conversation with my family and deep reflection, I have made the decision to seek help, guidance, and enter a rehabilitation facility at this time." His full statement has been posted below.

Former Florida gubernatorial candidate Andrew Gillum was allegedly present during an incident involving crystal meth at a Miami Beach hotel early this morning, according to an incident report obtained by New Times. A source with knowledge of the incident confirmed that Gillum's date of birth matches the identifying information of the Andrew Gillum whose name is on an incident report circulating on Twitter this morning. Gillum served as mayor of Tallahassee from 2014 to 2018.

In a statement to Miami Herald reporter David Smiley, Gillum said, "I was in Miami last night for a wedding celebration when first responders were called to assist one of my friends. While I had too much to drink, I want to be clear that I have never used methamphetamines."

The incident is not being treated as a criminal matter. A copy of the report is embedded below. Police redacted Gillum's contact information in black; New Times has used blue bars to redact information regarding other people named in the report.

According to the documents, police responded to a cardiac-arrest distress call just before 1 a.m. at the Mondrian South Beach. When two officers from the Miami Beach Police Department arrived at the luxe hotel on West Avenue just north of 11th Street, they noted that Miami Beach Fire-Rescue was on scene treating a man for a possible drug overdose, but that the man, identified as Travis Dyson, was in stable condition.

The officers stated that the third man involved in the incident, Aldo Mejias, had lent Dyson his credit-card information to rent a hotel room yesterday afternoon and that the two were supposed to meet later that day. Mejias told the officers that he arrived at the hotel room around 11 p.m. and that Dyson opened the door and then immediately collapsed on a bed and began vomiting. Mejias said he began giving Dyson CPR and called 911.

Mejias told police Gillum was inside the hotel room "under the influence of an unknown substance." Mejias said that while he was performing CPR on Dyson, Gillum was vomiting in a bathroom. Officers said that they tried to speak with Gillum but that he was "unable to communicate due to his inebriated state."

Miami Beach Fire-Rescue said it responded to the hotel a second time for a "welfare check" on Gillum, at which time he was in a stable condition.

The officers said they found three small baggies of "suspected crystal meth" on "both the bed and floor of the hotel room." Officers said Gillum left the hotel room "without incident" that night and went home.

Mejias did not immediately respond to emails, calls, and texts from New Times.

"I personally was not celebrating a wedding. I don't know if [Gillum] was in town for a wedding. He did not mention that," Dyson said.

Dyson said he has known Gillum since around last spring.

"We've been friends for a while," Dyson said. He then went silent on the phone and did not answer subsequent calls from New Times.


After conversation with my family and deep reflection, I have made the decision to seek help, guidance, and enter a rehabilitation facility at this time. This has been a wake-up call for me. Since my race for governor ended, I fell into a depression that has led to alcohol abuse. I witnessed my father suffer from alcoholism and I know the damaging effects it can have when untreated. I also know that alcoholism is often a symptom of deeper struggles. I am committed to doing the personal work to heal fully and show up in the world as a more complete person.

I now need to firmly focus on myself and my family. I will be stepping down from all public facing roles for the foreseeable future.