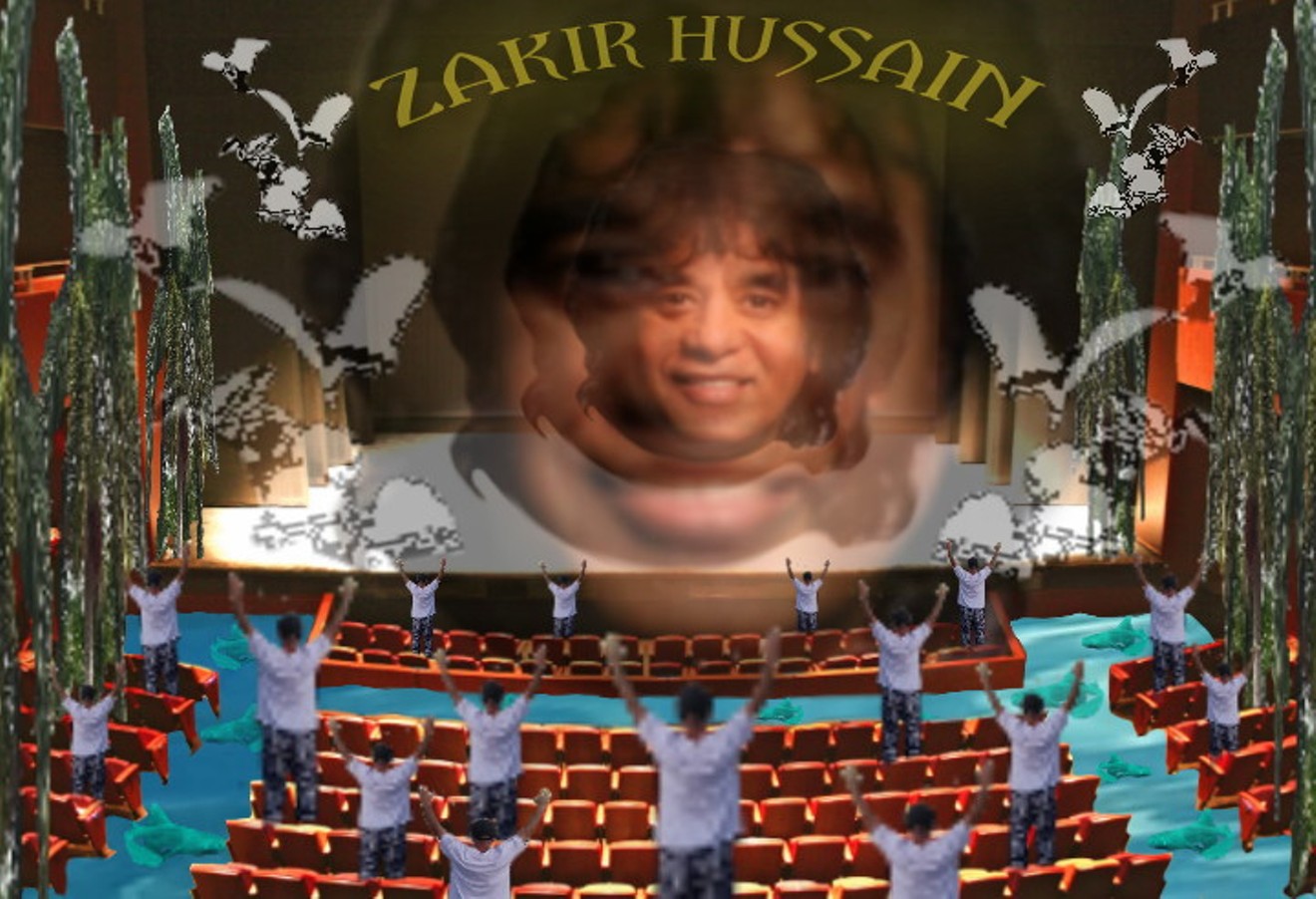 An image of me worshiping at the Church of Zakir, created by AholSniffsGlue during our interview. AholSniffsGlue
In the early 2000s, I was dosed with 300 hits of LSD while attending a free Zakir Hussain concert in New York City’s Central Park. A young woman in her late teens with green hair and crooked teeth, wearing an Econochrist shirt, offered me a stick of mint gum. Rubbing the chewing gum’s foil wrapper against my neck, she informed me that the gum had been dipped in liquid acid.

Meanwhile, Hussain and John McLaughlin, the legendary guitarist who appeared on Miles Davis’ Bitches Brew, conjured up hallucinations of dinosaur holograms, aliens, and distant galaxies using ancient sound onstage. The hippies swayed and pointed, crooning, “That is God up there. God is Love. That’s Zakir Hussain, man!” They bowed to him and rejoiced.

Hussain grew up in India and is considered by many to be the architect of modern world music. He has won two Grammy Awards in that category. He began his career studying the 2,000-year-old traditional music of his homeland, but he craved the rock 'n' roll lifestyle of the Western hippie set. When he finally made a pilgrimage to San Francisco in the late '60s, he hooked up with some heavy-hitters: George Harrison of the Beatles, Mickey Hart of the Grateful Dead, and jazz greats like Herbie Hancock and Tony Williams.

Zakir broke barriers and got rockers into the music of India. His influence hit me hard that afternoon in Central Park, but I'd been following the genius well before that trip. Inspired by his album The Elements: Space, which I must have listened to more than a hundred times, I traded my electric guitar for a harmonium. Born in India, the devotional instrument has the perfect mesmerizing drone, a sound I'd been unsuccessfully trying to produce with the guitar.

I've been performing with the harmonium for a number of years as Handelsman. So when the opportunity to speak with Hussain for New Times arose, I was excited. I was nervous. I needed backup.

Luckily, I had my friend Ahol.

I was enjoying a business luncheon at Hot Dog Heaven in Fort Lauderdale with AholSniffsGlue, AKA the artist and fellow Huffer Collective member David Anasagasti, when I shared the news. “I’m about to call his Divine Grace, Zakir Hussain!” I exclaimed.

“Two-time Grammy Award-winning tabla master and ambassador of world music, Zakir Hussain. He recorded with the Beatles. His album The Elements: Space is my favorite album of all time.” Surely my cultured collaborator knew about Hussain. But Ahol shook his head.

"He's like Jimi Hendrix from India!" I protested. "He will be performing in Miami with the great Rahul Sharma!" I lifted up my arms and sang out to passing cars: “Zaaakkkeeerrr!”

Ahol laughed and said, “That’s wild, my dog!” He sipped his soft drink and then advised, “Call him from my crib on speaker phone.”

That's how I found myself on Ahol's balcony, dialing the number of my musical hero. I had so much I wanted to ask him: What did he think of Miami? How does religion affect his sound? What's his take on Donald Trump?

Little did I know Hussain planned to interview me instead.
Before I had the chance to ask him anything, Hussain told me he'd been watching Handelsman footage on YouTube. “I looked at your International Noise Conference videos,” he said from his home in San Anselmo, California.

“And what did you think?” I asked.

“I don’t know if you’ve had the kind of exposure or visibility as you should," Hussain said. "What I’m trying to do is bring musicians who are sort of unknown but really great and put them on stages all over the world. Me being a part of it, I’ll hopefully get better as a musician myself... Does that make sense?”

Wait. Was Zakir Hussain asking me to perform with him? A mental image of a world tour formed. I was at a loss for words.

“Enough about me,” I said finally.

“No,” he humbly insisted, “I just wanted to know... when you sing, are you using any words, telling stories, or what?” he asked.

I explained my "Handelsmantra": In short, by chanting and reciting things like Handelsmantra and "Handelsmanifesto," I'm creating a sort of spiritual graffiti that, I hope, can manifest ideas and desires into reality.

“So you recite your last name as one of the things you do, which is called ‘Handelsmanifesto Part A'? Is that what it is?”

My heart was pounding like Hussain on the tabla. My spirit hovered over the Himalayas.

He continued, “You’re using a traditional instrument with the harmonium and the traditional idea of a mantra... You’re putting your expressiveness and your way of transmitting it, and so it changes into something different, maintaining its link to old tradition.” He paused and added, “Then there’s the Huffer Collective.”

Ahol, still listening to the call on speaker, gave me a thumbsup.

“When I come to Miami, are we gonna see each other?” Hussain asked.

I became dizzy with enthusiasm. You have a job to do, I told myself. Interview the man. I tried to pull myself together.

“Did you ever play with Miles Davis?” I asked.

But Hussain interrupted, “That happened already. I can’t be standing on what’s already happened. I have to be better every day that goes by.

"When I get to Miami,” he continued, “I hope our paths cross and plugging in together will happen.”

Stunned and giddy, I hung up the phone. “I think Zakir was feeling the vibe," Ahol said. "You are like Paul Revere... educating people of his arrival.”

I don't know if Hussain and I will meet this Friday when he performs at the South Miami-Dade Cultural Arts Center. I don't know if we'll have the chance to play music together or if he'll take me on tour. But I do know that Zakir Hussain has seen my work — work that was inspired by him — and he approves. The music god has looked favorably upon me.

That's more of a trip than anything that happened in Central Park.

Artist and writer Jason Handelsman performs as Handelsman and is a member of the Huffer Collective, a collaboration with artists AholSniffsGlue and Jacob Katel, AKA Swampdog. Read more about Handelsman here.