The Ultra Main Stage at the 2019 edition on Virginia Key. Daniella Mía
Ultra is in the midst of what some might call a rebuilding year. The electronic music festival is searching for a new South Florida home after being kicked out of downtown Miami's Bayfront Park in 2018 and voluntarily leaving Virginia Key in 2019. Now, as potential suitors court festival organizers (and some Miami commissioners try to woo them back), Ultra is touting the successes of the sustainability initiatives it implemented last year.

Among other notable improvements, Ultra says it more than halved its consumption of single-use plastics over previous years. Its reduction in plastic-bottle use came about 47,000 units short of the number the festival predicted to New Times earlier this year, but the festival's reduced use of plastic cups and straws contributed to the drastic cut in plastic waste.

Ultra also says 31 percent of the waste created at the festival was diverted from landfills through recycling and composting efforts and that 100 percent of its recycling loads were accepted by local recycling facilities. The festival says it will continue its sustainability efforts during its next iteration.

"We are happy to announce that our 'Mission: Home' sustainability initiatives including our Leave No Trace policy, single-use plastic reduction efforts, and recycling program will continue in 2020 and beyond," Vivian Belzaguy, Ultra’s senior manager of sustainability, said in a statement. 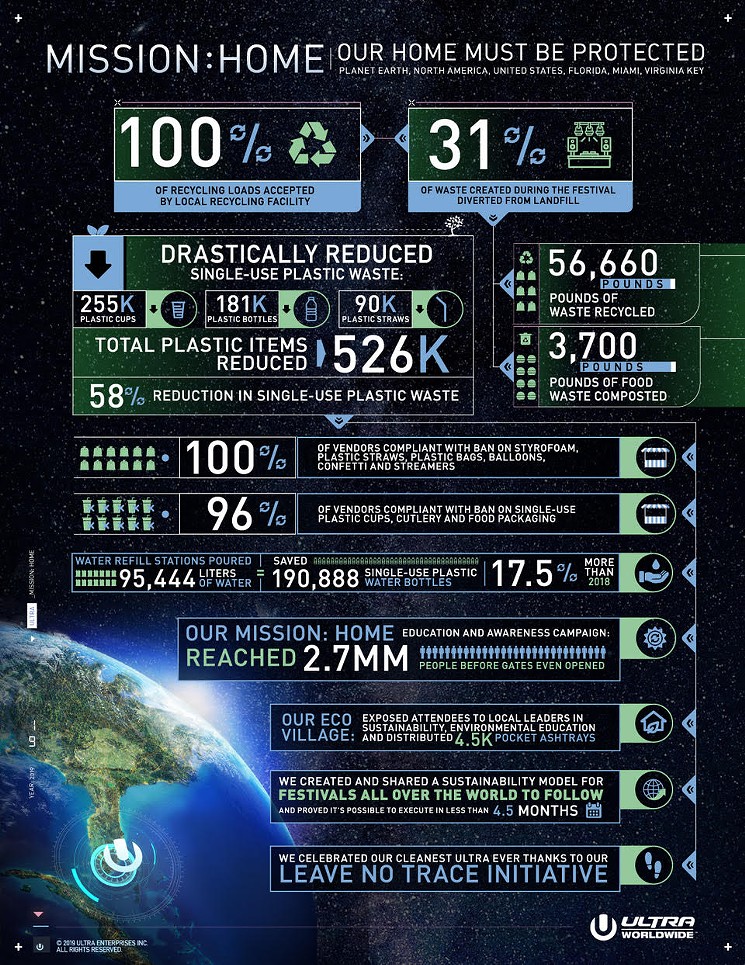 Ultra's highlighting its sustainability practices.
Ultra Music Festival
But environmentalists continued to voice concerns after Ultra announced its sustainability campaign. Many warned about the possible impact on wildlife. At the time, Miami Waterkeeper's executive director, Rachel Silverstein, said the festival might even "violate federal and state laws banning harassment of endangered species." Ultra pushed back, saying its experts "concluded there would be no harm to any protected species or habitat" due to prohibited beach access and noise-mitigation procedures.

But an analysis by University of Miami scientists later showed that toadfish in research facilities on Virginia Key experienced stress levels beyond those they typically experience while being chased by a predator. Such confirmation of the festival's negative impact on wildlife, coupled with catastrophic transportation issues, ultimately led Ultra to bow out of a return to Virginia Key.

Despite its impact on wildlife, Ultra's sustainability efforts earned an "A" rating on an environmental report card compiled by VolunteerCleanup.org, Surfrider Miami, and Debris Free Oceans. The festival partnered with the local organizations to develop its sustainability and environmental protection initiatives, which were then measured for effectiveness after the festival ended. Of the 19 initiatives that received an individual grade, 14 received a grade of A-minus or higher, with composting cited as the area with the most need for improvement.
KEEP MIAMI NEW TIMES FREE... Since we started Miami New Times, it has been defined as the free, independent voice of Miami, and we'd like to keep it that way. With local media under siege, it's more important than ever for us to rally support behind funding our local journalism. You can help by participating in our "I Support" program, allowing us to keep offering readers access to our incisive coverage of local news, food and culture with no paywalls.
Make a one-time donation today for as little as $1.