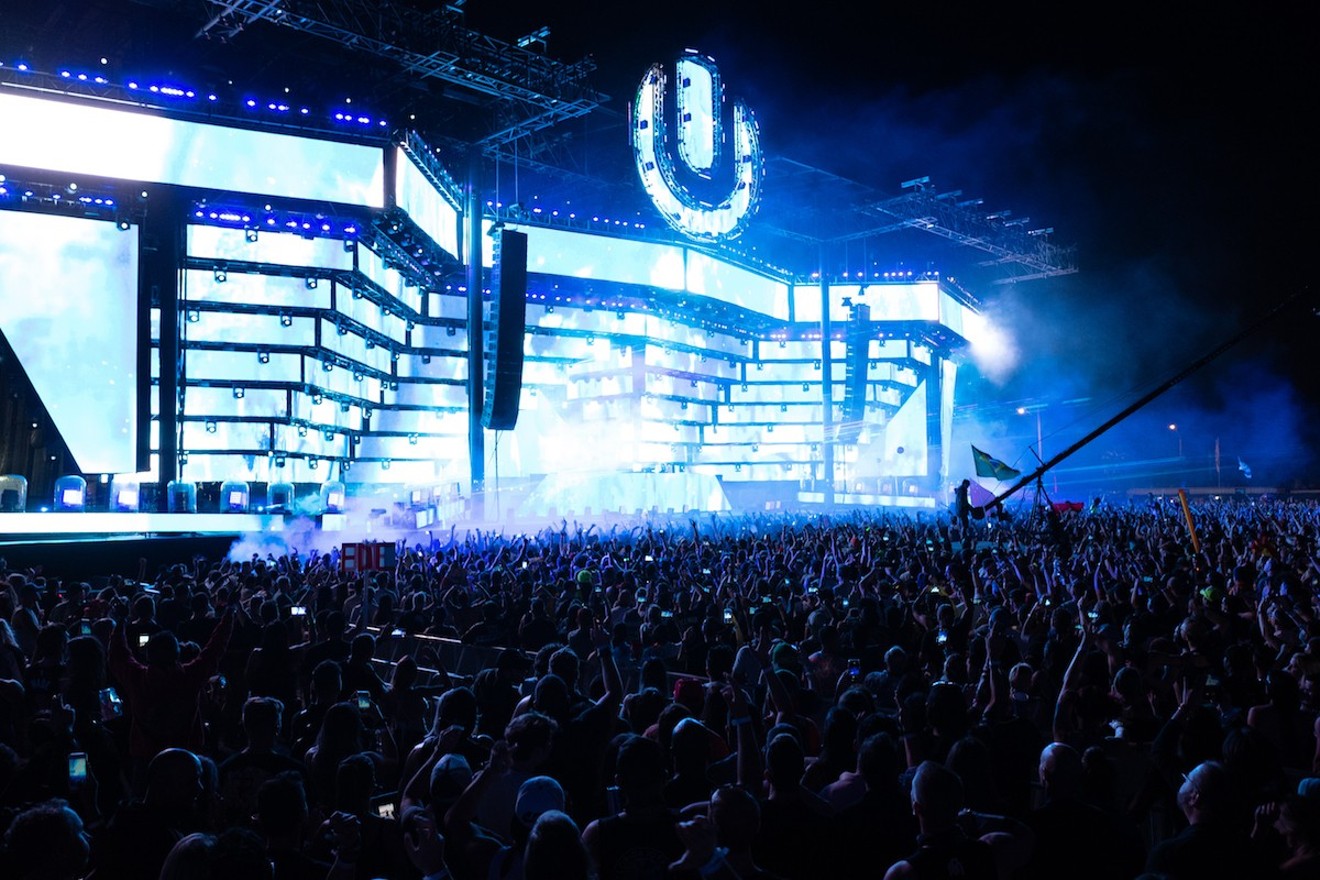 Ultra Music Festival's main stage at Miami Marine Stadium in March 2019. Photo by Daniella Mía
Last year, the City of Miami kicked Ultra Music Festival, one of the best-known electronic music festivals in the world, out of its longtime home at Bayfront Park in downtown Miami. And now, after what can only be described as a challenging edition on Virginia Key this past March, Ultra's organizers announced today they are voluntarily terminating their contract with Miami and will move elsewhere in South Florida.

"After listening to feedback from many of you (including over 20,000 fans who took our post-event survey), it is clear that the festival experience on Virginia Key was simply not good enough," the event's organizers said in an open letter posted online today. "This is Ultra Music Festival, after all, and our attendees expect us to deliver on our commitment to excellence."


A letter to our fans... pic.twitter.com/m0DkoUWdBU

The festival is not, however, leaving the Miami area. The organizers said today they are "now finalizing a new South Florida location that will serve as an incredible and permanent home for Ultra Music Festival." The Miami Herald reports the festival might move to Homestead in rural South Miami-Dade.

In a phone call with New Times, Mayor Francis Suarez blamed the loss of Ultra on Commissioner Joe Carollo, who spearheaded the festival's move out of Bayfront Park. The commissioner was in charge of drafting an agreement that would satisfy both residents and the festival, but he ended up torpedoing it. As a result, the festival was forced to make a last-minute move to Miami Marine Stadium and Virginia Key Beach Park on Virginia Key, an island that has only one road in and out, creating a logistical conundrum.

"Obviously it's disappointing, but it's not surprising given the fact that they were negotiated with in bad faith by Commissioner Carollo," Suarez says. The mayor didn't pull any punches, adding, "I do find it sort of ironic that the commissioner negotiated with them a deal and rescinded the deal, which forced them at the last minute to have to go to another site under duress, and then now wanted to turn around and cancel after voting for that deal. I just find it to be typical of him."

Carollo did not immediately respond to New Times' request for comment.

Ultra moved to downtown Miami in 2001 after debuting in Miami Beach in 1999. The festival's first mainland location was Bayfront Park before it moved to the much larger Bicentennial Park in 2006. However, the impending build of Pérez Art Museum Miami forced the festival back to Bayfront Park in 2013. That year appears to have marked the moment when issues with downtown residents began. The noise and crowds became a source of ire for residents, who complained that the festival made life in downtown unlivable and that the park was occupied for weeks on end during stage construction and breakdown.

At the time, Ultra was growing into a major brand thanks to the rise of EDM as both a genre and a marketable lifestyle. The festival expanded to several global editions that included Europe, Japan, Korea, India, Australia, and Brazil. It also debuted a successful second brand, Resistance, which specializes in underground dance music.

At a news conference before this year's edition, Mayor Suarez said he saw Virginia Key as a better home for the festival. But the move was opposed by officials and residents on the island. And things didn’t go all that smoothly with the bus system used to transport festivalgoers on and off the island: It completely failed after the first night, forcing thousands of attendees to walk across the Rickenbacker Causeway to call ridesharing services on the mainland.

Suarez said Wednesday that the festival didn't go as smoothly as he had imagined. He added that organizers were put in a "very difficult situation" because they were given little time to figure out the logistics.

"I'm sure they didn't like being called 'Fyre Fest Two,'" he said.

Ultra is the second major event to move out of the area in recent years. In 2019, the Miami Open left its longtime home at the Crandon Park Tennis Center to move to Hard Rock Stadium in Miami Gardens. (Although Crandon Park is under the jurisdiction of Miami-Dade County, it's proximity to the city meant it enjoyed the economic benefits.)

"This is obviously going to mean the loss of thousands of jobs in our community," Suarez said.
KEEP MIAMI NEW TIMES FREE... Since we started Miami New Times, it has been defined as the free, independent voice of Miami, and we'd like to keep it that way. With local media under siege, it's more important than ever for us to rally support behind funding our local journalism. You can help by participating in our "I Support" program, allowing us to keep offering readers access to our incisive coverage of local news, food and culture with no paywalls.
Make a one-time donation today for as little as $1.