Ten Concerts to Look Forward to This Spring

Kali Uchis Photo by Kathy Rosario
There’s no need to wait for summer to get excited about concerts and festivals. In Miami, spring brings a whole new season of musical events to anticipate — and more hours of daylight to enjoy it all. Once the craziness of March's spring-break invasion has worn off, you can really begin to embrace the season. Here, in chronological order, are ten concerts to set your sights on in the next couple of months.
Method Man and Redman. It’s been ten years since East Coast rappers Method Man and Redman released a full-length album together (2009’s Blackout! 2), but that doesn’t mean their collaboration is over. The duo reunited in 2018 for the track “Wild Cats” on Method Man’s latest album, Meth Lab Season 2: The Lithium. Method Man, who got his start as a member of the hip-hop collective Wu-Tang Clan, and Redman, who was part of Def Squad in the ‘90s, have shared a lot over the years: They were both signed by Def Jam Records, in the 2001 stoner film How High, and even briefly headlined a sitcom on Fox called Method & Red. You’ll find them together again this month, at the Venue Fort Lauderdale. 10 p.m. Saturday, April 27, at the Venue Fort Lauderdale, 2345 Wilton Dr., Wilton Manors; 954-765-6968. Tickets cost $50 to $60 via eventbrite.com.

Imogen Heap
Photo by Kris Krüg via Flickr
Imogen Heap. Maybe you know her for “Hide and Seek,” the song from her 2005 album, Speak for Yourself, that Jason Derulo heavily sampled in his hit “Whatcha Say.” Maybe you were lucky enough to snag a ticket to Harry Potter and the Cursed Child or just listened to the play’s score, which she wrote. Or maybe you’ve heard Ariana Grande’s cover of Heap’s “Goodnight and Go” on Grande's 2018 album Sweetener, or Taylor Swift’s song “Clean,” on which Heap collaborated. One thing’s for sure: Heap inspires other artists and has been doing so for more than 20 years. The British singer-songwriter’s instantly recognizable voice sometimes boasts an otherworldly, breathy sweetness and other times swells with distortion, a whole digital landscape embedded in each note. If you catch her in concert, maybe she’ll inspire you too. 8 p.m. Sunday, April 28, at the Fillmore Miami Beach, 1700 Washington Ave., Miami Beach; 305-673-7300; fillmoremb.com. Tickets cost $30 to $45 via livenation.com.

Greta Van Fleet
Photo by Travis Shinn
Greta Van Fleet. Still relatively new, the Michigan-based band Greta Van Fleet was formed by four young rockers: twin brothers Josh and Jake Kiszka on vocals and guitar, their younger brother Sam on bass and keyboard, and Danny Wagner on drums. The band burst onto the scene in 2017 with the single “Highway Tune” and two EPs — Black Smoke Rising and From the Fires — which immediately garnered comparisons to Led Zeppelin, though Greta Van Fleet also cites classic rock, indie, and world-music influences. Their debut LP, Anthem of the Peaceful Army, dropped last October, and they embarked on a world tour in support of the album earlier this year. They’ll start the North American leg in Miami. 8 p.m. Tuesday, May 7, at Bayfront Park Amphitheater, 301 Biscayne Blvd., Miami; 305-358-7550. Tickets start at $66 via livenation.com.

Tame Impala's Kevin Parker
Photo by Matt Sav
Tame Impala. Psychedelic images of bright colors and ever-changing patterns come to mind when one thinks of Tame Impala. Australian musician Kevin Parker writes, records, produces, and performs the band’s songs and often tours with members of fellow Aussie band Pond. Tame Impala’s psych-rock, slightly electronic vibes are well suited to festivals and live performances. The music conjures a whole visual world through sounds one can physically feel and almost see. Next month, the band will perform its first live show in Miami (aside from a DJ set with Mark Ronson in 2017). Though its last album, Currents, came out nearly four years ago, songs such as “The Less I Know the Better” and “New Person, Same Old Mistakes” remain popular. There’s also been speculation that Parker will release new music soon. Either way, Miami is lucky to finally get its turn to experience him live. 8 p.m. Tuesday, May 7, at the Fillmore Miami Beach, 1700 Washington Ave., Miami Beach; 305-673-7300; fillmoremb.com. Verified resale tickets start at $210 via livenation.com. 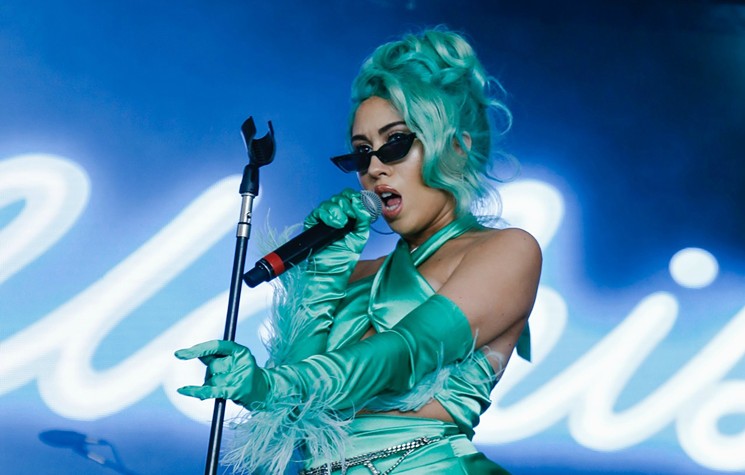 Kali Uchis
Photo by Kathy Rosario
Kali Uchis and Jorja Smith. The poster for the Kali & Jorja Tour, featuring Colombian-American singer Kali Uchis and English singer Jorja Smith, proves these two just go together. Dressed in black and draped in jewelry, arms around each other for support, they look ready to take on the world. That’s true for their vocals too. One of “Tyrant,” the Smith-featured first single off Uchis’ album Isolation, shows how well they complement one another. Both soulful and strong, with a clear command of their craft, the two women will a North American tour that will stop in Miami this May. They released their respective debut studio albums last year, and Smith is also coming off a Best New Artist Grammy nomination. Let's hope Uchis will sing her album's second track, titled — what else? — “Miami.” 8 p.m. Wednesday, May 8, at the Fillmore Miami Beach, 1700 Washington Ave., Miami Beach; 305-673-7300; fillmoremb.com. Tickets start at $66 via livenation.com.

Cardi B
Photo by Jora Frantzis
Rolling Loud Festival. For its fifth anniversary, the self-proclaimed largest hip-hop festival in the world is pulling out all the stops with a lineup that’s a rap lover’s dream. The three-day showcase this year will present headliners Migos, Travis Scott, and Kid Cudi, all of whom released much-talked-about albums in 2018. The list of more than 100 artists includes plenty of other big names, such as Cardi B, Rae Sremmurd, Lil Wayne, and Gucci Mane, as well as a healthy selection of Florida artists, like Rick Ross, Lil Pump, Kodak Black, and Ski Mask the Slump God. The festival has grown significantly since its inaugural edition in Wynwood in 2015, and this year it will be held at Hard Rock Stadium for the second time in an effort to avoid noise complaints in residential areas. You’d be hard-pressed to find another festival offering this much hip-hop talent. Friday, May 10, through Sunday, May 12, at Hard Rock Stadium, 347 Don Shula Dr., Miami Gardens; hardrockstadium.com. General admission tickets are sold out; VIP table packages start at $5,000 via rollingloud.com.
Disclosure. When brothers Howard and Guy Lawrence released their first album, Settle, in 2013, they immediately became a hit in their home country of England, and they’ve since found success stateside as well. They’ve been heralded as among the most exciting new additions to the EDM world and praised for creating music that makes listeners want to move. After a world tour and the release of their second studio album in 2015, they announced in 2017 they’d take some time off. Now they’re reportedly at work on their third album, which might drop this year. The duo is set to play at Space until the sun comes up, so be prepared to dance all night. 11 p.m. Friday, May 17, at Club Space, 34 NE 11th St., Miami; 786-357-6456; clubspace.com. Tickets are sold out.

Ariana Grande
Photo by George Martinez
Ariana Grande. It's safe to say that in 2019, Ariana Grande is killing it. On the heels of the success of Sweetener, the pop star released her fifth studio album, Thank U, Next, full of bold, unapologetic tracks such as “7 Rings,” “Bloodline,” and “Break Up With Your Girlfriend, I’m Bored.” She became the first artist since the Beatles to hold all three of the top spots on the Billboard Hot 100 chart simultaneously. When a beef with the show’s producer prompted her to cancel her appearance at the Grammys, she stayed home, Instagrammed herself lounging in a custom Zac Posen gown, and won Best Pop Vocal Album for Sweetener. Grande is taking charge, and we’re happy she’s inviting us along for the ride. Joining her on the Sweetener World Tour are pop duo Social House, which coproduced Grande’s song “Thank U, Next,” and , a former Fifth Harmony member who’s breaking out on her own and already generating buzz while working on her first solo album. 7:30 p.m. Friday, May 31, and Saturday, June 1, at American Airlines Arena, 601 Biscayne Blvd., Miami; 786-777-1000; aaarena.com. Tickets start at $149 via ticketmaster.com.
Florence + the Machine. "Want me to love you in moderation/Do I look moderate to you?" Florence Welch sings in one of two new songs released in January by the English indie-rock band Florence + the Machine. In interviews and in her music, Welch has addressed topics such as her experiences quitting drinking and dealing with heartbreak, but last year’s High as Hope, the band’s fourth studio album, found her even more open, raw, and vulnerable. In one song, she alludes to the eating disorder she struggled with as a teen; another track acts as a confession to Patti Smith, one of Welch's idols. It’s been a few years since Florence + the Machine performed in Miami, but they'll stop in the Magic City in June on the High as Hope Tour. If their last visit is any indication, expect them to hold nothing back. 7:30 p.m. Sunday, June 9, at American Airlines Arena, 601 Biscayne Blvd., Miami; 786-777-1000; aaarena.com. Tickets start at $35.50 via ticketmaster.com.

Twenty One Pilots
Photo by Sean McCloskey
Twenty One Pilots. Hailing from Columbus, Ohio, Twenty One Pilots became a household name in 2015 when they released , their fourth studio album. The standout single, “Stressed Out,” tapped into something that felt especially honest about the nostalgia and growing pains that come with leaving childhood behind and being told you’re supposed to be an adult. “I was told when I get older all my fears would shrink/But now I’m insecure and I care what people think,” they lamented. The duo of Tyler Joseph and Josh Dun blends rock and rap with a pop-punk flavor. They'll stop in Miami on their Bandito Tour, which launched last year after they released their fifth studio album, Trench. 7 p.m. Saturday, June 15, at American Airlines Arena, 601 Biscayne Blvd., Miami; 786-777-1000; aaarena.com. Tickets start at $35.50 via ticketmaster.com.
KEEP MIAMI NEW TIMES FREE... Since we started Miami New Times, it has been defined as the free, independent voice of Miami, and we'd like to keep it that way. With local media under siege, it's more important than ever for us to rally support behind funding our local journalism. You can help by participating in our "I Support" program, allowing us to keep offering readers access to our incisive coverage of local news, food and culture with no paywalls.
Make a one-time donation today for as little as $1.