Iron Maiden’s Steve Harris on Accusations of Satanism: "It Was Hilarious!" 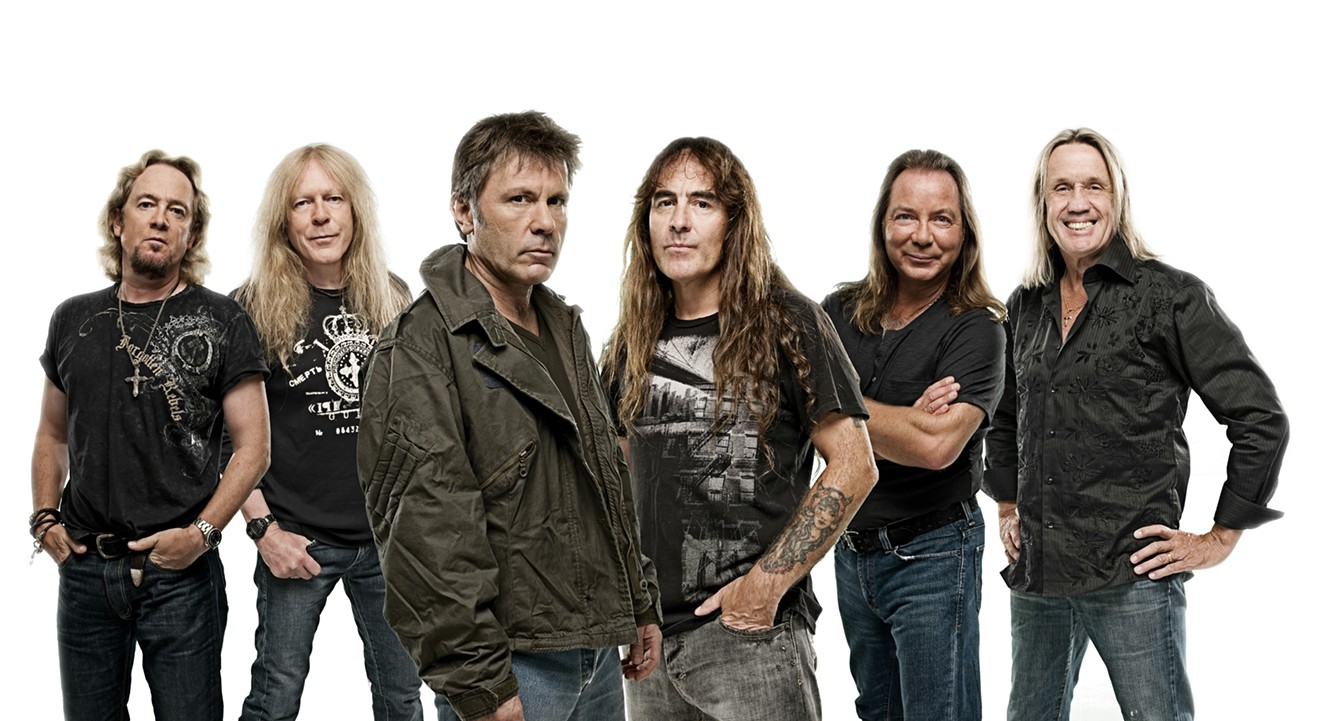 Iron Maiden remains a dominant force in heavy metal. Photo by John McMurtrie
When your band is named after a medieval torture device, your third album is titled The Number of the Beast, and it contains songs titled “Children of the Damned” and “Hallowed Be Thy Name” and bears an image of a red demon on the cover, some people might accuse you of being satanic.

Those people can’t take a joke.

“It was just hilarious; it was absolutely hilarious,” Iron Maiden founder, bassist, and songwriter Steve Harris says of how Maiden retaliated against relentless accusations of satanism after the British heavy-metal band's release of The Number of the Beast. “It was so ridiculous we thought we’d do something ridiculous back.”

So on Maiden’s next album, Piece of Mind, drummer Nicko McBrain — a born-again Christian who lives in Boca Raton and owns Rock 'n’ Roll Ribs in Coral Springs — recorded a backward message on the song “Still Life” while mimicking the voice of former Ugandan President Idi Amin.

Then, for further comic effect, he belched.

"Don’t meddle in things you don’t understand,” Harris says of its meaning.

“We thought people probably won’t understand anyway, and if they do, they’ll have a good laugh,” he adds. “It worked, because people didn’t know what it was. That’s Nicko’s disguised voice for you — no one can understand him in the best of times.”

As is often the case when the religious right ascribes satanic messages to heavy-metal music, Iron Maiden had the last laugh. The record reached number one in the United Kingdom, and the band went on to sell 100 million albums throughout its career, surpassing metal icons such as Judas Priest and Black Sabbath.

Today, Maiden claims three spots on Rolling Stone’s "100 Greatest Metal Albums of All Time," including number four with 1982’s supposed ode to evil, The Number of the Beast. 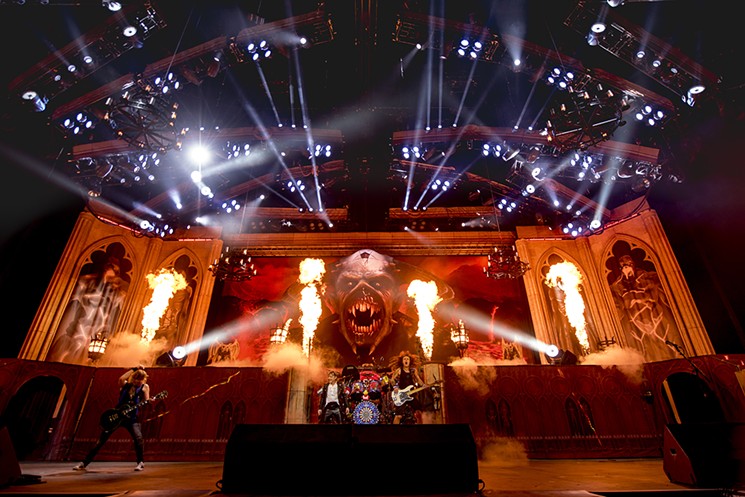 Iron Maiden's Legacy of the Beast World Tour kicks off its American leg July 18 at the BB&T Center.
Photo by John McMurtrie
Harris laughs off allegations of satanism but agrees the band has evolved into an entity that transcends the music. Maiden’s mascot, Eddie the Head — a ghoulish figure with flashing red eyes and a mouth that spits smoke and blood — appears at shows and adorns every album cover. His visage graces countless T-shirts, posters, and action figures and is featured in the band’s signature videogames.

“Ultimately, it’s the songs,” Harris says. “What we have is so powerful it lends itself to a lot of different imagery... A lot of people are saying it’s the best show they’ve ever seen.”

This tour’s live extravaganza is based on the band’s mobile app and follows Eddie as he travels through interlocking worlds. It offers state-of-the-art pyrotechnics, muskets, claymores, a replica Spitfire plane, a giant Icarus, and flame-throwers.

On the heels of the sold-out European leg of the tour, Iron Maiden kicks off the first show of the North American portion of the Legacy of the Beast World Tour July 18 at BB&T Center in Sunrise.

Harris says fans can expect classics such as “2 Minutes To Midnight,” “The Number of the Beast,” “Run to the Hills,” “Hallowed Be Thy Name,” and “The Trooper,” as well as deep cuts like “Flight of Icarus,” “Sign of the Cross,” and “The Clansman.”

Harris’ thundering bass will undoubtedly be a highlight for both die-hards and newer followers who might never have experienced such unprecedented stage antics set to exploding music.

“I can’t describe it very well myself, really,” Harris says of why his bass lines are such a uniquely inexorable part of Maiden’s sound. “I find it natural to write on the bass, and a lot of people find that really odd. It’s not the usual way, and it takes [the other members] out of their comfort zone. But that’s not a bad thing.”

Harris remembers a time in 1993 when the bandmates were definitely taken too far out of their comfort zones — and it was a bad thing. Bruce Dickinson, whose operatic voice had become synonymous with Maiden’s blistering sound since he joined the band in 1981, abruptly quit.

“We’ve all been sort of alpha males, and we weren’t communicating with each other, and I think that was sort of the problem back then,” Harris says.

Dickinson rejoined Maiden in 1999, and today the band’s maturity would likely prevent any kind of repeat, Harris says. “Everyone would just sit down and talk about it,” he says of whatever issues might arise. “We get on great. We’ve always got on really well. People read more into it than there is.” 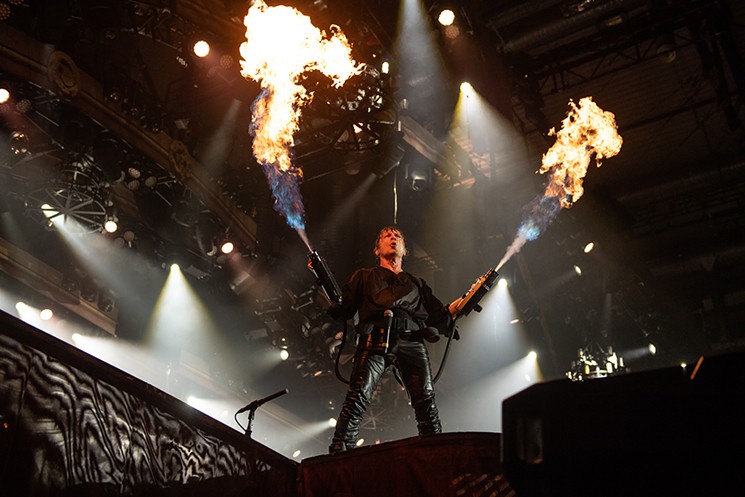 Iron Maiden boasts the most elaborate, pyrotechnic-heavy stage shows in the world of metal.
Photo by John McMurtrie
Maiden went on to snag the 2011 Grammy for Best Metal Performance for “El Dorado,” beating out Korn, Megadeath, Lamb of God, and Slayer. Though the win was an honor, Harris says, other Maiden nominations, such as “Blood Brothers,” “Fear of the Dark” and “The Wicker Man,” might have been more deserving.

“To be honest with you, I think we ended up getting it for a song which I thought was not one of our best ones,” he says. “I didn’t think we really deserved it for that one but maybe one of the others. So it was a bit off, really.”

Harris credits Maiden’s longevity to “years and years on the road” and a diverse, international fan base that is particularly robust in Europe and South America.

“When we started off, we weren’t even thinking of being a global band. We just ended up becoming that,” he says. “That wasn’t the goal to start with. You just try different things, and here we are.”

Harris, who is from England, now lives in the Bahamas. He moved there 12 years ago after falling in love with the country in 1983, when Maiden recorded its first album in the islands. They'd go on to record three more in the Bahamas as well.

“One of the reasons for going there was to force me to chill out a little bit, but I don’t think it’s really worked,” he says, laughing. He also has a condo in Fort Lauderdale and says he likes to pop over for quick trips.

Harris is happy to see Maiden’s loyal fans now bringing their kids and grandkids to shows and says metal is a genre that’s not going anywhere.

“People get into metal and they don’t drift away from it,” he says. “They might have families and move away a little, but they certainly don’t forget about it.”

Iron Maiden. 7:30 p.m. Thursday, July 18, at BB&T Center, 1 Panther Pkwy., Sunrise; 954-835-7000; thebbtcenter.com. Tickets cost $45 to $249 via tickmaster.com.
KEEP MIAMI NEW TIMES FREE... Since we started Miami New Times, it has been defined as the free, independent voice of Miami, and we'd like to keep it that way. With local media under siege, it's more important than ever for us to rally support behind funding our local journalism. You can help by participating in our "I Support" program, allowing us to keep offering readers access to our incisive coverage of local news, food and culture with no paywalls.
Make a one-time donation today for as little as $1.