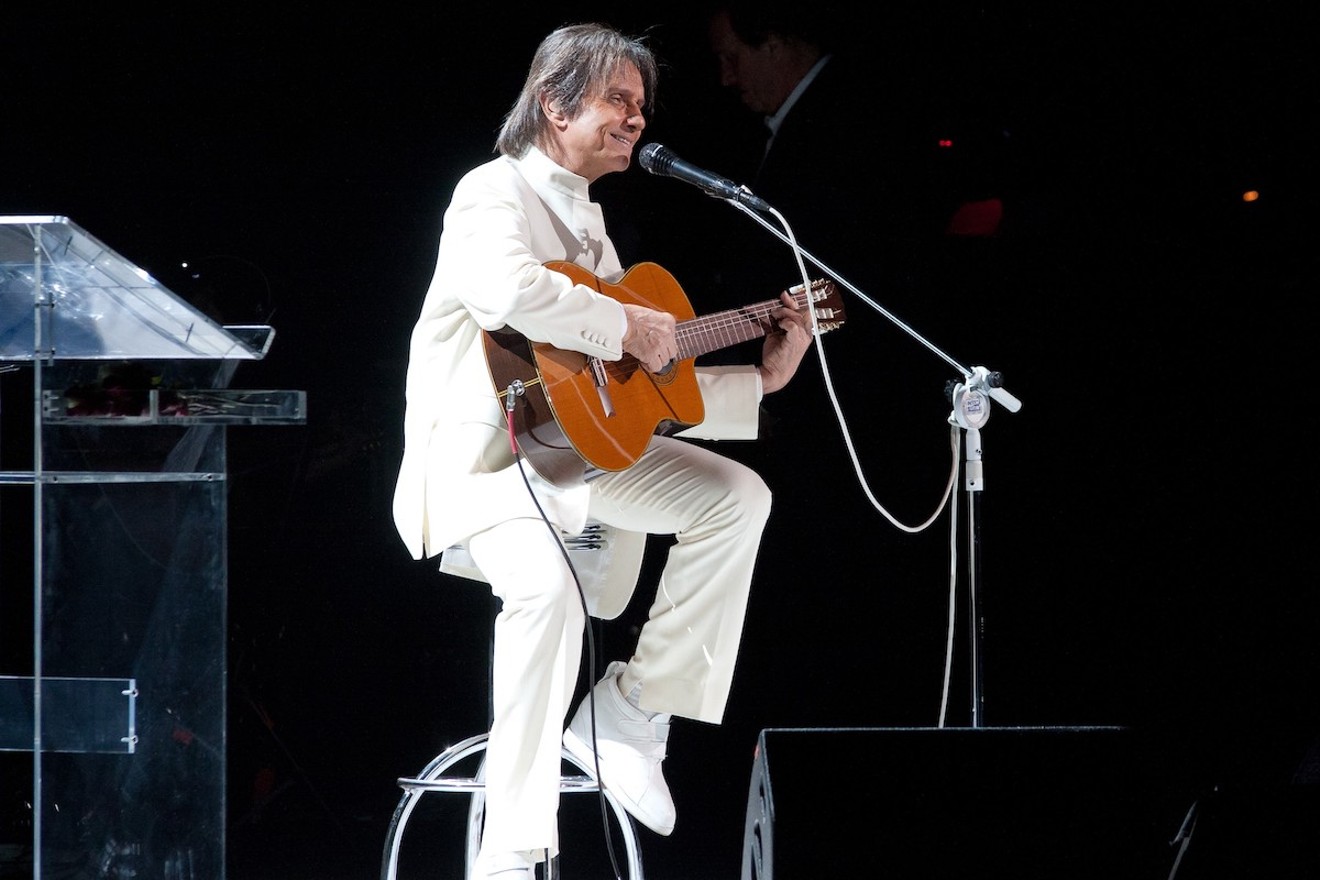 Roberto Carlos in action Photo by Caio Giradi
As far as Brazilian fans go (at least those of, ahem, a certain age), Elvis is not king. The performer who holds that regal title for them is Roberto Carlos, who at 81 years of age still manages to score Top 40 hits in his homeland and across the adult Latin market despite what folks a quarter his age might do.

While many of his contemporaries’ new releases are relegated to classic rock or oldies radio stations, his songs still get plenty of airplay. His song "Esse Cara Sou Eu" — released in the Spanish-speaking market as “Ese Tipo Soy Yo” — topped the Billboard Brasil Top 100 chart in 2012 and served as the theme song for the Brazilian soap opera Salve Jorge.

Browse TuneIn, Pandora, or Spotify's Brazilian radio stations, and it's nearly impossible not to stumble into one of his songs — even if in the form of covers from contemporary acts like Paula Toller, Adriana Calcanhoto, and Maria Rita or rock bands like Skank, Paralamas do Sucesso, and Titas.

Despite the success of his 60-year career, what Carlos is really passionate about is performing is live — something that he hasn’t done since the pandemic hit.

“I spent my time writing songs,” he tells New Times via email when asked how he spent his time during the COVID lockdowns. “I plan to release them in the near future.”

Carlos' setlist for his live performances, which is split between Spanish- and Portuguese-sung tunes, has not varied much over the years, but he promises that fans can expect a few changes since his last U.S. tour.

“I am always thinking of what fans in the U.S. want to hear,” he explains. “However, we also included songs that were not on the roster last time around, and I am always trying to find a balance between the two languages.”

If you're wondering how he keeps his vocal cords in shape after all these years, Carlos credits his phono-audiologist, Dr. Mara Belay, and his own self-discipline.

“I don’t smoke and try to keep a healthy lifestyle,” he says.

Which is to say fans can expect the same pristine voice when the Brazilian crooner kicks off his U.S. tour at FTX Arena on Friday, April 22. The 12-city run will continue on to places like Boston, New York, and Los Angeles.

Says Carlos of the tour: "I am very happy to meet my fans and share this love and affection that exists between us."

Roberto Carlos. 8 p.m. Friday, April 22, at FTX Arena, 601 Biscayne Blvd., Miami. 786-777-1000; ftxarena.com. Tickets cost $55.24 to $295.24 via ticketmaster.com.
KEEP MIAMI NEW TIMES FREE... Since we started Miami New Times, it has been defined as the free, independent voice of Miami, and we'd like to keep it that way. With local media under siege, it's more important than ever for us to rally support behind funding our local journalism. You can help by participating in our "I Support" program, allowing us to keep offering readers access to our incisive coverage of local news, food and culture with no paywalls.
Make a one-time donation today for as little as $1.
Ernest Barteldes