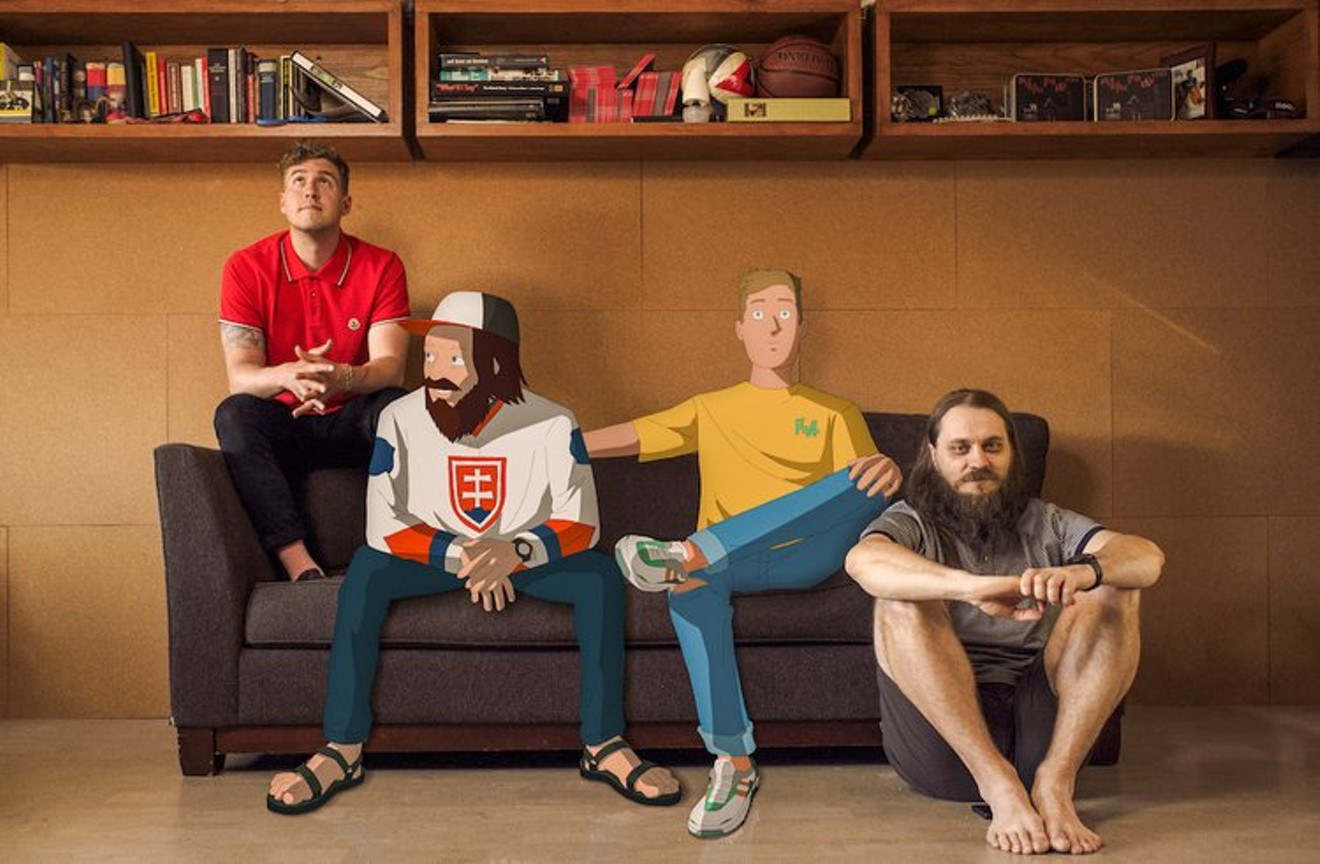 James and Jared Priestner of Rare Americans Photo by David Astorga
Rare Americans have one of the unlikeliest origin stories of any act out there. Ten years ago, singer James Priestner was a professional hockey player for the Western Hockey League when he found a productive way to kill the endless time while on the road.

"I had all this spare time since I had no family around," James tells New Times. "So I bought a guitar. Very quickly, I wrote my first song and I was hooked."

That was how James became a musician, but how Rare Americans came to exist is an even unlikelier story. James and Jared Priestner booked a vacation in the Caribbean for some brotherly bonding.

"Jared's a lot older than me. I think he moved out of the house when I was 7, so we thought this would be a good trip to get reconnected," James says. "I was in school for music production at the time, so I joked let's write a song together on vacation. He said, 'Screw that! Let's write an album.' Fifteen songs later, that's what we did."

The brothers' first self-titled album came out in 2018 and quickly found an audience yearning for wordy and whimsy pop-punk reminiscent of They Might be Giants. The enthusiastic Canadian siblings shot six music videos for those songs, with one of them being animated. The cartoon aesthetic quickly became the band's calling card.

"The rapper Killer Mike had a cool video for the song "Reagan." We found the animator and director, and he did our video for "Cats, Dogs & Rats." That was the video that connected with people," James explains.
Rare Americans have now released close to 20 animated music videos, the latest of which is "Run the World," which depicts the story of an underdog dealing with a bully.

"Everyone else is doing live-action videos," James quips. "We thought animated videos could be a niche for us. Plus, our songs usually tell stories, and to film them live-action would be a lot more expensive."

The entirety of the band's new album, You're Not a Bad Person, It's Just a Bad World, in fact, has a focus on positivity.

"This is a very strange time. The pandemic world was more divisive and polarizing than ever," James notes. "So many things you have to have an opinion on. I find it personally challenging to have opinions on everything. You're Not a Bad Person, It's Just a Bad World is telling everyone give yourself a pat on the back, you're probably doing just fine."

According to James, Rare Americans' live shows are also a uniquely positive experience. During this tour, the band from British Columbia in the Pacific Northwest makes its live debut in Florida.

"It's a high-energy show. People should prepare to jump around and sing a lot," he warns. "We're quite interactive. We get the crowd involved and try to answer all their questions."

To get the band hyped up before running onto the stage, James looks to his rituals from his hockey days.

"I'm the most ritualistic one in the band. I'll box with Lupo, our guitarist, right before to get the juices flowing," he says. "We have a team huddle and I'll give the band a ten-second pep talk. I make them up on the spot. Like we were at Portland, and I said, 'Last time we were here, there were only 50 people to see us, now there's 500. Let's do it. Rare Americans on three — one, two, three!'"

Rare Americans. With Dylyn. 7 p.m. Saturday, October 1, at Gramps, 176 NW 24th St., Miami; gramps.com. Tickets cost $15 via eventbrite.com.
KEEP MIAMI NEW TIMES FREE... Since we started Miami New Times, it has been defined as the free, independent voice of Miami, and we'd like to keep it that way. With local media under siege, it's more important than ever for us to rally support behind funding our local journalism. You can help by participating in our "I Support" program, allowing us to keep offering readers access to our incisive coverage of local news, food and culture with no paywalls.
Make a one-time donation today for as little as $1.