Tyler the Creator Brings the Unexpected to the James L. Knight Center 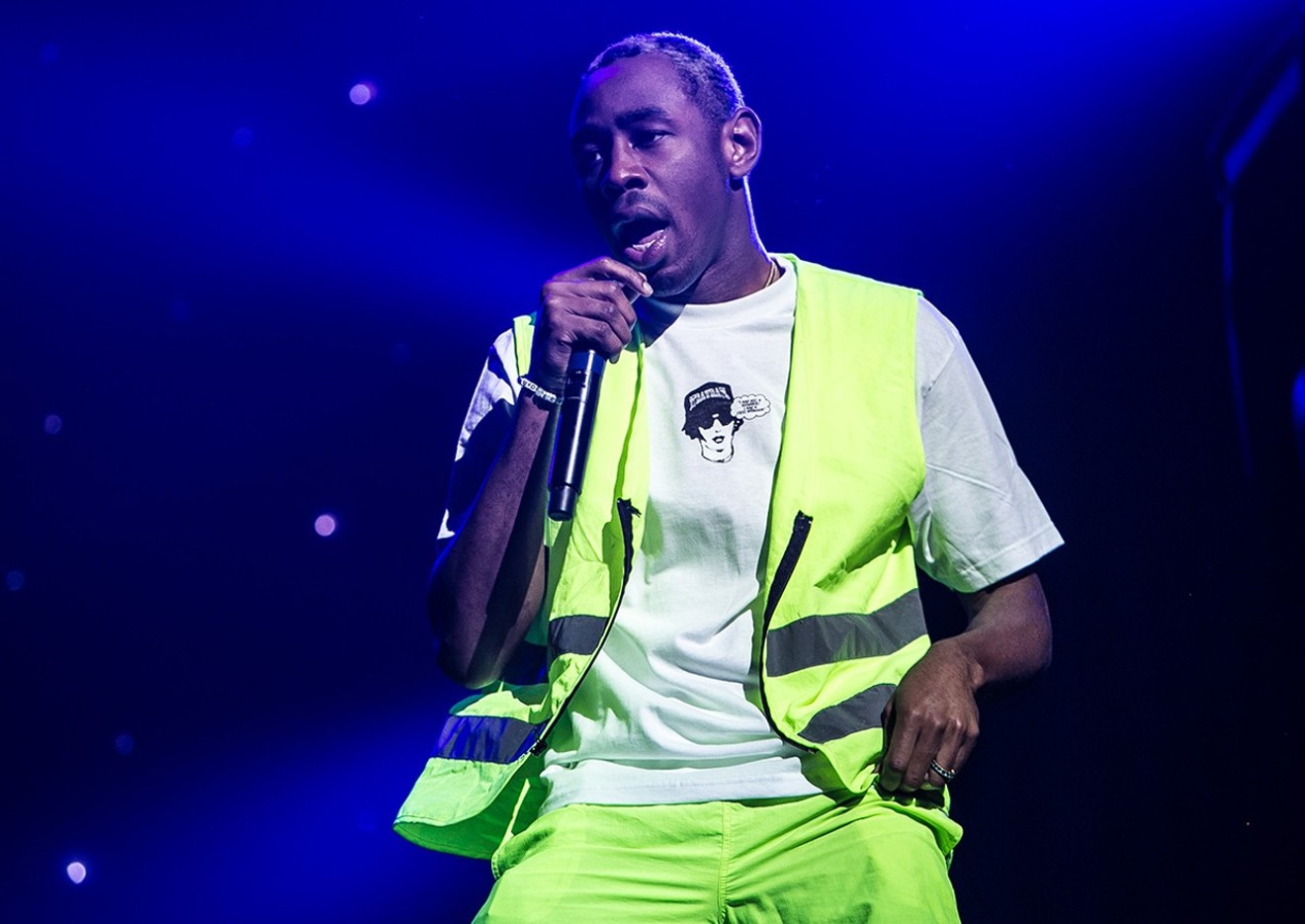 See more photos of Tyler the Creator's performance at the James L. Knight Center here. Photo by George Martinez
For some millennials, attending a Tyler the Creator show is either a rite of passage or a bucket list item. They remember the raucous Odd Future shows on Adult Swim’s Loiter Squad, when Tyler and other members of the massive hip-hop group would launch off the stage into the crowd.

Well, Odd Future is no more, and Tyler’s music has become less boisterous. Though the audience at last night's sold-out show at the James L. Knight Center probably expected something close to Tyler’s recent NPR Tiny Desk Concert — an intimate performance with a band, playing real instruments — they got something entirely different.

He began the show in a tree. Specifically, he stood on a ramp made to look like a fallen redwood, with two more tree set pieces in the onstage and a curtain of starry lights as the backdrop. Looking like a well-funded high-school production of A Midsummer Night’s Dream, it was surely the most purely theatrical stage setup a rapper has ever come up with. He wore a neon-green vest and matching shorts that made him look like a crossing guard. His buzzed hair was leopard-spotted. Coming down from the platform, he barreled across the stage for up-tempo tracks such as “Mr. Lonely” and led sing-alongs for crowd favorites like “Boredom” and “See You Again.” Under the ultraviolet lighting, the vest turned fluorescent, and his dark skin glowed a deep purple.

See more photos of Tyler the Creator's performance at the James L. Knight Center here.
Photo by George Martinez
Between songs, the audience got a glimpse of his personality: playful, childish, and off-the-cuff, like an overgrown preteen or a 21st-century Peter Pan. Beyond this, he seemed rather skeptical of his own celebrity. He spent most of his banter time busting the audience’s chops for chanting his name (“I literally know my name — you don’t have to do that.”), grabbing at a sweaty towel he threw into the crowd (“Fucking disgusting”), and, before diving into old material, chastising “you elite motherfuckers who’ve been a fan for forever” and almost apologizing to newer fans familiar with his latest, most successful album, Flower Boy.

The reason is that, though all of Tyler’s music tackles themes of love and loneliness, the older stuff is considerably darker. It’s strange to hear softer, emotionally mature tunes such as “911” and “Garden Shed” paired with the festival of violence and perversity that is “Yonkers.” Then there was the Frank Ocean-featuring “She,” the greatest stalker anthem since “Every Breath You Take.” Make no mistake, the early stuff is proficient, exhilarating songwriting — Tyler is quite good at making songs that sound romantic on first read but crumble into depravity upon a closer look. The contrast with the poppier new stuff is shocking.

An even deeper contrast came with the opener, Vince Staples. Tyler's fellow Southern Californian began his career making dark, unglamorous gangsta rap, and on his latest record, Big Fish Theory, he dabbles in dance and techno. So the lead-in to Tyler’s technicolor dreamscape was a stylish, monochromatic performance where Staples’ stage presence was diminished by smoke, shadows, and a massive grid of video screens. Archival footage of waves, wildlife, abandoned houses, etc., all in sumptuous black-and-white, played in back as atonal, beat-driven industrial rap boomed through the speakers.

See more photos of Tyler the Creator's performance at the James L. Knight Center here.
Photo by George Martinez
Staples was formerly known for his humorous brand of stage banter — during a show, he once threatened to confirm to a fan that Kanye West enjoyed Gucci Mane by calling Kanye himself — but it appears that he has tired of it or that he wants to create an experience greater than himself. At certain points, in the dark, smoky room, where one could hear only the rapper’s voice, it seemed as if he wasn’t even there.

In the end, the evening was simply spectacular, combining the energy of the old Tyler with the vitality of the new and giving away something for everyone. Even a few mosh pits opened up during hype tracks like “Who Dat Boy” and “I Ain’t Got Time!” and a fight broke out after the show had wrapped. It seems you can take Tyler out of Odd Future, but you can’t take Odd Future out of his fans.