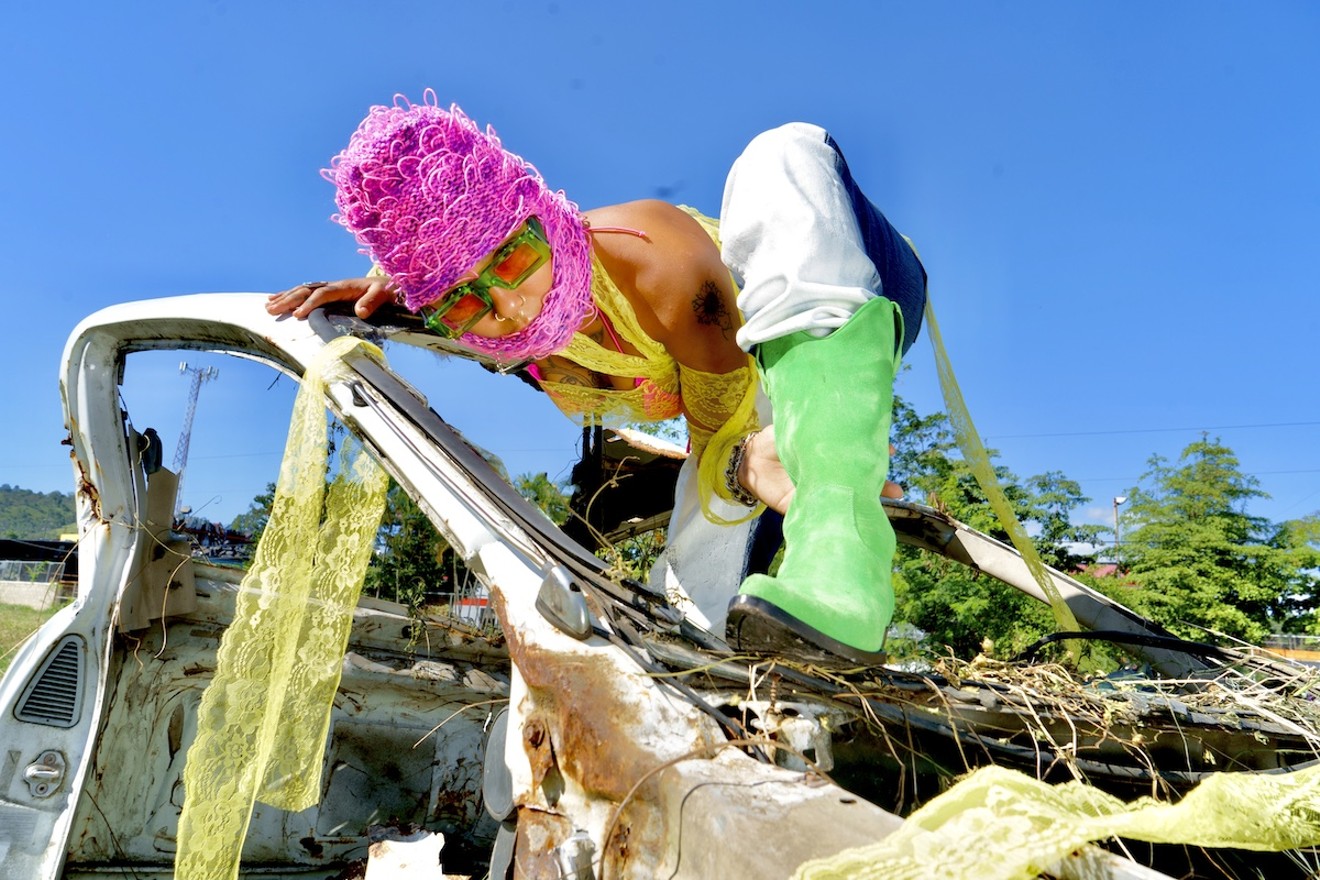 Tokischa's meteoric rise continues despite her raw, uncensored honesty. Photo by Raymi Paulus
Update: Due to weather, Tokischa's concert originally scheduled for Saturday, June 4, at Oasis Wynwood has been rescheduled for Friday, June 10.

"Soy La Santa Popola" ("I'm Saint Vagina"), she tells one unsuspecting Billboard Latin Music Awards red-carpet correspondent as the camera scans her outfit, from the headgear — a cross between a Conehead and a nun's habit — to the crucifix resting at her belly, to the chalice and disembodied hand of God drawn onto latex dangling between her legs.

"¡Bien, eso me gusta!" ("Good, I like it!") responds the poor soul, blissfully oblivious to the meaning of the lewd term Tokischa has just spoken into a microphone on international television.

Courting controversy through the suggestive use of latex and religious imagery at awards shows is nothing new, of course. It might be the oldest trick in the modern playbook: Madonna employed it when she humped the stage in a virginal white wedding dress at the 1984 Video Music Awards, and Miley Cyrus stoked the weeks-long ire of Fox News when she twerked on Robin Thicke in nude PVC shorts nearly three decades later.

Tokischa has clearly studied this playbook and annotated its margins. During her debut performance at Premios Billboard later that night — a collaboration with Rosalía — she replicated the Madonna-and-Britney blueprint by kissing the Spanish singer onstage at the end of the song. (Unlike Britney, Madonna, and Rosalía, Tokischa is proudly out as bisexual.)

Speaking to New Times via Zoom from the northern coastal resort town of Cabarete — located at the northern coast of the island and a far cry from her humble beginnings in Los Frailes, a neighborhood in East Santo Domingo — Tokischa stresses that she has been an iconoclast since childhood. Asked about early influences, she responds with the name of another musical provocateur with a controversial past: Mexican singer-songwriter Gloria Trevi. She mentions reggaeton, too, but she's most animated when she recalls discovering dembow and sneaking out to listen to it at around age 11 or 12. She says the genre, which is known for its explicitness and has been sanctioned by the Dominican government, was verboten during her upbringing.

"With the curse words and the expression — I loved it," she says. "When I was alone at home, I'd play it as loud as possible." 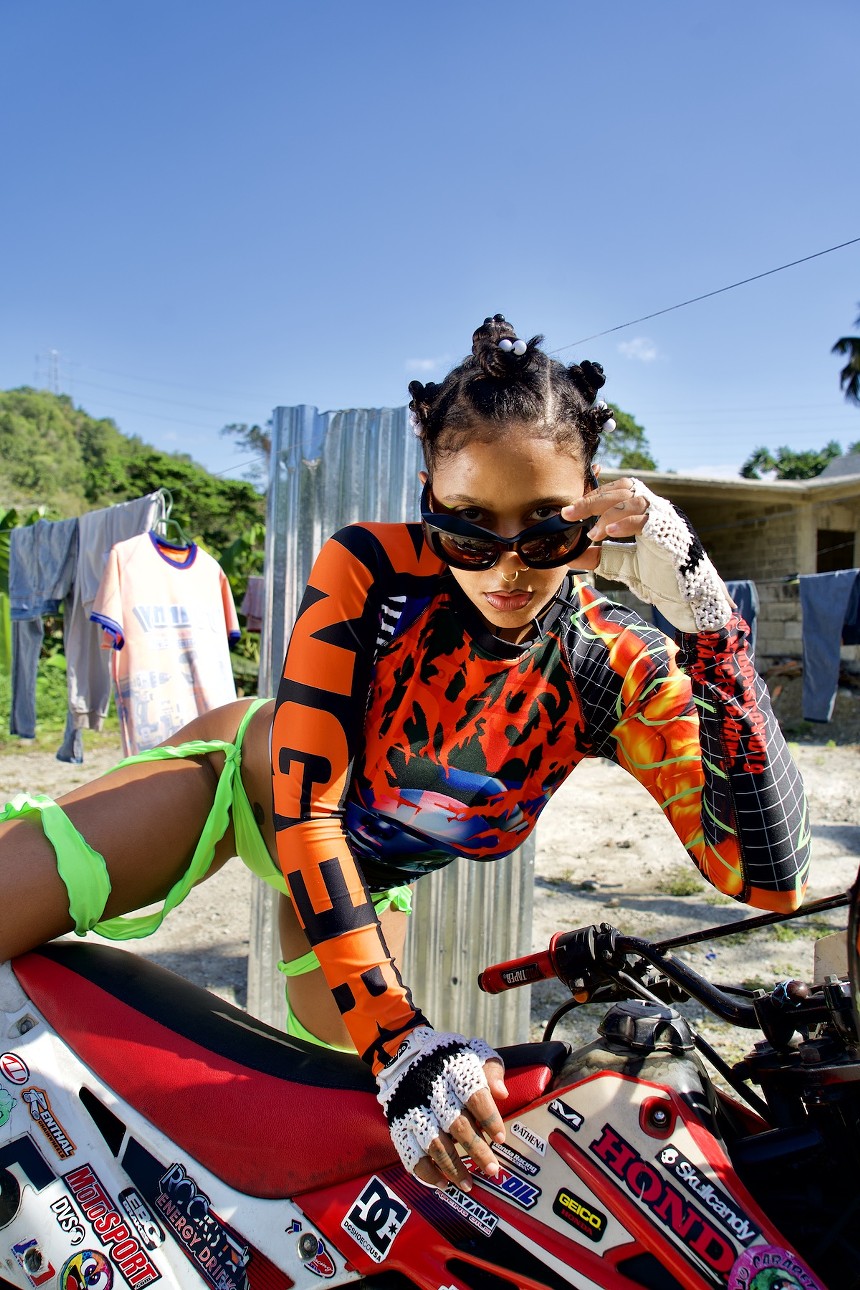 Government warnings meant to steer kids away from Tokischa's music have had the opposite effect.
Photo by Raymi Paulus
Now 26, Tokischa is the one who's angering government officials and eliciting warnings about corrupting youth. Last summer, she was fined for taking lingerie photos in front of a mural of her namesake, the Virgin of Altagracia, in the Dominican Republic's La Vega province. (Tokischa's middle name is Altagracia.) The caption: "Sluts pray, too." She issued a public apology, but the contentious post remains on her Twitter account.

Her latest song, "Estilazo" — a classic house collaboration with Marshmello primed for Pride brunch at the Palace on Ocean Drive — doubles as a mission statement for her debaucherous artistry and a celebration of, as she sings on the track, "divine filth."

"Being a bad bitch is fashionable," she sings. "If you upload your ass to Twitter/You'll get thousands of likes/Money for drugs/To buy happiness/Orgies at home/Let's celebrate."

Institutions' attempts to ban her have had the opposite effect. In recent months, she has become the latest "it girl" pushed by the ever-surging Latin music industry. In addition to the aforementioned, tepidly received "Linda," Tokischa collaborated with Rosalía on "La Combi Versace," the penultimate track on the Spanish singer's critically acclaimed third album, Motomami. It was a notable vote of confidence, with the Weeknd being the only other artist featured on the record.

In conversation, Tokischa possesses a mischievous, childlike playfulness cut by sharp wit. It's clear she has learned how to charm her way out of uncomfortable situations in her two-and-a-half decades on the planet.
After her mom left for New York in search of work when Tokischa was a toddler, she bounced back and forth between relatives' homes. Throughout her adolescence, she cultivated her artistic inclinations through theater, dance, and writing. After high school, she turned to the lucrative sugar-daddy and prostitution industry on the island. She's candid about this time in interviews, recalling hard drug use and showering after sex in attempts to wash off the smell of unwanted partners. For a time, she says, her money went to drugs. But after she met producer and eventual manager Raymi Paulus, she took the money she'd saved from sex work and invested it in her music.

“Since I began to make music," she tells New Times, "The first thing I said was that I would be honest, that I would say what I was living through because I wasn’t going to invent a movie.”

Plenty of artists lean toward fantasy rather than biography. Why couldn't that work for Tokischa? Because her past, she counters, "was what I could speak about with pride. I was empowered."

Her unapologetic approach has resulted in a slew of labels projected upon her: queer, bisexual, sex-positive, sex worker, putona. One particular label is the subject of heated arguments on YouTube comment sections: Is Tokischa a feminist? Earlier this year, she angered people on both sides of the debate when she voiced support for fellow Dominican dembow artist Rochy RD, who is accused of sexually assaulting a minor who was a purported trafficking victim. That came just a few months after Tokischa issued a halfhearted apology for her role in "Perra," a collaboration with J Balvin that compares horny women to dogs in heat, and an accompanying video in which Balvin, a white Colombian man, walks two Black women on leashes. "I’m truly sorry that people felt offended," Tokischa told Rolling Stone at the time. "But at the same time, art is expression."

Asked by New Times if she better understands why people were upset, the rapper with the reputation for raw honesty becomes uncharacteristically cagey.

“I just feel that, la que no es perra no esta de moda (a person who isn't bad bitch isn't fashionable),” she laughs, quoting her song with Marshmello before summarizing the intent of the song. “Being a perra is an expression, too — of feeling powerful, of feeling bacana (cool or great)." Reminded that the backlash largely stemmed from the racial undertones of the video, not the lyrics to the song itself, she retreats to another halfhearted mea culpa: “There was no intention to hurt anyone or anything. Everyone made it with lots of love because it was something super-creative, super-different, super-fun. Those who aren’t perras felt that way.”
Now stepping onto the international stage, Tokischa is adapting to a wider audience (and, inevitably, increased scrutiny). She's also coping with an increasingly packed travel schedule. "Es una locura (it's crazy)," she says of the pace, adding that she loves her time onstage but prefers to stay home in DR. She quit drugs almost three years ago, though she began drinking again in December.

“I got to a point where I felt I was moving away from my desacatá (rebellious) self," she says, adding that she's been doing some devotional writing lately. "I was so sober and so spiritual, and so on that vibe, that I felt removed from el teteo (partying). I have to find that balance because I have my career, which depends on my rebellion, on my story; but I also have my spirituality, which depends on me. It’s a duality I have, and I’m managing it well. I think I have a good balance. If I didn’t have that balance, I’d be too rebellious,” she says with a laugh.

One wonders whether the exploitative nature of the music industry might be overwhelming — too much, too soon — for a woman in her mid-twenties who just a handful of years ago lived in a constant state of fight-or-flight.

Tokischa reflects on how her past may have prepared her for this moment: “I lived an existence that wasn’t pleasant. But possessing the strength to resist and to keep struggling for what I wanted, despite the fact that what I was doing was super uncomfortable. I feel that this moment I’m living through right now, beyond being prepared for it, I feel it is a prize for me. It is a moment of realization of what I dreamed of, what I worked for, why I did everything I did.”

She has certainly mastered the art of persuasion, and her conviction is convincing.

Tokischa. 9 p.m. Friday, June 10, at Oasis Wynwood, 2335 N. Miami Ave., Miami; oasiswynwood.com. Tickets cost $35 to $125 via tixr.com.
KEEP MIAMI NEW TIMES FREE... Since we started Miami New Times, it has been defined as the free, independent voice of Miami, and we'd like to keep it that way. With local media under siege, it's more important than ever for us to rally support behind funding our local journalism. You can help by participating in our "I Support" program, allowing us to keep offering readers access to our incisive coverage of local news, food and culture with no paywalls.
Make a one-time donation today for as little as $1.