Chromeo shone at HOC 2018. See more photos from House of Creatives 2018 here. Photo by Michael Campina
After a successful third year, House of Creatives Music Festival has proven it has staying power with Miami’s concert-attending public.

This year marked the festival’s second outing in Virginia Key Beach Park, a location that an increasing number of Miami gatherings are viewing as enviable for a party. Between the wide-open field hosting the main stage, the pleasant surprise of the occasional gust of bayside breeze, and the relaxed atmosphere offered by the beach, Virginia Key is an ideal setting for House of Creatives’ laid-back mood.

The clear winner of the weekend was festival headliner Chromeo. Despite performing Saturday sans the all-reflective stage installation that’s become a hallmark of the duo's recent shows, David “Dave 1” Macklovitch and Patrick “P-Thugg” Gemayel reiterated through stage presence alone that Chromeo remains one of the best live acts touring today. Their set was heavy on Fancy Footwork and White Women favorites, with the early one-two punch of “Bonafied Lovin’” and “Somethingood” proving particularly electrifying.

After a jubilant, if truncated, live performance on the festival’s main stage, the self-proclaimed Funklordz took to the beachside DJ booth for a late-night set. Despite the occasional drop of rain or two the preceding hour, there were few hints of the torrential downpour that would eventually ensue.

Chromeo. See more photos from House of Creatives 2018 here.
Photo by Michael Campina
Far be it from festival organizer Mishu to let a little water stop a good time. House of Creatives employees and Chromeo worked in tandem to keep the party going through little more than a tarp, a moderately sized E-Z Up tent, and a shared can-do attitude. What followed was one for the books: As Chromeo ran through selections from Solomun and Purple Disco Machine, attendees came together to keep the tarp hoisted over themselves and the DJ booth. Even with rain pelting everyone from the outside and beats banging from within, it didn’t seem as though anyone minded or missed a step — fancy footwork in motion.

Although adverse elements couldn’t elevate every act’s set to legendary heights, Chromeo was far from the only act to shine over the weekend. Miami-based master selector and Electric Pickle fixture Terence Tabeau took full advantage of the striking scenery late Saturday night and ran through a mix that felt as funky as it did exotic. Fellow DJs Pillowtalk and Amtrac kept the party going the following night via heady dance-floor hits alongside timeless crossover classics. 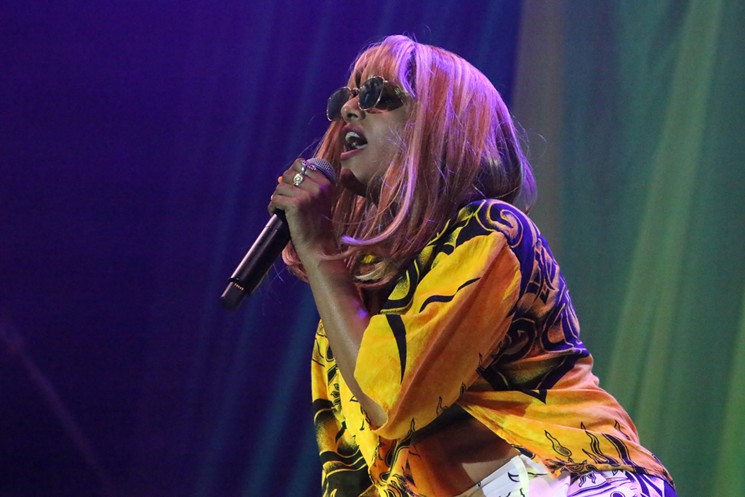 M.I.A. See more photos from House of Creatives 2018 here.
Photo by Michael Campina
The main stage entranced House of Creatives attendees via acts that ran the gamut from Swedish synth-pop bands to raucous, world-traveling rappers. Following the soothing, inimitable vocals of Little Dragon singer Yukimi Nagano, M.I.A. closed out the festival with her trademark politically charged flamboyance and a career-spanning set covering everything from “Bucky Done Gun” to her era-defining hit “Paper Planes.”

Though it’s hard to top the hilarity of M.I.A. bringing a goofy troupe of male festivalgoers onstage for a rousing rendition of “Boyz,” House of Creatives had more than enough moments of musical madness to enshrine it as a more low-key (but no less enjoyable) alternative to the wild rides offered by larger festivals such as Ultra and III Points. If House of Creatives keeps up the vibe, the fest will have carved a comfortable niche in Miami's musical landscape.
KEEP MIAMI NEW TIMES FREE... Since we started Miami New Times, it has been defined as the free, independent voice of Miami, and we'd like to keep it that way. With local media under siege, it's more important than ever for us to rally support behind funding our local journalism. You can help by participating in our "I Support" program, allowing us to keep offering readers access to our incisive coverage of local news, food and culture with no paywalls.
Make a one-time donation today for as little as $1.