As New Times has repeatedly emphasized in the past week, U2 continues to command public fascination. Miami proved as much last night, when a legion of fans took to Hard Rock Stadium to witness the Irish quartet reprise its celebrated fifth album, The Joshua Tree, in commemoration of the record’s 30th anniversary. Even with the suffocating humidity and confused political stances, Miamians still found plenty of reasons to rock out.

Watching U2 in 2017 is akin to observing a well-oiled machine: There’s very little room for deviation or spontaneity, but hell if it doesn’t get the job done. The band kicked things off in an appropriate fashion with “Sunday Bloody Sunday”; as soon as the stadium lights switched off, the phone cameras came on, which was fine, as long as you weren’t standing behind a row of people watching tiny pixelated versions of the show on their screens.

The band played in chronological order for the remainder of the night, with cuts from War and The Unforgettable Fire preceding the main event: The Joshua Tree, played in its entirety. 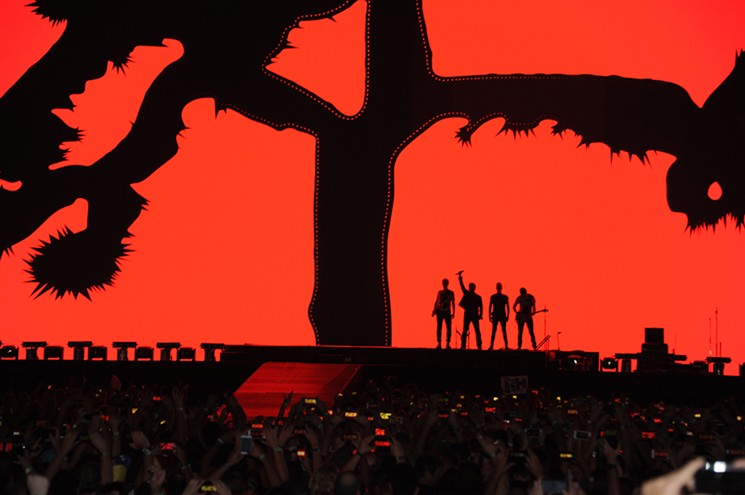 The Joshua Tree is an unusually front-loaded album. The back-to-back-to-back-to-back-to-back of opener “Where the Streets Have No Name” all the way into “Bullet the Blue Sky” is a staggering one, and it has lost none of its power 30 years onward. Awash in a crimson red, the band performed in front of a silhouette of the album’s titular tree before shifting to visuals of an empty road that might be nameless. “I Still Haven’t Found What I’m Looking For” and “With or Without You” took the audience on a black-and-white journey through Death Valley National Park in California, where the album’s cover and inner sleeve were photographed. The visuals shifted to a camera that tracked and distorted the bandmates' onstage movements for “Bullet the Blue Sky,” applying a sinister and disorienting black-and-white filter over them.

The audience was filled with children accompanied by their parents, many of whom were no doubt sharing a moment over The Joshua Tree’s more resonant material. Although it’s usually poor concert etiquette, the sight of a mother FaceTiming her daughter during the haunting album closer “Mothers of the Disappeared” felt appropriate.

After the band returned for the requisite encore, it proved to be a difficult task to match the heights of The Joshua Tree set. Performing songs from 1991’s Achtung Baby through 2004’s How to Dismantle an Atomic Bomb, U2 — or, more specific, Bono — used the latter songs in the show to be more explicitly political. The spotlight on Syrian refugees during the band’s lesser-known track “Miss Sarajevo” was affecting, and the juxtaposition between youth and tragedy is a theme the band has explored since Boy. Less successful and significantly more annoying was Bono’s explicit praise of Miami's own Sen. Marco Rubio, which was quickly followed by implicit criticism of President Donald Trump for his administration’s proposed budget cuts to foreign aid. It’s futile at this point to complain about Bono’s compromise-centric, middle-of-the-road politics, but it doesn’t make them any less irritating or distracting, especially when the senator in question has repeatedly aided and abetted the nation’s would-be authoritarian.

Hard-core U2 fans couldn't ask for much more: The anthemic tunes and spectacles for which the band’s live shows have become famous were in abundance last night. And though countless tracks are worthier of the status of show closer than “Vertigo,” the band's set was a healthy encapsulation of everything that has endeared U2 to audiences for the past three decades. Let's hope another five years won't pass before we get to hear Bono awkwardly refer to Miami as “a sexy city” with “sexy people” again.