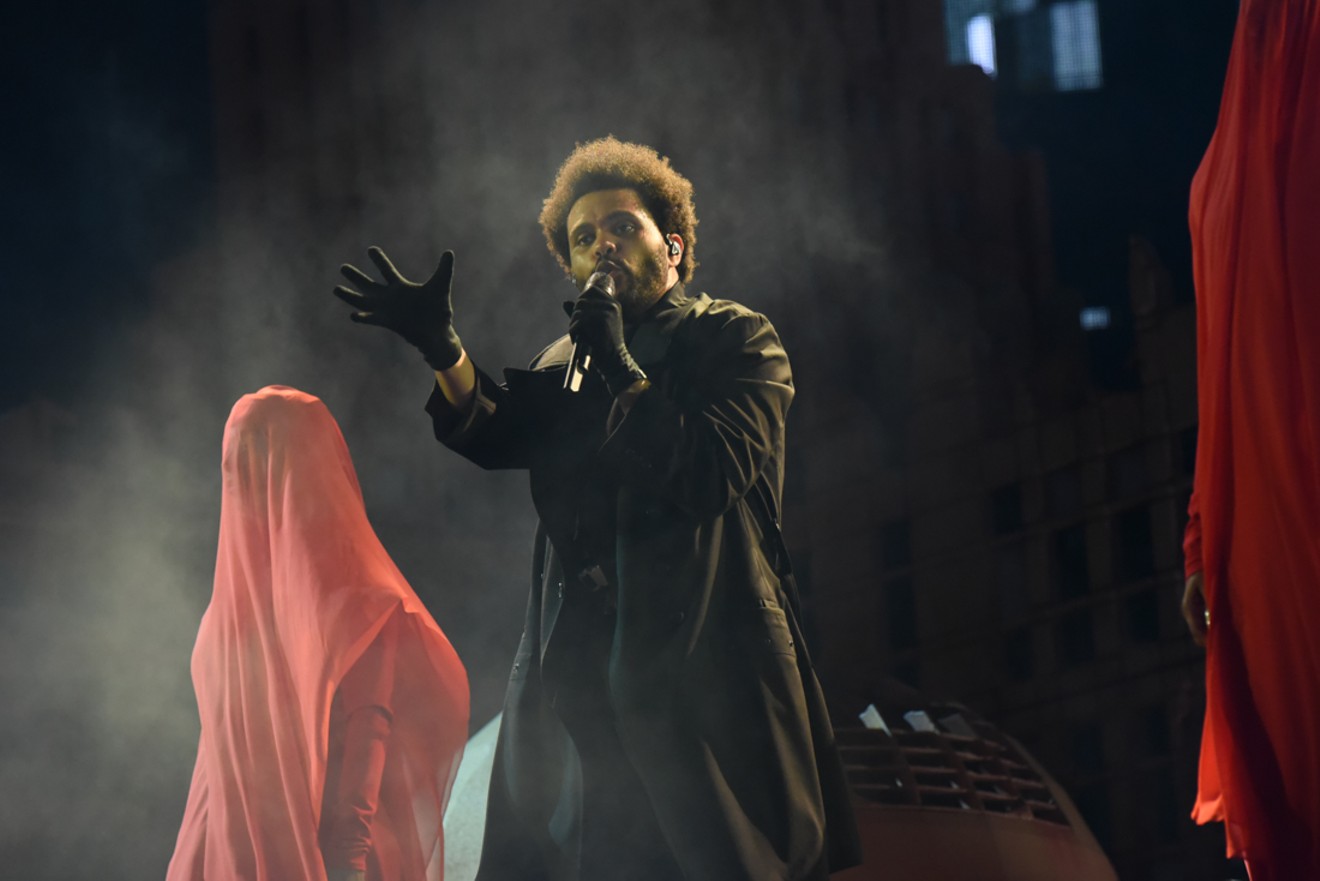 The Weeknd brought his After Hours Til Dawn Tour to Hard Rock Stadium on Saturday, August 6. See more photos from the Weeknd's performance at Hard Rock Stadium here. Photo by Michele Eve Sandberg
"Miami, do you motherfucking love me?!" sang the Weeknd to his sold-out Hard Rock Stadium crowd to the tune of his "How Do I Make You Love Me." Miami does indeed love the artist, and the crowd screamed back their enthusiastic response and sang the lyrics in time with the prescient pop star.

Abel Makkonen Tesfaye, stage name the Weeknd, rocked a sold-out house Saturday night on the ninth stop of his After Hours Til Dawn Tour. The openers were synth GOAT Mike Dean and Haitian-Canadian record producer Kaytranada; both acts hyped the crowd in preparation for the main event.

At 8:15 p.m., 45 minutes before the Weeknd was supposed to take the stage, the crowd was already roaring with anticipation. Every few minutes, a section started to scream as if the artist had taken the stage, which would trigger a frenzy of fans to stand on chairs and whip out their phones even though the tech producers clearly were still onstage preparing. This was a massive indication of how ready the fans were for his long-delayed tour.

At 9:11 p.m., Tesfaye made them wait no longer.
click to enlarge

See more photos from the Weeknd's performance at Hard Rock Stadium here.
Photo by Michele Eve Sandberg
Constructed of large post-apocalyptic-looking buildings, the stage setup featured dilapidated tops of skyscrapers, smoke, and lights from which Tesfaye rose to start the show with "Alone Again" from the album After Hours. A posse of veiled dancers dressed head-to-toe in bright red, flowing fabric and moved in rhythmic circles, reminiscent of a religious ritual. The Weeknd, on the other hand, was in an all-black ensemble, including a trench coat with a red silk lining and black gloves. Noticeably lacking was his famously bruised nose bound with medical tape. (Luckily, many fans came to show sporting the signature look.)

Behind the buildings on stage, the screen filled up with a cityscape  — sometimes a beautiful sunset, sometimes a burning inferno, depending on the point in the show. To begin, the city was framed by a colorful sunset with Tesfaye clothed in black and bathed in a white spotlight. Below, in the city streets, the dancers stood solemnly and watched the crowd.

The Weeknd stayed at the front main stage for the first few songs as he ran through "Gasoline," "Sacrifice," and "How Do I Make You Love Me?" with the smooth vocals and Jackson-esque dance moves that he is known for. He soon launched into one of his biggest hits, "Can't Feel My Face," as he ran down the runway stage that cut through the crowd and culminated in a circle under a large, red moon. Swiftly removing his trench coat (perhaps because of the Miami heat, which he did mention later in the show), he threw it into the floor seats for fans to fight over as he ran back to the cityscape.

See more photos from the Weeknd's performance at Hard Rock Stadium here.
Photo by Michele Eve Sandberg
Suddenly, the city was on fire as he launched into "The Hills," an ode to a sexy affair and fucked-up life, as everything burned around him. As if that wasn't enough, the runway also exploded in pyrotechnics hot enough that it felt like it might singe those sitting closest to the stage as the song reached its climax. A similar theme of longing to be a good guy but resigning to be the bad slips its way into most of the Weeknd's songs, and a burning skyscraper background seemed a rather fitting visual for it.

As quickly as the flames came, they went, and Tesfaye was back to the middle with sexually explicit gestures and dance moves, launching into some crowd favorites: "Starboy," "Heartless," "Party Monster," and one of his most raunchy features on Ty Dolla $ign's "Or Nah." His falsetto rang out crystal clear as he sang his woes of money, bitches, and drugs, though he was still looking for reassurance at the end of the day. "Miami, do you motherfucking love me?" he asked the crowd.

In one instance, Tesfaye pulled the microphone down and basked in the sound of the stadium singing his lyrics back to him. With all spotlights on the runway pointed toward the sky, it almost looked as if they originated in heaven itself and were actually all pointing back to the "chosen one," the Weeknd.

See more photos from the Weeknd's performance at Hard Rock Stadium here.
Photo by Michele Eve Sandberg
"I want to be with Miami, forever, forever!" he crooned.

As the show came to a close with "Save Your Tears," the city backdrop again made an appearance, except this time it didn't seem quite as rundown and instead appeared to represent a brighter future. His show ended with his '80s-sounding hit "Blinding Lights" to a dancing and screaming stadium.

"Miami! Always the hottest, always the most fun! I'll be back soon, ya?" he quipped, taking a bow. His veiled dancers formed a recessional and walked back toward the city and into the dark, with Tesfaye taking up the final place in line. As he reached the rooftop where the show began, he turned in a cloud of smoke for one final goodbye before disappearing into the abyss.

- "Alone Again"
- "Gasoline"
- "Sacrifice (Swedish House Mafia Remix)"
- "How Do I Make You Love Me?"
- "Can't Feel My Face"
- "Take My Breath"
- "Hurricane" (Kanye West cover)
- "The Hills"
- "Often"
- "Crew Love" (Drake cover)
- "Starboy"
- "Heartless"
- "Low Life" (Future cover)
- "Or Nah" (Ty Dolla $ign cover)
- "Kiss Land"
- "Party Monster"
- "Faith"
- "After Hours"
- "Out of Time"
- "I Feel It Coming"
- "Die for You"
- "Is There Someone Else?"
- "I Was Never There"
- "Wicked Games"
- "Call Out My Name"
- "The Morning"
- "Save Your Tears"
- "Less Than Zero"
- "Blinding Lights"
KEEP MIAMI NEW TIMES FREE... Since we started Miami New Times, it has been defined as the free, independent voice of Miami, and we'd like to keep it that way. With local media under siege, it's more important than ever for us to rally support behind funding our local journalism. You can help by participating in our "I Support" program, allowing us to keep offering readers access to our incisive coverage of local news, food and culture with no paywalls.
Make a one-time donation today for as little as $1.