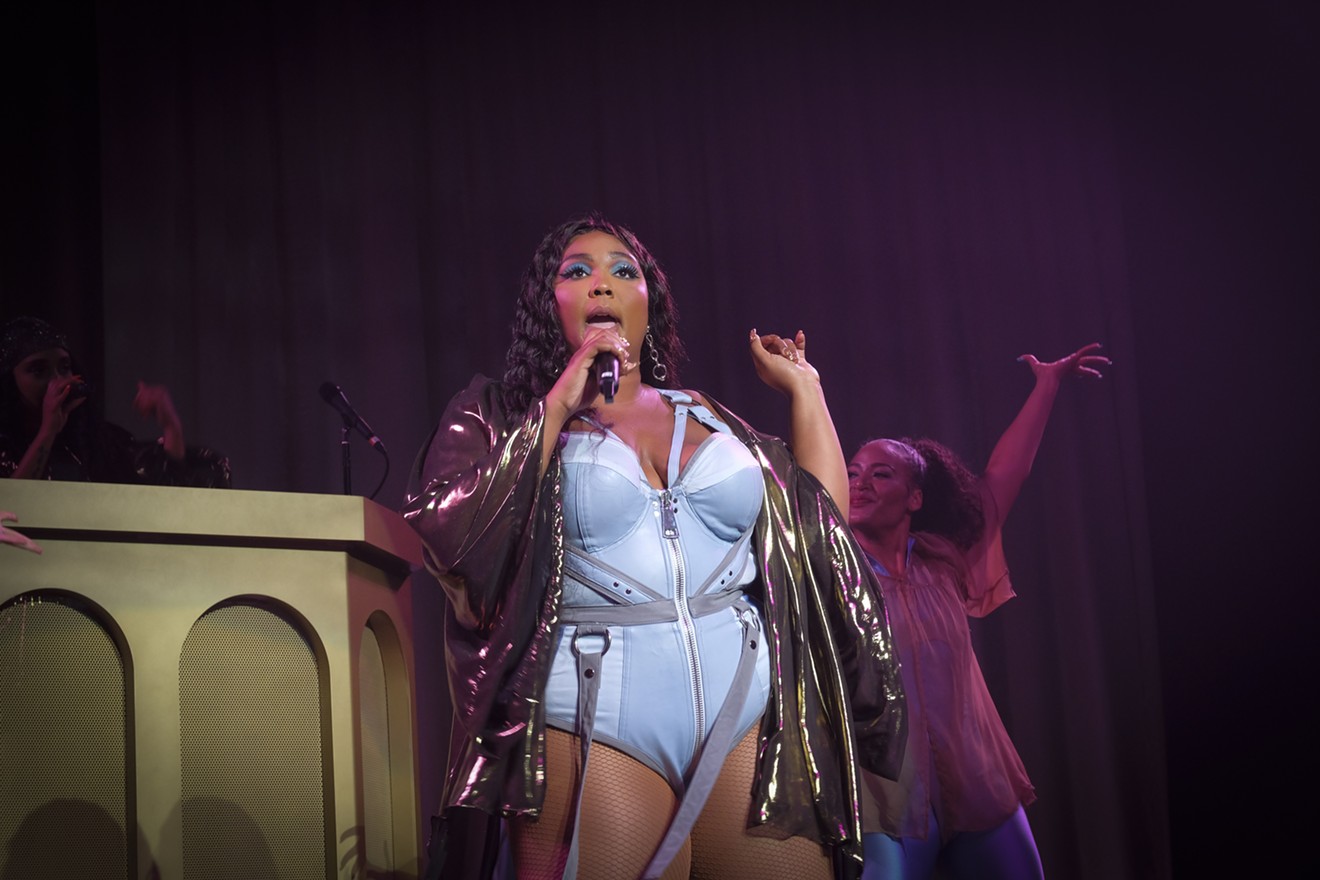 Lizzo had the sold-out audience at the Fillmore Miami Beach eating out of her hand. See more photos of Lizzo's performance here. Photo by FujifilmGirl
“Y’all know I’m trying to take y’all to church with a twerk; can I get an amen?”

Speaking to a sold-out crowd at the Fillmore Miami Beach Wednesday night, pop’s newest it-girl Lizzo knew she had a religious experience in store for her rapturous audience. With her 2017 single “Truth Hurts” now enjoying its second week atop the Billboard Hot 100 chart, the excitement for a showstopping performance was palpable in the room long before the self-described “bop star” took the stage.

The shuffling crowd at the Fillmore spanned all different ages, sizes, ethnicities, religions, genders, and sexualities — a phenomenon Lizzo hinted at during her set: “I often get asked, ‘What does a Lizzo fan look like?’ and it’s impossible for me to give just one answer, other than them being the baddest bitch in the room!” Her youngest fan in the crowd was arguably a baby holding a recorder while sitting in the arms of an excited mother, likely to play along with Lizzo later when she would inevitably demonstrate her skills as a flautist.

Dreamville signee and R&B ingenue Ari Lennox opened the show with highlights from her young discography such as “Whipped Cream” and “Backseat” before Lizzo emerged onstage in a silver vinyl jacket reminiscent of Missy Elliott’s iconic “trash bag” suit, with a periwinkle bodysuit underneath.

The Church of Lizzo opened its Wednesday evening service with electrifying renditions of “Heaven Help Me” and “Worship,” the latter of which received the twerk treatment via a mashup with Aretha Franklin’s timeless “Respect.” After rapping, singing, and dancing her way through Cuz I Love You standouts such as “Exactly How I Feel” and “Water Me,” Lizzo took a moment to catch her breath.

See more photos of Lizzo's performance here.
Photo by FujifilmGirl
“Can I have a real-ass conversation with y’all for three seconds?” she asked to thunderous applause. “Everybody at this point knows what I'm about — body positivity, self-love, self-care, etc. But even with all that self-love, I'm still attracting fuckboys!" Before jumping in to slow jam “Jerome,” she asked the crowd to illuminate the Fillmore auditorium, wave their phone lights from side to side, and join her in singing about one of the many men who’ve done her wrong.

Midway through her set after a soul-heavy first half, Lizzo got the seated audience members back on their feet with the Elliott collab “Tempo,” drawing on the crowd’s excitement while chanting, “Go Miami! Go Miami!” After wiping her forehead with a towel from her DJ (longtime friend and performer Sophia Eris), Lizzo turned her back to the audience and shook every inch of her derriere before shouting out all the “thick bitches” in the crowd.

Before launching into self-love anthem “Good as Hell,” Lizzo took another moment to sit and talk with the audience about finding strength in qualities others may perceive as weaknesses. “I talked to my therapist for the first time in a year today,” she said to uproarious cheers. “People think vulnerability and insecurity are the same thing, but they're just not. Being vulnerable is one of the strongest things a person can do,” she continued, adding that her growing fan base had taught her that lesson during her breakthrough year.

Lizzo unsurprisingly closed the show with an exhilarating performance of “Truth Hurts,” incorporating the wedding motif and flute trills from her performance of the smash hit at this year’s BET Awards. It was clearly the moment that the crowd had been waiting for, with Lizzo practically leaving the entire first verse up to the audience to yell themselves. Both she and her flute returned to the stage for the encore: an interactive rendition of “Juice,” her most successful ode to self-love that she says “changed [her] life” after its release at the beginning of this year. See more photos of Lizzo's performance here.
Photo by FujifilmGirl
In many ways, Lizzo represents the antithesis of the traditional pop star image — and that’s exactly the point. Her music celebrates love for what makes each of us different and places the spotlight on her listeners (she insists she doesn’t have “fans,” only “extended friends”) rather than on herself.

"Everybody deserves to experience all kinds of love — romantic love, sexual love, family love, friendship love —but most importantly, you deserve self-love!” she told the crowd. In tumultuous and uncertain times like the present, the self-love that Lizzo preaches through her music is exactly the kind of spiritual revival her "extended friends" probably need.

Encore:
- "Juice"
KEEP MIAMI NEW TIMES FREE... Since we started Miami New Times, it has been defined as the free, independent voice of Miami, and we'd like to keep it that way. With local media under siege, it's more important than ever for us to rally support behind funding our local journalism. You can help by participating in our "I Support" program, allowing us to keep offering readers access to our incisive coverage of local news, food and culture with no paywalls.
Make a one-time donation today for as little as $1.