Why Is Wynwood's Museum of Graffiti Selling Its Artwork? OG Slick's mural on the Museum of Graffiti's west wall. Photo by Douglas Markowitz
If you haven’t visited the new Museum of Graffiti in Wynwood, you might want to make some time for it. Tracing the history of the medium from the late '60s onward, the museum makes an excellent case for street art as a serious art form, and its displays are detailed, insightful, and entertaining. There’s just one problem, and it might undermine every other worthwhile thing the place is doing: It's selling art on the side.

During a recent visit, a New Times reporter asked an attendant whether the museum would be changing exhibitions. He said it would, but only in a special space in the back of the building. The current occupant is an exhibit of paintings — the traditional, canvas kind — by the Dutch artist Niels Shoe Meulman. They’re good works, combining deep, dramatic colors with bold, gestural sprays, dripped paint, and calligraphic brushstrokes. And they can be yours for a few thousand dollars each, according to the price tag next to each one.

Essentially, the Museum of Graffiti is charging $16 for admission to not only its permanent display but also this side gallery through which it's dealing art. Reached by phone, museum cofounder Alison Friedin says the gallery is meant to showcase graffiti artists who have been ignored by the art mainstream.

That seems well and good. But from another point of view, the fact that a museum is selling any art is cause for concern, and that has to do with the thin boundary between art and commerce. Paintings by Niels Shoe Meulman for sale at the Museum of Graffiti.
Photo by Douglas Markowitz
In the art world, works are exhibited by two separate but equally important groups: galleries, AKA dealers, which sell art on behalf of artists, and museums, which recognize certain artists as important and educate the public about them. The most significant distinction between the two is that, in a gallery, the art on the wall is for sale, and in a museum, it is not.

When you walk into a commercial art gallery, whether it be a Manhattan megadealer or a local co-op, all of the paintings and sculptures in the room are for sale. The dealer wants to convince the customer that the artists the gallery represents are important and worth collecting. (The customer usually isn’t a random person off the street who can’t in their wildest dreams afford anything in the gallery, but no matter.)

When you walk into a museum, on the other hand, it's not to buy art, but to look at it and learn about it. In the United States, most museums are 501(c)(3) organizations, meaning they have tax-exempt status as long as they don't try to make a profit. They rely on the public to remain open, whether through ticket sales, donations, or running gift shops or cafés. Many museums are supported by local and national governments, from the Smithsonian museums in Washington, D.C., to the Miami-Dade County government supporting Pérez Art Museum Miami. The public has an interest in what goes in the museum, so if an artwork has entered the museum, it had better be for a good reason. Maybe the museum owns the work, or perhaps it’s on loan from a private collection or another institution. Whatever the case, the fact that it’s on the wall means the curator considers it important and worth knowing. By displaying it, the curator is stating that the work says something insightful about society or that its craftsmanship makes it worthy of examination.

Because the art world does not always follow those guidelines, ruptures break this dynamic. Big dealers will often hold so-called nonselling exhibitions of favored artists at their own spaces, and when a museum exhibits a work by an artist, the dealer raises the price because the work is deemed more important and thus more valuable. Through gift shops, both sell merchandise related to the art on display. Sometimes agreements are made in which a collector who buys a certain piece must eventually donate it to a museum. And all — even public museums — occasionally buy and sell work at auction. When they do, it's usually to get cash to buy more art, and there are almost always discussions over if and why a historic, valuable piece should be sacrificed to purchase works from lesser-known artists. 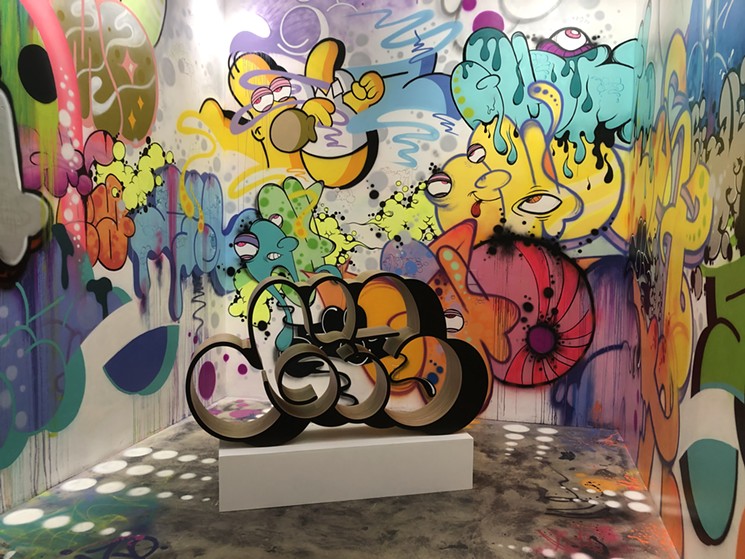 An installation by artists Ghost and Giz at the Museum of Graffiti.
Photo by Douglas Markowitz
The fact that the Museum of Graffiti is also functioning as a gallery — and seemingly wants to enjoy both the respect of a museum and the profits that come with dealing art — is troubling. Friedin explains that although the museum is running a for-profit gallery (she did not disclose the amount the gallery makes off each sale; most commercial fine art galleries take as much as 50 percent), the cofounders consider it completely separate from the permanent exhibition despite being housed in the same building. They've also foregone 501(c)(3) tax-exempt status for now but would like to be able to claim it in the future. "Our goal is to really be a cornerstone in the community," she says.

Still, why do they need to make any money by selling art at all? An exhibition in and of itself can help an artist gain attention in the wider art world; why do they feel the need to profit from artists as well? It doesn’t invalidate their mission, but it does cheapen it. And that’s a shame, because documenting and championing graffiti as a serious art form is a wonderful mission.

As the museum tells it, graffiti was the world’s first youth-led art movement. Its inventors — the disenfranchised adolescents of a dilapidated '60s and '70s New York — used public space as a canvas. They painted walls and subway cars, not canvases hung in a gallery to be bought and sold by the wealthy. They expressed themselves in this work; their medium was the message. A caption in the museum, a quote from artist SAL 161, expresses the sentiment well: “When you do it on a canvas you don’t run the risk of someone writing over it; but I can’t handle seeing my identity hung up on a wall! It’s useless, it’s better on a train’s metal plate.”

Ironic that such a quote is now up on a wall in a museum. Did SAL 161 ever envision his work might sell if he put it on canvas? We'd like to think he didn’t care, that he simply wanted people to see it, that he might even be opposed to it being anything but free to behold. That attitude seems more in touch with the spirit on which graffiti was founded. But we don't know — we weren't there. It’s the museum’s job to teach us.
KEEP MIAMI NEW TIMES FREE... Since we started Miami New Times, it has been defined as the free, independent voice of Miami, and we'd like to keep it that way. With local media under siege, it's more important than ever for us to rally support behind funding our local journalism. You can help by participating in our "I Support" program, allowing us to keep offering readers access to our incisive coverage of local news, food and culture with no paywalls.
Make a one-time donation today for as little as $1.