LA Graffiti Artist Saber Goes From the Street to the Gallery

Saber rose to international acclaim at the age of 21 when he created a graffiti piece measuring 55 feet tall and 250 feet across on the banks of the Los Angeles River. Photo by Zane Mayer
His artwork was visible to satellites orbiting the earth in 1997 when he created the world's biggest graffiti piece, and now audiences in Miami can feast their eyes on LA street artist Saber's newest works.

Heralded by many as a master of graffiti art whose career has taken him from the streets of Los Angeles to the studio, Saber is exhibiting his new and recent works at the Museum of Graffiti in Wynwood. "Saber: Escape From Los Angeles," on view through mid-November, features paintings and drawings that reflect on the inherent danger in Los Angeles' urban landscape and the inner journey the artist experiences as he lives with repetitive grand mal seizures. One large-scale mural is created by using modified fire extinguishers filled with paint.

"I love the texture. I love paint raining. I love dirty drips. I love being covered in paint. I love amplifying the strokes of painting onto an even bigger scale. This is as raw as it gets," Saber says of the mural. "I fill fire extinguishers with paint, go to the gas station to pump them with air, and don't get caught."

Saber received international acclaim at the age of 21 when he created a graffiti piece measuring 55 feet tall and 250 feet across — nearly the size of a football field — on the banks of the Los Angeles River. He applied 97 gallons of paint over 35 nonconsecutive days throughout the course of a year, and the piece was visible from outer space for a dozen years. Though the U.S. Army Corps of Engineers covered it up in 2009 as part of a graffiti-removal project funded by federal stimulus money, its legacy and legend remain.


"It's the world's largest piece of wild-style graffiti," Saber says. "I'm most proud of the fact that it has given inspiration to younger kids who are not astronauts or famous actors. There is something tangible for them to create that leaves a mark."

Art featured prominently in Saber's own childhood growing up in the LA suburb of Glendale, as his parents ran an art studio. In fact, his family tree has sprouted several generations of artists, including his grandfather Euclid Shook, who gained prominence for his drawings of pin-up girls for men's magazines in the 1940s and '50s. At 12, Saber developed an interest in graffiti thanks to a combination of his involvement in Southern California skateboard culture and his parents' encouragement and exposure to various creative processes.

"I was always surrounded by creativity and I started to draw very early. I was very eager to learn. There was a power in graffiti tags and skateboard graphics that started to come together for me. Once I got my hands on the book Subway Art, it all went quickly from there," Saber recalls. "Graffiti gave me the platform to explore the unorthodox tools that I use. Graffiti is at the helm of pushing boundaries." 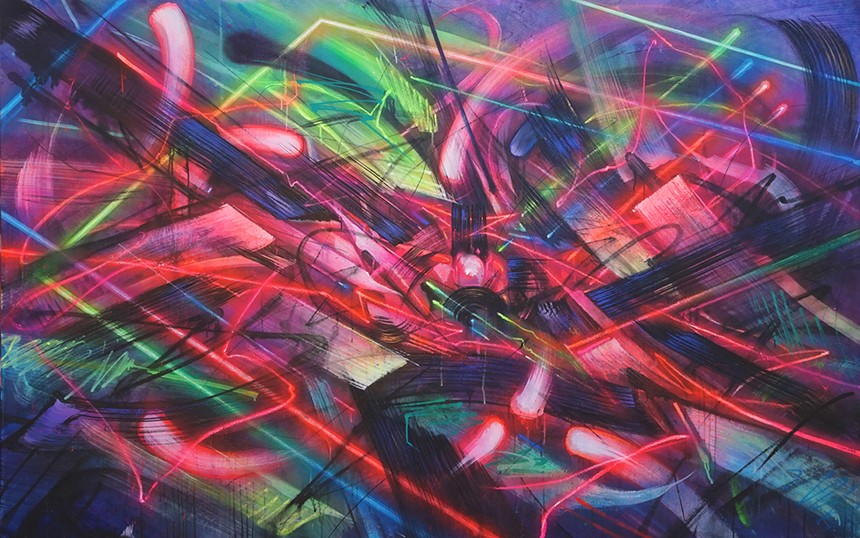 Saber's Emergence is one of several paintings and drawings on view at the Museum of Graffiti.
Photo courtesy of Saber/Museum of Graffiti
A series of works featured in "Escape From Los Angeles," entitled Bladerun, imagine a not-so-distant future for the City of Angels that's equal parts beauty and dystopia: buzzards circling roadkill, police helicopters crowding the cloudless skies that turn rose-gold when the sun dips below the horizon. Saber says a lifetime spent in LA shaped the trajectory of his career and influenced the content of his work.

"LA, just like every other major metropolitan city, has everything. You can see the danger, the tweakers, the criminals, and the grime," Saber explains." There is an illusion that success is accessible. In reality, the rich and famous are barricaded away from everything else, except in traffic. For those living on the fringe, you can choose your own adventure. This personally impacted me because I had to overcome urban obstacles that were violent and dangerous to get where I am now in the art world."

Other pieces in the exhibition use bright splashes of color and light to illustrate his experience living with epilepsy and his research on brain chemistry.

"It's what I'm dealing with every day and how to manage my life with this condition. The act of finishing [these pieces] is defeating epilepsy. It's not even the pieces themselves — it's the process of getting up and creating. That's how you win over this condition," he says. "The pieces are a glimpse into my mind. It's about energy, complexity, what's organic, technology, and the future all combined. Technology has saved my life."

Museum of Graffiti cofounder Alan Ket says Saber's career and work pair artistry with activism, leaving an impact in his native Los Angeles and beyond.

"He, along with his crew, AWR/MSK, helped to turn LA into a mural destination, with dozens painted in the 2000s. Additionally, he has shown up as an activist using his voice and art to fight for equal health care for all. He continues to push the boundaries stylistically with bold, new, abstract works," Ket says. "Saber is now one of the first artists in the world to capitalize off illegal graffiti by 'tokenizing' a piece he did on the side of a highway in Los Angeles. Fans and collectors rushed to grab this NFT and own a piece of illegal graffiti."


Saber hopes visitors to "Escape From Los Angeles" question their preconceived ideas of what defines art, vandalism, and the immense gray area that exists between them.

"When they see graffiti on the street, I want them to feel that there's a deeper story behind there," Saber says. "The work itself shows the validity of the process. Think about the kid behind the letters."

The Museum of Graffiti is the first institution to primarily exhibit the work of graffiti artists. Cofounder Allison Freidin says visitors to "Escape From Los Angeles" and the museum's other programming will expose themselves to a perspective on public art that's often left out of the conversation.

"Visitors come in every day believing that graffiti is primarily gang-related or associated with other extreme lawless behavior due to the stigma placed on the art form by government campaigns that were accepted and promoted by the media," Freidin says. "There was never an artist, let alone an institution, present in the past decades to tell the other half of the story. We work to expose the talent among the leaders of this art form and call attention to pioneers who perpetuated a way of making our public places far more interesting than the mundane, subtle shades of beige or gray you would otherwise see when looking around our streets."

"Saber: Escape from Los Angeles." On view through mid-November, at the Museum of Graffiti, 299 NW 25th St., Miami; 786-580-4678; museumofgraffiti.com. Tickets cost $16; free for children under 13.
KEEP MIAMI NEW TIMES FREE... Since we started Miami New Times, it has been defined as the free, independent voice of Miami, and we'd like to keep it that way. With local media under siege, it's more important than ever for us to rally support behind funding our local journalism. You can help by participating in our "I Support" program, allowing us to keep offering readers access to our incisive coverage of local news, food and culture with no paywalls.
Make a one-time donation today for as little as $1.