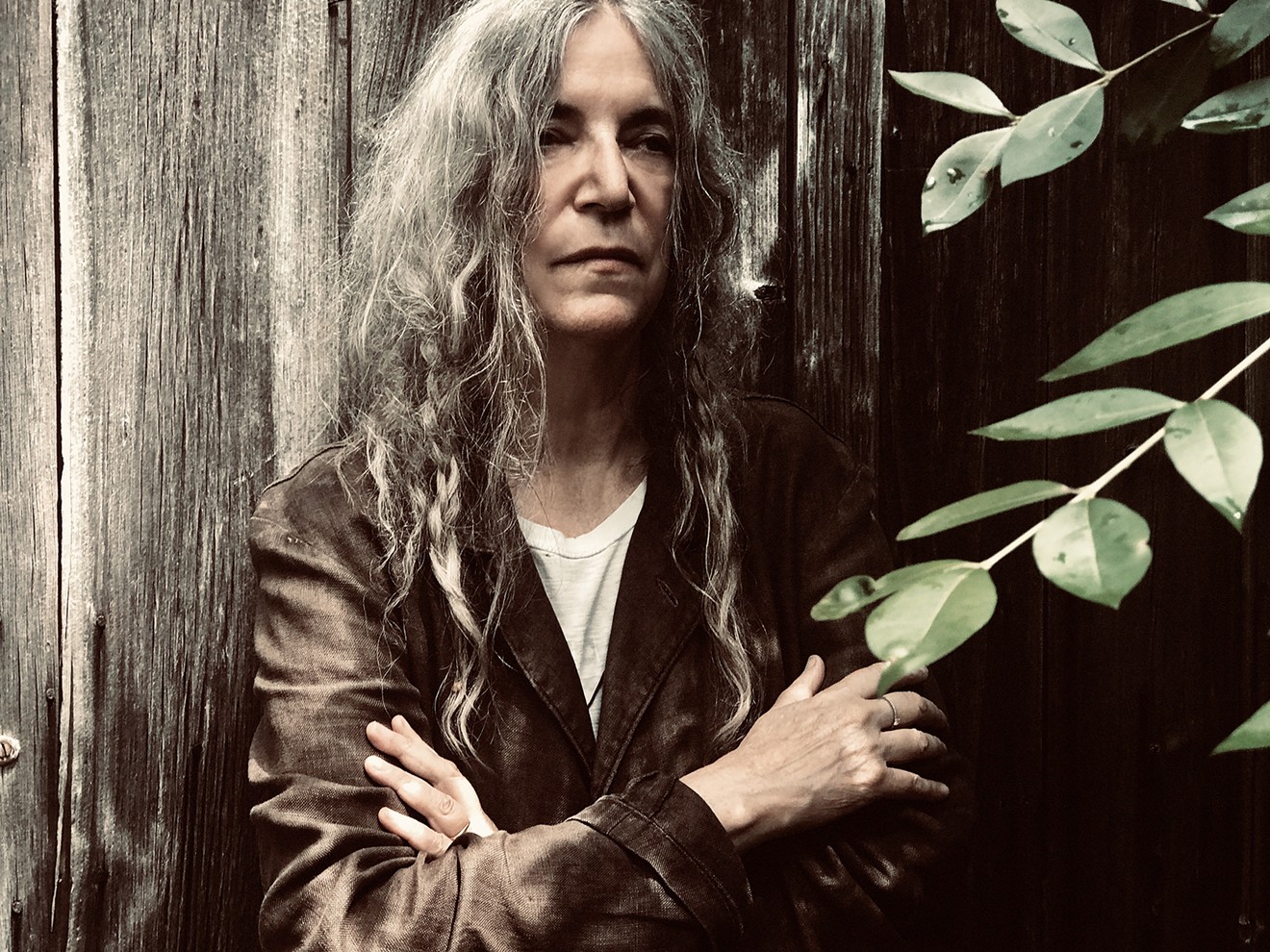 Patti Smith Photo by Steven Sebring
Have you ever turned down a foreign street and sworn you've been there before? Ever met a stranger that seems oh so familiar, heard a new song that rings with recognition in your bones, or tasted a dish that reminds you of home?

The more of this life we experience, the more the corners of it bleed together in sunset hues. Life is but a dream, after all; a weird dream, sometimes a nightmare. You can't stop the shock of it, but you can look for the beauty and the hope.

That's the poetic reminder from Patti Smiths' latest memoir, Year of the Monkey, which brings her to the Arsht Center on Tuesday, December 17. The book chronicles a tumultuous time in the Rock 'n' Roll Hall of Fame inductee's life. It begins with the first day of 2016, and works through a lunar calendar of loss, death, aging, climate change, and political upheaval, wrapping all of these mortal worries in a pensive and whimsical haze where the line between dream and waking life fades from visibility.

“Nothing is ever solved,” Smith writes. “Solving is an illusion. There are moments of spontaneous brightness, when the mind appears emancipated, but that is mere epiphany.”

Although the Arsht Center event will no doubt offer fans a chance to learn more about her process and maybe even ask their most burning questions, if feeling a little closer to Smith is the primary goal, one must only crack open Year of the Monkey. It reads like a diary because it effectively is: Culled from her daily journal entries, it's full of references to movies, books, and many, many songs. Her coffee budget must be wild, as she's always sitting down to a cup or two and a humble meal.

“It's a book that invites the reader to hang out, take a walk, be with me for a while,” Smith tells Miami New Times by phone. “Whether it's thinking about issues of loss or migration, having a sardine sandwich or contemplating the Ghent Altarpiece, we can sort of all be together.”

Smith's writing has always been personal. In 2010, she won the National Book Award for Just Kids, which detailed her life and relationship with celebrated photographer Robert Mapplethorpe. Her 2015 follow-up M Train tackles the profound losses of her husband Fred and brother Todd. Still, she calls Year of the Monkey “particularly poignant” in part because she never intended to write it at all.

“I was traveling,” she says. “One of my dear friends had a brain aneurysm, and I was supposed to be traveling with him. I was spending a lot of time with Sam Shepard toward the end of his life, and then it was the election year … Writing every day was a stabilizing aspect in my life. I'd wake up in the morning, have my coffee and write for a couple of hours.”

Once Smith decided she would publish and share the work, she dove deep into her multitude of journals to unfurl a fanciful narrative that leans more Lewis Carol than it does journalistic truth.

“Sometimes I have three or four journals,” she says, “And I'll start a story in journal A and it'll wind up that journal C has the rest of the story. I have to go through all my journals to see where the second part of something is. I'm not very organized. I'm organized in that I write every day and that I have all my journals, but in terms of where things are, one needs to be a bit of a detective to find the continuing narrative."

Smith writes by hand and transcribes the entries into a computer. She even spends 10-minutes a day writing with her non-dominant left hand, “just in case.” Her passion for the form extends to assisting others as well; Year of the Monkey details how a fellow writer friend of Smith's lost his ability to type in his old age, and relied on her to help assemble his final works.

Year of the Monkey is a beautiful meditation on time and meaning, a bittersweet adventure that doesn't try to solve the questions of creeping mortality, the rise of populism, or ever-encroaching sea levels. It simply takes the moment to look around, shake its head, wonder about it all, and remember to continue being.

“I'm happy with it,” she says. “We're living in the time — where in terms of the things that we're facing — the biggest one, I think, of course is climate change. We are going to have to make a global decision to unite and work together or suffer the terrible consequences. So some of these thoughts are within this book and continue on into the next.”

She tells New Times she's already deep into her next offering, a sort of parallel to Just Kids that focuses more on her own evolution as an artist and performer, as well as constantly journaling, writing poems and daring to dream in the day. Until then, longtime fans have Year of the Monkey and her visit to Miami to look forward to.

An Evening with Patti Smith. Tuesday, December 17, Adrienne Arsht Center, 1300 Biscayne Blvd., Miami; 305-949-6722; arshtcenter.org. Tickets cost $37.
KEEP MIAMI NEW TIMES FREE... Since we started Miami New Times, it has been defined as the free, independent voice of Miami, and we'd like to keep it that way. With local media under siege, it's more important than ever for us to rally support behind funding our local journalism. You can help by participating in our "I Support" program, allowing us to keep offering readers access to our incisive coverage of local news, food and culture with no paywalls.
Make a one-time donation today for as little as $1.