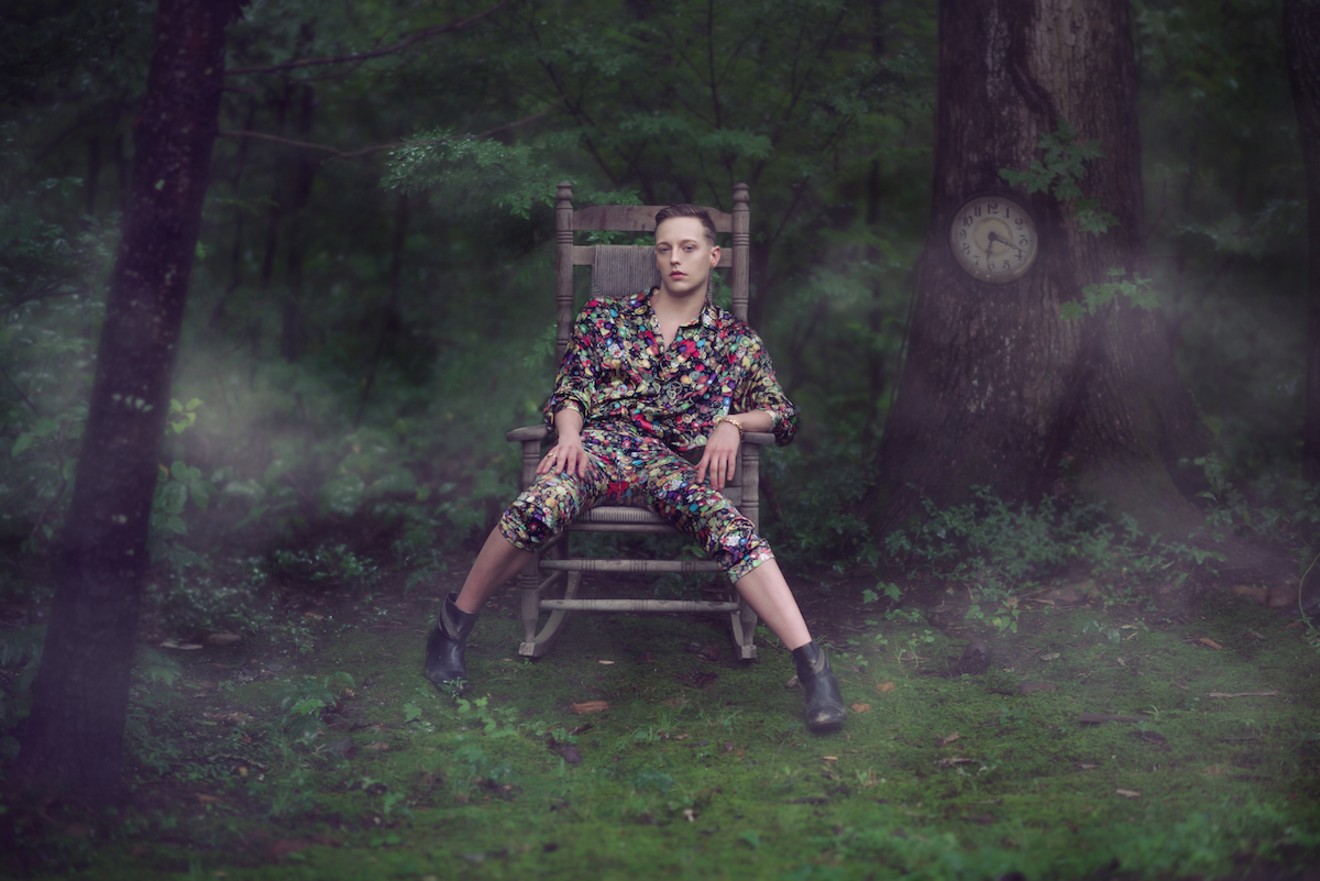 Jay Jackson Courtesy of YoungArts
Los Angeles-based dancer Jay Jackson says that when she was a child, her parents placed her in soccer. It was quickly clear sports weren’t the right fit for the future RuPaul's Drag Race Season 6 contestant. She ultimately found her niche in a dance class where the girls accepted her femininity and where she discovered herself as she watched her movements in the mirror.

Her dance mentor was her teacher at Booker T. Washington High School for the Performing and Visual Arts in Dallas, Linda James. “She knew I had the choreography bug in my system,” Jackson says. “I began not only helping her choreograph but taking over the choreography completely — still under her direction.”

Teacher and student came in early before class and stayed late to work on school musicals before teaching the students their moves. “I got to understand choreography through her lens, which was such a beautiful thing, that somebody was really walking me through it," Jackson recalls. "Usually, you just take a composition class. Those are great, but to really have a one-on-one experience with a teacher, and being in the studio creating choreography to musicals I grew up listening to, it was a dream come true. I realized this was my actual calling.”

Jackson rose to international fame on RuPaul's show as a controversial character who had little experience as a drag queen and went on to tour the world with the drag family House of Edwards in 2015. Jackson has worked with Miley Cyrus and Brooke Candy and recently appeared on Season 15 of So You Think You Can Dance. She leads the roving high-heels dance masterclass and confidence workshop #LaganjasDanceSchool. Jackson was also a U.S. Presidential Scholar and a 2007 YoungArts winner in dance who has returned to work with the organization on several projects this fall.

But before all of that, she began touring professionally at the young age of 14. She credits her exposure to the many talented dancers on the road with helping her develop her own skills. In 2007, at 18, she won the YoungArts residency, which she remembers as intimidating. "From day one, the first 30 minutes you’re there, they let you know that even though it’s a competition, you’re really competing with yourself and not each other."

Jackson arrived at YoungArts with a dance piece titled Not Today. Her mentor Reggie Wilson pushed her hard and challenged her work. Jackson at first believed Wilson didn’t like the work, but because he was so caring and kind as a mentor, she says, he helped make it “the most incredible piece it could have ever been.” It was performed at the Kennedy Center after Jackson won the honor of Presidential Scholar.

Jackson's concentration on choreography and dance continued at the California Institute of the Arts, where she discovered her drag character, Laganja Estranja. After earning a bachelor of fine arts, she says, “I tried to be a male dancer in Los Angeles. But as a skinny, neon-red-haired, flamboyant boy, it was very difficult.” Tired of being told she was too feminine to fit the parts, she thought, Since I’m so feminine, I might as well put on a dress and see where that goes.

She entered an amateur contest at Mickey's in West Hollywood, which would land her a regular Monday-night showgirl gig if she won. Jackson called everyone she knew and packed the house. “After winning, I was thrust into a career I didn’t know anything about. I winged it,” she says of her weekly prepared numbers. She included other dancers in costumes and crafted productions that required a great deal of work. “I wanted people to recognize that I had a lot of talent as a dancer and I wasn't just a flamboyant boy putting on makeup, going out there to make some dollars,” she recalls.

After a year of working for $50 a night, she sent a 12-minute audition tape to RuPaul’s Drag Race and was selected to star on the show. “It changed everything for me,” she says, and not just financially. As a result of that casting, Laganja Estranja became a famous name who has visited countries around the world. 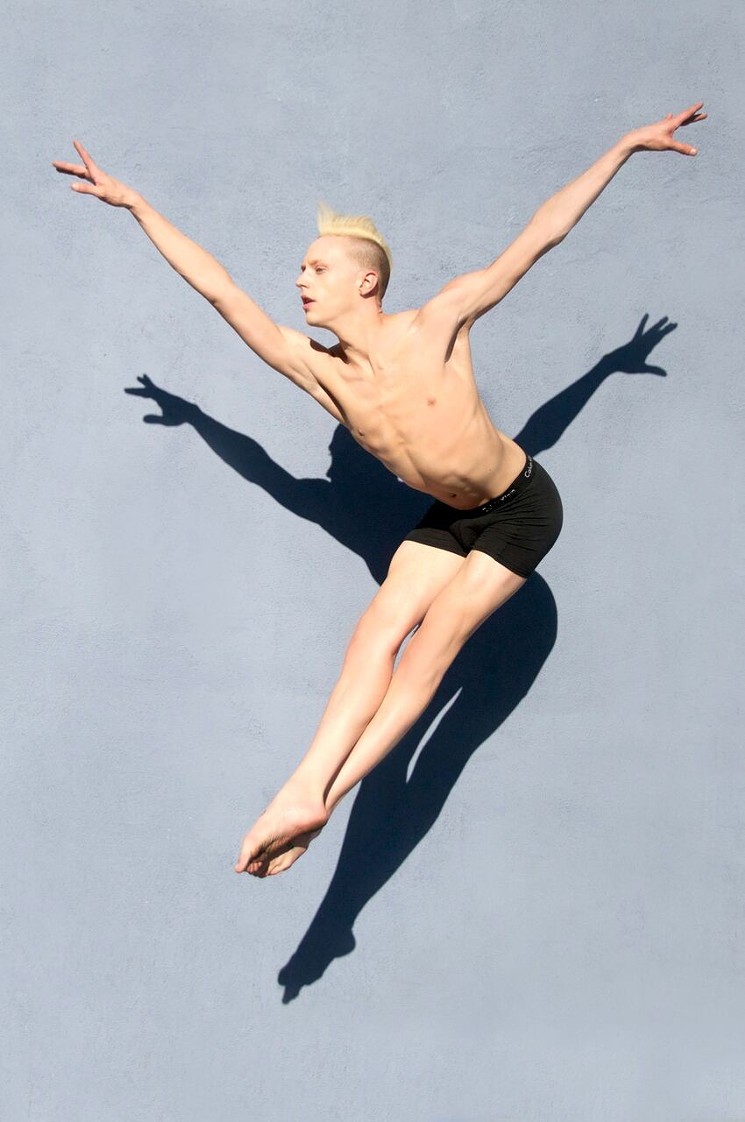 Jay Jackson takes flight.
Courtesy of the artist
Jackson explains that drag queens, much like traditional beauty queen contestants, often advocate on behalf of an issue or cause. Laganja, as her name indicates, took on legalizing marijuana. She learned the benefits of medical ganja after using it to help with a severe back injury. "People sometimes like to joke that I’m the Snoop Dogg of drag,” the cannabis activist says. But, she clarifies, “everything is based in education: the medical properties and how it’s helping epilepsy and cancer and how it helps me regulate my sleep and eating patterns, really teaching people about proper dosages, CBD and THC, [and] how one can medicate and not get intoxicated.”

Through the #LaganjasDanceSchool she launched in 2016 with best friend and manager Kristen Lovell, Jackson takes what she learned from her mentors and passes on knowledge and self-assurance. The high-heels technique class is all about gaining confidence. “I want people to walk away not as a stellar dancer but as someone feeling more confident about their body, about themselves, and, hopefully, about how they’re going to leave the classroom and move into their life.”

A workshop she led a couple of years ago in the English city of Nottingham was an exploration in gender that changed her life. “I went in to change other people’s lives, and in the end, it ended up changing my own.” It was there she began identifying as nonbinary — a gender identity that's not exclusively masculine or feminine.

The multidisciplinary dance-theater experience she began working on at that workshop has evolved into the piece that will kick off YoungArts' 2018-19 season Friday, September 28. The untitled work explores the "gradient on which gender exists." YoungArts alumni Delali Ayivor, D'Angelo Lacy (AKA Black Gatsby), and Blake Pfeil will also contribute to the experience.

The show, Jackson explains, is immersive: The audience is involved in the performance as artists dance around them. “It will be like a 4D experience at the movie theater,” Jackson says.

This, she believes, is the future of art. People don’t want to be just spectators — “they want to be a part of it," Jackson says. "They want to have some experience they can take away and not just some Instagram photo... It has to last in your memory; it can’t just last on social media. Nowadays we’re in such a digital age that people are longing for this connection. I believe that exploring gender through immersive art [will] open the conversation on a broader scale.”

Jay Jackson: Immersive Dance Theater. 7 to 10 p.m. Friday, September 28, at YoungArts, 2100 Biscayne Blvd., Miami; 800-970-ARTS; youngarts.org. Admission is free with RSVP via eventbrite.com.
KEEP MIAMI NEW TIMES FREE... Since we started Miami New Times, it has been defined as the free, independent voice of Miami, and we'd like to keep it that way. With local media under siege, it's more important than ever for us to rally support behind funding our local journalism. You can help by participating in our "I Support" program, allowing us to keep offering readers access to our incisive coverage of local news, food and culture with no paywalls.
Make a one-time donation today for as little as $1.