The entrance to the Art Wynwood fair at One Herald Plaza. Photo by Michelle VanTine
Think of it as the closing of Miami's winter art fair season.

"There is just too much then, too much competition. Collectors and visitors like this show in February because it's another option for the big collectors who stay away [from Miami Art Week] because it is too overwhelming," says Navarro, who has also been the director of Context Art Miami since 2014.

"At this fair, you can have an emerging artist that's 23 years old and you have the postwar work — the best of both. I love to see that dialogue between the two markets in one place," Navarro says. "It's also a boutique fair with only 50 galleries. You have the best of the two: the emerging contemporary galleries and the established ones that are coming with blue-chip work."

Art Wynwood debuted in 2012 as an international contemporary art fair in the heart of Midtown Miami and, in many instances, introduced worldwide visitors to the Wynwood Arts District. Now that its permanent home is no longer in Wynwood, is a name change due?

Navarro emphatically says no. "The name was more about an idea when everything started, and it has been solid since then. Globally, everyone knows it is in Miami."

The fair highlights Miami galleries, although national and international galleries exhibit as well.

"To see Miami the way it was in 2012 to Miami now in 2020, it is two different worlds. That is why every year we work hard to present the best that we have in this market, the galleries that we have that are our champions in the city,” he says. “Every year, we have new galleries from Miami that are working with us, and that is very important to the community."

While Navarro says everything is worth seeing, when pressed for his top five, he does offer a must-see list for this year's Art Wynwood.
click to enlarge "You have these rare Warhols coming to town to be seen for the first time, five beautiful drawings from The Andy Warhol Foundation. This is the first time anywhere they are available in the market. This is great for Miami." 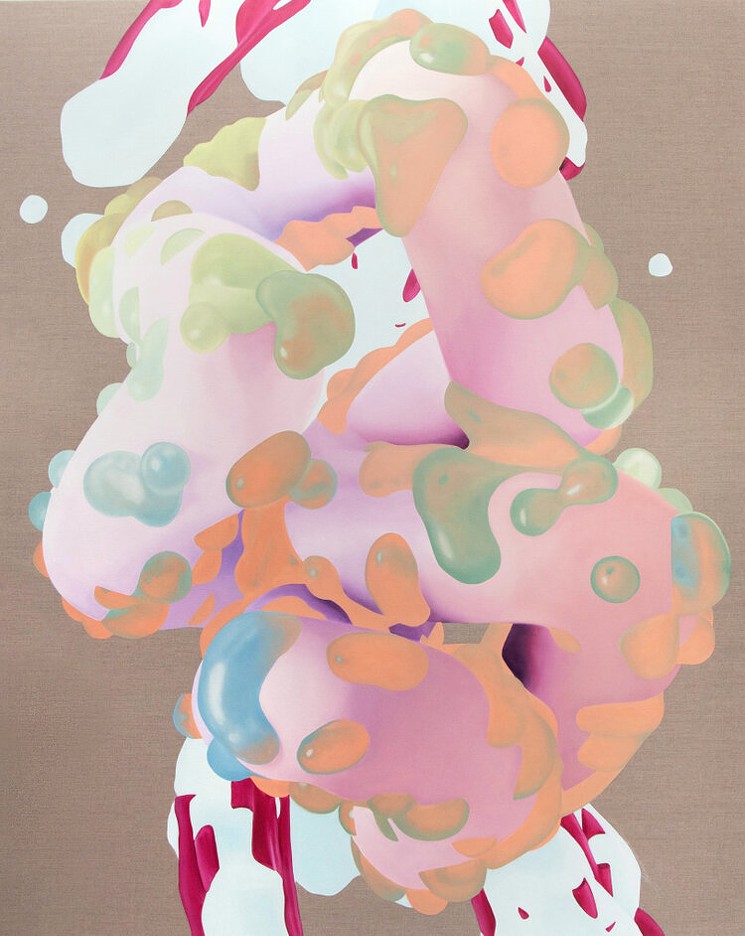 "The quality of her paintings is just stunning. When I see these canvases by themselves, no color and then the oil on top creating shapes, it's a new language."

The Miami-based sculptor creates visual semblances from museum board and xylene-based acrylic paint.

"His pieces are lively and very interactive. This is the first time, too, this gallery is in the fair."

"This is a work you'd find in Sotheby's or Christie's, and it's right here in Miami, so this is an opportunity for people to see this kind of quality we have at local galleries."

One of the pioneers of Minimalist painting, Ryman excludes all hues except white. In 2015, Christie's sold a Robert Ryman work for a staggering $20.6 million.

The Burgess gallery will display Marc Jansen's continuation of his 2011 Faceless series, which features striking, large-scale portraits of foreboding, faceless men in suits. Jansen is a former U.S. Army soldier turned combatant for the avant-garde.

"When the show is over, we want to make sure that the community keeps visiting the galleries and supports the artists," Navarro says. “That's important to us.”

Art Wynwood. Thursday, February 13m for VIP preview and open to the public beginning Friday, February 14, through Monday, February 17, at 1 Herald Plaza, Miami; 305-517-7977; artwynwood.com. Tickets cost $20 to $200 via artwynwood.com.
KEEP MIAMI NEW TIMES FREE... Since we started Miami New Times, it has been defined as the free, independent voice of Miami, and we'd like to keep it that way. With local media under siege, it's more important than ever for us to rally support behind funding our local journalism. You can help by participating in our "I Support" program, allowing us to keep offering readers access to our incisive coverage of local news, food and culture with no paywalls.
Make a one-time donation today for as little as $1.
ArtburstMiami.com is a nonprofit source of theater, dance, visual arts, music, and performing arts news.