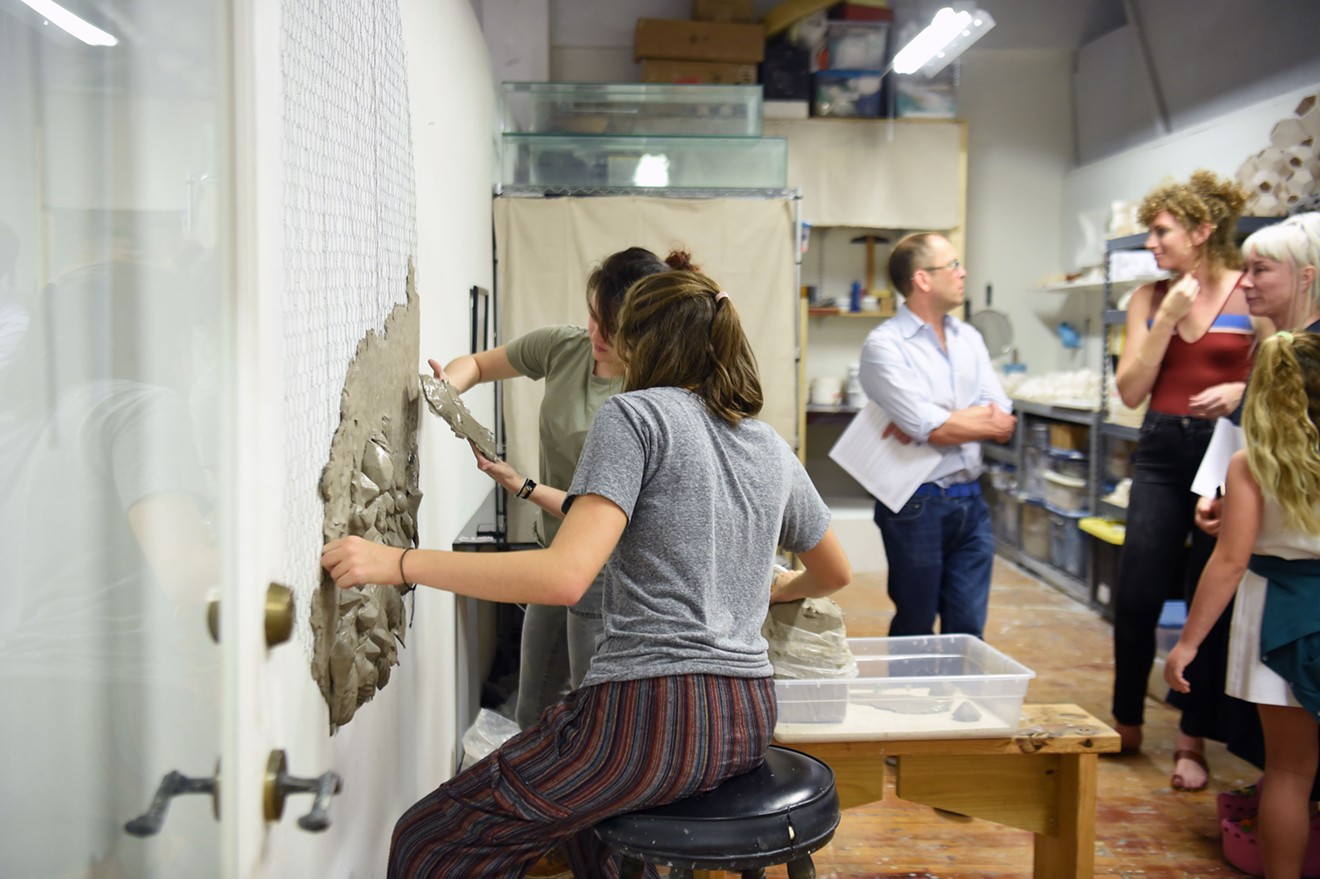 Lauren Shapiro is one of five artists whose Bakehouse studio will be open to the public after the Art + Activism panel. World Red Eye
South Floridians are breathing a collective sigh of relief after being spared the wrath of Hurricane Dorian. If meteorologists' predictions are correct, it's only a matter of time before the region finds itself in the path of another major hurricane.

Warmer oceans are only one of the side effects of rapid climate change, yet they’re the cause of a number of climate-related crises that Miami has already begun to face. Along with allowing storms more opportunities to strengthen before making landfall, higher sea temperatures have led to unprecedented levels of coral bleaching and red tide algal blooms. All told, Miami is “ground zero for climate change,” says Linda Cheung, founder of the Miami-based, climate-change-focused nonprofit Before It’s Too Late.

Cheung is one of the three panelists who will lead a conversation about the intersection between art and climate-change activism at Bakehouse Art Complex Tuesday, September 17. The Art + Activism panel will be rounded out by prolific Miami artist and University of Miami professor Xavier Cortada and science diplomat and policy leader Frances Colón. The discussion will be moderated by Bakehouse director Cathy Leff.

Bakehouse program assistant Laura Novoa believes that the conversation about the relationship between art and activism is long overdue and that the event will inspire everyone who attends, including Bakehouse’s artists-in-residence. “We really believe that artists have the power to transform and change our world,” Novoa says, “and I think that speaks to what people in the cultural community have the power to do: to influence people beyond their most proximal or direct circles.”

No one knows this better than Cortada, who echoes that sentiment. “At the end of the day, I'm trying to use art to motivate you,” he says. Though he's the only “artist” in the traditional sense on the panel, he emphasizes that anyone can be an artist simply by tapping into their creativity. It's a premise he's prioritized in his own work, including more community-oriented initiatives such as his projects Plan(T) and Trash Talk. “I intend to make [nonartists] the protagonists and the problem solvers by allowing them to tap into tools that are already there: their creativity, their humanity, their ability to communicate,” he says. “There needs to be a way that we can channel our collective resolve in a way that has power — and I think art allows us to do that.”

Bakehouse’s inaugural Art + Activism, then, is especially important given the urgency of the climate-related crises Miami faces, and it will in part serve as a call to arms for all those who want to help. “With this specific conversation — especially within the context of an arts institution like the Bakehouse — I want to inspire and create an uprising of creatives who can help,” Cheung says, "not only to help others become more aware of the issues, but to imagine new possibilities.”

This falls in line with Cortada’s idea of the artist as “someone who helps reframe the way people see.” He adds, “My hope is that through this panel, we engage in a conversation with the community where we support and nurture one another as we try to build new artistic processes to problem-solve.”

At the end of the event, attendees will have a chance to proactively think about how they themselves, the Bakehouse, and institutions all over Miami can each combat climate change, and combine their findings into a manifesto of sorts on a large sheet of paper.

Following the panel, Bakehouse will open its doors to a handful of resident artists’ studios for one of its quarterly open studio nights. What makes this open studio night different, however, is the Bakehouse will spotlight five of its artists-in-residence, who, according to Novoa, “deal with the idea of climate change in very interesting ways.” Among these creatives are ceramicists and visual artists such as Morel Doucet, whose work explores climate change within the framework of displacement and gentrification, and Lauren Shapiro, whose years spent working in the Amazon rainforest inform her pieces that often highlight the fragility of our ecosystems.

Novoa, Cortada, and Cheung all believe in the power of art's ability to disarm the observer and speak to them in ways people often can't. Novoa believes the double-sided nature of the event — an educational panel combined with interactive consumption of artwork — will be more effective in changing the minds of Miamians who aren’t as environmentally conscious as they should be.

“I think people are more open to taking in these difficult things when they're confronted with beautiful artwork,” she says. “Who wouldn't be?”

Art + Activism: Linda Cheung, Frances Colón, and Xavier Cortada on Climate Change. 6 p.m. Tuesday, September 17, at Bakehouse Art Complex, 561 NW 32nd St., Miami; bacfl.org. Admission is free with RSVP via eventbrite.com.
KEEP MIAMI NEW TIMES FREE... Since we started Miami New Times, it has been defined as the free, independent voice of Miami, and we'd like to keep it that way. With local media under siege, it's more important than ever for us to rally support behind funding our local journalism. You can help by participating in our "I Support" program, allowing us to keep offering readers access to our incisive coverage of local news, food and culture with no paywalls.
Make a one-time donation today for as little as $1.