The Ten Best Parks in Miami 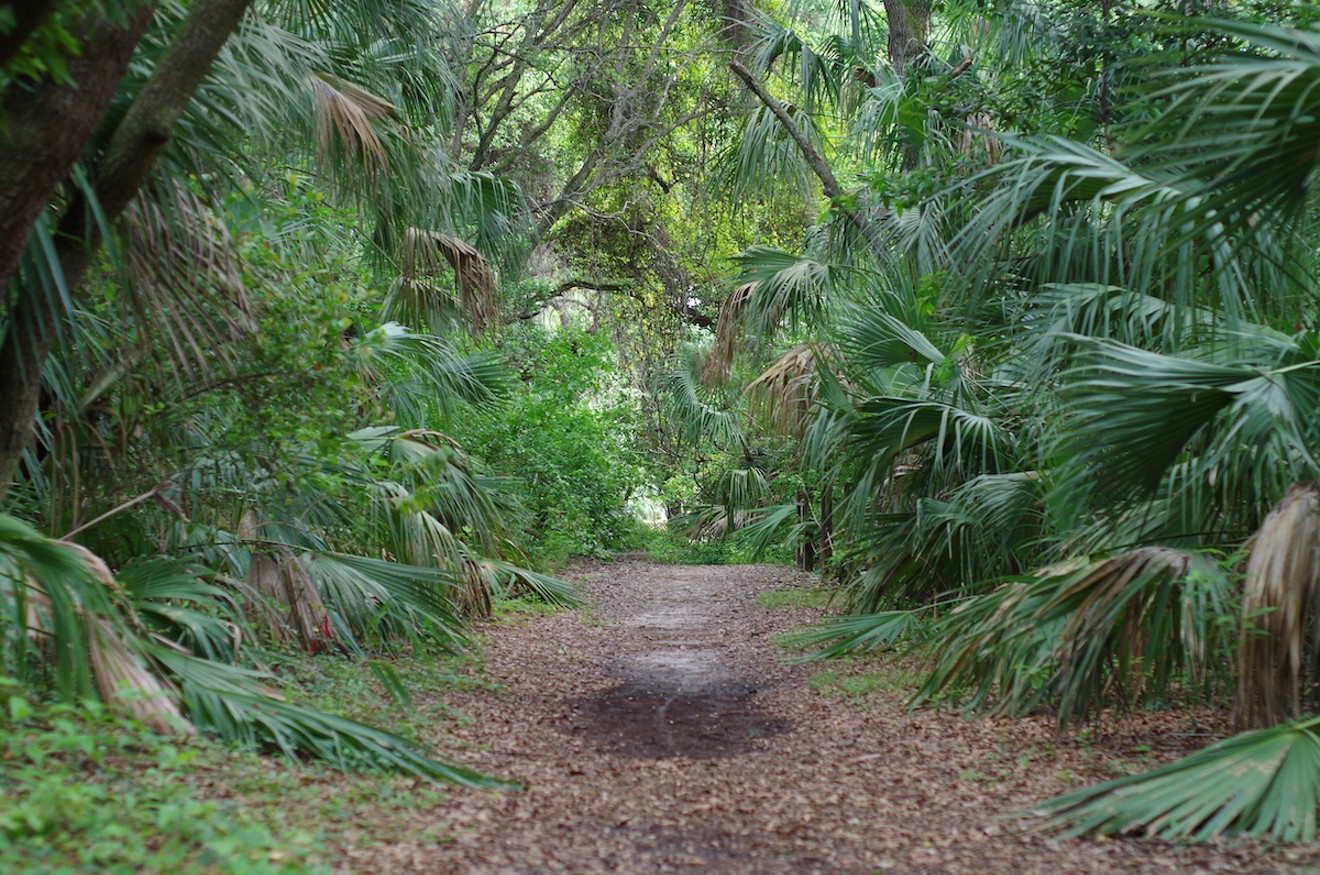 Escape the chaos in Miami's best parks. Photo by erluko/Flickr
Driving through Miami-Dade, runners and bikers can be seen traversing through manmade turf as kayaks and paddleboarders navigate the serene and sometimes choppy waters of the county’s coastline. Picnickers and family reunions share greenspace with solitary birdwatchers and hikers seeking to commune with native flora and fauna. The city's parks offer a respite from the chaos — and that shouldn’t be taken for granted.

Post-pandemic, the area's better-known and more heavily trod urban oases are brimming with activity, but they're not the only games in town. Below, in alphabetical order, are New Times' picks for Miami’s best parks — in all their shapes, sizes, and locales, from Palmetto Bay to Sweetwater and up to the edges of North Miami. 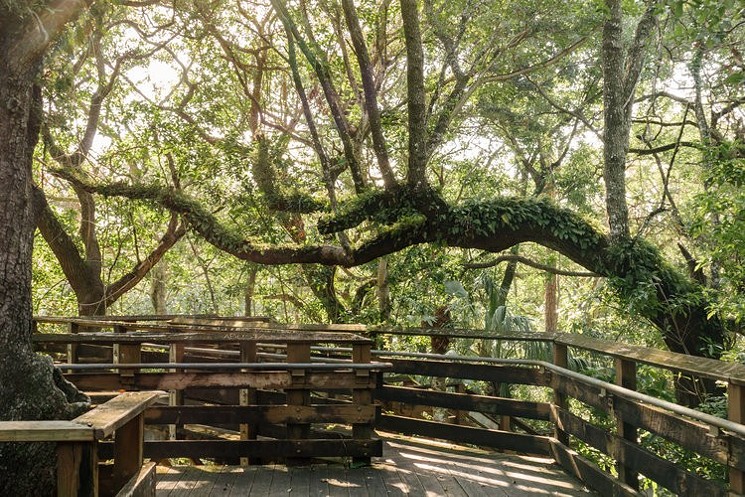 3401 SW 72nd Ave., Miami
305-666-5883
miamidade.gov/parks/ad-barnes.asp
Named in honor of the first director of Miami-Dade Parks & Recreation, this 65-acre park is located in the unincorporated area of Coral Terrace, just minutes from the Palmetto Expressway. Featuring a native tropical hardwood hammock and pine rockland hiking trail, the park’s aura aligns with the mission of its namesake, who sought to make recreation a critical component of community life and whose 40-year career brought us Miami’s park system as we know it today. As a space providing accessible pavilions for those with special needs and camp programming for children with disabilities, A.D. (Doug) Barnes Park allows everyone to benefit from its natural treasures. Open daily 7 a.m. to 7 p.m. 3485 Main Hwy., Coconut Grove
305-442-6866
floridastateparks.org/parks-and-trails/barnacle-historic-state-park
Only steps from CocoWalk and the bustling restaurants and shops of Coconut Grove’s entertainment district, Barnacle Historic State Park is the location of the oldest home still in its original location to be built in Miami-Dade. It also happens to be one of the more secluded, quieter parks to discover on one’s own, as the winding, canopied entryway leads to a grassy lawn with a head-on view of Biscayne Bay. Built by Ralph Middleton Munroe, a 20th-century settler of the area who fought off developers seeking to build artificial islands offshore and engineers who wished to pipe raw sewage into the bay, the passion project of a man who loved yachts and boats and, most of all, his Grove home, continues to be enjoyed by visitors today. Admission is $2 per person. Sunday through Wednesday 9 a.m. to 5 p.m. 17555 SW 79th Ave., Palmetto Bay
305-255-4767
miamidade.gov/parks/bill-sadowski.asp
When you think of going to a park, the idea of arriving at night might seem a little...off the beaten path. For stargazers and awestruck enjoyers of space, Bill Sadowski Park’s 33-acre terrain can be experienced quite nicely in the evening, thank you very much. With the largest telescope in the county available for visitors to use, the Southern Cross Astronomy Society has utilized the park to host weekly star parties since 1986 (interrupted only when the pandemic forced a suspension of operations). Named after William “Bill” Sadowski, an environmental lawmaker who worked to create accessible homes and landscapes for Floridians, the southernmost park on this list also features vast geological landscapes, from solution holes to limestone rock formations and even a drained Everglades slough. Open daily 9 a.m. to 5 p.m. 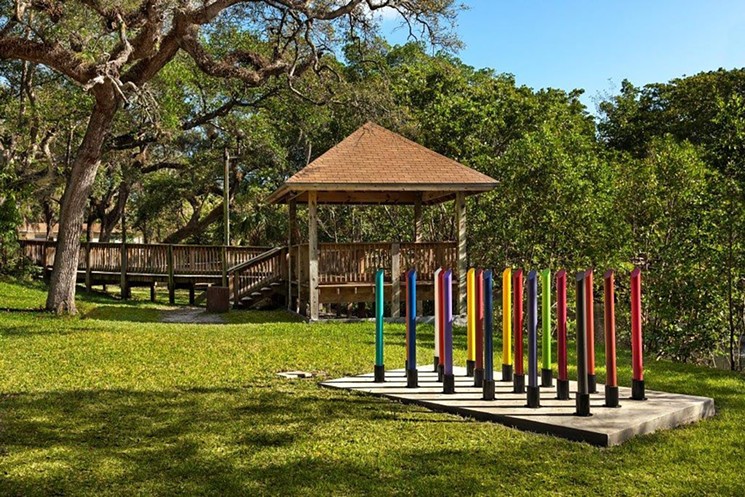 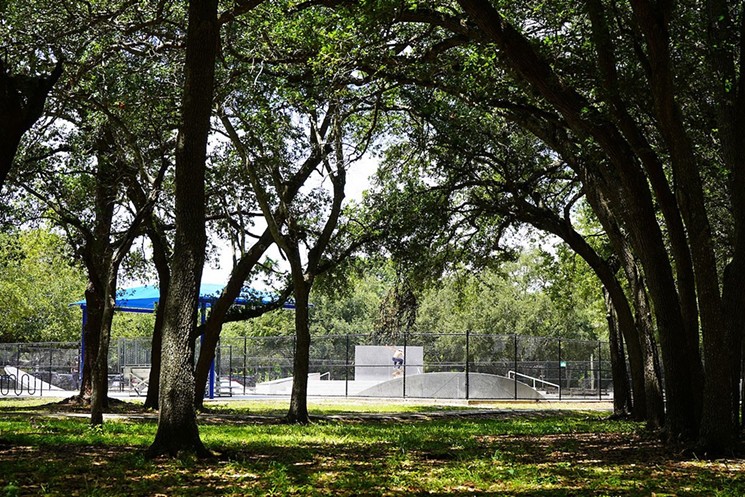 11395 SW 79th St., Miami
786-537-2016
miamidade.gov/parks/kendall-indian-hammocks.asp
This hardwood hammock in suburban Kendall, which provides a much-needed a breather from the harsh Miami sun, is located alongside a 14,000-square-foot plaza where adrenaline junkies and skating rookies abound. Inspired by Philadelphia’s Love Park and San Francisco’s Embarcadero, the Indian Hammocks Action Sports Plaza features ramps and rails where skaters of all levels and skillsets can thrive and grind, with a shaded bleacher section available for those who prefer to watch from a safe distance. Open daily 7 a.m. to 7 p.m. 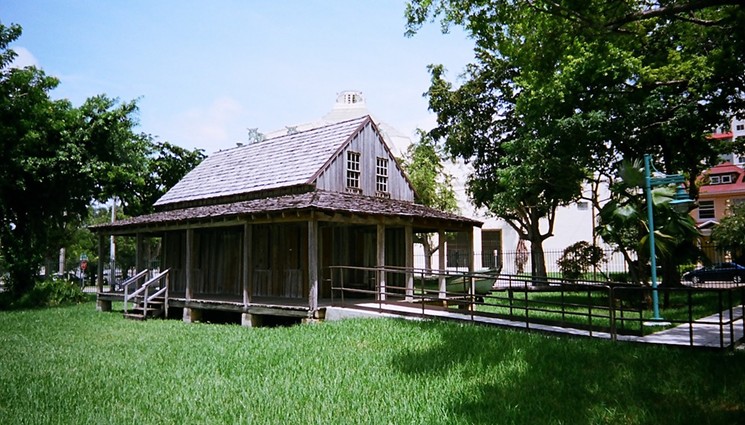 The Wagner Homestead at Lummus Park.
Photo by Phillip Pessar/Flickr

360 NW Third Street, Miami
305-960-2920
miamigov.com/Residents/Parks-and-Recreation/Parks-Directory/Lummus-Park
While Miami Beach’s Lummus Park tends to be the one that comes to mind, there happens to be another Lummus Park: in downtown Miami. Built in 1909, the park continues to provide a glimpse into Miami’s early years as a pioneering city in the South. The majority of the buildings surrounding the park were built prior to 1926, and their architecture is unique in its construction and diverse in style, from the militant native limestone of Fort Dallas to the Masonic columns of the Scottish Rite Temple. Stroll the historic promenade with a direct view of the Miami River and find yourself transported back in time. Open daily sunrise to sunset. 780 NW 127th Ave., Miami
miamidade.gov/parks/north-trail.asp
Another skate park on this list that’s not Lot 11? This Spohn Ranch concrete creation offers a cozier, community-based atmosphere for skaters looking to practice and mingle on the county's western fringes. Besides existing as a hub for the local skate scene, the park offers after-school programming opportunities for kids, along with a well-rounded assortment of facilities for all of your fitness needs. Open daily sunrise to sunset. 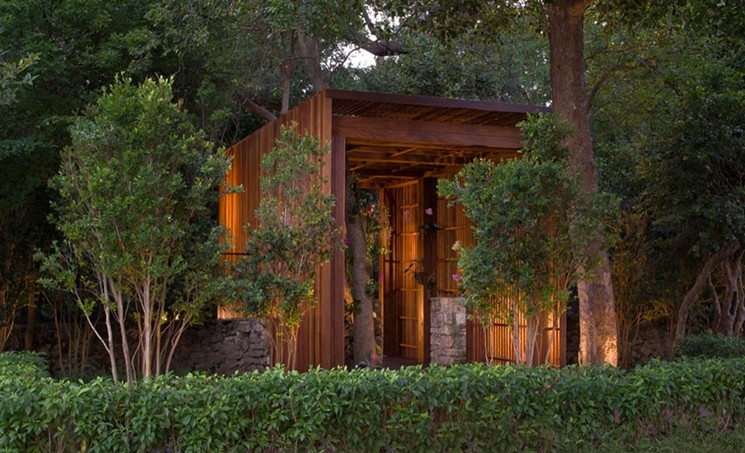 55 SW 17th Rd., Miami
305-859-2867
miamigov.com/Residents/Parks-and-Recreation/Parks-Directory/Simpson-Park
Encased by Brickell highrises and I-95 traffic is Simpson Park, formerly known as Jungle Park. While on the smaller side of the parks on this list, Simpson Park is more about what it provides to city dwellers than what’s actually within — though it's stunning in its preservation of one of the last remnants of the tropical hardwood hammock in Brickell. With over 96 varieties of native tree and plant species, 15 endangered species, and nine threatened species — and even a pavilion constructed in collaboration by Miami architect Chad Oppenheim and Swiss landscape designer Enzo Enea — the park is a testament to the persistent commitment of those who have fought to preserve the city’s natural roots from heedless urbanization. Open Monday through Friday 8 a.m. to 3 p.m. 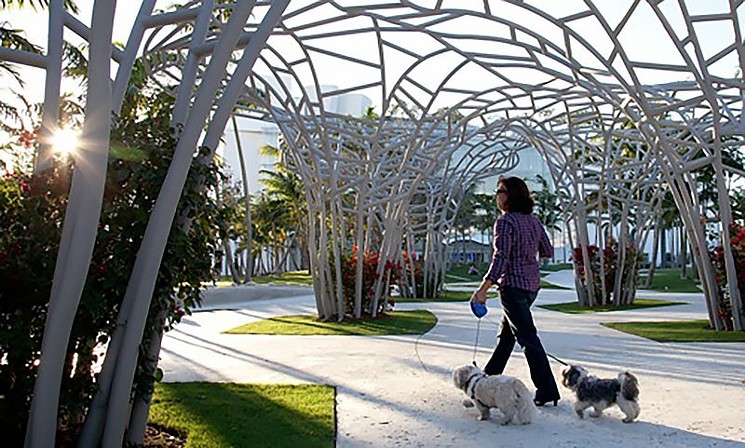 View of bougainvilleas at Soundscape Park in Miami Beach.
Photo courtesy of West 8

400 17th St., Miami Beach
305-673-3330
nws.edu/new-world-center/rent-new-world-center/soundscape-park
If life has brought out anything from deep within us of late, it’s the desire to enjoy each other’s company in the natural environment. But the same goes for entertainment. Soundscape Park in Miami Beach includes a grassy area where one can recline to view the screen that’s projected on the side of the New World Center. With Walllcast concerts scheduled to play live classical music performances and the Soundscape Cinema Series providing a weekly 7,000-square-foot screen projection on which one can watch movies for free at night, the urban park enables Miami’s nightlife to thrive in an organic way. Designed by West 8, an urban-planning and landscape-architecture firm based in the Netherlands, the park is complete with aluminum structures that supply shade for its visitors and support the many bougainvillea trees scattered throughout the space. Admission is free depending on special events. Open 24 hours. 10251 W. Flagler St., Miami
305-480-1717
miamidade.gov/parks/womens.asp
Rather than being named after a singular woman who has impacted the history and state of Miami, the Women’s Park pays homage to the endless contributions of yesterday, today, and tomorrow’s South Floridian females. Greeting visitors with a sculptured gate and fence designed by artist Lydia Rubio, which was created in partnership with the Miami-Dade Art and Public Places program, the park bears the name of many women who have had an impact on the city’s development. Historical bonus: A time capsule buried under the oolite limestone in the park at its inauguration in 1992 is set to be opened this year, revealing the zeitgeist of the city at the time of its creation. Open daily 7 a.m. to sunset.
KEEP MIAMI NEW TIMES FREE... Since we started Miami New Times, it has been defined as the free, independent voice of Miami, and we'd like to keep it that way. With local media under siege, it's more important than ever for us to rally support behind funding our local journalism. You can help by participating in our "I Support" program, allowing us to keep offering readers access to our incisive coverage of local news, food and culture with no paywalls.
Make a one-time donation today for as little as $1.