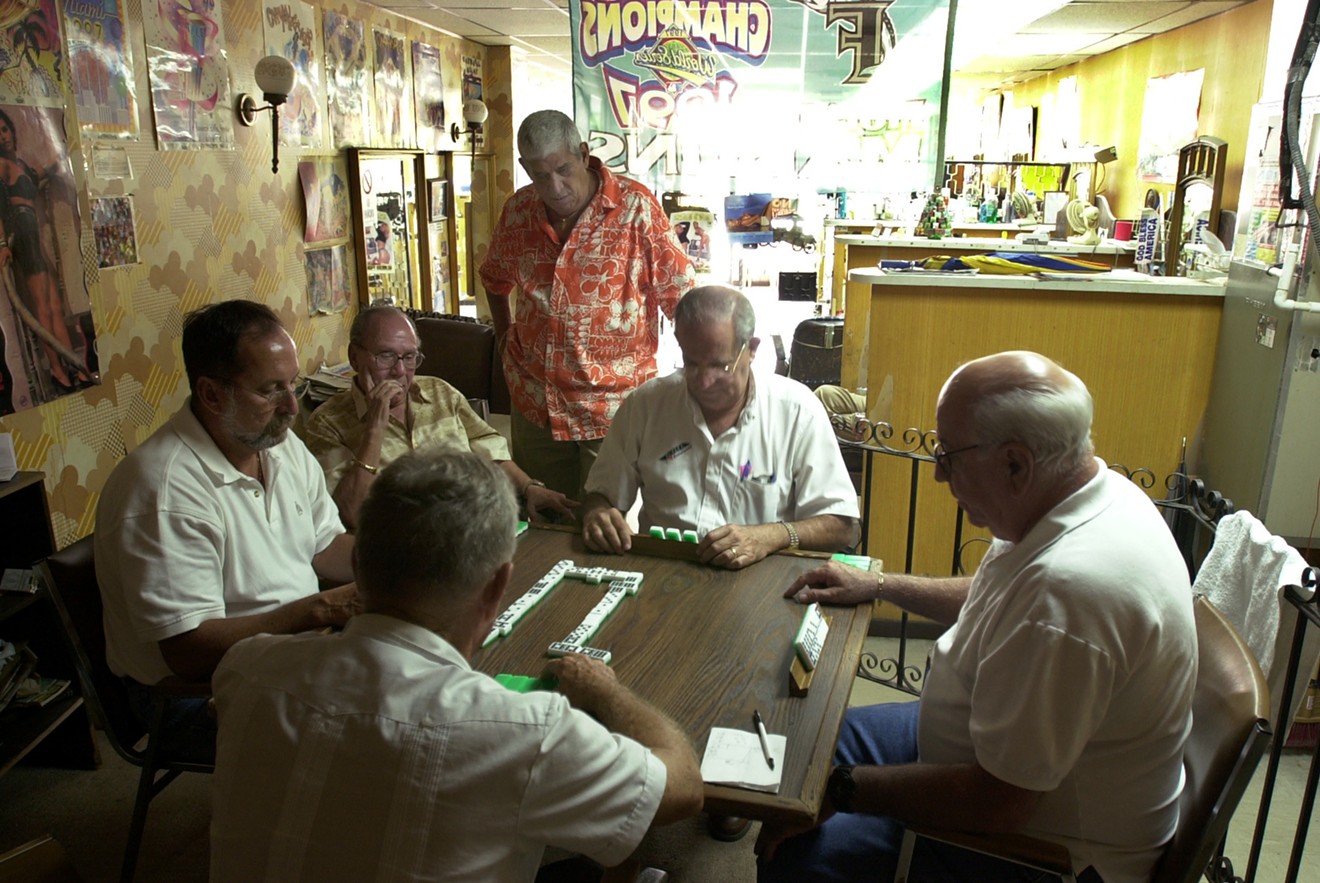 A user posted a real poser on the r/Miami Reddit this week: What is the real Miami to you?" Photo by Knight Foundation/Flickr
Attempts to define "the real Miami" often reveal a funhouse mirror of shiny sports cars, curvilinear condo towers, and surgically modified body parts. (That, or dominoes and pastelitos.) Seemingly fed up with this Facetune depiction, Reddit user lightyerr challenged the r/Miami forum earlier this week to come up with something more accurate.

"I saw a TikTok montage of Miami Beach, Brickell, nightclubs, outdoor scenery, etc. All the comments were something along the lines of 'This is not the real Miami,' 'I wish this is how Miami really was,' "Visiting is different than living here,'" lightyerr wrote. "My question is: What is the real Miami to you? What do you see that the media never portrays?"

In under two days, the solicitation has attracted more than 305 comments. Some are snarky, some insightful.

And a large number have been posted in reaction to an insightful response authored by u/HaraldRedtooth, which began:


"You live in a West Kendall housing development with your mom, dad, grandma, grandpa, and uncle in a square-shaped single-family home identical to all the houses around you (or alternatively, with your significant other in a 500-square-foot efficiency in Sweetwater.)

During the summer, the street outside your home becomes a canal three times a week. You are woken up each morning by the chickens which your Santero neighbors raise for sacrifice in their yard. Your rent is 40 percent of your income...."

u/HaraldRedtooth's rendition of the real Miami took us on a Homeric odyssey — if Odysseus had made a side trip to Miami en route to Ithaca after the Trojan War to navigate our flooded streets, dodge reckless motorists on interminable commutes, and subsist on beans, rice, and "lechón left over from your tio's Memorial Day barbecue at A.D. Barnes Park."

By the stroke of midnight on October 12, the 324-word prose poem had netted 1,700 upvotes. A veritable highlight reel of the hallmarks of the "Real Miami," the Bruegel-worthy portrait inspired comments like, "I have never read a truer depiction of my hometown."

And: "Couldn't have painted a better picture without using a brush."

And "Jesus Christ. Born and raised in Miami. Nothing has described this shithole better."

And: "Man, you nailed about 70 percent of my life with this. Spot on."

In a similar vein, a screenshotted version posted to Twitter has inspired 4,400 retweets and nearly ten times that many likes.

Reached by New Times, u/HaraldRedtooth revealed himself as Miami native Zac Cosner, a resilience programs manager with the City of Miami by day and a deep thinker by night and lunch break, the latter being when he penned his vignette.

"I was bored on my lunch break, and I was eating a quarter-chicken and rice and beans and maduro, which definitely lent to it. I wrote it thinking it was kind of funny, as I do enjoy writing, but I didn't expect it to go as viral as it did," says Cosner, who's 27. "I think it came out darker than I actually believe, because I love this town, I love Miami, and I am privileged to live here."

A second-generation Miamian, Cosner was born in Little Havana and later moved with his family to Pinecrest, where he grew up and attended Palmetto High School. Considering his repeated mentions of rice and beans, many Redditors were surprised when Cosner shared in the Reddit thread that he isn't Cuban and admitted his Spanish "could use a little work." He graduated from the University of Miami, and except for a brief stint in Tallahassee for work, he has never lived outside Miami-Dade County and would prefer that it stay that way. He's a big fan of the Everglades and Biscayne National Park and describes himself as a "weird Miami nerd who loves the swamp and chaos."

Though some users saw Cosner's response as harsh and critical, he clarifies that it's his love for Miami that fuels his work as a climate activist and board member of the Miami Climate Alliance.

"Miami is a beautiful place on the Earth that I like a lot. It's got a lot of problems, a huge amount of problems, and I've made it a big part of my mission to try to solve those problems both for myself and others," Cosner says. "But it needs people who care about it, who can build the community and build the infrastructure that we'll need to tackle the biggest crisis humanity is facing right now. What's really crazy about Miami is that this weird, chaotic town with supposedly no past and no future is at the forefront of tackling climate change. It's such a unique, active part of history — why wouldn't I want to participate in that?"

The outpouring from fellow r/Miami-ites has motivated Cosner to continue writing about Miami. Though most of his response is only loosely based on personal experience, he notes that the ending — being "struck and killed by a leased Audi being driven by a cokehead" — was inspired by a real-life near miss.

"I was in the passenger seat of a vehicle and there was a near collision and the guy got out of his leased Audi and went up to the window and broke my nose," he recounts. "It was near Miami Beach and he seemed a little aggro I lived, and not too much the worse for wear thanks to the doctors at Jackson Hospital.

"You collect a lot of stories in this place," he concludes, "and I enjoy them."


"You live in a West Kendall housing development with your mom, dad, grandma, grandpa, and uncle in a square-shaped single-family home identical to all the houses around you (or alternatively, with your significant other in a 500-square-foot efficiency in Sweetwater). During the summer, the street outside your home becomes a canal three times a week. You are woken up each morning by the chickens which your Santero neighbors raise for sacrifice in their yard. Your rent is 40 percent of your income.

"You drive your 2008 Honda Civic with a bad transmission everywhere you go, including 1.5 hours each way to your job downtown because you don't live close enough to the Metrorail to make use of it. You have resigned yourself to the fact that the rail extension you were promised years ago is never happening. You spill your colada on yourself while frantically swerving to avoid a collision with a leased BMW being driven by a cokehead at least once per week.

"Sometimes after work you go to a Pilates class or CrossFit gym in a converted warehouse. On Friday nights you go to drink craft beer or smoke hookah in a different converted warehouse. If you are feeling really crazy you will Uber downtown to party in Wynwood or Brickell, losing approximately 10 percent of your net worth in the process.

"You are in debt.

"Sometimes at sunset you feel a gentle breeze tinged with the smell of the ocean and look up towards the sky to see a chittering flock of parrots swirling beneath pink-tinted clouds. For a moment, it's all worth it. Then you are struck and killed by a leased Audi being driven by a cokehead."

[Editor's note: The quotations lifted from Reddit for this story have been lightly edited for spelling and punctuation.]
KEEP MIAMI NEW TIMES FREE... Since we started Miami New Times, it has been defined as the free, independent voice of Miami, and we'd like to keep it that way. With local media under siege, it's more important than ever for us to rally support behind funding our local journalism. You can help by participating in our "I Support" program, allowing us to keep offering readers access to our incisive coverage of local news, food and culture with no paywalls.
Make a one-time donation today for as little as $1.