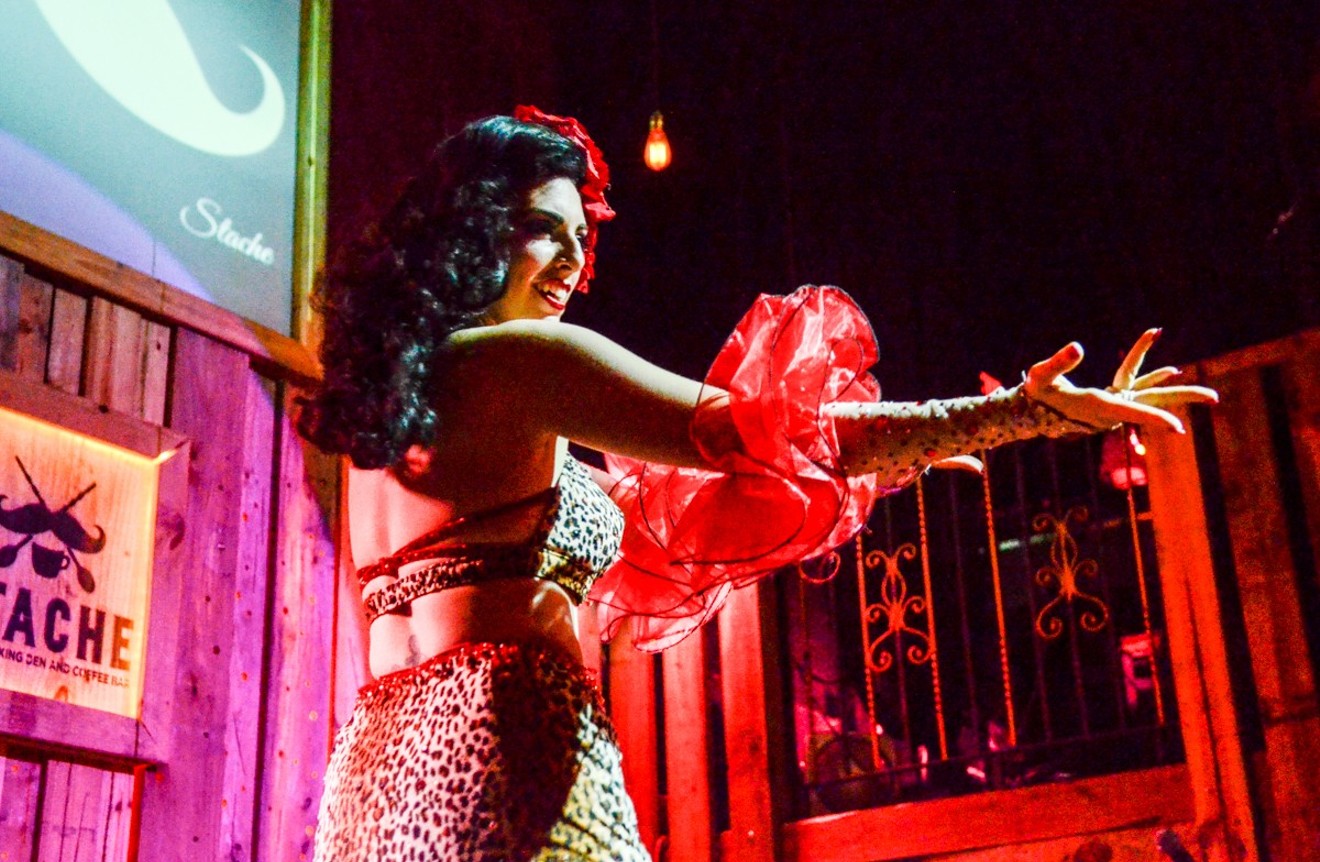 Photo by Carina Mask
South Florida’s burlesque community is close — like, official-Facebook-page-with-a-shared-login close. When New Times sent a message to the South Florida Burlesque page on Facebook, we received numerous responses from some of Miami-Dade and Broward’s biggest names in burlesque in just a matter of minutes. That’s because these performers and their troupes, or what they call “revues” share one thing in common: mutual respect and high praise for one another. So much so that they not only advertise events for one another but also perform as special guests in one another’s shows. Two of Miami’s most popular entertainers are even married to each other. All of this and more are reasons why these folks know the recipe for creating some of the best burlesque nights in South Florida. 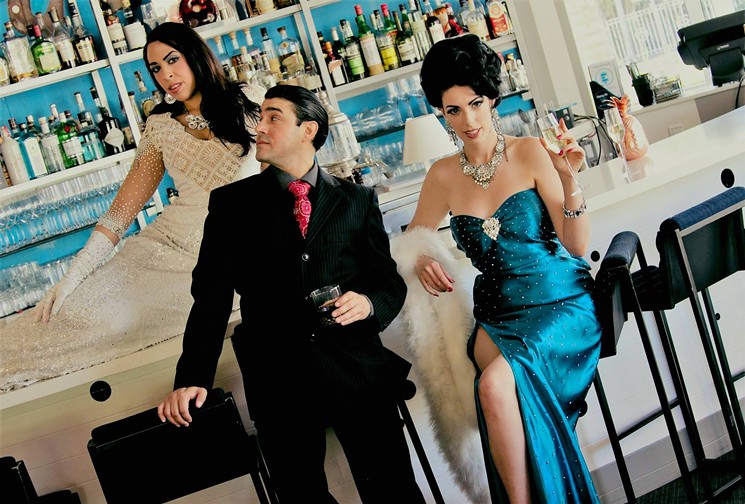 Burlesque Dinner Party by Moon River Cabaret is a monthly burlesque and variety show at Vagabond Kitchen & Bar in Miami’s MiMo District. The event earns New Times' top spot on this list because of its combination of old-school burlesque, singing, comedy, and a full dinner and drink menu, all in an event that is suitable for the whole family. Entertainers and producers Rio Chavarro and his wife Sofia Luna founded Moon River Cabaret in 2014. You might have seen them at Vinos in the Grove, where they performed monthly for the past four years. Now Moon River Cabaret has a residency at Vagabond, where they’ve embraced “a '60s theme with Mad Men style” to fit the architecture of the MiMo District, according to Chavarro. He not only MCs the dinner party but also sings, does comedy, and, most important, “brings out the ladies” (or so he says). Burlesque Dinner Party takes place at Vagabond the first Thursday of every month. The next show will take place June 1st at 9 p.m. For more information, visit Moon River Cabaret on Facebook. 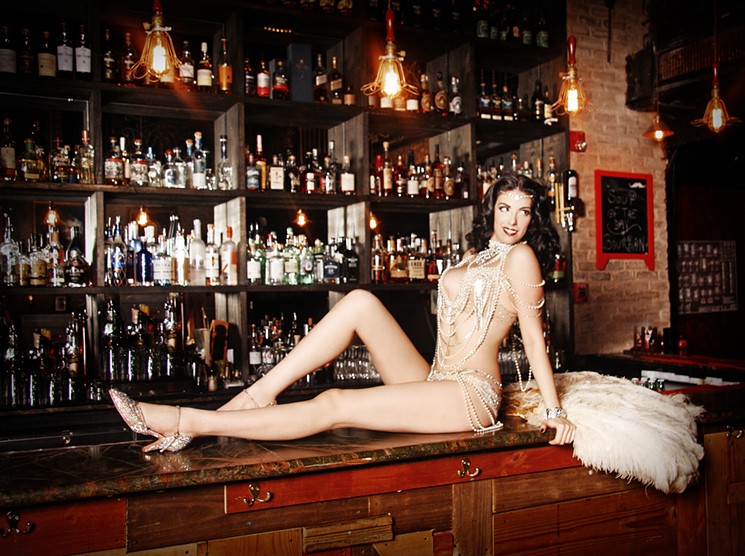 Miss Aurora Natrix is not only the producer of the Ritz Glitz Revue, a monthly upscale burlesque show at Stache Drinking Den in Fort Lauderdale, but also the main performer. Hailing from London, Natrix, known as “the British Invasion,” has been producing this upscale, intimate burlesque show at the classic speakeasy for the past three years. Her show is like a step back in time because of its focus on classic burlesque and traditional costumes spanning from the 1930s to the '60s. The show features a rotating cast of performers from across Florida and beyond, including Moon River Cabaret’s Rio Chavarro, who MCs the event. Ritz Glitz Revue takes place the second Saturday of every month. You can catch the next show this Saturday, May 13, at 8 p.m. Expect performances by Sofia Luna, Chavarro, special guest Elsa Riot, and Erika Moon, one of the best-known burlesque producers in South Florida. For more information, visit Aurora Natrix on Facebook. 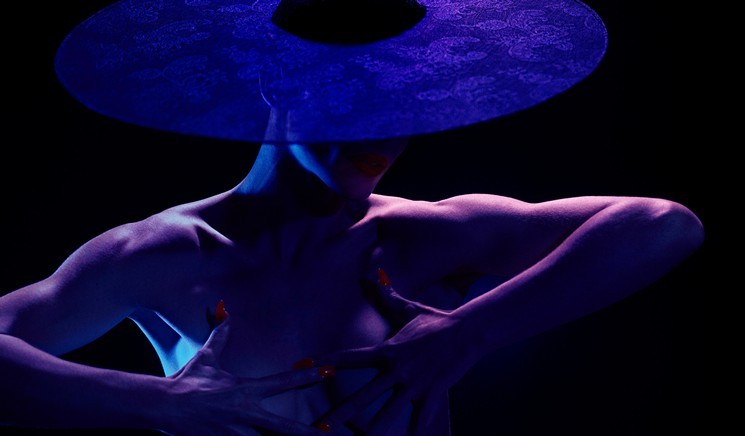 C’est Rouge! at the Faena Theater in Miami Beach is a bit more exclusive than most burlesque shows in South Florida, but for good reason: The late-night cabaret is one-of-a-kind. The performance, which takes place in the 150-seat theater inside the Faena Hotel, offers Latin, jazz, and R&B beats, which are enhanced by wild costumes worn by actors, dancers, and even acrobats. The fantastical production, courtesy of Alan Faena, is a collaboration between the hotelier and Spanish choreographer Blanca Li. Adding to the glamour is the theater's decor, luxurious in velvet, gold leaf, and chandeliers. You can catch C’est Rouge! every Thursday, Friday, and Saturday night at the Faena Theater. For tickets, visit ticketmaster.com or faena.com. 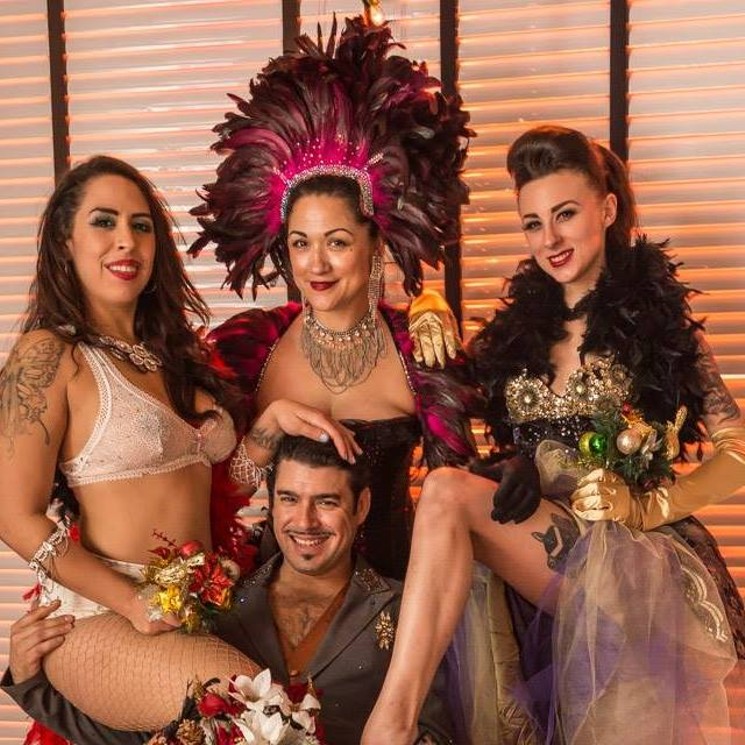 Shameless Burlesque was founded in 2008 by Holly Peno, Nicole Resnick, Morgan La Rue, and Aurora Natrix with a show called A Vaudeville Vibe at Churchill's Pub. Since then, the troupe has performed at other Miami venues including the nightclub the Vagabond, Will Call, Moonchine, and Purdy Lounge. You can catch the troupe at Kill Your Idol the last Friday of every month. For more information, visit Shameless Burlesque on Facebook. 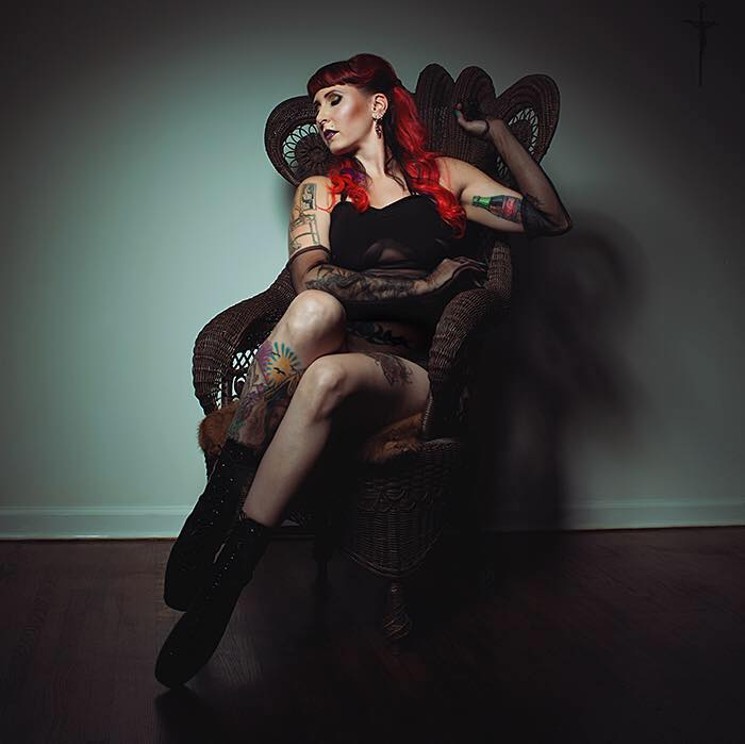 Last, but certainly not least, is The Shimmy Shake Revue, a burlesque show founded in 2011 by the "Drop Dead Red Head," Morgan La Rue. The revue features a rotation of "sultry seductresses" from Shameless Burlesque and the Ritz Glitz Revue, as well as performers from all over the world. La Rue is such a fan of her rotating seductresses that she even encourages fans to look them up on Facebook, "for all the info your little hearts desire." La Rue and The Shimmy Shake Revue return to the Falcon Pub in Davie May 21 with special guest Jezebelle Red. The show is free and begins at 10:30 p.m., with acts every 30 minutes until midnight. For more information, visit the Facebook event page.