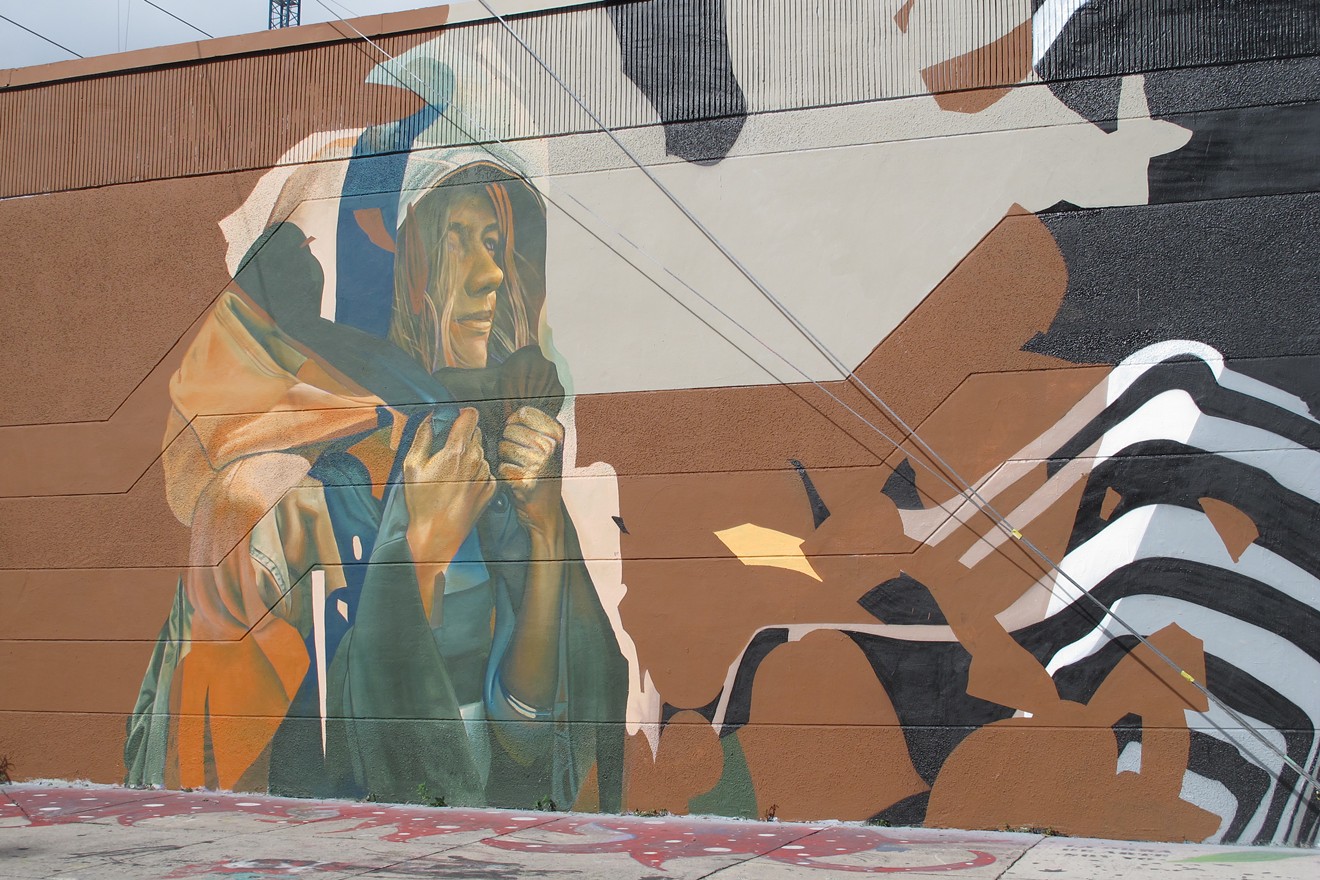 A portion of Telmo Miel's mural in Wynwood. Photo by Douglas Markowitz
There weren't many new murals in Wynwood following this year's edition of Art Basel Miami Beach. Even at Wynwood Walls, which seems to recycle its collection of street art constantly or at least annually, few new additions made the cut. Maybe it's just that the neighborhood is no longer considered cool, with the center of trendy gravity shifting away from the gentrified, touristy neighborhood. Maybe the artists are simply looking for new canvases out west. Still, it seems worthwhile to seek out more noteworthy murals that went up this year, if not for their quality, then for the way they reflect the changes in the area.

Here are ten of New Times' favorite pieces of street art that have appeared in Wynwood since Art Basel.

Facilitated by Miami's RAW Project, the world-famous artist's latest mural in Miami gives a poignant new coat of paint to the public elementary school on the edge of the arts district. Shepard Fairey's clean graphics, mixture of natural and industrial themes, and blue color scheme emphasize the piece's eco-conscious theme. Thirty-one artists, including Fairey, are scheduled to paint parts of the school in an effort to introduce art to the area's students.

"JONONE" is a word painted in the corner of this piece on the east wall of the Taco Stand on NW 25th Street, so that's the name we'll give this colorful mural. Its riotous colors and abstract shapes look like plants or animals or whatever you might see while looking at it. It's like a Jackson Pollock painting, right down to the paint splattered at the bottom. 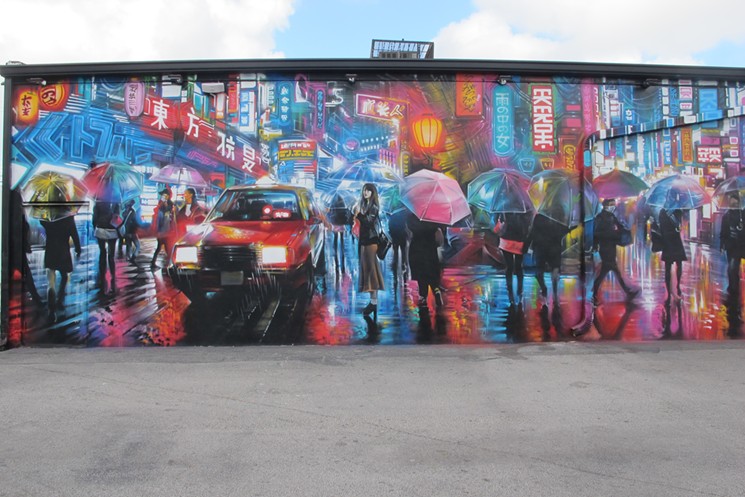 U.K. artist Dan Kitchener transports Wynwood Walls visitors to the neon-drenched streets of Tokyo on a rainy night, where puddles on the ground reflect the colorful lights above. Our eyes feast on the sumptuous details before being drawn to the woman in the center. Is she looking at us or past us?

Lush foliage covers this corner of Wynwood Walls courtesy of muralist Montague. The artist was recently commissioned to paint select walls at Marjory Stoneman Douglas High School following the February 2018 mass shooting there. We like this mural for its muted palette, bold lines, and whimsical mood. What's behind that door?

1UP Crew's mural in Wynwood.
Photo by Harry Skran

Straight outta Kreuzberg, the hippest neighborhood in tragically hip Berlin, 1UP is the kind of crew that puts the danger back into street art by tagging walls in broad day and filming it all. Their new project in Wynwood is videogame-inspired, giving the whimsical map style of Super Mario World a humorous, urban spin. Have your Super Nintendo controller ready.

This diptych by the Dutch duo Telmo Miel shifts from representational, depicting a hooded woman clutching the front of her clothes, to abstract, with a datamashed zebra print that looks like a waterlogged, paper-jammed version of the Wynwood Building on NW Third Avenue. Sometimes you just gotta give 'em the old razzle-dazzle.

Murals in Wynwood usually take on more fantasy-inspired subject matter, so this domestic scene by Paucar is notable for the way it takes a down-to-earth subject and imbues it with a bit of style. The blue-orange contrast and the glitchy, mosaic-like texture give the everyday setting a bit of edge.

This mural's size and placement on the Related Group's colossal new apartment complex has left it looming over everything else in the area. It represents the beginning of a new era in the art history of Wynwood, when development and money — rather than the artists who made the place famous in the first place — drive what people see in the area. This image is supposed to be benign and even welcoming — it's a group of racially mixed children holding flowers; that's the very definition of nonthreatening — but still, knowing the forces that set it into place makes it seem ominous. In the years to come, what else might stare down at us from that giant wall?

If "Wynwood" spelled out by a bunch of Mickey Mouse glove hands doesn't say, "Wynwood in 2019," we don't know what does. It's as unsubtle a bid for tourist selfies as they come (or maybe it's a commentary on that tourism). Either way, the fact that it's definitely not sanctioned by Disney — the company that seems to own half of all entertainment and intellectual properties nowadays — and that the hands vaguely resemble gang signs means the work is, at least functionally, a transgressive piece of art. Look at it this way: If the House of Mouse ever got wind of this mural's existence, it would be nixed. Enjoy it while it lasts!

A graffiti tribute to Juice Wrld in Wynwood.
Photo by Douglas Markowitz

This one obviously isn't an authorized or permanent artwork. It must have been painted within the past few days, and it'll probably come down pretty soon. It's a tribute to Juice Wrld, AKA Jared Higgins, the rapper behind hit singles such as "Lucid Dreams." Higgins, who was also known for his freestyle rapping skills, died tragically this past Sunday, December 8, from a seizure at Chicago Midway International Airport. This quick graffiti tag not only represents people inspired by Higgins who are mourning his untimely loss, but also recalls a time before Wynwood was gentrified, when this type of art was neither encouraged nor financed, when it was a truer expression of an underclass whose members expressed themselves on the street, where they could not be ignored. These facts mean that, of all the murals on this list, this one is the most resonant. Stop by and leave your own tribute while you can.
KEEP MIAMI NEW TIMES FREE... Since we started Miami New Times, it has been defined as the free, independent voice of Miami, and we'd like to keep it that way. With local media under siege, it's more important than ever for us to rally support behind funding our local journalism. You can help by participating in our "I Support" program, allowing us to keep offering readers access to our incisive coverage of local news, food and culture with no paywalls.
Make a one-time donation today for as little as $1.