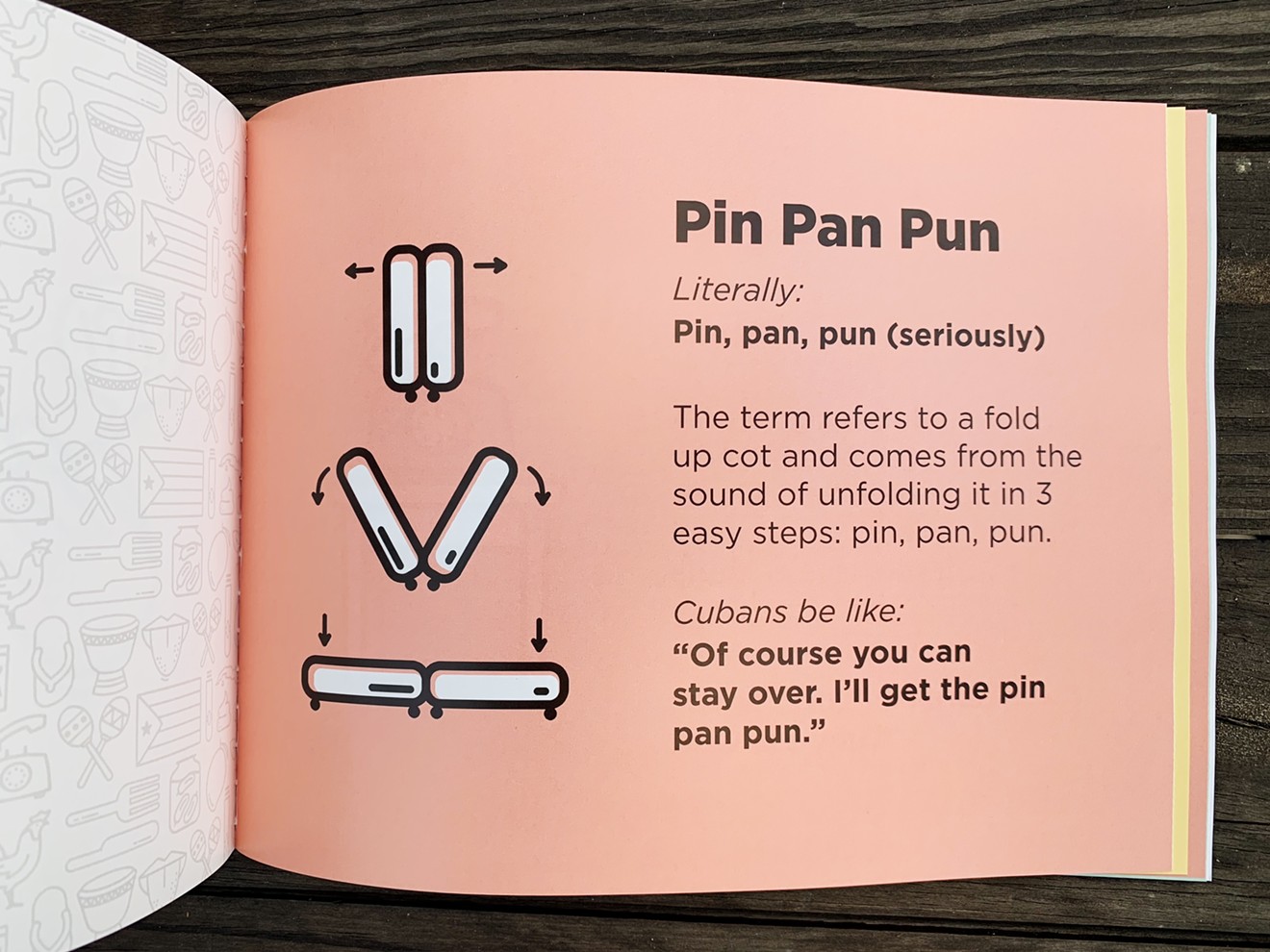 Going for a sleepover? Don't forget the pin pan pun. Denise Miqueli
Bistro lights hang low in the dining hall of the Citadel in Little Haiti. Sitting in the center of the dimly lit space, a woman crouches over her iPad while doodling some phrases and graphics to explain them. Amid the cacophony of conversation and clinking dinnerware, Denise Miqueli is in her own world.

The 38-year-old graphic designer recently self-published a short book about common Cubanisms, Pin Pan Pun. The 20-page book introduces popular phrases commonly expressed by Cubans, defines them in layman's terms, and even offers examples of their usage in sentences. The phrase is also paired with a visual representation.

“We launched the book in March of this year, and the response has been both humbling and surprising,” Miqueli says. “It has all been a really fortunate accident that it has been so well received.”

“I noticed that I would say stuff and he wouldn’t understand what I meant,” the Miami native says. “So I decided to gather my favorite phrases and put them together in a book for him so he had a nice little reference.”

The phrase that set her on this new adventure is “ese huevo quiere sal,” which translates to “that egg wants salt” and refers to a person with an ulterior motive who secretly wants something. She was driving with her husband one day when she made the comment, and he gave her a look of complete confusion. “I wrote down [the definition for him] and knew I had to do something about it,” she says with a smile.

The book features recognizable phrases such as “¿Oigo?” which literally translates to “I hear?” and as Miqueli expertly defines it, it’s “a traditional Cuban greeting when answering the phone. Similar to 'hello,' it’s still being used by abuelos and abuelas everywhere.” Another example: “Me importa tres pepinos,” or, as Cubans sometimes translate it, “I couldn’t give three shits.”

When she began working on the book, she tapped into the iconography she found via the Noun Project online. Now, as she heads into working on the second volume of Pin Pan Pun and content for her Instagram page, Miqueli says she does all of her own illustrations. “I have a renewed passion for illustrating now, and I don’t think I would have found that had it not been for this book.” 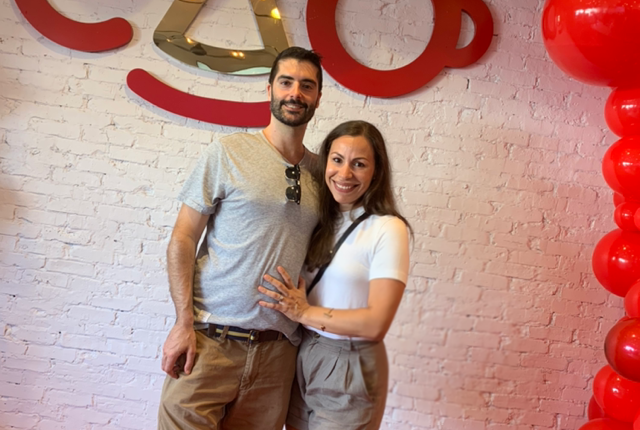 Miqueli with her partner-in-crime and inspiration for the book, her husband Alex.
Denise Miqueli
Growing up in Miami, Miqueli had plenty of idioms from which to choose. She narrowed the list to an even 20 for the first version and says she already has a growing list for future volumes.

“I try to make the definitions as conversational as possible,” she says. “I think about it like how you would explain your favorite Cubanism to a tourist from Missouri, and that’s how I write them.”

The research came easy to her, she says, “because I just used all the ones I knew.” And if she needed to verify a thing or two, she would consult with the internet, not her big Cuban family.

“Whenever I would ask my mom or father-in-law for clarification on a phrase, they would send me like 30 more Cubanisms!” Miqueli laughs. “And if I didn’t have one they suggested, they’d be like, ‘¡Pero, niña!’ And I love that reaction, but it’s not the help I needed.”

She would, however, share some idioms with her mom to test the waters. “If she laughed, I knew it was good.”

For many Cuban-Americans, the book will be a warm reminder that their families aren't the only ones that drop some unusual sayings.

“The book has really resonated with a lot of restaurants, which I would have never even thought of,” Miqueli says with a look of honest bewilderment. She goes on to list the places she’s partnered with to sell her book, such as the Cuban-American diner Chug’s, Cao Bakery, Burger Beast’s museum at Magic City Casino, and more traditional venues such as Books & Books and Exile Books.

“I think for people like me who are second-generation Cuban-Americans, we carry certain traditions we grew up with. But growing up in Miami and in the U.S., we’ve also almost transformed these traditions and made them our own. I feel like the book is an extension of that — it’s my way of taking things we remember about our parents growing up and making sure they live on.”

Pin Pan Pun. Available at pinpanpun.co or in select retail stores for $14.50. Follow @pinpanpunco on Instagram for more details and book updates.
KEEP MIAMI NEW TIMES FREE... Since we started Miami New Times, it has been defined as the free, independent voice of Miami, and we'd like to keep it that way. With local media under siege, it's more important than ever for us to rally support behind funding our local journalism. You can help by participating in our "I Support" program, allowing us to keep offering readers access to our incisive coverage of local news, food and culture with no paywalls.
Make a one-time donation today for as little as $1.