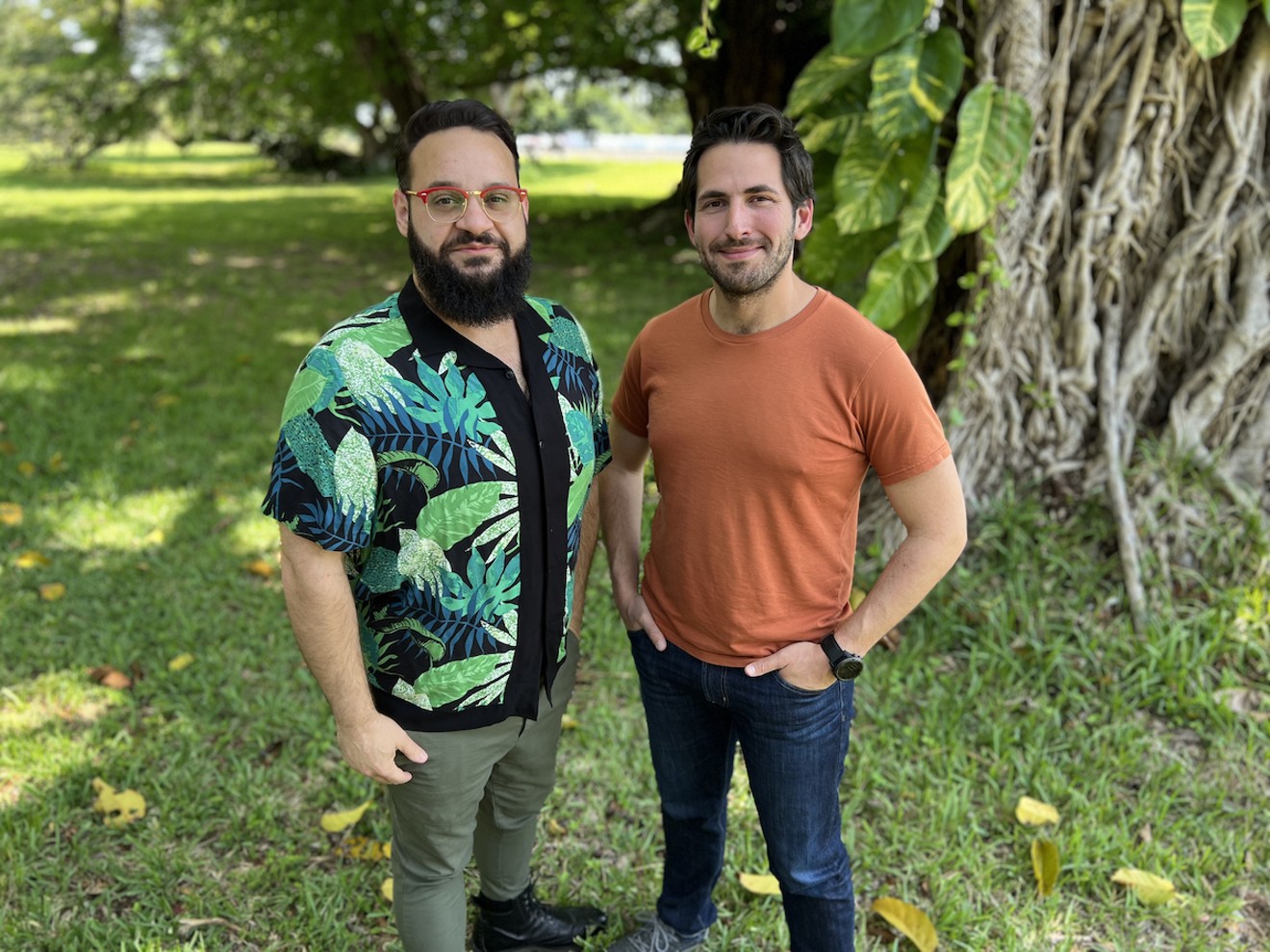 Kareem Tabsch (left) and Joey Daoud, producers of Paradise Lost Photo courtesy of Trojan Horse
Miami and true crime are a match made in, well, hell.

Since its inception, the city has attracted nefarious characters, culminating in 1981, when Time magazine released its infamous November issue in which it declared Miami "Paradise Lost." For any other city, it would have been considered a black eye to its reputation, but the Magic City has always found a way to embrace its perceived lawlessness.

From authoritarian leaders accused of massacres to serial killers not wanting to be found, the southern tip of Florida can sometimes feel like an alternate reality where being a criminal doesn't stop you from holding a position of power — hell, it doesn't even stop you from holding office.

Wanting to preserve South Florida's sordid history are producers Kareem Tabsch and Joey Daoud. Borrowing its name from that Time cover, Paradise Lost: Crime in Miami is a 13-episode podcast — presented by iHeartMedia's My Cultura podcast network and a co-production with Sonoro and Trojan Horse — that delves into some of Miami's most lurid true-crime stories. It made its debut last week with an episode devoted to the godmother of Miami crime, Griselda Blanco.
"Miami is such a wellspring of bizarre stories that it made sense to revisit some of them," Tabsch says. "The podcast tells the story of the city through the crime that has happened here."

Tabsch and Daoud felt it was fitting to launch the series with Blanco, a woman whose story has elevated her to mythical status — which perhaps makes people lose sight of the fact that she was also responsible for a lot of death and violence. Known as La Madrina and the "Black Widow," she was accused of having a hand in at least 40 murders between New York City and Miami, including the killing of a two-year-old boy in a drive-by shooting at SW 168th Street and South Dixie Highway in 1982.

The second episode, which premieres tomorrow, focuses on Linda Cooney, the Palm Beach socialite who shot and killed her ex-husband, Jim, in 1992, and later shot and paralyzed her son, Kevin, in 2011 — reportedly with the same gun.

Both Tabsch and Daoud have made careers out of storytelling. In addition to cofounding O Cinema, Tabsch codirected the documentaries Mucho Mucho Amor about the life of TV psychic and pop-culture phenomenon Walter Mercado and The Last Resort, which explores 1970s Miami Beach through the lens of photographers Andy Sweet and Gary Monroe. Daoud, a distant relative of former Miami Beach mayor Alex Daoud, who fell from grace on bribery charges in 1991, is also a documentary producer now based in Los Angeles; he and Tabsch codirected the short Dolphin Lover, which tells the story of Malcolm Brenner, a real-life zoophile who claims to have had a sexual relationship with a dolphin.

"In our show intro, we say, 'Florida: Sunny place for shady people,'" Tabsch says about the city's reputation for illicit doings. "Florida has always been wild, it's always been the Wild West. It feels like there are no rules here, that nobody is going to hold you back. It's a place where people come to reinvent themselves."

Miami and the entire state's transient nature is the perfect breeding ground for the WTF headlines that have made the word "Florida" synonymous with crazy crime stories.

"It's the kind of place you don't want to ask people what they used to do because you don't really want to know," Tabsch asserts. "I also think in a weird way South Florida has embraced its craziness and embraced its criminals. You think of these folks like Griselda and you ask yourself, 'Why are they larger than life characters?' They've become notorious, not just because of the brazenness of what they've done, but there's also this kind of head nod from folks like, 'Yeah, I get it.'"

You only have to look at movies like Scarface and prolific characters like Al Capone, who had a mansion on Palm Island and died here in 1947, to know that locals love a good if problematic anti-hero. Perhaps that's what also sets Paradise Lost apart from other true-crime podcasts: it's not necessarily looking to uncover some overlooked piece of evidence or pass judgment — if anything, these stories are already well known to the general public. Instead, Tabsch and Daoud are more interested in what these crimes have to say about South Florida and its culture at large.

"We don't look at anybody with an idle lens," Tabsch notes. "We are not championing these folks. We're sharing these above-board stories and trying to do a deeper analysis. We want to take larger-than-life, stranger-than-fiction stories and unpack them in ways that our audience will consider what it means."

Future episodes of the podcast dissect the stories of Rudy Eugene, who earned the nickname the "Miami zombie" after he attacked and maimed a homeless man; cult leader Yahweh Ben Yahweh; the high-profile murder of designer Gianni Versace; and Jeremy Macauley, who was found guilty of the brutal double murder of Carlos Ortiz and Tara Rosado in Key Largo.

Paradise Lost: Crime in Miami can be streamed via iheart.com, Spotify, Apple Podcasts, and more.
KEEP MIAMI NEW TIMES FREE... Since we started Miami New Times, it has been defined as the free, independent voice of Miami, and we'd like to keep it that way. With local media under siege, it's more important than ever for us to rally support behind funding our local journalism. You can help by participating in our "I Support" program, allowing us to keep offering readers access to our incisive coverage of local news, food and culture with no paywalls.
Make a one-time donation today for as little as $1.