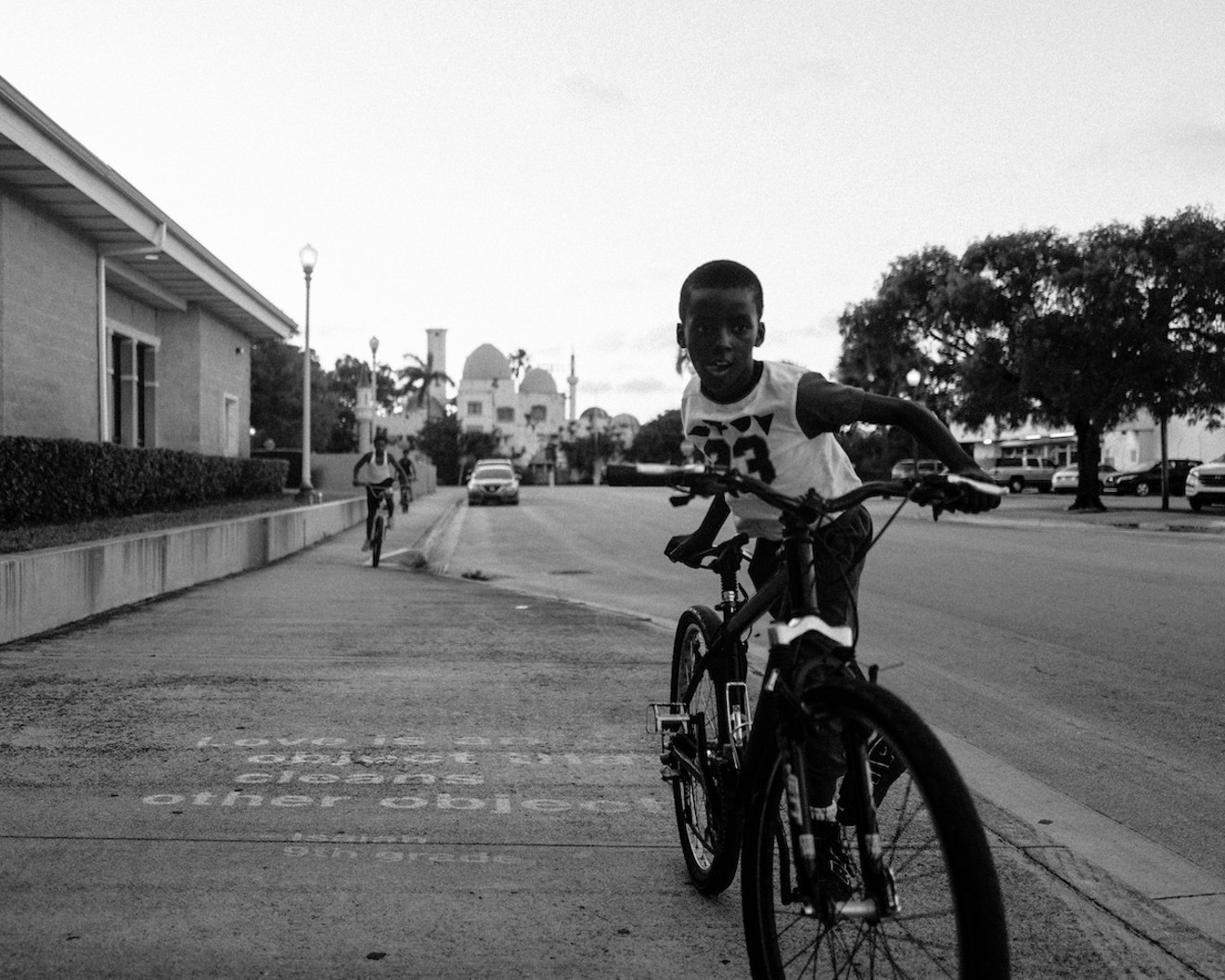 The Opa-locka Light District is a public art installation created by O, Miami and the Opa-locka Community Development Corporation. Photo by Gesi Schilling
The domes and minarets that top the buildings along Opa-locka Boulevard recall the dreams of one white man, a wealthy aviation manufacturer who, upon visiting Opa-locka in northwestern Miami-Dade County in 1926, fancied himself its discoverer and felt free to fashion four square miles into a foreign-inspired fantasyscape. Nearly a century later, Opa-locka is a community facing systemic issues from unemployment to poverty and substandard housing conditions.

On display now through the end of September, a public art project highlights the dreams and voices of the mostly Black and brown communities that call Opa-locka home, using streetlamps to project poems onto the buildings and sidewalks that line Opa-locka Boulevard. The Opa-locka Light District, created by O, Miami and the Opa-locka Community Development Corporation (OLCDC), is a winner of a Public Space Challenge grant from the Miami Foundation.

Local resident Junior Williams is one of ten poets whose work is featured in the project. When he was younger, Williams kept a record of his thoughts and aspirations in a journal but kept the musings private. When he learned of a poetry workshop held by O, Miami and the OLCDC, he attended and submitted a poem.

“My thoughts would turn into poems, but I never shared the poetry with anyone. One of my friends put in my head, ‘You should be a poet, for real, for real, for real.' I heard about this project and thought, ‘This is happening right in my neck of the woods. Let me show up and see what it’s all about.’” Williams recalls. “Later on, someone sent me a text of a picture of my poem projected on the sidewalk. I was like, ‘What? Where did you see that?’ That person replied, ‘In my dreams.’ My sister drove me over to city hall, and there it was, right out front.”

Williams’ poem reads: “A dream is a vessel that runs on the tracks of your mind.” He says the words are inspired equally by his immediate surroundings in Opa-locka and the spaces he explores in his mind. Just as his poem may conjure up otherworldly imagery in the reader, Williams says viewing the public art project in its entirety feels surreal.

“I consider myself a dreamer. Every waking moment, my thoughts are like a moving dream. And you can’t drive from one part of Opa-locka to the next without crossing the train tracks,” he explains. “This project is something I could never conceive of. You’re walking through the night, and you see these words of inspiration illuminated right on the sidewalks. This is the last place in Miami you would expect to see something like this.”

The Opa-locka Light District was conceived by Ashley Cover, who served as acting arts manager for the OLCDC and is currently data analyst for the city's department of family services. After seeing art projects utilizing light projection in public spaces, she started thinking about the challenges and ill-deserved reputation Opa-locka contends with.

“I remember seeing protest artwork being projected elsewhere in the country in 2016. I thought about how, in Opa-locka, a lot of people will tell you, 'You shouldn’t go there after dark.' They see it as a dangerous place. I thought: Why not introduce light to Opa-locka in the form of poetry?” Cover says. “To be able to illuminate the space with art like poetry brings a warmth to the area that people don’t associate with it.”

Ten streetlamps lining Opa-locka Boulevard project poems written by local students and adults.
Photo by Gesi Schilling
The OLCDC partnered with O, Miami, a local organization that aims to build community and equity through poetry, to hold workshops at Opa-locka schools and community centers, inviting citizens of all ages to create poems based on themes like light, speech, access, and equity. Melody Santiago Cummings, director of communications and development for O, Miami, says she hopes those who come across the projected poems are inspired to reflect on their own lives and community, ultimately resulting in joy.

“Good poetry can inspire a sense of belonging. You can recognize you’re not alone. I hope the residents see that this project was done with a lot of love and respect for the community, and I hope they feel a sense of ownership for it. This project shines a light on this community and on the power of poetry and words,” says Santiago Cummings. “There is a lot of division in our communities across Miami-Dade. We speak all kinds of languages here, but I hope that the citizens and visitors feel that this project expresses a true sense of Miami.”

Cover says Opa-locka, like most historically Black communities across the nation, battles systemic racism. Today, it is a food desert — a result of physical barriers the government erected at intersections in the 1980s, disconnecting neighborhoods from main thoroughfares. She hopes the public art project will encourage a new narrative about Opa-locka — written by Opa-locka citizens, for Opa-locka citizens.

“This project sets the tone for Opa-locka being a place of beauty and safety, which we believe will inspire more people to visit and hopefully build businesses and families here,” she says. “For citizens of Opa-locka to be able to see the coalescence of words and light used to capture their emotions and how they feel about where they live is kind of magical in its own sense.”

Williams says the Opa-locka Light District shines much-needed illumination on his city and community, and it makes him proud. He fondly recalls taking his niece and nephew to Opa-locka City Hall, where each word of his poem gleams brightly on the sidewalk, no matter the hour of night.

“Opa-locka is one of the most forgotten places in Miami-Dade County. We are the forgotten people,” Williams says. “It’s great that people like me can get their voices heard and have their thoughts and creativity shared so everyone can experience it. This should be a year-round thing. We should have more poetry get-togethers where Opa-locka residents and aspiring poets can share their craft, maybe even beyond Opa-locka.”
KEEP MIAMI NEW TIMES FREE... Since we started Miami New Times, it has been defined as the free, independent voice of Miami, and we'd like to keep it that way. With local media under siege, it's more important than ever for us to rally support behind funding our local journalism. You can help by participating in our "I Support" program, allowing us to keep offering readers access to our incisive coverage of local news, food and culture with no paywalls.
Make a one-time donation today for as little as $1.