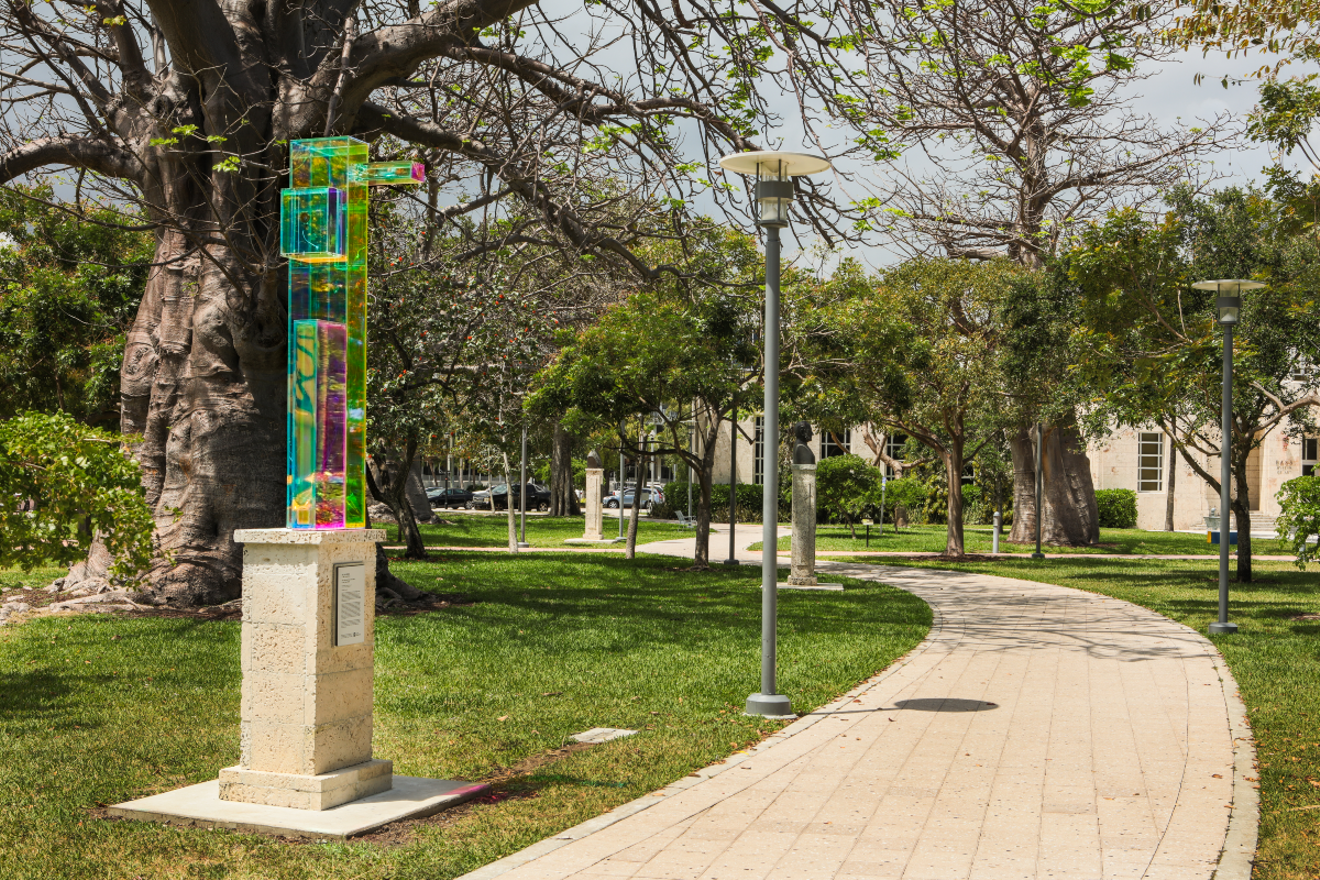 Your Momma's Voice In the Back of Your Head, a sculpture by Miami artist Najja Moon that was displayed in Collins Park by the Bass before it was vandalized and destroyed in January. Photo by Zaire Kacz/Courtesy of the Bass
Miami artist Najja Moon worked to commemorate the voices of mothers — supportive ones, loving ones, even harsh ones — but in an act of racially charged vandalism, someone tried to drown out those voices with slurs and anger.

Moon's multimedia sculpture, Your Momma's Voice in the Back of Your Head, went on display at the Bass in Miami Beach in March 2021, after Moon, a queer Black artist, was awarded the museum's New Monuments commission in the year prior. The piece, which was on display to the public in Collins Park, was composed of multidirectional speakers encased in colorful gradient glass, which played recordings of Moon's mother's voice and the voices of others who submitted recordings to the artist. The monument was meant to explore a familiar relationship that "exists across the spectrums of age, gender, race, faith, sexual orientation," and touch a collective audience, according to the artist's statement about the piece.

But on December 17, 2021, someone defaced the sculpture with spray paint, writing offensive messages seemingly aimed at Moon, including slurs directed at her race and sexual orientation: "Dike bitch, shut the F up and love Santa," read one. "Ignorant niggers," read another, according to a police report from Miami Beach Police Department (MBPD) attached at the end of this article.

Just 21 days later, on January 17, the sculpture was torn down in another act of vandalism, seemingly silencing the very voice Moon had tried to capture. The incident occurred the same week a person or persons unknown distributed anti-Semitic pamphlets around Miami Beach and Surfside blaming Jewish people for "the Covid agenda."

MBPD classified the crime as criminal mischief and worked with the Bass to investigate. But they found too little evidence to go on and wound up dropping the case.

"Unfortunately, there were no solvability factors such as witnesses, video surveillance, etc. Although the investigation is closed, we have increased patrols in the area. As always, we remind our community to immediately contact police if they see something out of the ordinary," MBPD spokesperson Ernesto Rodriguez tells New Times.

It took several months for Moon to speak publicly about the destruction of her art and the hateful messages involved in its destruction, but on March 6, she released a statement on her social media and on the Bass' website. When she was shown images of the messages, she wrote, she was shocked that she could cause someone so much personal pain as to warrant such a response.

"I was shocked. I became immediately paranoid and so hurt. I dreamed about it every night," the artist wrote. "I made a monument to my mother, to all our mothers and now I have to tell my mom that someone called me a dyke bitch and an ignorant nigger."

Artist Najja Moon shared recordings from friends remembering phrases their mothers would say.
Photo by Michael Del Riego/Courtesy of the Bass
The museum also responded to the crime against Moon, denouncing discrimination, "supremacy of any kind," and hate speech.

"The Bass unequivocally stands against supremacy of any kind, and especially opposes acts of hate speech and the destruction of public art," the museum wrote in its own statement. "These recent incidents urgently demonstrate the continued need for museums to provide a forum for open dialogue and reflection, condemning hateful beliefs that continue to spread discrimination in our communities."

In her statement on Instagram, Moon wrote that Miami is often seen as a melting pot where "we don't have 'those problems'" of racism and supremacy. Artist Geovanna Gonzalez, Moon's partner, says the crime highlighted the harsh truth that Miami does in fact have those problems.

"We live in Miami, where we all live in this cultural bubble where situations like this don't happen," Gonzalez tells New Times. "And it was a harsh reality to see that at this is happening, and it happened to someone we're close to and who's impossible not to love."

Last Friday, Moon and the Bass held a memorial to honor the monument, where a crowd of about 30 friends, artists, and museum staff came to speak.

Gathered where the monument once stood, Moon called attendees to come to the microphone and share words, phrases, and "motherisms" they remember from their own moms so that the piece and its message would endure.

Others shared harsher ones: "¿Mija, porqué siempre es demasiado?" ("Girl, why are you always too much?")

In closing, Moon shared a new recording from her own mother — her thoughts on the vandalism and her words of encouragement.

"When Najja told me of the vandalism, I felt sadness, disappointment, hurt, anger, suspicion, and protectiveness. I've always taught my children to be their true authentic selves, they have nothing to be ashamed of," Moon's mother's voice spoke out over the speakers, as she closed with a mantra for Moon and for those listening after this crime: "You're beautiful, you're smart, you're talented, I've always known it, and now the world will know it."