Miami for Life: Locals Explain the Significance of Their Hometown Tattoos 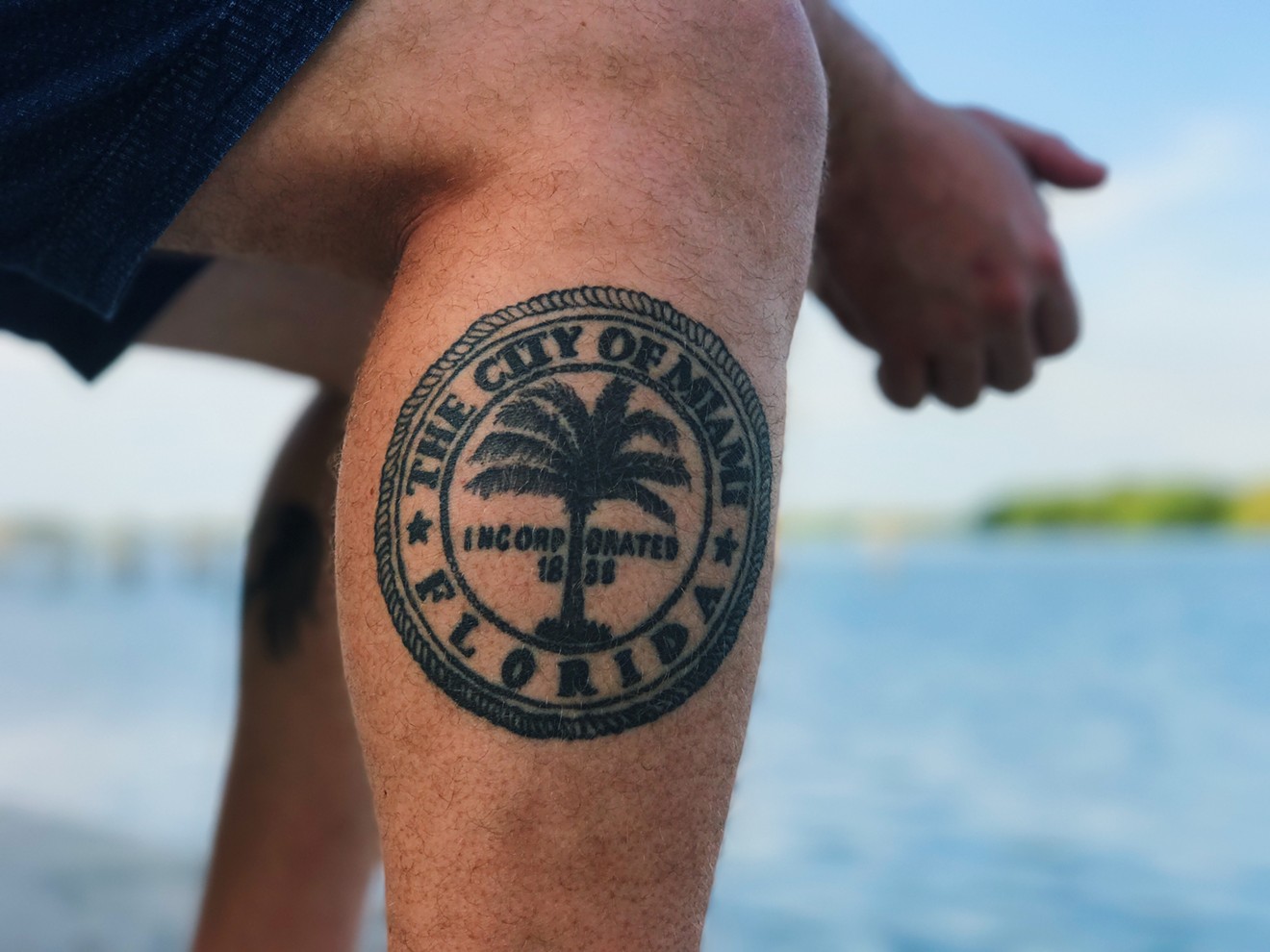 Miami is a place that stays with people, often in a very permanent way. Photo by Katie Lepri
Miami, whether it is your home or your favorite vacation destination, is a city that stays with you. It's the kind of place that becomes ingrained in you, in booty bass and neon, in on the sea breeze and cocaine in a dive bar, in downtown skyscrapers and South Beach pastels. And for many people, both those who were born here and those who bought a ticket to get here, it evokes the kind of feeling they want to be reminded of.

There are few better ways to immortalize a moment or a memory than with a tattoo. In the past decade, photographs have lost a bit of their magic in the era of Snapchat and the selfie, where pictures can be deleted and dismissed just as quickly as they are produced. But tattoos have remained a beautiful way to express a connection to something — or someplace — and keep it with you forever.

I have a little more than half a dozen tattoos — not as many as some people, but more than many others. The tattoo that consistently draws the most attention and garners the most comments and compliments is my tattoo of the seal of the City of Miami on my leg. And for me personally, that tattoo stands apart from the rest.

I got the tattoo a few days after my mother died in 2014. I was 24 and very suddenly adrift in a bad place. It was a much-needed pick-me-up when a friend of a friend came to do the piece in the apartment where I lived in Normandy Isles, but it was also something much more than that.

This tattoo is like a totem of my past, of the woman who raised me here, and of the city that has made me who I am today. It's an emblem that shows I am a part of this place and that this place is a part of me and that both of those things will always be true no matter where I go. 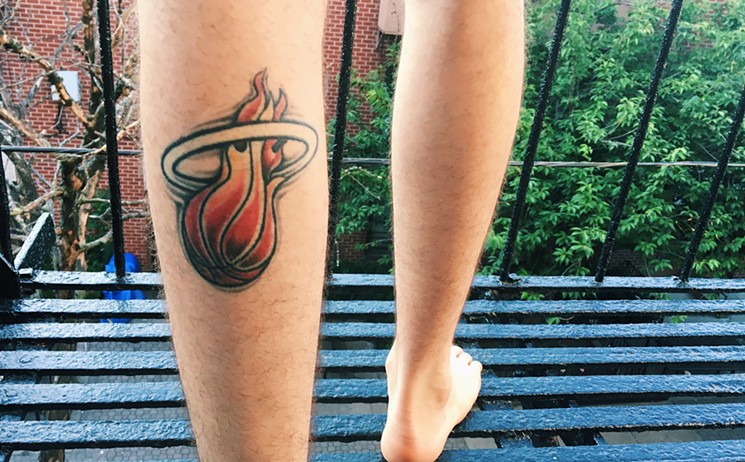 Nicolas Espinosa is pretty much the definition of a Heat Lifer.
Courtesy of Nicolas Espinosa
Getting a Miami tattoo can also be a way to commemorate it becoming your new home. For Nicolas Espinosa, who moved here from Paraná, Argentina, there was one image that perfectly summed up his relationship with his adopted city: the Miami Heat logo.

"I wanted to get something that really represented a big change from me living in Argentina to me living in Miami and starting my life again, and I was just eating and breathing anything Heat-related," Espinosa says. "I was really into the team, so I got something representing Miami and my moving to Miami, and I just thought, What better stamp than the team that I love and the city that I love all in one?"

Espinosa, who's half of Deaf Poets, the rock duo that started in Miami and recently moved to New York, says he always makes it a point to show his love for his city and his team, particularly when he's on the road.

"I try to represent Miami everywhere I can. Even when I tour and I play other cities, I take my Wade jersey with me. Especially if we’re in a city like Indianapolis or somewhere we had beef, I would just wear it around town," he says. "I’ll probably go and watch some games when the Heat come to the Barclays Center to play the Nets or the Knicks, and I’m gonna try and rep hard — I always try to, at least. This [tattoo] is like the ultimate rep machine." 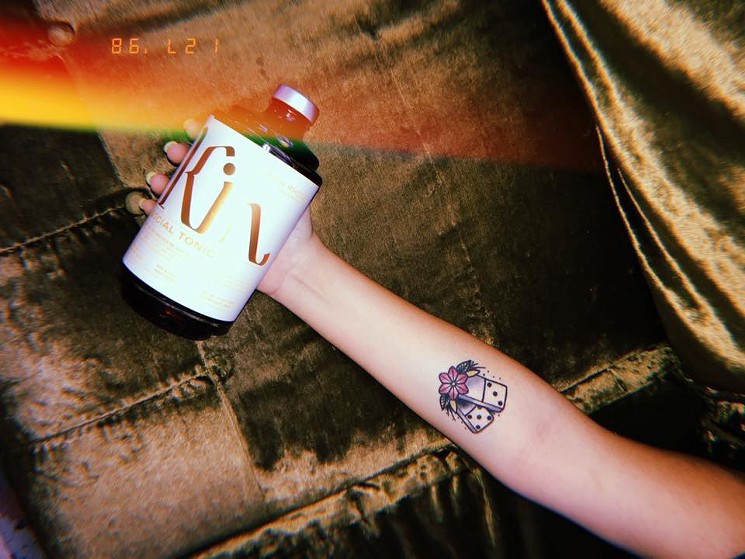 Amanda Suarez, like many Miami natives, will always remember listening to conversations around the domino table.
Photo by Vanessa Granda
Amanda Suarez, another Miami expat living in New York, got her tattoo representing the 305 in the form of dominoes after she moved away.

"When I left Miami, I suddenly craved everything that I associated with Dade County and growing up Cuban-American," Suarez says. "I spent almost every Friday night during my childhood in Hialeah watching in my family play-argue over a game of dominoes. That seemed like the best way to honor '305.' I like that now when I meet Miami natives in other states, they instantly know what's up when they see it on my arm." 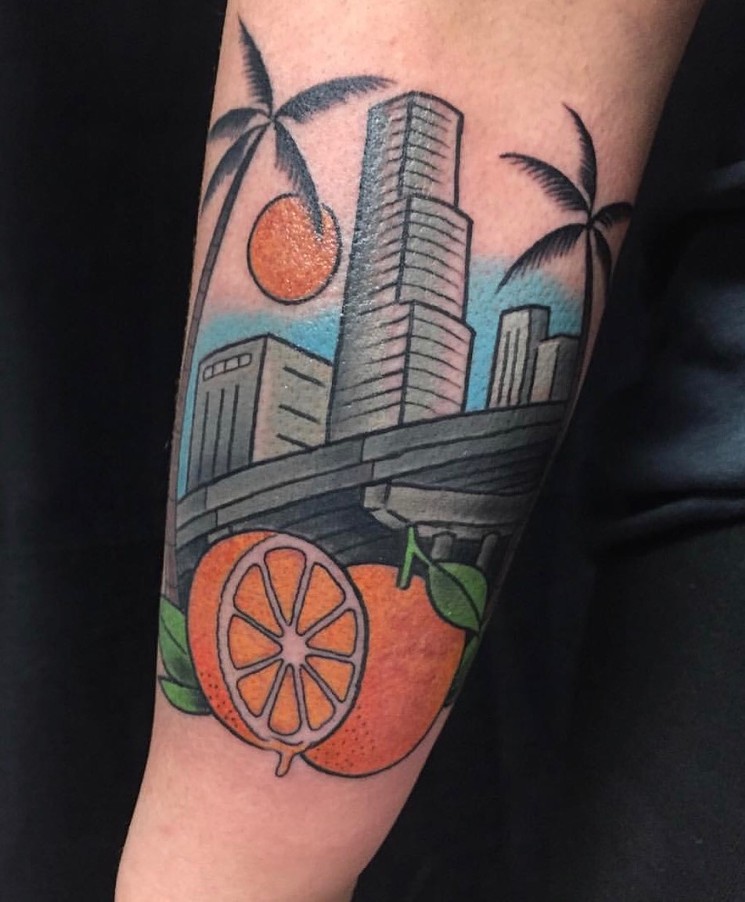 Eliana Agnello's tattoo of the Miami Tower is recognizable to just about anyone who's set foot in downtown.
Courtesy of John Vale
Eliana Agnello calls Miami home to this day. Raised in North Miami and North Bay Village, she now has a couple of hometown tattoos. The first, a cheeky interpretation of "305 till I die" as a pair of skeletal hands, was done in 2013. The second, inked last year at Ocho Placas, depicts a familiar snapshot of the city's skyline.

"When I got the tattoo, it wasn’t planned. I came to see John [Vale] for something new and wasn’t really sure what I wanted," Agnello says. "When I came across that Miami image, I immediately asked him if anyone else had gotten it. I was in shock that no one had it yet and had to make it mine. I spend a lot of time in downtown and driving on 95. I used to commute to Center every day when I was in high school, so all the elements were there. It felt like home."

Agnello, who travels often, says that, of all her tattoos, these two Miami pieces are extra-special. She really loves her city, and the tattoos feel like tokens of that love.

"I am very proud of it," she says of her skyline ink. "It feels like everywhere I go, someone notices it and asks me if it’s Miami and if I’m from there. It’s a really special feeling to know that home is such an iconic place that strangers recognize it in tattoos.

"Most people associate Miami with the beach and art deco and neon. The fact that my tattoo doesn’t have any of that going on and people still recognize it to be Miami is dope." 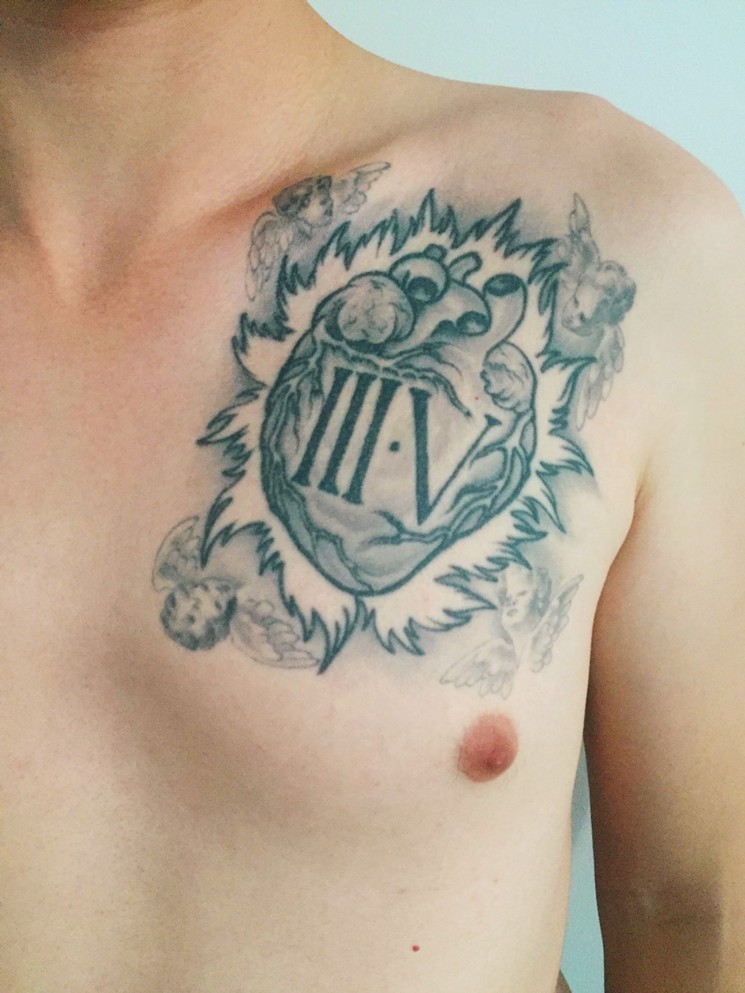 Whether or not Julien Pujol ever returns to Miami, the city that raised him will be with him forever.
Courtesy of Julien Pujol
Julien Pujol is one of my oldest friends, but we haven't lived in the same city or even on the same continent in more than ten years. After graduating from high school early, he took a year off to visit his father in Switzerland, where Julien was born. It's also where he got his tattoo of the 305 emblazoned across his heart.

"I got it right before I left to Paris," Pujol says. "It was definitely my lowest point, in a way, because I had been living in Schiers in Switzerland and I had gone through a breakup and I felt not so hot. Also, it was after I knew that I wasn’t gonna be able to go back to the States... Then I kind of knew that, you know, that’s it... that my life was definitely going to change to something else."

In addition to enduring heartache and immigration woes, Pujol had also been denied entry to university in Switzerland and lost his Swiss job when the company he worked for folded. Plus, it was the middle of winter in the Alps. If you've grown up in Miami's so-called winters, the prospect of facing the cold and darkness can be pretty depressing.

"It was kind of a way to get some light back and remember where I’m from, remember my friends and my family," Pujol says. "It was just sort of a way to be anchored to the past, and that’s always really important to have that anchor."

A lot has changed for Pujol over the past ten years. He's married now and spends his time between his wife's home country of Estonia and their home in Paris, where he works as a filmmaker for fashion houses such as Hermès, Lacoste, and Louis Vuitton. He doesn't go around shouting "305 till I die" nowadays, but he says the Magic City is a part of his life that he's glad he has a reminder of.

"I’m not that person anymore," Pujol says, "but that tattoo is like a little part of me from before, and it’s really important to hold onto and to have it there. It’s pride; it’s a prideful moment. I went to Miami — my life was there, and I was taken from there, literally. So that tattoo is like a note for your future self to say, This is who I am now, and remember me; remember who I was."

The saying goes "You can never go home again," and perhaps that's true. People change, things change, places change, and neither you nor this city will be quite the same as you are now for very long. But with a little ink, a bit of blood, and a steady hand, you can take a piece of it with you and, for the rest of your life, remember your city and yourself as they once were. Happy National Tattoo Day.
KEEP MIAMI NEW TIMES FREE... Since we started Miami New Times, it has been defined as the free, independent voice of Miami, and we'd like to keep it that way. With local media under siege, it's more important than ever for us to rally support behind funding our local journalism. You can help by participating in our "I Support" program, allowing us to keep offering readers access to our incisive coverage of local news, food and culture with no paywalls.
Make a one-time donation today for as little as $1.