Oolite's 2022 Ellies Winners Are All Over Miami Art Week

The 2022 Ellies winners Photo by WorldRedEye/courtesy of Oolite Arts
In October, local arts nonprofit Oolite Arts announced the winners of this year's Ellies. Forty-five winners, a mix of South Florida-based artists and K-12 art teachers, were announced and given a piece of the $500,000 funding. For the average art lover, it also serves as a good chance to see what the local scene is up to and who's emerging from South Florida's swampy talent pool.

Because the Ellies were awarded barely a month ago, you won't see any of the projects that were pitched fully realized during this year's Miami Art Week. However, if you want a sneak peek of what you can expect, this is the time to go out and explore, as several of the winners have work on display throughout the week.

The work of Amanda Linares is part of a group exhibition at the Liberty City artist-run space the Collective 62. Organized by independent curator Luna Goldberg, "Time flies like an arrow; fruit flies like a banana" takes its title from comedian Groucho Marx and analyzes the impermanence of domesticity and homey objects as elements of the home as a seemingly invisible working environment. Linares' work explores narratives and space through the use of reflection, transparency, revelation, found objects, and typographical solutions, and is sure to meld perfectly into an exhibition that will trace time's passing through its impact on the body, one's space, and material possessions we can't seem to let go of in our lives. On view through January 15, 2023, at the Collective 62, 901 NW 62nd St., Miami. 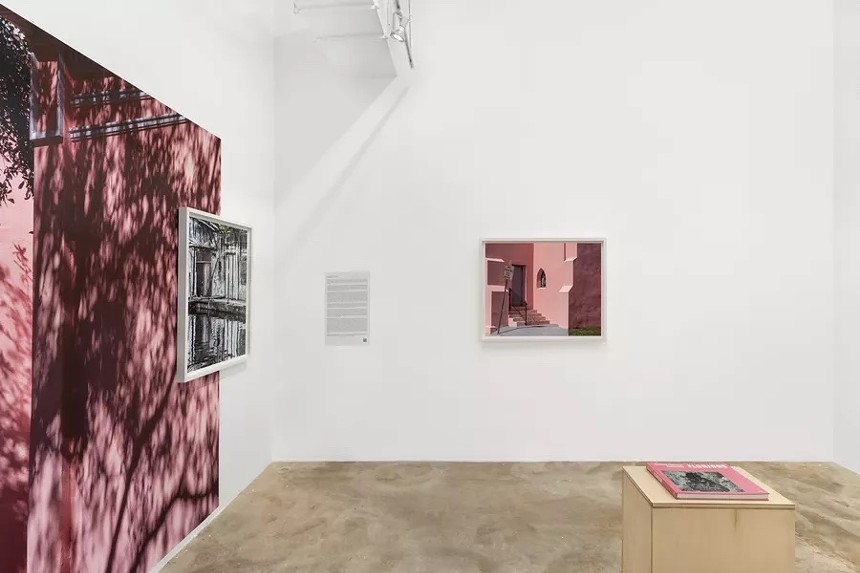 Complimenting the pretty-in-pink photo book by the artist, "Floridas" by Anastasia Samoylova engages its visitors in the active documentary project by the photographer in exploring the Floridian landscape through its aghast headline-making and misunderstood nature. Samoylova road trips through the state in conversation with Walker Evans, the American photographer who documented the state between the 1930s and the 1970s, with the exhibition blowing up to life-size scale the color and monochrome images featured in the book. Surrounded on all ends by Floridian confines, the photographer's showcase at the Little River Gallery is sure to provide an immersive experience. On view through January 20, 2023, at Dot Fiftyone Gallery, 7275 NE Fourth Ave. #101, Miami.

For the third edition of "No Vacancy" — a juried art competition run by the City of Miami Beach, in collaboration with the Miami Beach Visitor and Convention Authority that encourages the public to experience the city's famed hotels as temporary art destinations in their own right — the largest cohort to date of 12 artists features the married duo Antonia Wright and Ruben Millares' continuing conceptual series in which they explore the right and resistance to protest through the use of LED lights atop steel barricades. As opposed to the lone barricade that has traveled throughout exhibitions and public art in Miami, Wright and Millares bring in a nuanced stacked attempt for "Patria y Vida" to engage visitors with the installation. Take a trip to Miami Beach and include this in one of your many stops of the fleeting onsite artist activations, especially if you've got a home-court advantage and don't normally traverse the hotels off the mainland. On view through December 8 at Faena Hotel Miami Beach, 3201 Collins Ave., Miami Beach.

Despite its seeming proximity to Miami-Dade County, Broward as a destination to reach during Miami Art Week might seem absurd and contradictory. The closeness of cities like Hollywood to Miami is a justifiable reason to veer out of the traffic pumping straight into the 305 highways and go against the grain towards the 954. Opened in October 2022, Carolina Cueva's solo exhibition at Art and Culture Center / Hollywood, "The memory that transforms into a place," is directly in partnership with Oolite Arts and curated independently by Risa Puleo. An Indigenous artist who practices an understanding of her ancestral heritage through Andean cosmology and by way of interdisciplinary mediums, Cueva's solo exhibition is one to place with certainty on an endless list of exhibitions that honor Native women in the scope of art and teach one to process the roots of one's blood. On view through February 5, 2023, at Art and Culture Center / Hollywood, 1650 Harrison St., Hollywood. 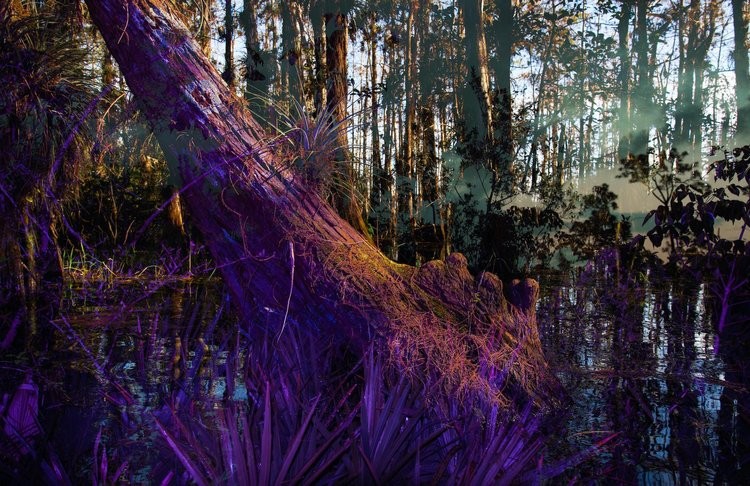 Created by Tulloch following a residency with the Artists in Everglades Program (AIRIE), "Passages" is a site-specific, immersive installation bringing the Everglades to Miami Art Week during AIRIE's annual summit that recaps the artists in residence. The installation takes visitors through the River of Grass at the strike of sunset and gradually transforms through the mood of twilight. "Passages" conceptually ties together the themes and striking modes of thought that 2022 AIRIE fellows found during their stay in the swampy environment and the programming provided by the residency. Both an artist in residence and the spearhead of the installation, Tulloch will invite numerous artists to provide poetry, song, and visual works in connection with their time spent in the residency. Noon to 4 p.m. Saturday, December 3, and Sunday, December 4, at the Carter Project, 3333 NW Sixth Ave., Miami.

One-third of the Comedor Azul Collective, which centers on communal food-making and dining removed from colonialized tradition, Gomez-Gonzalez's individual practice can be found on view at Edge Zones Gallery in the group show "Far Away Yet So Close (Muy Lejos Pero Tan Cerca)." On view through December 7, the group exhibition focuses on artists from the Dominican Republic and its diaspora and is curated by long-standing artist Charo Oquet. Gomez-Gonzalez's work utilizes the artist's body to analyze the cyclicality of routine, pattern, and daily life. The artist is just one of many in conversation with each other over a shared ancestry and ties to the Caribbean nation. On view through December 7 at Edge Zones Gallery, 3317 NW Seventh Ave. Cir., Miami. T. Eliott Mansa, section of wallpaper from "Room for the living/Room for the dead"
cPhoto byourtesy of Locust Projects and the artist

The ever-engaging and tragically relevant sculpture work of Mansa will now be on view as one of the last project room activations at Locust Projects' current Design District gallery. Named literally after the concept of the activation, "Room for the living / Room for the dead" references sunken living rooms commonly found in homes during the 1970s. As opposed to being primarily occupied by the living, Mansa reworks these communal gathering spaces as places to mourn and grieve collectively for the dead. The installation features a new iteration of Mansa's thematic thread of honoring the lives of those tragically lost and keeping their memory alive through open invitations to convene together as a community tied together by calamity, wishing to pay homage through storytelling and the ability to be physically present in a space. On view through February 4, 2023, at Locust Projects, 3854 N. Miami Ave., Miami.

Winning an Ellies Award for a series of large-format paintings that explore the mass exodus of Cubans out of the island following the July 2021 protests and ensuing muffles to freedom, Osorio's continual investigation of his own Cuban identity is now on view in the collective exhibition of Cuban art found in Miami real-estate developer and philanthropist Jorge M. Pérez's private collection at El Espacio 23. Part of the exhibition "You Know Who You Are," The Face of Leviathan is the largest work to date by the artist, who juxtaposes traditional portraiture next to abstract, three-dimensional elements, such as oil paint layered and spackled on the canvas. Heavily inspired by philosophy and literature, the Bakehouse Art Complex artist-in-residence is just one of the numerous Cuban artists now in the permanent hands of the Pérez collection. On view through 2023 at El Espacio 23, 2270 NW 23rd St., Miami.
KEEP MIAMI NEW TIMES FREE... Since we started Miami New Times, it has been defined as the free, independent voice of Miami, and we'd like to keep it that way. With local media under siege, it's more important than ever for us to rally support behind funding our local journalism. You can help by participating in our "I Support" program, allowing us to keep offering readers access to our incisive coverage of local news, food and culture with no paywalls.
Make a one-time donation today for as little as $1.