Nine Galleries to Check Out During Miami Art Week 2020

Jared McGriff, Hoover's Son Courtesy of Spinello Projects
Despite what it may look like, with the cancellation of an in-person Art Basel and much of Miami Art Week’s traditional fanfare sitting this year out, art galleries have been busy putting together major exhibitions. The work they feature speaks to the anxieties, pain, confusion, and reflection of our current moment. While it may not give you all the answers, it’s sure to give you lots to think about, and might even help you feel less alone.

Here are nine galleries you won’t want to miss as you make your (socially distanced) Miami Art Week rounds.

David Castillo debuts "Chapel Paintings," a new exhibition of work by Florida-born artist Vaughn Spann, who has become a name to watch in the contemporary art world in recent years. His work can now be found in the permanent collections of institutions such as the Peréz Art Museum Miami and the Rubell Museum, and images like his Marked Man series of paintings featuring large Xs are instantly recognizable and striking. Spann incorporates bright colors and lots of texture into his works, which often explore the relationships between art, activism, and social practices. Through January 31, 2021, at 3930 NE Second Ave., Suite 201, Miami; 305-573-8110; davidcastillogallery.com.

Frances Trombly, "All This Time"
Photo by Francesco Casale

For "All This Time," Frances Trombly’s exhibit of new works at Emerson Dorsch, the artist was inspired by the realization that, while the colors and textures of draped fabrics have played an important role in Western art history, appearing in countless paintings and sculptures, the people who made these textiles are typically unknown. She framed fabrics dyed in red, blue, and yellow, and hung them on the wall just as stately paintings would be. Trombly is not interested in perfection and left glitches intact as she worked on the loom. Instead, she found beauty in the act of making itself, and in its essential components of draping, dyeing, spinning, and weaving. Through January 16, 2021, at 5900 NW Second Ave., Miami; 305-576-1278; emersondorsch.com.

The contemporary art gallery, which focuses on Miami-based artists, presents "For Those Gathered in the Wind," a solo exhibition by the multidisciplinary artist T. Eliott Mansa, whose assemblages explore Black grief and examine the ways in which humans mourn. In mourning those who have lost their lives to state and extrajudicial violence, the artist looks to practices and traditions from Africa and its diaspora to the American West and incorporates items used in grassroots memorials, such as teddy bears, plastic flowers, and offertory candles. Proceeds from the catalog sale will go to the initiative for the planned Miami Museum of Contemporary Art of the African diaspora. Through February 9, 2021, at 2610 SW 28th Ln., Miami; 305-987-5642; lnsgallery.com.

Mindy Solomon kicks off the season with two brand-new shows. A solo exhibit featuring the work of painter Nadia Waheed, "I climb, I backtrack, I float," has been in development for over a year and makes its debut just in time for Art Week. Colorful images of mountaintops, lush green forests, flowing water, and seas of lily pads serve as allegories, providing a window into the artist’s internal narrative and state of mind during this tumultuous year. Meanwhile, the virtual exhibition "Lover’s Rock," designed by artist Asif Hoque and curator Ché Morales, places the viewer inside a landscape crafted with inspiration from Hoque’s home state of Florida, his home country of Bangladesh, and the Italy of his childhood upbringing. The virtual reality exhibit tells the story of two lovers and how they find their way to one another with the help of mystic spirit guides. Hoque’s paintings are embedded throughout the landscape of the virtual world and are also on view by appointment at the gallery.
Through January 16, 2021, at 8397 NE Second Ave., Miami; 786-953-6917; mindysolomon.com.

At Nina Johnson, three solo exhibitions take on the emotional landscape of 2020, with all the loneliness, anxiety, political drama, and strange moments of humor it encompasses. When artist Nathlie Provosty had COVID-19, she lost her sense of smell and had vivid dreams of dragons, leading her to begin drawing them. She calls her newest paintings, collected in the exhibit "Poison Dart," "therapeutic venom for facing dragons," drawing inspiration from the biology of poison-dart frogs and the notion that vivid colors that can repel predators. In "Fredonia!" painter Rochelle Feinstein pokes fun at the traditional motif of the rainbow and takes it apart to create abstract images of graphs, charts, and — in one red-and-blue series — Election Day data. And Miami-born Woody De Othello’s "Coming to Light" digs into the way it feels to live in our current reality, with his paintings and ceramic vessels taking the form of contorted human figures forced to confront themselves. "Fredonia!" runs through January 9, 2021, "Poison Dart" and "Coming to Light" run through January 30, 2021, at 6315 NW Second Ave., Miami; 305-571-2288; ninajohnson.com.

While not exactly a traditional gallery, Oolite Arts’ pop-up exhibition and art sale on Lincoln Road, "Materialize," is one of the best places to discover the work of Miami artists — and maybe even support their work and buy a piece or two for yourself at an affordable price. Taking over a vacant space on Miami’s busy shopping street, the exhibit is filled with pieces that can decorate a home or be worn on the body. It also invites visitors to experience some of the process and craftsmanship of making this work, while getting to know local artists. Works will range from photographs, prints, zines, and books to clothing, jewelry, and facemasks, by artists including Terence Price II, Pepe Mar, and Rosa Naday Garmendia. Through Sunday, December 6, at 928 Lincoln Rd., Miami Beach; 305-674-8278; oolitearts.org/materialize.

Wade Tullier, Owl with fruit and tree
Courtesy of Primary

For his collection of new sculptures and paintings at Primary, "Hear Say," Detroit-based ceramicist Wade Tullier was inspired by storytelling and oral-history traditions. By using repetition in his work, he mimics the way stories are told and retold, changing their meaning and transforming over time as they’re passed down through generations. As for what those stories are about, the Louisiana native draws much of his imagery from the history of natural disasters and manmade catastrophes his homeland has faced, as well as its native wildlife.
Through, January 30, 2021, at 15 NE 39th St., Miami; thisisprimary.com. 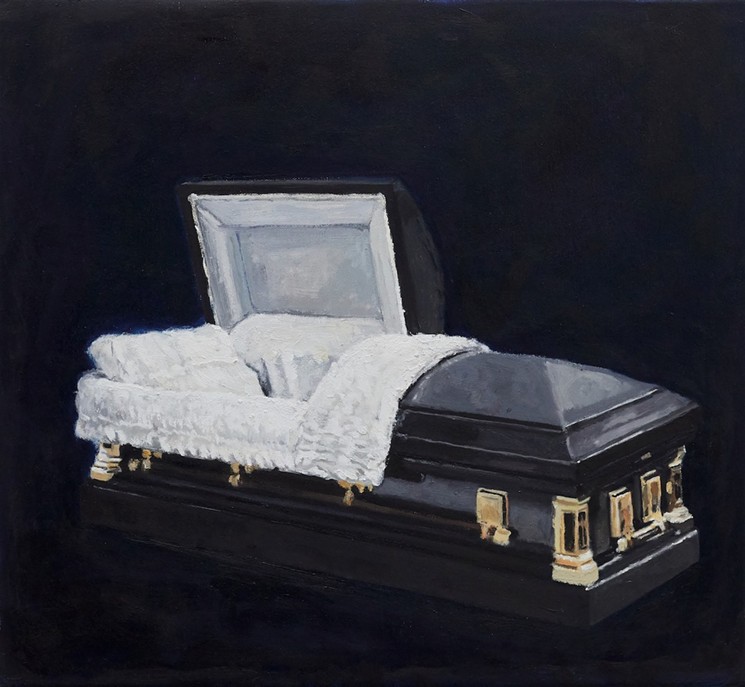 Local artists of color take center stage in Spinello Projects’ three new exhibits. In his solo show, "At the Feet of Mountains," the Miami-born artist Reginald O’Neal presents a series of small to large-scale oil paintings inspired by his personal experiences and observations of life around him, ranging from a poignant still-life of his grandmother’s eyeglasses to a view of Overtown, where he’s lived for his whole life. Jared McGriff, in his solo exhibit "Only Touching the Ground to Jump," also uses the medium of oil painting as he explores the ways individuals interact with (and are affected by) the larger systems and environments they are part of. Meanwhile, The Annex, Spinello’s experimental platform dedicated to nurturing up-and-coming Miami artists and curators, presents "Imagine: An Anthology of Black Thoughts," a collection of video works by local Black artists, curated by Octavia Yearwood. Through January 18, 2021, at 2930 NW Seventh Ave., Miami; 646-780-9265; spinelloprojects.com.

Located in Miami’s historic Overtown, Ward Rooming House will feature Hampton Art Lovers’ Point Comfort Art Fair + Show. This year’s show will feature the photography of Dennis Manuel in "Dennis Manuel: The Eye of Afropunk." A recognized documenter of the New York music scene, Manuel has captured Black performance art with his camera for 20 years. Known as the official photographer of the annual Afropunk Festival, he’s followed the festival since it debuted at the Brooklyn Academy of Music in 2005 and as it's grown to become the home for Black creativity and self-expression, and the movement for social change, that it is today. The exhibit will include projections of the photographs on the outside the gallery, and on screens in the building’s interior garden, so that much of the work will be visible from outside. Through Saturday, December 5, at 249 NW Ninth St., Miami; hamptonartlovers.com.
KEEP MIAMI NEW TIMES FREE... Since we started Miami New Times, it has been defined as the free, independent voice of Miami, and we'd like to keep it that way. With local media under siege, it's more important than ever for us to rally support behind funding our local journalism. You can help by participating in our "I Support" program, allowing us to keep offering readers access to our incisive coverage of local news, food and culture with no paywalls.
Make a one-time donation today for as little as $1.