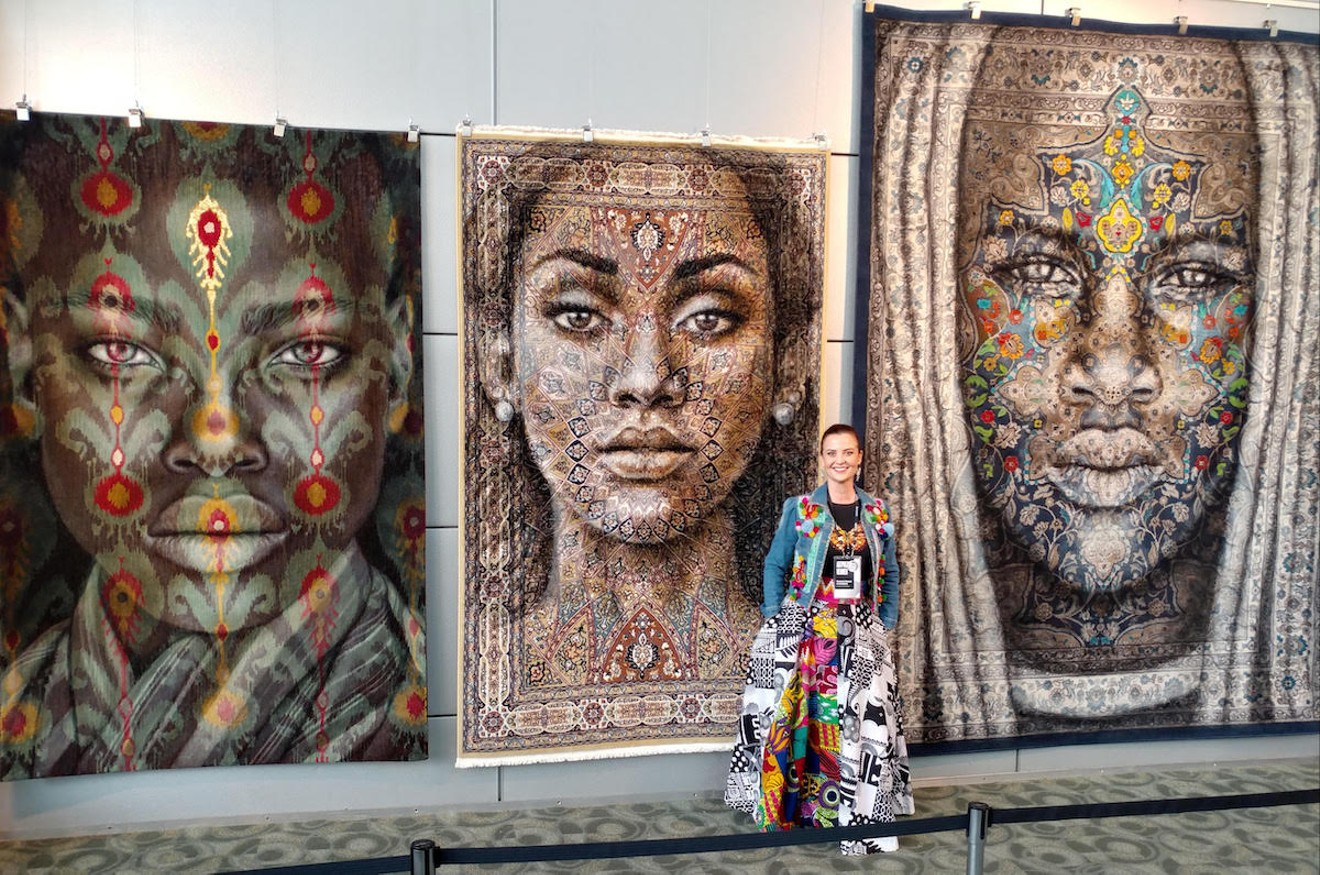 Shortly after, she found out her ex-husband had seven children with three different women and eight grandchildren — and he was still legally married to someone else. She spent that Valentine's Day wretched until she started receiving hundreds of Facebook messages and more than 1,000 friend requests.

"A month earlier, I posted my mixed-media portrait of Michelle [Obama]," Clement de Grandprey tells New Times. "That day, the Obama's revealed their official Smithsonian portraits to the world, and thousands of people went back to my Michelle post. They were now reaching out, sending beautiful messages, and I wanted to continue to share art."

Her mixed-media painting of the former first lady received more than 78,000 likes and 57,000 shares. She also gained 4,000 followers that day and over a thousand comments.

"I felt like I got noticed," she says. "That was the year the stuff was happening with my ex, but the universe was looking out for me. I got one no but received 78,000 yeses. I didn't let a negative moment stop me, and I chose what story to associate that day with."

Born and raised in southern Spain, Clement de Grandprey is the daughter of an American mother and a French-Italian father. The now-50-year-old worked as a tour guide in Spain, an English tutor in Italy, and an airline pilot in the United Kingdom. After 9/11, she was let go of her job and found herself living and working in Fort Lauderdale, where she worked as an interior designer.

"I moved here in 2004," Clement de Grandprey says. "But the reason I stayed is because I found a job, and I really didn't have too much to go back to in Spain."

In 2014, she quit her full-time job as a project manager to pursue her real passion: painting.

"I've always loved drawing and painting," she says. "When I was 5, I did my first oil painting of a house with a blond mother carrying a laundry basket. It was super detailed, and I still have that picture. I feel like painting has always been a part of my life."

"Wisdom of Love"
Photo courtesy of Florencia Clement de Grandprey
When Clement de Grandprey enrolled in university, she was dissuaded from attending art school and was instead encouraged to study something "useful" that would lead to a real "real job."

Even though she lacks formal training, Clement de Grandprey believes it has led her to develop a style without rules, giving her creative freedom and combining her love of the classic masters with contemporary design flair to produce mixed-media paintings.

She initially set out to paint on canvases and incorporate upcycled and repurposed materials that would have been disposed of, such as discontinued fabric and paper samples, to create backgrounds and layer her subjects. Now, she paints directly on upholstery fabric and area rugs and has a variety of mixed-media styles. The fabric patterns intertwine with the imagery, adding yet another dimension to her work. Ultimately, though, Clement de Grandprey's goal with her artwork is to showcase men and women as inspiring, strong, and elegant figures.

"When I paint, it's like therapy for me, and I know it can be like therapy for others," she explains. "I want to represent as many ethnicities and cultures as possible because I really feel like it's important that everyone can see themselves in it and not just have it be one certain group. It's for everyone really and inclusive."

One of Clement de Grandprey's most well-regarded works is "Wisdom of Love."

"That's the one that looks like Jesus," Clement de Grandprey says. "It came out during the time of the pandemic, and people wanted wisdom when we were falling into the fear of the pandemic. It's about more than a pretty picture, and the artwork has messages and meaning that people can connect to."

Clement de Grandprey's style has evolved over the years as she continuously explores surfaces and materials. Her largest piece is 11 feet by eight feet, and each one can take about a month to complete.

"I like painting on the rugs because it's about looking beyond the surface," she explains. "It reminds us to look out and see all the beauty in the world," Clement de Grandprey adds. "And that there are as many points of view as there are eyes and the rug that will be in the middle is about introspection and reminding us also to look within."

Even without any art schooling, Clement de Grandprey has racked up several accolades, including the "Latino Award" for the 2021 edition of ArtPrize. She was chosen as the Miami representative for the Bombay Sapphire Artisan Series contest on display at Scope Art Show during Miami Art Week.

Clement de Grandprey's work has also been exhibited around the world, in places like Australia, United Arab Emirates, Spain, and England. And locally, she's participated in the Las Olas Art Fair and had a solo exhibition at Bailey Contemporary Arts Center in Pompano Beach.

"I want the message to be spread to as many people and places as possible," Clement de Grandprey says. "The message on positivity and that a good change can come."
KEEP MIAMI NEW TIMES FREE... Since we started Miami New Times, it has been defined as the free, independent voice of Miami, and we'd like to keep it that way. With local media under siege, it's more important than ever for us to rally support behind funding our local journalism. You can help by participating in our "I Support" program, allowing us to keep offering readers access to our incisive coverage of local news, food and culture with no paywalls.
Make a one-time donation today for as little as $1.