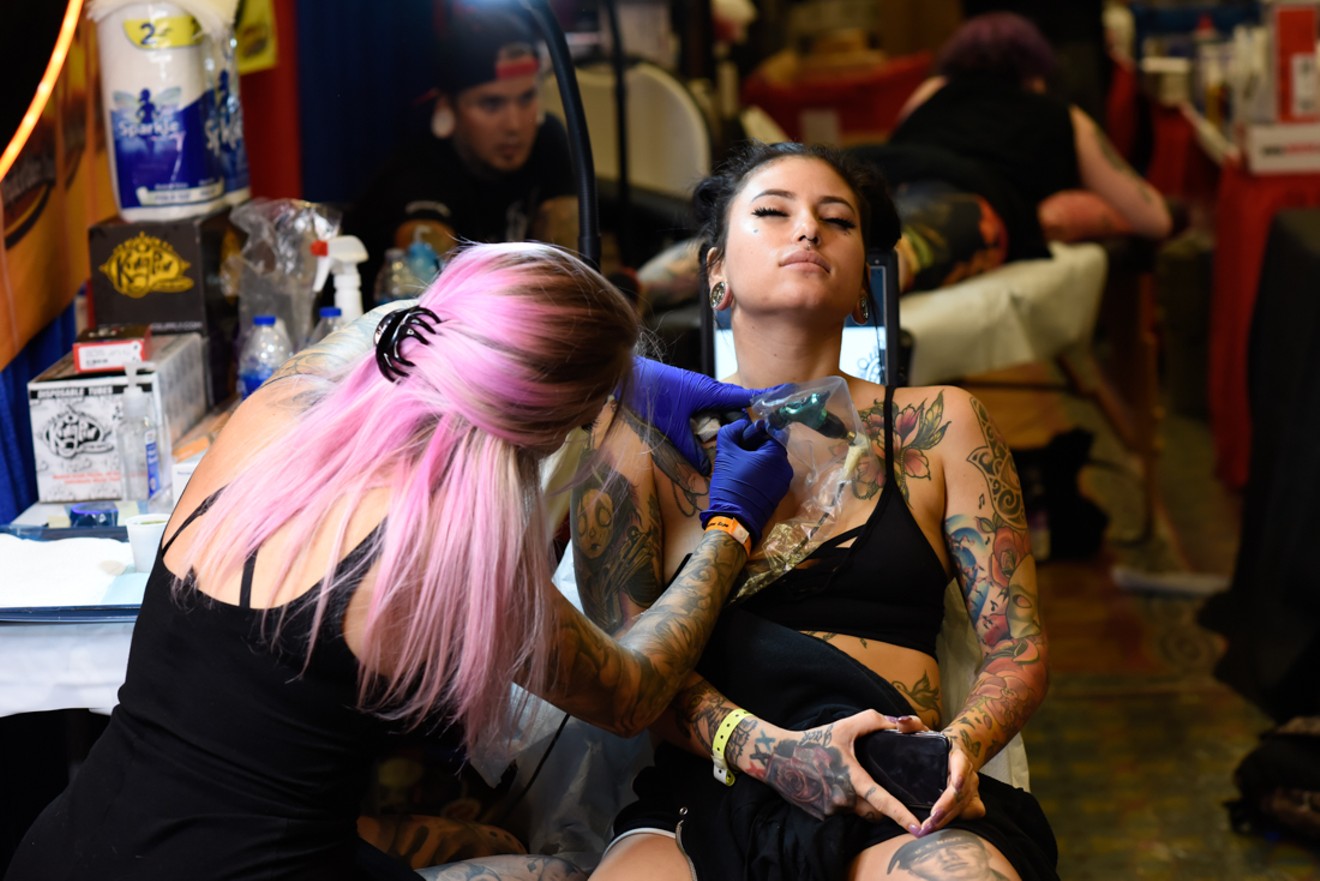 Remember what it was like to get a professional tattoo? Michele Eve Sandberg
For more than two months, Briga, a 30-year-old tattoo artist, has been sitting at home, anxiously waiting for the Coconut Grove tattoo parlor where she works to reopen. On March 15, five days before Miami-Dade Mayor Carlos Giménez shut down all nonessential businesses to slow down the spread of COVID-19, her boss at Grove Ink Tattoo closed the shop out of an abundance of caution.

So Briga — as she is known to her clientele and colleagues — was hoping tattoo parlors would have been included in the current phase of reopenings in Miami-Dade and the rest of Florida. But the ink master and her community of 10,000-plus tattoo artists across the state remain on the sidelines. Consumers can avail themselves of body-enhancement procedures such as drive-thru Botox injections, but sitting for a tattoo session remains a no-go for now. And the local tattoo industry can't seem to get any answers from county and state officials about why cosmetic-surgery centers can resume operations but tattoo shops aren't allowed to.

"The current order allows nail salons, barbershops, and medical offices that perform elective surgeries [to reopen]," Briga says. "Tattooing is somewhere in between those, yet we are left in the dust. A number of people have been speaking out on social media and have tried calling and emailing Gov. Ron DeSantis, but at a recent press conference, he just waved off a reporter's questions about it."

As it stands, tattoo shops are lumped in with gyms, fitness centers, entertainment venues, and massage parlors as nonessential businesses that must remain closed.

"It's still a state-mandated closure," a Giménez spokesperson clarifies when reached by New Times. "Miami-Dade County cannot allow tattoo shops to reopen until it's allowed by the state."

Then again, officials in Pinellas and Hernando counties on the west coast of Florida are allowing tattoo parlors to reopen based on their interpretations of the 35 pages of unofficial recommendations issued by the governor's Task Force to Reopen Florida. According to a May 21 story in the Tampa Bay Times, authorities have allowed four shops operated by a local tattoo-parlor chain to reopen, despite having received complaints to shut them down.

DeSantis' press office did not respond to multiple requests for comment via email.

Some tattoo-shop owners argue that excluding them from the reopening is unfair, given that the state appears to consider tattoo shops to be part of the "Personal Care Industry," which also includes barbershops and nail salons). Additionally, tattoo parlors, are subject to stringent regulations similar to those imposed on medical offices. In order to be licensed annually in Florida, tattooers must train to handle biohazardous waste and cross-contamination. Shops also require them to wear personal protective equipment including masks, eyewear, and gloves, and provide them with single-use, sterilized needles, among other sanitation measures.

Chico Cortez, the owner of two Miami-area shops under the Chico's Marked 4 Life banner, says cosmetic surgeries such as breast augmentations and tummy tucks are as nonessential as tattooing.

"The fact is, we are licensed in handling blood-borne pathogens and are certified by the Florida Department of Health," Cortez says. "I don't think it's wrong that those places are reopening, but it's insulting that we can't, with all the certification we have and protective equipment we use."

The 51-year-old entrepreneur, who is also a tattoo artist, employs 20 people who have not returned to work since March 16.

"We voluntarily closed our shops," Cortez says. "No one knew how serious this was going to get, but I have a 4-year-old and an 84-year-old in my house. I wasn't going to take a chance with those two lives."

Jose Rosado, the owner of Black Tie Tattoo Parlor in the Kendall Hammocks area of Miami-Dade, says he and his wife have been forced to dip into their savings to pay their shop's bills.

"It was a big hit for us not to be included in the first phase," Rosado says. "My wife runs the shop. This is how we make a living. It's not like we have side jobs."

Rosado says his landlord has rejected his requests for rent relief. And he worries business won't pick up once his shop is allowed to reopen.

"If we need to ride this out another three to four weeks, then we will be in real trouble," he says. "There is always that fear of what happens if we are really slow for a month or two. That is a big variable that we don't know the answer to. It's very stressful."
KEEP MIAMI NEW TIMES FREE... Since we started Miami New Times, it has been defined as the free, independent voice of Miami, and we'd like to keep it that way. With local media under siege, it's more important than ever for us to rally support behind funding our local journalism. You can help by participating in our "I Support" program, allowing us to keep offering readers access to our incisive coverage of local news, food and culture with no paywalls.
Make a one-time donation today for as little as $1.