Foster Pets Are the Perfect Companions for Our Social Distancing

Lilo is available for adoption at Miami-Dade Animal Services. Photo by John Bouma
As the coronavirus crisis keeps more and more people confined to their homes, the news often feels increasingly grim. But one silver lining has emerged from the number of people working from home: Many of them are deciding to foster shelter pets in need.

"We've seen a ton of people interested in fostering — I think because they're staying home, they suddenly find themselves with more time," says Noel Gonzalez, a social media specialist at Miami-Dade Animal Services (MDAS) in Doral. "And I think people just want to help — it's uncertain times, and they're thinking about ways they can make an impact in the community. Fostering a pet is something you can do at home."

While the shelter has seen a small bump in adoptions over the past few weeks, the number of foster applications has significantly increased. The week of March 9, 44 pets went to foster homes. The following week, that number had more than doubled, to 104.

Patricia Lara, founder of Wonder Paws Rescue, a nonprofit based in Fort Lauderdale that provides medical care, temporary housing, and rehabilitation for neglected dogs and cats, has also seen an increase in applications.

"In one week, we would normally get one foster application. Right now we're getting around 15," Lara reports.

Because Wonder Paws doesn't have a facility of its own, it relies on fosters to provide a safe, loving place while pets await adoption. Otherwise, the animals are boarded at one of the nonprofit's animal-hospital partners.

Caring for a pet offers benefits for humans too.

"Pets absolutely provide companionship, especially in times like these," Gonzalez says. "They can give people a sense of purpose, and they provide love. So we do feel like now is a really good time to foster or adopt."

Ellie Mae waits to adopted from Wonder Paws.
Photo by Kim Feeley McBride
MDAS is open daily from 10 a.m. to 4 p.m. (the hours are limited to allow for increased sanitation), but the fostering process is as virtual as possible to abide by social-distancing guidelines. Those who seek to foster can apply by email. The office will schedule a one-on-one appointment; after a brief orientation, you choose your pet, learn about any specific needs it might have, and receive supplies such as food, bowls, dog leashes, or cat litter to take home. The shelter also offers a virtual adoption program that allows you to meet your potential pet online via Skype and set up an appointment to pick it up.

At Wonder Paws, prospective fosters fill out an online application and agree to a FaceTime visit to ensure their home is safe for a dog or cat. Approved fosters are invited to join a Facebook group where they're matched with the pet best suited to them.

If fostering isn't an option for you, there are other ways to help. MDAS and Wonder Paws have Amazon wish lists and also accept general donations. Wonder Paws often rescues animals that require serious medical attention, so your donation might go toward a vaccination or life-saving surgery. If you're doing some spring cleaning, you might consider donating old towels or gently used leashes and harnesses you no longer need.

“Pets absolutely provide companionship, especially in times like these.”


In early spring, Wonder Paws typically takes in many puppies and kittens. "What's coming in is a lot of nursing moms, a lot of abandoned babies," Lara says.

She also worries about how the economic fallout from the pandemic might affect pet owners' ability to care for their animals. "This will have an impact, I think economically, on people who have pets," Lara says. "They'll no longer want them, they can't afford them — and we haven't seen it right now, but if this continues, we will see a huge impact in the next week or so when people don't have any money and can't buy food."

Toward the beginning of the crisis, Lara rescued a litter of four puppies that had been abandoned in a parking lot. "At times like these, there are people getting rid of their animals, and they will end up at the shelter or on the street, and so we try to help as much as we can, especially now that we have all these puppy fosters waiting," she says.

MDAS hasn't seen an increase in intakes so far, but Gonzalez believes it's coming. In the meantime, the shelter is proactively encouraging owners not to surrender a pet unless it's absolutely necessary. 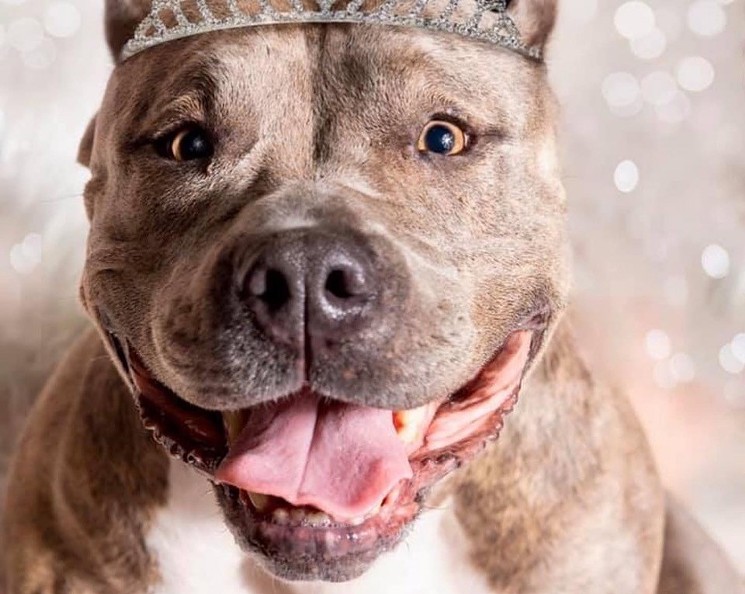 Cozy up to Mabel during the quarantine.
Photo by Kim Feeley McBride
"We always have a need for fosters — the need never goes away," Gonzalez says. "Fostering is temporary, so there might be a need down the line a few weeks from now if people return to work or for some reason can no longer foster. We've had such a high volume of emails to the foster office that even if we're unable to match you with a pet today, we might need to call on you tomorrow or next week. Just having a new crop of interested fosters to pull from makes a huge difference."

Of course, the ultimate goal from fostering is for the pet to find a permanent home, whether the foster parent decides to keep it or can introduce it to its forever family. The influx of new fosters is already making a significant impact on pets in need. At Wonder Paws, Lara recalls one couple she'd been in touch with before the coronavirus outbreak. They had wanted to foster a dog but were never home often enough because of their work schedules.

"Now that they are working from home for at least three weeks, they decided that they wanted to foster. They helped us take out one of our dogs we've had longest," she says.

The dog, a pit bull mix named Ava, had been surrendered by her family after they no longer had time to care for her properly, and she had been in boarding for months. After leaving Wonder Paws with her foster parents, Ava soon found a new home.

"Within 24 hours, we had an adopter," Lara says. "And within two days, she was in her new home. That was one of the happiest stories we had."

Wonder Paws Rescue. wonderpawsrescue.com. To foster, fill out the online application.
KEEP MIAMI NEW TIMES FREE... Since we started Miami New Times, it has been defined as the free, independent voice of Miami, and we'd like to keep it that way. With local media under siege, it's more important than ever for us to rally support behind funding our local journalism. You can help by participating in our "I Support" program, allowing us to keep offering readers access to our incisive coverage of local news, food and culture with no paywalls.
Make a one-time donation today for as little as $1.