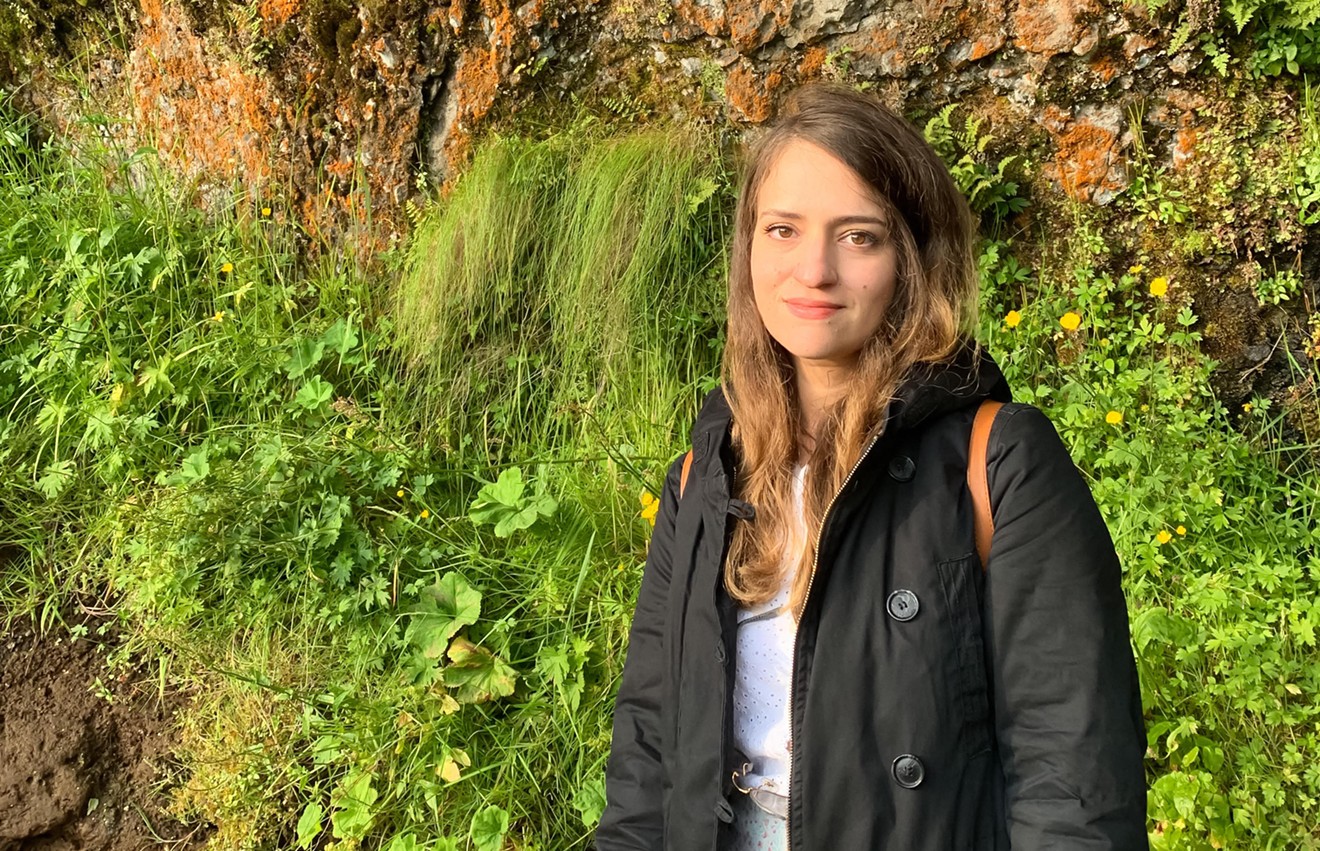 The pages hold literal and literary snapshots of Miami from the late ‘90s and early aughts that will spark feelings, regardless of whether you grew up in the Magic City. But if you spent long nights chatting with friends on the hood of a Honda Civic in Kendall or remember hiding inside the clothing racks at Burdines as a little kid, this book may feel like it was written for you.

“I associate Miami most with home when I’m not there,” says the soft-spoken Oliver, who grew up in Venezuela, Miami, and Chile and is a longtime New York resident.

Once, while living in the mountains of Chile as a young child, a sunset even brought on that familiar Miami feeling.

“I have this memory of seeing the sky outside the window turn pink — and that wasn’t usual, especially in Santiago in the ‘90s because of the smog. I was like, ‘Oh, that’s like home,’” she explains.

At Florida International University, Oliver studied English literature and workshopped her writing with Pulitzer Prize-nominated poet and FIU professor Campbell McGrath. There, she realized her interest in creating hybrid works that include images as well as words.

She earned her MFA in poetry at Brooklyn College, where she later taught as an adjunct professor. Oliver now teaches creative writing and literature courses to high schoolers for Syracuse University Project Advance and edits an online journal of poetry and art, FEELINGS. Her writings have been featured in Brooklyn Poets, Brooklyn Rail, and Columbia Journal. Next year, Spuyten Duyvil Press will publish please mr postman, an illustrated book she created to honor her late friend, Miami-bred musician Kristopher Pabon of Pygmy, Down Home Southernaires, and Animal Tropical.

She started referencing her hometown in her first book, Cosmos A Personal Voyage by Carl Sagan Ann Druyan Steven Soter and Me, published in 2017.

“There were little bits of Miami landscape that moved through it,” Oliver says.

That was just the beginning.

The poems in science fiction fiction present a moment in time packed with details — like a photograph. Sometimes, she says, she’s reminded of details she left out, like, "‘Should I have mentioned Power 96?’”

But unlike a snapshot, Oliver says, “I wasn't writing about a static home. Because of Miami’s architectural history and landscape being erased and reanimated over and over and the Everglades being destroyed and restored — even in a physical sense — it’s a place that erases itself and then reanimates itself again. That intersected with the fragmented memories in an interesting way.”

With this work, she explores the experience of photography prior to the ubiquity of iPhones. The first poem in the book is titled “Nokia," a reference to an older phone used for making calls to mom, not for surfing social media. It was important for her to include pop-culture references of that era before the lightning-speed internet we carry in our pockets now.

“The way popular consciousness was experiencing popular media at that time is very different from now. It’s very rapid and fluid now in a different way. I wanted to attend to the fact that people learned about a cool show, that you recommended to somebody, more slowly.” While she thinks of the high schoolers she teaches as having a "new intelligence," with this book, Oliver says, "I also wanted to honor what it looked like to be a kid when I was a kid.”

Oliver is working on a new book, dormilona, which means “sleepyhead” in Spanish, and in Venezuela, it refers to a nightgown. In it, she's exploring her experiences of not being able to return to her homeland of Venezuela, sleep, and dreaming.

Earlier last year, she was planning to get her sleep waves recorded and incorporate the data into this text. Owing to the restrictions of the pandemic, she spent her socially distanced 2020 reading about sleep and sleep studies instead. For the work, she's collaborating with New York City-based, Miami-bred artist and seamstress Alex Silva to create actual garments to correspond with her own illustration in the book’s “glossary of nightgowns.”

What is a glossary of nightgowns? It's sleepwear for different activities.

If ever there were a poetic image to highlight in a book written in 2020, it is certainly a nightgown made for drinking coffee all day or looking at the moon.

Oliver is accepting submissions of poetry, art, and audio for the journal she edits, FEELINGS. She’s always looking to feature Miami-based artists and writers.
KEEP MIAMI NEW TIMES FREE... Since we started Miami New Times, it has been defined as the free, independent voice of Miami, and we'd like to keep it that way. With local media under siege, it's more important than ever for us to rally support behind funding our local journalism. You can help by participating in our "I Support" program, allowing us to keep offering readers access to our incisive coverage of local news, food and culture with no paywalls.
Make a one-time donation today for as little as $1.