The Best Things to Do in Miami This Weekend: Bermuda Beach, Bloom, and Sol Miami Pool Party

Kristina Karina Photography, Islandbox Photography & PartyInc.com
We're set to get another steamy weekend in this tropical paradise we call home, but a little water never kept things from getting lit, right? At least not figuratively. That's why Miami has birthday parties, pool parties, throwback parties, and Father's Day parties to keep you on a steady diet of good vibes and alcohol till you're forced back to normalcy Monday morning.

Bermuda Beach at Kill Your Idol
If you know who Notorious Nastie is, it should be no surprise that the Bermuda Beach show to celebrate his birthday is planned to be a carnival of local underground talent. Lay the release of Lamebot's "Strains: Variety Pack EP 3" on top, and you've got a recipe for the best of Miami nightlife packed into five hours of strange debauchery. Expect performances by Charisma Coates, Viper x Piper, Master Feathers, and Lamebot, plus sets by local rappers Joe Galaxy and Writesound. Be one of the first to show up, and you could download "Strains" for free.

Havana Nights at Concrete Beach Brewery
What would your dad enjoy more than sipping a cold beer between puffs of a fine cigar? How about chowing down on Cuban food and playing a few games of dominoes? To commemorate the launch of Concrete Beach's Havana Lager can distribution, the brewery is debuting a monthly party including your favorite Cuban pastimes. The first Havana Nights event will feature a live salsa band. Saturday brings a cigar pop-up shop, and Sunday gets Dad's boo in the picture with free salsa lessons. In true Cuban fashion, be prepared to talk shit and wile away the hours on Caribbean time.

Grand Opening at B-Side
Those of us who remember Wynwood's past as a barren square mile of random warehouse art spaces and weave shops are probably getting too old for the neighborhood's present. We ask ourselves things like Why do people want their faces to look like dogs? and What does "lit" mean? Well, the owner of Wood, one of Wynwood's hottest bars, understands you. That's why he's opening a bar dedicated to throwbacks. They're not just for Thursdays anymore, kids. The grand opening of B-Side will include a performance by Special Ed of "I Got It Made" fame, plus spins by DJ Ynot.

Ivan Manjarrez
Natalia Lafourcade at Olympia Theater
There's no shortage of reggaeton or salsa on our streets, but Miami's rich Latin-folk tradition is often ignored in favor of twerking in the club. That's why Natalia Lafourcade's newest effort, Musas, is such a gem. The delicate guitar work of her accompaniment, Los Macorinos, almost seems made for the chanteuse and her silky soprano voice. Her U.S. tour will kick off at the Olympia Theater, where she'll perform from Musas and her Grammy-winning album, Hasta La Raiz.

People Matter Fest at Athalie Range Park
You don't need to listen to 103.5 the Beat to be familiar with Papa Keith. Since the beginning of his career, the native New Yorker has had his finger on the pulse of the hip-hop and Caribbean cultures that make the Magic City so uniquely itself. He's using that influence to make a positive impact on black communities in Miami through his People Matter Fest. Two city commissioners who helped organize the event are calling for a 24-hour cease-fire while families enjoy a father-son basketball tournament, a DJ battle, food trucks, local vendors, and art exhibits.

David Almeida
Bloom at Vizcaya Village
Vizcaya Village was originally meant to house service staff and grow food for the main house in 1916. The land was eventually donated to Phillip and Patricia Frost, but its recent reclamation has inspired historians at Vizcaya to return the land to its original glory. The Processional Arts Workshop (PAW) will present Bloom: A Twilight Performance to tell the story of this venue through illuminated lanterns and mobile projections. No cell-phone activity or flash photography will be permitted to allow for full emersion.

Jaialai EP-Release Party at 1306
Jai alai, touted as the fastest sport in the world, is a point of pride for South Floridians. And though Miami's psych foursome Jaialai doesn't slam the fastest tunes, it has adopted the name of the town's beloved sport. The group will celebrate its new EP, When I'm on the Run, three days after its June 14 release at the enchanting downtown bar and event space 1306 Miami. Jaialai will perform alongside Heavy Drag, Private School, and DJ David Rondon.

Tig Notaro at Amaturo Theater
Tig Notaro is something of a legend. Practically the antithesis of dudebro comedy, her work gained notoriety after Louis C.K. distributed a recording of one of her personal and brilliant performances. Notaro followed that with a standup set in which the cancer survivor performed shirtless, with her double-mastectomy scars visible. Her comedy is far from the shocking or gimmicky kind, however, relying instead on observational humor informed heavily by Notaro's life and delivered with an almost deadpan wryness. And it's hilarious. Catch this comic's standup before binge-watching her show, One Mississippi.

Father's Day BBQ at Freehand Miami
Father's Day means the freedom to do Man Stuff. Like drink whiskey. Like cook a pig in a pit after injecting that pig with whiskey. Like drinking whiskey while eating whiskey from a juicy, slow-roasted pig. Even if your dad isn't Ron Swanson, he's sure to appreciate the Father's Day BBQ at the Freehand Hotel, which will offer chef Jimmy Lebron's menu of Johnny Walker-inspired fare to celebrate fatherhood. Because if you really want Dad to know you love him, don't use words; use whiskey. 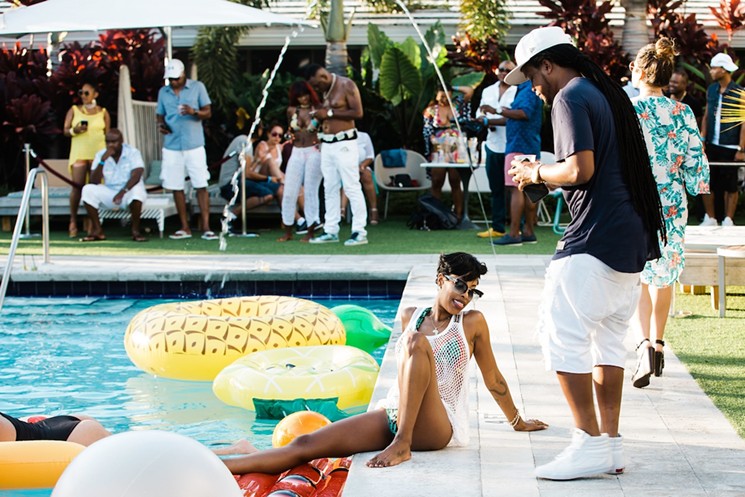 Kristina Karina Photography, Islandbox Photography & PartyInc.com
Sol Miami Pool Party at Vagabond Hotel
Miamians know the best time to hit up the pool is when the thermometer is popping off the charts and beads of sweat gather under their lower lip. With this knowledge in mind, the PLUR Group is taking over the historic midcentury-modern pool at the Vagabond Hotel with the Sol Miami Pool Party. The island-themed bash will feature DJs Dr Esan, Marvelous, and Fergie & Springer, as well as food and bottle service. It's strictly 21 and older, and the dress code is casual brunch or "fashionably chic swimwear," so get your couture statements prepped and ready to get lit Caribbean-style.