On Thursday, the Wharf Miami celebrates Mexican Independence Day with ¡Viva México! — an event honoring the nation's history with live music and Mexican-inspired dishes from La Santa Taqueria, the Chicken Spot, Sake Room, and Spris Artisan Pizza. Get the most out of the festivities with all-day drink specials, such as a free Corona with every Casa Noble tequila shot. 4 p.m. Thursday, at the Wharf Miami, 114 SW North River Dr., Miami; 305-906-4000; wharfmiami.com. Admission is free. Olivia McAuley

Imagine being able to experience film, art installations, and live performance all at once. You can avail yourself of precisely that experience with a visit to Birds of Paradise at the Adrienne Arsht Center. The program, the work of choreographer Pioneer Winter, aims to celebrate queer and marginalized people. For four consecutive days starting on Thursday, viewers can experience live dance and installations surrounding themes of transformation, agency, and survival. 7:30 p.m. Thursday through Sunday, at the Adrienne Arsht Center for the Performing Arts, 1300 Biscayne Blvd. Miami; 305-949-6722; arshtcenter.org. Tickets cost $40. Ashley-Anna Aboreden

Earlier this year, singer-songwriter Juanes dropped his ninth studio album, Origen, a collection of cover songs sung in English and Spanish, including classics from Fito Páez, Juan Luis Guerra, and Bruce Springsteen. On Thursday at the Fillmore Miami Beach, Juanes kicks off his 20-date tour. The Colombian artist will be before two back-to-back shows that will include his most recent covers along with classics like "A Dios le Pido," "La Camisa Negra," and "Me Enamora." 8 p.m. Thursday and Friday, at the Fillmore Miami Beach, 1700 Washington Ave., Miami Beach; 305-673-7300; fillmoremb.com. Tickets cost $45 to $345 via livenation.com. Jose D. Duran

If the glamourous drama of the ballroom scene on FX's Pose has caught your eye, then make sure to check out Miami Beach Pride's first-ever ballroom event. Legends Ball, hosted by Pose cast member Jason Rodriguez, will honor and celebrate South Florida's ballroom culture. Historically, balls consisted of Black and Latino LGBTQ+ people who organized and participated in the events, defying laws banning individuals from wearing clothing associated with the opposite gender. Thursday's event will feature an impressive lineup of celebrity guests, including Jack Mizrahi from the Gorgeous House of Gucci. 8 p.m. at Copa Room, 1235 Washington Ave., Miami Beach; miamibeachpride.com. Tickets cost $35 to $100 via eventbrite.com. Ashley-Anna Aboreden 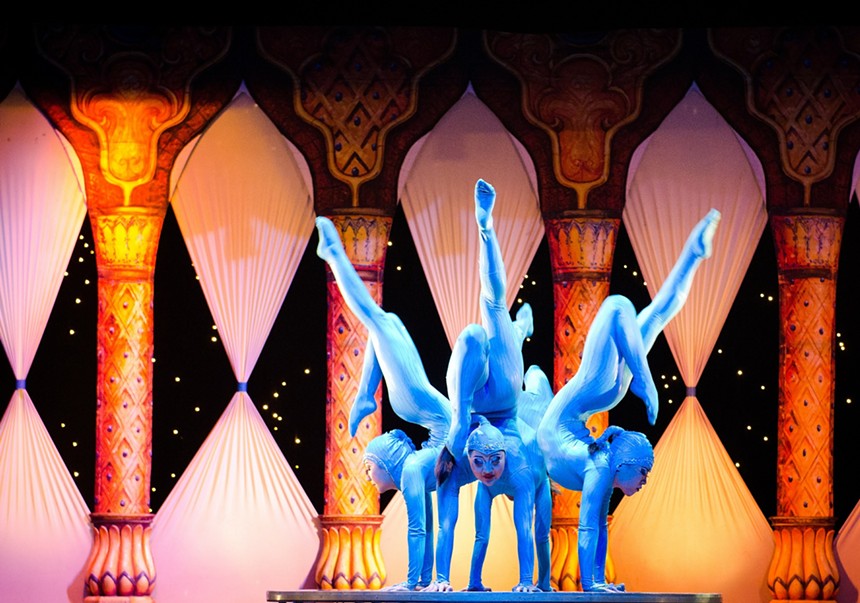 Admit it: If you weren't watching Netflix during the pandemic, you were probably scrolling through Pornhub. Uncounted millions have sex workers to thank for getting them through the last year. And what better way to celebrate than at the largest adult convention in the U.S.? Starting on Friday, Exxxotica returns to the Miami Airport Convention Center for three days of X-rated fun. Catch stars like Stormy Daniels, Mary Carey, Katie Morgan, and Bree Star, along with fetish and kink performances and seminars like "How to Be an Internet Whore, "Mouth Masterclass," and "Get Paid to Play." Friday through Sunday, at the Miami Airport Convention Center, 711 NW 72nd Ave., Miami; 305-261-3800; macc.com. Tickets cost $20 to $330 via exxxoticaexpo.com. Jose D. Duran

Spooky season is starting early this year, thanks to Haunted Circus, which hosts its grand opening at Tropical Park on Friday. Immerse yourself in the otherworldly universe of the Halloween-themed carnival, where gymnasts somersault in the air at the main event, the whole family can play detective to solve the mystery of the missing acrobat, and kids can pet fluffy friends at the petting zoo. While the theme is spooky, fear not — the vibe is more seasonal than scary and can be enjoyed by all ages. 5 p.m. Friday, at Tropical Park, 7900 SW 40th St., Miami; hauntedcircusmiami.com. Tickets cost $29 to $37. Olivia McAuley

British native Jamali Maddix has made a name for himself as a stand-up comedian, touring with heavyweights like Jim Jefferies. But he's been standing out from the pack all on his own ever since he received rave reviews for his debut during the Edinburgh Festival Fringe in 2016, then going on to host Hate Thy Neighbor for Viceland. Maddix is on tour stateside and heading to Gramps on Friday night to perform at the venue's backroom, Shirley's. 8:30 and 10:30 p.m. Friday at Gramps, 176 NW 24th St., Miami; 855-732-8992; gramps.com. Tickets cost $25 via eventbrite.com. Olivia McAuley

Not even Miami Beach Pride is immune to the pitfalls of Pride events everywhere, focusing the majority of its events on cisgender men. Lesbians, in particular, are often overlooked. But on Saturday, Pandora Events presents Fling at Wynwood rooftop venue No. 3 Social. The official Miami Beach Pride women's event features DJ Citizen Jane on the decks for the best queer-girl experience of the weekend. Grab a drink, some friends, and enjoy a night under the Miami stars, where all are accepted. 10 p.m. Saturday, at No. 3 Social, 50 NW 24th St., Miami; 305-748-4540; no3social.com. Tickets cost $20 via eventbrite.com. Ashley-Anna Aboreden

Over the years, Miami Beach Pride has evolved into a weeklong celebration of the LGBTQ+ community, featuring activations and special events, all culminating in Sunday's parade. This year the event will feature over 50 one-of-a-kind floats, with former football player and Voice contestant Esera Tuaolo serving as grand marshal. Find all the action on Ocean Drive from Fifth to 15th Streets, followed by a concert spread across two stages, featuring Walk the Moon, Crystal Waters, and DJ Tracy Young. 11 a.m. Sunday, at Lummus Park, 1130 Ocean Dr., Miami Beach; miamibeachpride.com. Admission is free. Olivia McAuley

Calling all Miami Dolphins fans — however disheartened you may be. The NFL season officially kicked off September 9, and this Sunday, you can finally watch a game again in person. The second game of the season sees the Dolphins face off against the Buffalo Bills at Hard Rock Stadium. Last season, head coach Brian Flores led the team to a 10-6 record, barely missing the playoffs. On Sunday, the Dolphins play the very team that made sure they'd miss the postseason party. 1 p.m. Sunday, at Hard Rock Stadium, 347 Don Shula Dr, Miami Gardens; 305-943-8000; hardrockstadium.com. Tickets cost $100 to $915 via ticketmaster.com. Ashley-Anna Aboreden

If you've ever been mesmerized by the vibrancy of Bollywood or perhaps are looking to try something new, you might want to add Monday's Intro to Bollywood Dance workshop to your calendar. Dance teacher and choreographer Pooja Uberoi will get your heart rate up with this high-impact, fun workout. Don't worry if you've never danced before; this is an intro class welcome to anyone wanting to explore, move, and meet new people. 7 p.m. Monday, at X Miami, 230 NE Fourth St., Miami; 786-749-0909; xmiami.co. Tickets cost $18 via gocafenamaste.com. Ashley-Anna Aboreden

Buchanan's Scotch Whisky has launched La Reunión, a pop-up experience to safely share in-person moments again. On Tuesday, the Scottish spirits brand lands in Maps Backlot in Wynwood with complimentary cocktails, live music, craft and food vendors, and a sneaker customization experience courtesy of Fila. Guests can also give back to the community at the event; Buchanan's has partnered with local charity Buddy System MIA, which fights for food access in the city. The event is first-come, first-served, so make to reserve a spot. 8 to 11 p.m. Tuesday, at Maps Backlot, 342 NW 24th St., Miami; 305-532-7880; mapsproduction.com. Admission is free with RSVP via eventbrite.com. Jose D. Duran