If you’ve never had the pleasure of geeking out at Nerd Nite, now’s your chance. Every month, Gramps hosts mini-lectures on topics of all sorts given by experts. It’s interactive, fun, and always feels fresh — plus, you can drink while learning something. This month's topics are "Caribbean Micronationalism," led by editor and publisher Jason Katz, and "Drugs," by law students Leiona Noah, Shaun Lenihan, and Ashley Lago. 7:30 to 9 p.m. Thursday, at Gramps, 176 NW 24th St., Miami; 855-732-8992; gramps.com. Admission is free. Ashley-Anna Aboreden 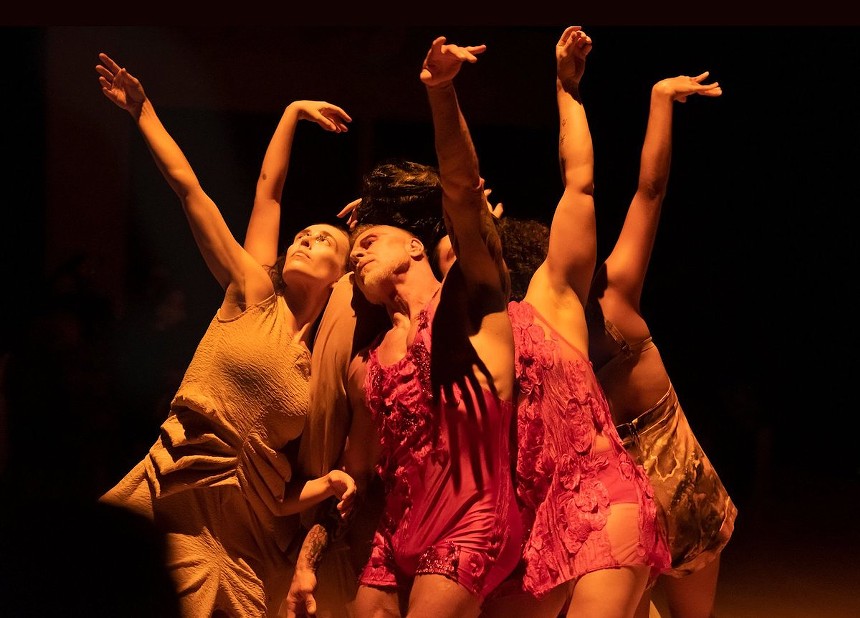 On Friday and Saturday, Dance Now! Miami joins forces with Limón Dance Company, one of New York City's most celebrated modern dance ensembles, for its "Program III." The program sees both companies collaborate on the presentation of The Waldstein Sonata, a 1971 unfinished work by José Limón completed after his death by Dr. Daniel Lewis. In addition, Limón Dance Company will perform the 1967 work Psalm, while Dance Now! takes the stage for the Limón classic La Malinche and a reprisal of its critically acclaimed work Anusim, What is Hidden is Never Lost. 7:30 p.m. Friday, at the Broward Center for the Performing Arts, 201 SW Fifth Ave., Fort Lauderdale; and 8 p.m. Saturday, at Aventura Arts & Cultural Center, 3385 NE 188th St., Aventura; dancenowmiami.org. Tickets cost $20 to $50. Jose D. Duran

On Friday, comedian John Mulaney heads to Hard Rock Live as part of his From Scratch Tour. The former Saturday Night Live writer and Big Mouth star kicked off his current stand-up tour back in March, and it's stopping in South Florida for two back-to-back shows. His last stand-up tour, Kid Gorgeous, sold out across the U.S., with the Radio City Music Hall show in New York recorded and released as a special on Netflix. The special went on to win an Emmy Award for "Outstanding Writing for a Variety Special" in 2018. 8 p.m. Friday and Saturday, at Hard Rock Live, 1 Seminole Way, Hollywood; 954-797-5531; seminolehardrockhollywood.com. Tickets cost $68 to $138 via ticketmaster.com. Ashley-Anna Aboreden

After premiering Bird of Paradise last fall at the Adrienne Arsht Center, choreographer Pioneer Winter returns to wow audiences with his work centering on queerness. Birds of Paradise II at the Miami-Dade County Auditorium celebrates queerness, and the resilience, power, and endurance queer individuals have. The work builds on the Arsht Center original, exploring how people find their flock. 8 p.m. Friday and Saturday, at Miami-Dade County Auditorium, 2901 W. Flagler St., Miami; 305-547-5414; miamidadecountryauditorium.org. Tickets cost $10 to $25 via eventbrite.com. Ashley-Anna Aboreden

No party is truly complete without mimosas and plenty of R&B. Enter Are N Brunch, an event that pairs midday fare and alcoholic beverages with your favorite R&B tracks at the Anderson. Guests can grab a seat and enjoy the brunch menu while singing along with the sultry soundtrack. In addition to the music, there will also be games and other activities for diners to enjoy. Noon to 5 p.m. Saturday, at the Anderson, 709 NE 79th St., Miami; 786-401-6330; theandersonmiami.com. Tickets cost $10 to $200 via eventbrite.com. Sophia Medina

April might have been poetry month, but there’s still lots of prose to go around in May. On Saturday, Hampton Art Lovers hosts poet Christell Victoria Roach, an MFA candidate at the University of Miami, for “Poetry Under a Simple Tree.” The event is a celebration of language, history, community, and belonging in the historically Black community of Overtown. Roach will read a section from her book, Bluesing, and premiere her first short film. Attendees can also explore the current exhibition on view, "Starry Crown: Art of #BlackGirlMagic." 7 to 10 p.m Saturday, at Historic Ward Rooming House, 249 NW Ninth St., Miami; 786-529-8624; hamptonartlovers.com. Admission is free. Ashley-Anna Aboreden

On Saturday, Florida Grand Opera brings its production of the 1709 opera Agrippina to the Scottish Rite Temple. Composed for the 1709-10 Venice Carnevale season, it tells the story of Agrippina, the mother of Nero, who plots the downfall of Roman Emperor Claudius to install her son on the throne. It is one of George Frideric Handel’s earliest operatic compositions, with soprano singer Christine Lyons performing as the titular character in the FGO show. 7 p.m. Saturday, 2 p.m. Sunday, and 8 p.m. Tuesday and Thursday, at Scottish Rite Temple, 471 NW Third St., Miami; fgo.org. Tickets cost $16 to $230. Jose D. Duran

After wrapping up the Europen leg of his tour, singer-songwriter Keshi stops at Revolution Live to bring his sold-out Hell/Heaven Tour to South Florida. Keshi’s sound is a mixture of mellow lo-fi beats paired with soulful vocals aimed to impact all those who listen. His music has accumulated over one billion streams on platforms such as Spotify, thanks to singles like “Like I Need U” and “Right Here.” 7 p.m. Saturday, at Revolution Live, 100 SW Third Ave., Fort Lauderdale; 954-449-1025; jointherevolution.net. Sold out. Sophia Medina

Indulge in the exquisite beauty of flowers when the Tamiami International Orchid Festival returns to the Miami Dade Fair Expo Center on Sunday. Known to be one of the largest orchid events in the U.S., organizers welcome a magnitude of flower vendors to expose enthusiasts to a whole world of orchids. The festival includes planters from Japan, Malaysia, Thailand, Taiwan, Brazil, and Jamaica. Each one will not only sell crafts and gifts in honor of the flower, but they will also compete for trophies and rewards from the American Orchid Society, which will include a $500 cash prize. 11 a.m. Sunday, at Miami Dade Fair Expo Center, 10901 SW 24th St., Miami; 305-223-7060; tamiamiorchidfestival.com. Tickets cost $12 to $90. Sophia Medina

Having worked with the likes of Maluma and Myke Towers, it seems like it's only a matter of time until Colombian singer-songwriter Blessd becomes just as well known in the U.S. Last year, the 22-year-old dropped his debut album, Hecho en Medellín, and on Sunday, he stops at Oasis Wynwood for a live performance. Expect to hear fan favorites like “Medallo,” "Quien TV," and "Lejania." With his profile rising, it's only a matter of time before he starts taking the stage at arenas across the nation. 4 p.m. Sunday, at Oasis Wynwood, 2335 N Miami Ave., Miami; oasiswynwood.com. Tickets cost $45 via tixr.com. Sophia Medina

There’s never a bad time to focus on yourself and reset your body, but starting your week in that mind frame certainly doesn't hurt. Head to the Center for Subtropical Affairs for Mindset Mondays, a night of wellness and self-exploration led by certified yoga instructor Raquel B. There will be a vinyasa flow along with a short journal prompt and meditation. After that, just let the serenity marinate inside you for the rest of the week. 6:30 to 8 p.m. Monday, at Center for Subtropical Affairs, 7145 NW First Ct., Miami; cstamiami.org. Admission is free, but a $22 donation is suggested. Ashley-Anna Aboreden

On Tuesday, multiplatinum artist Halsey kicks off their Love and Power Tour at the iThink Financial Amphitheatre in West Palm Beach. In support of their recent album, If I Can’t Have Love, I Want Power, the pop artist reunites with fans to share the music off the Grammy-nominated work. The singer has amassed more than 31 billion combined global streams, with 12.5 billion in the U.S. alone. Their recent album follows the release of 2020's Manic, which topped the Billboard 200 chart. Opening for Halsey are singer-songwriters Beabadoobee and PinkPantheress. 7 p.m. Tuesday, at iThink Financial Amphitheatre, 601-7 Sansburys Way, West Palm Beach; 561-795-8883. Tickets cost $29.50 to $1,010 via livenation.com. Sophia Medina

Expand the senses and open the mind at Modern ŌM's latest seminar, “Psychedelic Women.” The event dives into the world of psychedelic medicine and speaks on the benefits of the unchartered practice. Attendees have the chance to hear panelists' stories and the impacts hallucinogenics have made on their everyday lives. In addition to an endless knowledge on the topic of “psychedelic assistance in womanhood,” guests will also have the chance to unwind during a yoga experience led by Giselle Fiumara. 7 to 9 p.m. Tuesday, at Modern ŌM Bungalow, 5020 NE Second Ave., Miami; 786-617-5056; modernom.co. Tickets cost $28 to $33 via eventbrite.com. Sophia Medina

On Wednesday, watch Actors’ Playhouse tackle Agatha Christie's classic mystery novel with its production of Murder on the Orient Express. Adapted for the stage by Ken Ludwig, the play follows the same beats as the novel: Detective Hercule Poirot has to solve a murder while aboard the Orient Express while interacting with a colorful cast of characters. For its South Florida premiere, Actors' Playhouse's production will star Terry Hardcastle as Poirot, with David Arisco serving as director. 8 p.m. Wednesday through June 5, at Actors’ Playhouse at the Miracle Theatre, 280 Miracle Mile, Coral Gables; 305-444- 9293; actorsplayhouse.org. Tickets cost $40 to $85. Ashley-Anna Aboreden
KEEP MIAMI NEW TIMES FREE... Since we started Miami New Times, it has been defined as the free, independent voice of Miami, and we'd like to keep it that way. With local media under siege, it's more important than ever for us to rally support behind funding our local journalism. You can help by participating in our "I Support" program, allowing us to keep offering readers access to our incisive coverage of local news, food and culture with no paywalls.
Make a one-time donation today for as little as $1.