Mariah the Scientist at the Ground: See Saturday Photo by Jerald Johnson

Pour your bleeding heart out during Sweet Caroline’s Emo Karaoke Party. Brave souls will have the chance to choose from a huge catalog of emo classics and shout at the top of their lungs as they compete for the best heartbreaking performance. In honor of the special night, Sweet Caroline will offer a specialty cocktail, “Cute Without the E.” Don’t miss out on a whirlwind of emotions and nostalgia. 9 p.m. Monday, at Sweet Caroline Karaoke Bar, 1111 SW First Ave., #107; Miami; 786-673-2522; sweetcarolinebar.com. Admission is free. Sophia Medina

"Light Space Life" at the Miami Center for Architecture & Design takes a closer look at the work of SOATA, the South African architecture firm that has designed luxury residential and commercial projects across six continents. The exhibition explores the three core ideas exemplified in the firm's work: light, space, and life. The show premiered in Cape Town in 2017 before moving on to Zurich in 2019. After its tenure in Miami, it will travel to New York City. 10 a.m. to 4 p.m. Tuesday through June 30, at Miami Center for Architecture & Design, 310 SE First St., Miami; 305-448-7488; miamicad.org. Admission is free with RSVP. Jose D. Duran

Forget the headlines for a moment and experience one of Ukraine's greatest cultural contributions: music. On Wednesday, the University of Miami's Frost School of Music hosts An Evening of Ukrainian and Polish Song as part of the Frost Chopin Festival. The bill features soprano Olga Pasichnyk and pianists Ewa Pobłocka and Kevin Kenner. The festival continues through June 26. 7 p.m. Wednesday, at UM Maurice Gusman Concert Hall, 1314 Miller Dr., Coral Gables; frostchopinfestival.com. Admission is free with RSVP. Ashley-Anna Aboreden

City Theatre celebrates the music of Bob Marley with its latest production, Three Little Birds, at the Adrienne Arsht Center for the Performing Arts. Based on the children's book of the same name by Cedella Marley and adapted for the stage by Michael J. Bobbitt, the show follows Ziggy, a frightened individual afraid to leave his house owing to potential dangers like tropical storms and evil spirits, as well as a sneaky yet deceitful foe named Duppy. With the help of feathery friends like Dr.Dirb, Ziggy overcomes his fears and learns that “every little thing gonna be all right.” 7:30 p.m. Wednesday through July 9, at Adrienne Arsht Center for the Performing Arts, 1300 Biscayne Blvd; Miami; 305-949-6722; arshtcenter.org. Tickets cost $20 to $30. Sophia Medina

On Thursday, author Carlos Manuel Álvarez puts in an appearance at Books & Books for a conversation on his latest book, The Tribe: Portraits of Cuba. His work centers on the current realities and happenings on the island, including the re-establishment of diplomatic relations with the U.S., the death of Fidel Castro, and the convulsions of the San Isidro Movement. Ultimately, The Tribe brings readers a glimpse of the lives of the Cuban people, including athletes in exile, underground musicians, and migrants attempting to make their way across Central America. 7 p.m Thursday, at Books & Books, 265 Aragon Ave., Coral Gables; 305-442-4408; booksandbooks.com. Admission is free with RSVP via eventbrite.com. Sophia Medina

With Comedy Central and Netflix specials, Mexican comedian Alex Fernández is familiar to Latin American audiences. His podcast, El Podcast de Alex Fernández, is one of the most listened-to podcasts in all of Mexico and he has performed on the screen and the stage. On Thursday, Fenández lands at the Miami Improv for a stand-up performance en español. The laughs are seemingly guaranteed for a comedian with a special titled The Best Comedian in the World. 8 p.m. Thursday, at Miami Improv, 3450 NW 83rd Ave., Doral; 305-441-8200; miamiimprov.com. Tickets cost $25 to $75. Ashley-Anna Aboreden 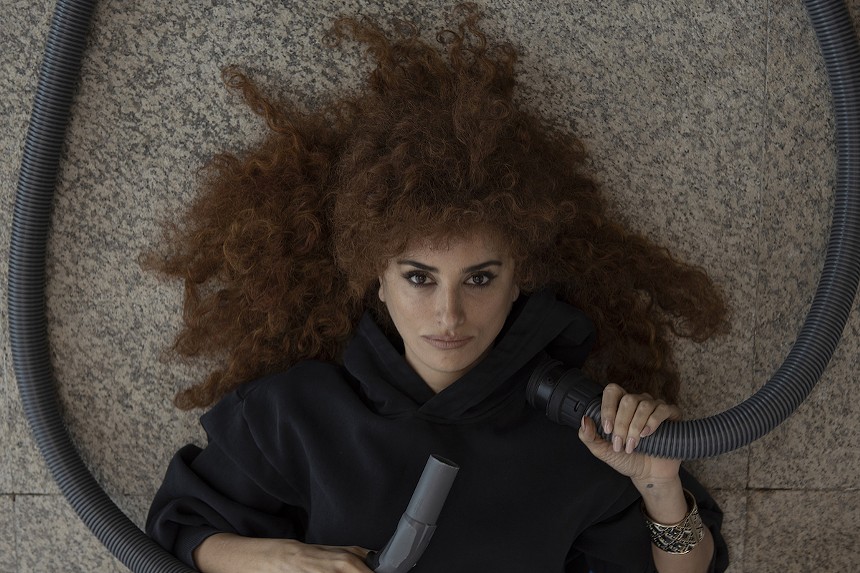 Directed by Mariano Cohn and Gastón Duprat, the meta-comedy Official Competition stars Antonio Banderas, Penelope Cruz, and Oscar Martínez as three egomaniacs hired by a wealthy businessman to create a film worthy of the Palme d'Or. Overall, Cohn and Duprat deliver a skewering critique of "highbrow" filmmaking. "Despite its commitment to biting humor and acerbic analysis, Competencia Oficial is, at its heart, a celebration of artists and their process," Hollywood Reporter critic Lovia Gyarkye writes of the film. The movie premieres at the Coral Gables Art Cinema on Friday with a red-carpet event. 7 p.m Friday, at Coral Gables Art Cinema, 260 Aragon Ave., Coral Gables; 786-472-2249; gablescinema.com. Tickets cost $12.75. Sophia Medina

Impulse Group is a nonprofit that builds a strong, healthier community for gay men. On Friday, the Miami chapter hosts Laugh Out Proud at Rácket. But this isn't just any comedy show. That's because, in keeping with the group's mission, the event will feature a panel discussion on mental health and how everyone can help themselves and others. Comedians on the lineup include Norman Freeman, Funky Divena, Alex English, Nicky Paris, and Sampson McCormick. Oh, and did we mention there will be free food and an open bar? 8 p.m. Friday, at Rácket, 150 NW 24th St., Miami; 786-637-2987; racketwynwood.com. Admission is free with RSVP via eventbrite.com. Ashley-Anna Aboreden

Ukrainian DJ and Siona Records head Miss Monique (AKA Alesia Arkusha) stops at Treehouse on Friday to dish out her progressive-house sound. Arkusha has quickly risen to become one of the most recognizable names in dance music in Europe. She has more than 85 million views on YouTube and a million followers across her social platforms. A woman of many talents, she's always DJ'ing, producing music, or doing A&R for her label. Here's hoping she gets a chance to take a break during her time in Miami Beach. 9 p.m. Friday, at Treehouse, 323 23rd St., Miami Beach; 786-318-1908; treehousemiami.com. Tickets cost $20 to $40 via eventbrite.com. Ashley-Anna Aboreden

Little River gallery Dimensions Variable presents "Who Kills Ai Weiwei," a solo exhibition by Cuban-born, Miami-based artist Francisco Masó. The show, which opens on Saturday and runs through September 10, posits: What happens when a dissident artwork is owned by the regime it criticizes? Through that lens, Masó reflects on the ethics of political art through three recent projects. The works are based on photographs from online archives about scenes of repression in Cuba. 6 to 9 p.m. Saturday through September 10, at Dimensions Variable, 101 NW 79th St., Miami; dimensionsvariable.net. Admission is free. Jose D. Duran

The Black Market Super Queer Carnival at Revolution Live is an all-day event that promises to be filled with fun, shopping, and some unexpected surprises. Get ready for nonstop entertainment from stilt walkers, clowns, fire performers, acrobats, games, tarot readers, and more. Visitors will have the chance to buy handmade items and vintage goods at the flea market. Don't miss the drag show, a drag battle, and burlesque performances and music by Otto Von Schirach, Caveman Cult, Roxx Revolt and the Velvets, and more. 6 p.m. Saturday, at Revolution Live, 100 SW Third Ave., Fort Lauderdale; 954-449-1025; jointherevolution.net. Tickets cost $20 to $50 via universe.com. Sophia Medina

Atlanta-based R&B singer-songwriter Mariah the Scientist burst onto the scene in 2018 with her debut project, To Die For. Now an RCA Records signee, she recently released her EP The Intermission and is embarking on her Experimental Tour. On Saturday, the singer makes her way down to the Ground, where fans are likely to hear live renditions of tracks like "2 You," "Aura," and "Beetlejuice." 8 p.m. Saturday, at the Ground, 34 NE 11th St., Miami; thegroundmiami.com. Tickets cost $27.50 via ticketmaster.com. Jose D. Duran

It's time to dance and cry at the rowdiest emo party to hit the streets of the Magic City. On Sunday, Mama Tried hosts Emo Nite Miami, an eventful night filled with dancing and singing to epic pop-punk classics with other fellow emo-heads, with music by DJ Jessica Who and a cavalcade of guest DJs. For this occasion, the downtown bar hosts a Pride-themed night to welcome those who never felt like they belonged. Guests are welcome to dress in Pride attire or come out in all-black outfits and tees supporting their favorite bands. 7 p.m Sunday, at Mama Tried, 207 NE First St; Miami; 786-803-8087; mamatried.com. Admission is free. Sophia Medina

Party until sunrise with Joris Voorn when he takes over the decks at Club Space's terrace on Sunday. The Dutch producer recently dropped his collaboration with Virsion, "Ripper," as well as remixes of Monkey Safari's "Safe" and Mees Salomé's "Fool's Paradise." Voorn's sound is often described as melodic tech-house, a genre deriving from strong melodies and heavy synths. His festival portfolio includes appearances at Tomorrowland, Ultra Music Festival, and EDC Mexico. 10 p.m. Sunday, June 26, at Club Space, 34 NE 11th St., Miami; 786-357-6456; clubspacemiami.com. Tickets cost $15 to $40 via eventbrite.com. Sophia Medina
KEEP MIAMI NEW TIMES FREE... Since we started Miami New Times, it has been defined as the free, independent voice of Miami, and we'd like to keep it that way. With local media under siege, it's more important than ever for us to rally support behind funding our local journalism. You can help by participating in our "I Support" program, allowing us to keep offering readers access to our incisive coverage of local news, food and culture with no paywalls.
Make a one-time donation today for as little as $1.