"The Eye of Afropunk": See Thursday Photo by Dennis Manuel

Hampton Art Lovers at the Historic Ward Rooming House Gallery opens "The Eye of Afropunk," an exhibition of the work of photographer Dennis Manuel, who has documented Black performance art for more than 20 years. An official photographer for the Afropunk Music Festival, Manuel has documented iconic performances, the crowds that witnessed them, and the groundbreaking work that has played out on the stages. The exhibit runs through March 13, in celebration of Black History Month. Thursday's opening event will feature an outdoor mingling and seating area with drinks and bites for sale. Noon to 6 p.m. Thursday, at Historic Ward Rooming House, 249 NW 9th St., Miami; 786-439-9718; hamptonartlovers.com. Admission is free with RSVP via eventbrite.com. Olivia McAuley

The exhibit "Inter | Sectionality: Diaspora Art from the Creole City" is making its way from the Corcoran School of Art and Design in Washington, D.C., to the Miami Design District for a few months — starting today (Friday, February 5) — before it heads to New Orleans in May. Curated by Sanjit Sethi, the former director of the Corcoran School, and Rosie Gordon-Wallace, founder and curator of Miami's Diaspora Vibe Cultural Arts Incubator, the multidisciplinary project explores stories of the African diaspora and looks at the "Creole City" as a local, regional, and global phenomenon. You can also check out an installation by Miami artist Asser Saint Val in the Moore Building's atrium. Opens February 5 and runs through May 31. Monday through Saturday 11 a.m. to 7 p.m. and Sunday noon to 6 p.m., at Moore 200 and Moore Atrium, 140 NE 39th St., Miami; miamidesigndistrict.net. Admission is free. Suzannah Friscia

Head out on a camping trip in your own city by joining Doral Central Park's annual Camping Under the Stars. You'll enjoy a night of stargazing, marshmallow roasting, and a movie projected on a large outdoor screen. Space is limited to 100 tents to ensure social distancing, and families must bring their own food and refreshments (no vendors will be on-site). It's just the right amount of "roughing it." 6 p.m. Friday, at Doral Central Park, 3000 NW 87th Ave., Doral; 305-593-6600; cityofdoral.com. Tickets cost $5 per tent via eventbrite.com. Suzannah Friscia 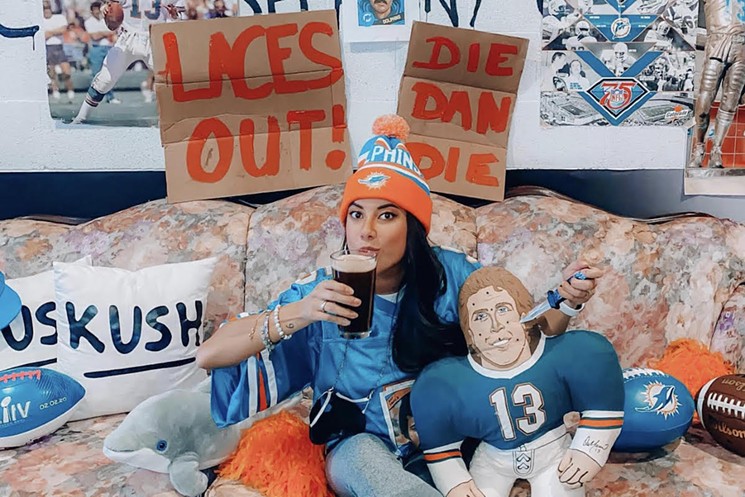 We may not be able to go dancing or clubbing the way we used to, so why not incorporate that energy into your workouts instead? On Saturday morning, Inhale Miami hosts Rave & Shine, a deep house yoga rave followed by brunch. Don your best white and neon rave-wear and let instructors Maria T. and Rikki K. lead you through a sunrise vinyasa yoga flow set to the beats of a live DJ, followed by a deep-healing sound bath. After you've danced it out, enjoy a gourmet vegetarian brunch and fruit bar and browse the wares from local vendors in the marketplace. 7:30 a.m. to 2 p.m. Saturday, at Inhale Miami, 6310 NE Second Ave., Miami; 786-391-1897; inhalemiami.com. Tickets cost $10 to $25 via eventbrite.com. Suzannah Friscia

On Saturday, Kush by Stephen's in Hialeah hosts Please Forgive Us, Ray Finkle. The party's name is a reference to the comedy classic Ace Ventura: Pet Detective. In the film, Dolphins quarterback Dan Marino is abducted by a crazy former player, Ray Finkle, who blames Marino for the downfall of his career. "Please Forgive Us, Ray Finkle," a hazy IPA by Tank Brewing, will be available for purchase. The event also serves as the launch for the restaurant's new market concept, Vintage Flea, featuring vendors like Annie's Attik, which sells vintage glassware and barware; tarot reading by Gaia's Path; and comic apparel and accessories from the Geeky Robots. Noon to 6 p.m. Saturday, at Kush by Stephen's, 1000 E. 16th St., Hialeah; 305-887-8863; stephensdeli.com. Admission is free with RSVP via eventbrite.com. Olivia McAuley

Pérez Art Museum Miami will host its eighth-annual Art + Soul benefit, which will take place virtually this year, on Saturday. The benefit's mission is to raise money for the museum's Fund for African American Art to aid in the purchase of works by Black artists. This year, the guest of honor is celebrity chef Marcus Samuelsson, who recently opened the American roots restaurant Red Rooster Overtown. The event will feature a live reveal of the fund's new art acquisitions and a conversation with Samuelsson, who also designed a $5,000 VIP dinner package for six. The dinner will be delivered to top-tier ticket buyers' homes along with Champagne and wine from Black-owned wineries, along with other surprises. 7 p.m. Saturday; pamm.org. Tickets cost $75 to $5,000. Olivia McAuley

Follow in the footsteps of world-champion Cassius Clay on Saturday for the American X History Fun Run organized by the Miami Athletic Association. The ten-mile course will take runners, joggers, walkers, and cyclists from the Historic Hampton House — where Clay (who changed his name to Muhammad Ali soon afterward) stayed in 1964 when he fought for a professional world title for the first time — to the Miami Beach Convention Center, the venue where he beat Sonny Liston to win that title. If you're feeling a little less ambitious when it comes to distances, head to Fight Club (120 NW 20th St.) to get a head start. 6:30 a.m. Saturday, at the Historic Hampton House, 4240 NW 27th Ave., Miami; 305-638-5800; historichamptonhouse.org. Admission is free with RSVP via runadic.com. Olivia McAuley

It's that time of year again: Super Bowl Sunday. If you want to go all out this year, watch the Kansas City Chiefs take on the Tampa Bay Buccaneers on 1 Hotel South Beach's rooftop for its Big Game Viewing Party. No matter who you're rooting for, you can make a night of it in your private cabana and enjoy scenic ocean views, an à la carte menu, and a live DJ starting at 10 p.m. Sky Cabana and Ultra Sky Cabana packages are available. 6 to 9 p.m. Sunday, at 1 Hotel South Beach, 2341 Collins Ave., Miami Beach; 833-625-3111; 1hotels.com. Tickets cost $3,000 to $5,000 via eventbrite.com. Suzannah Friscia

As part of its virtual author series, Books & Books hosts a live conversation between Australian novelist Robbie Arnott and Jeff VanderMeer, author of the Southern Reach Trilogy. The two will discuss Arnott's new book, The Rain Heron. The novel, which tackles myth, adventure, environmental issues, and female friendship, follows the friendship between Ren, a woman living alone in the remote wilderness in the aftermath of a coup d'etat, and a young soldier in search of a legendary bird thought to be able to change the weather. 7 p.m. Monday; booksandbooks.com. Admission is free with RSVP. Suzannah Friscia

In Renaissance Italy, some people took cues from their ancient Roman ancestors and built suburban villas to get away from the anxieties of city life. Believe it or not, said villas also became known as hotspots for debauchery and hedonism. Rocky Ruggiero, an expert on Italian Renaissance art, and Bonnie Clearwater, director and chief curator of Fort Lauderdale's NSU Art Museum, host Renaissance Pleasure Palaces, a look at the art at two of the best-preserved villas: the Villa Farnesina and the Villa Borghese. They'll discuss how many of these works, by artists including Raphael and Bernini, reflected the society and time in which they were made. 5:30 to 6:30 p.m. Tuesday; nsuartmuseum.org. Admission is free for members and $5 for nonmembers. Suzannah Friscia

Step into the creative world of London-born filmmaker and installation artist Isaac Julien on Wednesday as he sits down with the Bass' executive director and chief curator Silvia Karman Cubiñá for the latest edition of the museum's Small Talk series. The contemporary artist is best known for the 1989 film Looking for Langston, an exploration of Harlem Renaissance pioneer Langston Hughes. Since then, Julien has amassed an impressive work portfolio and was appointed Commander of the Order of the British Empire by the Queen in 2017 for his artistic achievements. 6 p.m. Wednesday; thebass.org. Admission is free with RSVP. Olivia McAuley