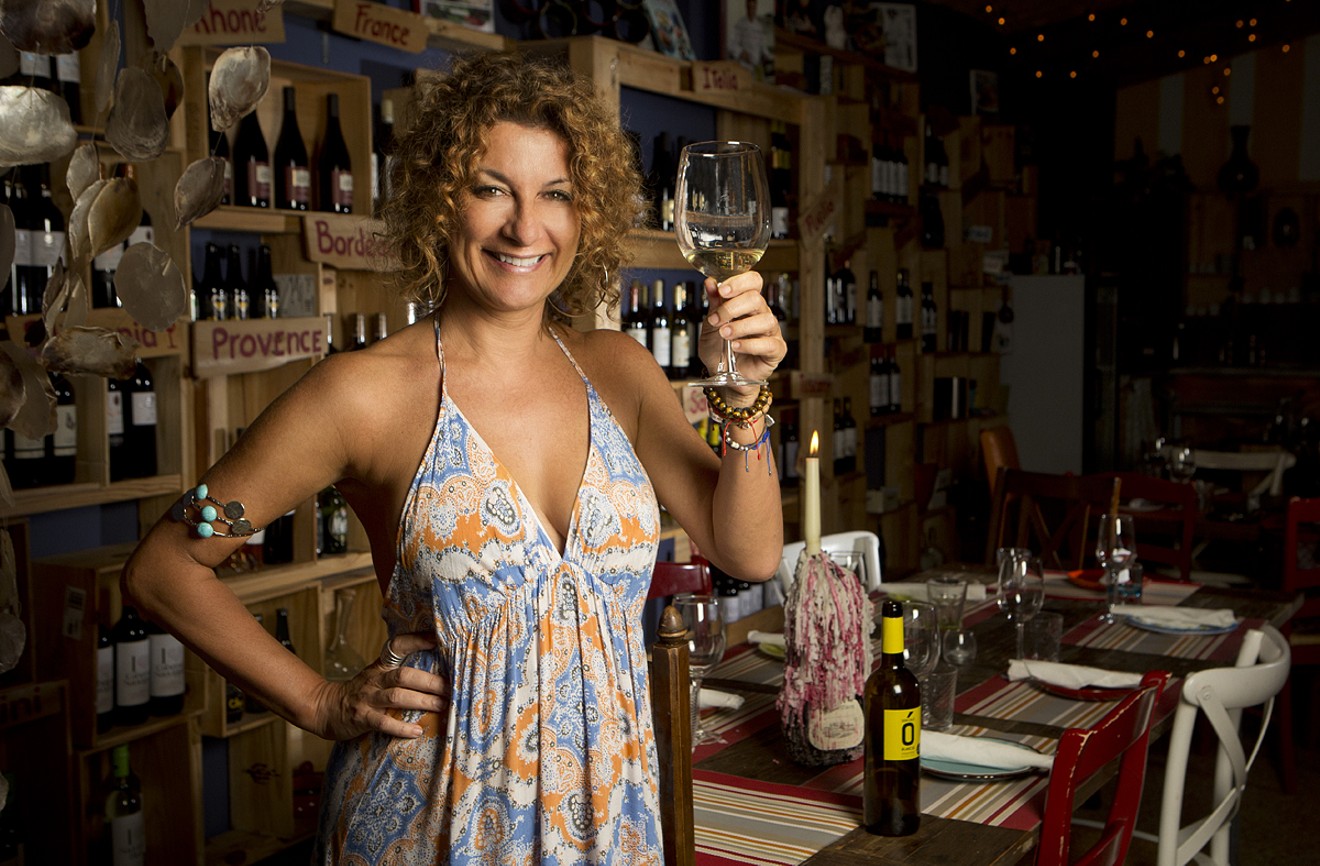 At her MiMo District restaurant, BarMeli69, Liza Meli floats among the tables while pouring wine and greeting guests with double-cheeked kisses as glasses clink and soft, romantic music fills the dining room.

Located in the former Michy's space on Biscayne Boulevard, the restaurant is a welcoming place that evokes the feeling of a distant cantina.

Inspiration for her wine bar comes from her travels. "It's the south of Spain and France and the beautiful parts of Italy and Sicily and Sardinia. When you add Greece — which is my blood — you get a piece of Europe. You can't quite place it, but you can relate to it." The attention to the region is mirrored in the wines she offers: mostly Mediterranean vintages that are biodynamic and sustainable. "I like these wines because they're clean. You can drink them and you won't get headaches."

Meli, a native Australian with Greek roots, found herself lacking a comfortable space to call her own in Miami. "I just wanted a place where I could hang out, not break the budget, and meet some new, interesting people. So I invented one."

Though the curly-haired beauty danced for and was married to flamenco guitarist Alex Fox for 20 years, Meli says she was sure the hospitality business was her future when she began working in a restaurant as a teenager. "At 15, I knew this was my calling," she says. In 2002, Meli separated from Fox and opened her first restaurant, Ouzo's Greek Taverna in North Beach, with her brother Johnny.

Liza went on to open and close a few restaurants before striking gold with the original BarMeli in a strip mall on 79th Street in 2013. "I created something from nothing, and it worked," she says. "The beauty of being the little guy is that there are no expectations."

In a few short years, she's seen the MiMo District transform into a foodie destination. "There were almost no restaurants here, and now you can get Italian, Vietnamese — so locals don't need to go anywhere. They can stay right here." Meli says that even though her rent has increased, she doesn't plan to move to another neighborhood. "It's the clientele. If I go to Aventura, I'll lose them. We've become friends over the years. I don't have a choice. I have to stay here."

Still, she has to keep on her toes. "You gotta work it. No one gives you a second chance. You're as good as your last dish. That's all people remember."

Meli takes great enjoyment in playing host at her restaurant. She's known to pour an extra bit of wine in a glass or take out a bottle of after-dinner limoncello. "Basically, all I do, which is probably not very smart in a business sense, is treat people like they were in my home." She laughs while mentioning that her management style has gotten her in some hot water with accountants who would prefer she spent more time on exact pours and inventory.

Meli, however, sees her wine bar and restaurant as more of an extension of her lifestyle than a means to attain wealth. "If anyone gets into this business to make money, they're crazy."