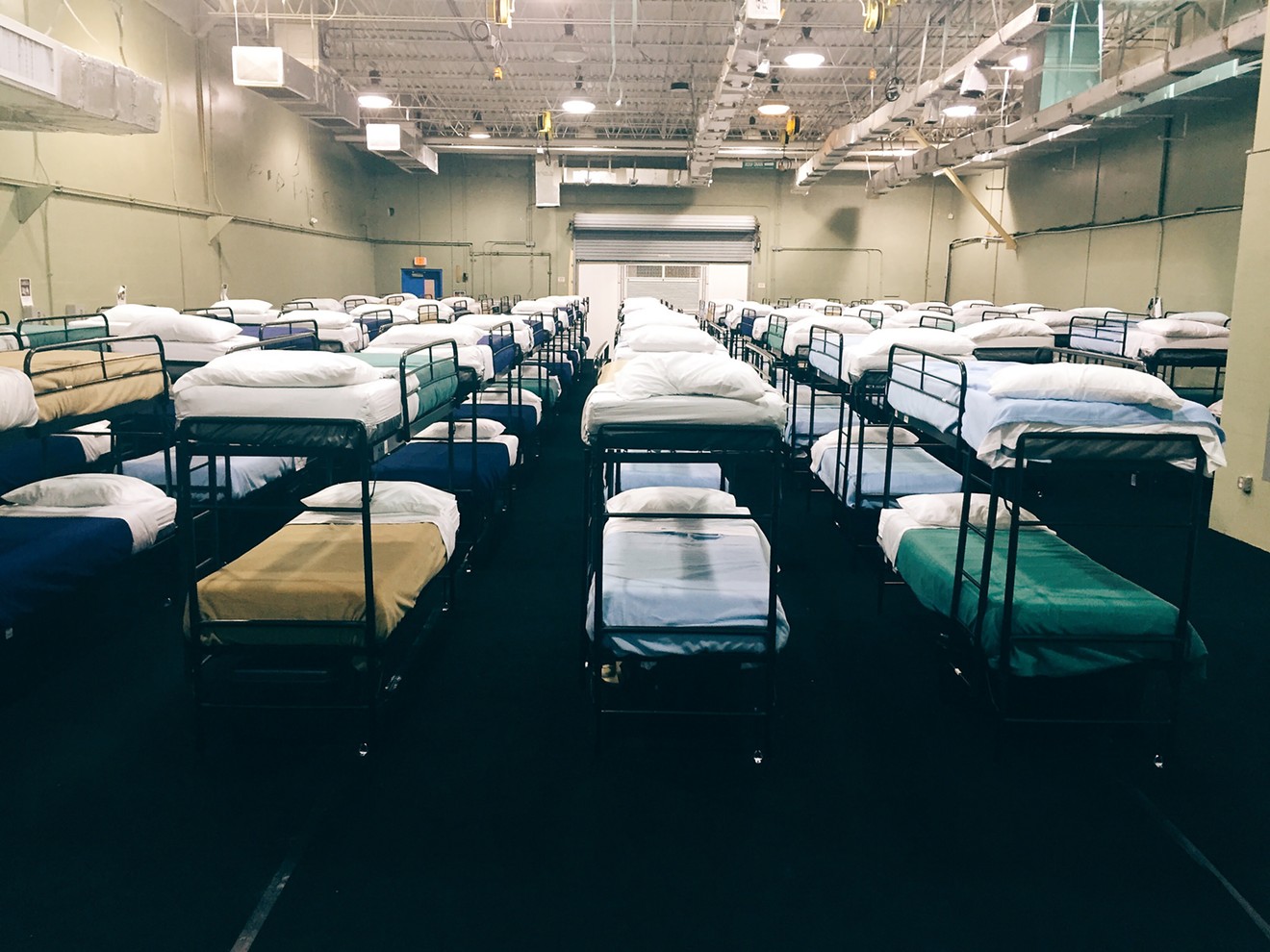 U.S. Department of Health and Human Services / Flickr
One of the less reported aspects of the United States deportation system is its profitability. Private, for-profit companies and contractors are paid billions of dollars to carry out the Trump administration's will. In short: People are getting rich by keeping immigrant kids behind bars.

Last year, New Times reported the Trump administration had quietly reopened the Homestead Temporary Shelter for Unaccompanied Children. Since then, the facility has filled with as many as 1,300 kids. The feds plan to add 1,000 more children by the end of the year, according to the Associated Press. That's obviously bad for the kids. But it's good business for these companies:

1. Comprehensive Health Services got a fancy tax-incentive package from the State of Florida after paying out a $3 million medical-fraud settlement.

In Homestead, a federal compound housing as many as 1,000 migrant children is managed in part by a federal contractor based in Cape Canaveral called Comprehensive Health Services, which has held a contract at the Homestead camp since February 2018. Sen. Bill Nelson says 94 children at Comprehensive Health's facility have been taken from their parents by U.S. immigration agents.

According to a New Times review of past state documents, that contractor is operating in the Sunshine State thanks to a handy assist from Gov. Rick Scott's administration. In December 2016, Comprehensive Health announced a new project that would "create 150 new jobs" at its Cape Canaveral headquarters — and in exchange, the state in July 2017 awarded the company a $600,000 "qualified target-industry" tax-incentive package.

But just as Scott was negotiating that tax break, Comprehensive Health was hashing out a deal with the feds to pay a $3.8 million settlement to the U.S. Department of Justice over a medical-fraud claim. After Comprehensive Health paid the fine in February 2017 (without admitting any wrongdoing), Florida gave the company the tax breaks anyway.

As lawmakers such as Nelson have put pressure on Scott, a Trump ally, to take a stand on the facility, the governor's involvement with Comprehensive Health complicates matters. In December 2016, Scott cheered the company's expansion in Florida.

"I am proud to announce that Comprehensive Health Services Inc. has chosen Florida over Virginia for their expansion, which will create 150 new jobs," Scott said that year. "I look forward to seeing CHSi’s growth in Florida and we will continue to do all we can to cut taxes and reduce burdensome regulations so more businesses can succeed in our state.”

It turns out Scott issued that celebratory news release while the company was fighting medical-fraud complaints in federal court. The DOJ alleged Comprehensive Health had double-billed the federal government for medical services the contractor performed while giving screenings to Internal Revenue Service agents. A whistleblower, James J. Kerr, had accused the company in court of double-charging taxpayers for vision screenings, resting electrocardiograms, and the collection of blood specimens, among other procedures, from 2009 through 2014.

“Businesses that knowingly overcharge the government should be held accountable and penalized,” U.S. Attorney Rod J. Rosenstein said in a news release after Comprehensive Health paid its settlement in February 2017. “Whistleblower lawsuits are a valuable tool to deter fraud and punish perpetrators.”

The Scott administration finally awarded the $600,000 tax package July 17, 2017, five months after the company paid its DOJ settlement. Comprehensive Health did not admit any wrongdoing while paying the fine, and the feds noted "there has been no determination of liability" to go along with the financial settlement.

In late December, the feds told the Associated Press that the Homestead Temporary Shelter for Unaccompanied Children, a migrant camp holding 1,300 immigrant children outside of Miami, would add 1,000 extra beds sometime in 2019.

While immigrant-rights groups maintain the facility is a humanitarian nightmare — one family that spoke to New Times said their loved one there was trapped in a "child prison" — the news is great for private contractors. It appears the government has begun handing out new contracts. On December 22, the federal Office of Health and Human Services awarded the Calfornia company American Canyon Solutions a brand-new, $60.5 million deal for "facility management services" at the compound. The federal government has so far forked over $10 million of that amount.

The group advertises itself online as "one of the nation’s largest, most progressive and prominent emergency and disaster preparedness contractors."

(The Herald has previously reported that a third contractor, General Dynamics, was in May awarded a $1.6 million contract to help provide "training and technical assistance" at the facility.)

The government is likely to soon send even more money to Comprehensive Health, as the company's current contract only covers 1,300 beds. In 2015, when the Obama administration opened the facility as a spillover site for unaccompanied kids housed at the border, the feds handed Comprehensive Health a whopping $388 million contract. However, the Obama administration shut the facility down before the government paid the full amount.


3. Detainees are being sent to a GEO Group immigrant-detention facility on their 18th birthdays.

When one of his abusive mother's gangbanger friends held a gun to his chest and threatened to pull the trigger, Nolbiz Orellana knew he'd die in Honduras. So this past January, the then-17-year-old made the harrowing journey to the U.S.-Mexico border, crossed over, and asked for asylum.

Instead of releasing him to his relatives in Nebraska, though, the feds sent him to the Homestead Temporary Shelter for Unaccompanied Children. Orellana spent three months in the remote South Miami-Dade facility until April 8 — his birthday.

That's when Immigration and Customs Enforcement agents showed up at the children's shelter, slapped handcuffs on Orellana's wrists, chained them to his waist, and shackled his legs together. The agents drove Orellana to the Broward Transitional Center, an infamous immigration jail in Pompano Beach, where he was thrown into a cell with men twice his age.

Orellana's saga isn't just shocking — it's also illegal, say Miami immigration attorneys who have succeeded in forcing ICE to release several other 18-year-olds in recent months. Even worse, they say what happened to the Honduran refugee seems to have become ICE's national policy.

"When they turn 18, it's basically, 'Happy birthday,' and then they slap on handcuffs and take them off to adult detention centers," says Lisa Lehner, an attorney with the nonprofit Americans for Immigrant Justice who is representing Orellana.

Since April, at least 14 children at the Homestead center have been handcuffed on their 18th birthdays and taken to a jail cell in Broward, Lehner says. And at least one of those kids had been separated from his father under the Trump administration's since-abandoned policy to rip apart families that crossed the border together.

Lehner and her colleagues have filed seven lawsuits since early July on behalf of those 18-year-old immigrants. In five of those cases, ICE has quickly released the immigrants to relatives or guardians while their cases work through the courts. (Two cases are still pending, and Lehner expects to file several more in the coming weeks.)

"We've been successful in filing these petitions and getting ICE to act, but it would be much better if ICE would just stop this process in the first place," Lehner says. "The law is crystal clear."


4. Now, a company once associated with former White House Chief of Staff John Kelly has bought Comprehensive Health and wants to make a boatload of money in the stock market.

The Trump administration's family-separation and child-immigrant-detention policies have forced innocent children into horrid, inhumane conditions and, in some cases, have violated international law.

But housing immigrant children has been extremely lucrative for the private contractors running detention facilities. In fact, one Florida company operating at the Homestead Temporary Shelter for Undocumented Children is making so much money off detained kids that it's part of a planned $100 million initial public offering, according to SEC filings reviewed by New Times.

That firm is Comprehensive Health Services, one of the main contractors running Homestead's migrant camp. Comprehensive Health, which was founded in 1975 and is based in Cape Canaveral, holds a federal contract for work at the camp that could be worth as much as $200 million this year. But last year, a larger corporation, Caliburn International LLC, bought Comprehensive Health, and now Caliburn is angling to go public on Wall Street and rake in cash.

To make matters even more interesting: Caliburn was apparently formed by none other than D.C. Capital Partners, a private equity firm that, as of 2017, employed former White House Chief of Staff John Kelly as a lobbyist through a subsidiary. The Intercept reported in January 2017 that D.C. Capital had paid Kelly $37,500 and that he had failed to disclose the payments on government forms. After that news broke, Kelly announced he was severing ties with the company.

The stock filing is certain to elicit debate about the role private government contractors hold in the Trump administration's deportation and immigrant-detention machine. The news also raises questions about the ways former government and military officers are profiting off detention policies they helped create.

Spokespeople for Caliburn did not immediately respond to a message from New Times. But the news has been hiding in plain sight or months: Numerous stock blogs announced Caliburn and D.C. Capital's plans this past October. But no media outlet has reported that Caliburn's portfolio of companies includes Comprehensive Health or that the company has clear ties to Kelly. The founder and managing partner of D.C. Capital, Thomas J. Campbell, is also Caliburn's chairman.