A Month After Irma, Miami-Dade's Sex Offender Camp Is Still There

Photo by Isabella Gomes
Beneath a shredded blue tarp, 58-year-old Claudia Baker takes a swig from a can of A&W root beer. "Imagine your faucet dripping at night. That's what life is like for us — except instead of just hearing the drip, we feel it," she says.

After serving nine years in prison for child pornography, Baker now lives at an encampment of sex offenders next to train tracks near Hialeah. There, residents sleep on wet cots, endure massive storm floods, and openly defecate behind a storage container. Nearby business owners say the offenders have scared away customers. "My dog in Texas lives better than I do," Baker says.

Because of a 2005 county law, sex offenders in Miami-Dade are prohibited from living within 2,500 feet of any school, daycare center, or park — a restriction that essentially banishes them into homelessness. After New Times chronicled their conditions in August, Homeless Trust Chairman Ron Book declared the site a "health crisis" and announced the county would shut it down as soon as possible.

However, two months later — even after Hurricane Irma tore through and flooded the site — the camp is larger than ever. Why? Book says he's working on closing it but needs more time.

"It'll be sooner rather than later," Book says of when the sex offenders will be relocated. 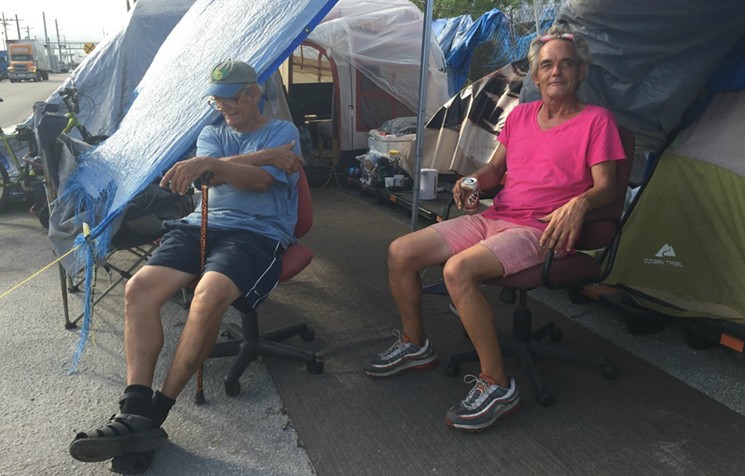 Eladio Morales (left) and Claudia Baker
Photo by Isabella Gomes
The County has struggled to find a permanent home for sex offenders since passing its restrictive laws in 2005. For years, dozens lived under the Julia Tuttle Causeway until a national outcry erupted over the situation; they were shuffled around the county and by 2014 ended up next to the railroad tracks near Hialeah. As of August, 233 sex offenders are registered to the area of NW 71st Street and NW 36th Court. Eighty-eight are on probation with ankle monitors tracing their movement.

Despite Book's promises in August to close the camp, dozens of sex offenders still lived there a month later when Hurricane Irma struck Miami-Dade. Police forced the offenders to evacuate, Baker says, and many fled to shelters, including Baker, who hunkered down with 2,000 other people in the gym of Miami Central Senior High School on NW 95th Street.

Upon returning to the encampment, Baker found that her cot, tent, and rubber pallets had become wet and mosquito-infested. So she slept in her moist, molding tent while rats scurried beneath the rubber pallets. "The rats... they're big suckers," says 72-year-old Eladio Morales, who began living at the encampment only two days after Irma hit the area. "That's why I don't sleep on pallets. I'd rather sleep on the ground."

Since the hurricane, residents say persistent storms and showers have flooded the premises, ripping tents from the ground. "One tent ended up on the other end of the railroad track," Morales says, resting his arthritic legs.

A few former camp residents have been relocated since August. Baker says three offenders have been moved to real housing. Among them is 49-year-old Brett Borges, who once solicited nude photos and sex from an undercover cop posing as a 15-year-old on Grindr. He says he's found an apartment near 81st Street and Biscayne Boulevard.

Photo by Isabella Gomes
Hundreds of other offenders remain at the camp. "Ron Book keeps telling us he's shutting [the camp] down, but he won't give us a date," Baker says. "When this is happening [and] where we're going, we don't know."

Book says, "It will happen, but we haven't set a date."

Where exactly will the offenders be relocated? "No comment," he says. "But they've had ample time and opportunities to seek housing alternatives."

Baker says that in the meantime, residents have tried to make the camp more livable. They've acquired heavy-duty generators, a portable shower, a microwave, a speaker system, and a wide-screen TV and have used waterproof camping tarps, sheets of industrial-grade plastic, and even large event-style canopies to reinforce the tents. The additions, however, have only pushed the encampment's boundaries farther into the street, where tractor-trailers and pickups regularly drive.

"That's what we're afraid of," says Mary Grafton, whose family owns a custom-furniture factory two blocks down the street. "The county said they'd clear out the camp, but it's only getting bigger. Now there's more tents and more tarps, but still no one's picking up the garbage."